What is the European Statistical System (ESS)?

The list above is published for information only in accordance with Article 5 (2) of Regulation (EC) No 223/2009 of the European Parliament and of the Council of 11 March 2009 on European statistics (OJ L 87, 31.3.2009, p. 164). It will be updated regularly as per the Member States' requests. Where necessary, the names of the national statistical institutes and other national authorities have been translated into English by Eurostat.

Procedure to update the list of other national authorities

The EU Member States and EFTA countries collect data and compile statistics for national and EU purposes. The ESS functions as a network in which Eurostat's role is to lead the way in the harmonisation of statistics in close cooperation with the national statistical authorities. The work of the ESS concentrates mainly on EU policy areas, but with the extension of EU policies harmonisation has been extended to nearly all statistical fields.

The ESS also coordinates its work with candidate countries and at European level with other Commission services & agencies, the ECB and international organisations such as the OECD, the UN, the International Monetary Fund and the World Bank.

The government has appointed Franziska Frick as Head of the OSL starting from 1 July 2022. The previous head, Andrea Scheller, has left the Office for Statistics at the end of June 2022.

Franziska Frick has worked for the Office of Statistics since 2009. She has in-depth professional knowledge and thanks to her previous responsibilities in various areas of the office, she can draw on extensive experience. She was now responsible for the establishment and further development of statistics in the area of health. Since 2018, she has also held the position of Head of Division for Registers and was in charge of the Liechtenstein Business Register.

She studied social work and social policy at the University of Fribourg (CH) and holds a doctorate in media studies. After her studies, she worked for several years at Swiss Television as Deputy Head of Market and Audience Research.

The official statistics portal of Liechtenstein was launched on 23 June 2022. It was developed to enhance user-friendliness through increased data visualisation, interactive tools and easier searchability.

You are welcome to give feedback and make suggestions at info.as@llv.li.

The Commission adopted the 2022 Financing Decision and Work Programme on 17 February 2022.

Statistics Poland has published the preliminary results of the National Population and Housing Census 2021. 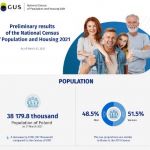