by Linda McAvan, Member of the European Parliament, Rapporteur on the Tobacco Products Directive

A little over a year ago the new Tobacco Products Directive (TPD) entered into force. The Directive is a major achievement for public health in the EU, in particular as regards the protection of young people. As its provisions start to be implemented across EU countries over the coming months, we will see major changes in the type and packaging of tobacco products available on the EU market. The TPD prohibits strong flavours such as fruit or menthol in cigarettes and roll-your-own tobacco. It requires that cigarette packages carry big pictures and text warnings that remind consumers of the risks of smoking and bans the use of misleading terms such as ‘organic’ or ‘natural’.

The Directive also introduces measures to combat the illicit trade of tobacco products. New provisions for nicotine-containing electronic cigarettes will ensure that these products are safer and of better quality, and properly labelled.

A lot has happened in the past year. The European Commission is currently working on the detailed technical rules needed to implement the TPD. These include the methods to determine strong flavours in tobacco products, the appearance of the new health warnings and rules for e-cigarette refills. These rules should be in place before the transposition deadline of May 2016. A lot of work is also on-going in Member States to ensure timely transposition of the Directive.

Meanwhile, the Directive has already been challenged in court by both the tobacco and e-cigarette industry as well as by one Member State. The European Parliament and Council are working together, with the help of the Commission, to ensure that the rules agreed by the co-legislators are upheld in Court and that the internal market and public health benefits of the new Directive are not lost.

Encouragingly, a number of Member States (France, Ireland and the UK) have signalled their intention to go further and introduce fully standardised packaging. Like Australia before them, these countries are committed to ensuring that tobacco companies do not use packaging to entice young people to use their products. They are frontrunners in the protection of young people and citizens from the harmful effects of smoking. Smoking prevalence has been falling in the EU over recent years. The TPD will reinforce that trend and mean even fewer young people will be attracted to start.

The new Eurobarometer, published 29 May, reveals that fewer people in the EU are lighting up compared to three years ago, but 12% of Europeans, mainly young people, have at least tried e-cigarettes.

The stricter requirements for the manufacture, presentation and sale of tobacco and related products came into force last year. Member States and the European Commission are working together to ensure that the Directive is implemented by May 2016.

Ireland, France and the UK, and Norway outside the EU, are the first countries in Europe to announce the introduction of plain, standardised packaging for tobacco products.  Ireland (see link) was the first country in the EU to take this positive step.

Organised by the WHO, this annual event advocates policies to reduce tobacco use and raise awareness that it is the single most preventable cause of death globally, responsible for 10% of adult deaths worldwide. This year's theme is the illicit trade of tobacco products.

A third of the users of the previous iCoach stopped smoking after three months. With new, improved functions, this online and mobile tool should help even more smokers call it quits.

With this info-graphic it's easy to get the picture: smoking kills 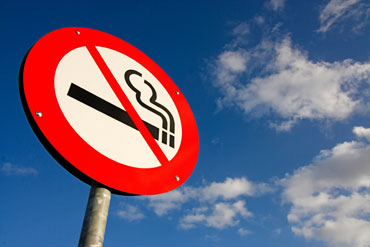 'Thick air', by Tobias Zick, winner of the 2012 special prize on "smoking cessation"

This article presents a comprehensive overview of tobacco use and smoking cessation issues in Germany, covering history, politics, law and philosophy.

Pricing Policies and Control of Tobacco in Europe