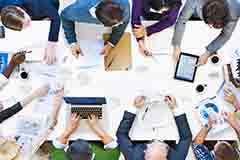 What is the EU Labour Force Survey?

The EU Labour Force Survey (EU-LFS) is the largest European household sample survey. Its main statistical objective is to classify the population of working age (15 years and over) into three mutually exclusive and exhaustive groups: employed persons, unemployed persons (both together make up the so-called ‘labour force’) and the population outside the labour force, for example students, pensioners and housewives or –men.

Eurostat currently publishes EU-LFS results for 35 participating countries. These countries are the Member States of the European Union, the United Kingdom, three EFTA countries (Iceland, Norway and Switzerland), and four EU candidate countries (Montenegro, North Macedonia, Serbia and Turkey). The EU-LFS provides quarterly and annual data; depending on the labour status of the people (employed, unemployed, outside the labour force) different variables are collected.

How are data collected?

Participating countries are responsible for collecting the data. They provide to Eurostat data from their national labour force surveys. Each quarter, more than 1.7 million interviews for around 100 variables are conducted. The EU-LFS data collection is carried out mainly through four modes: personal visits, telephone interviews, web interviews and self-administered questionnaires. The majority of participating countries use only computerised questionnaires.

To ensure that the statistical results are comparable across countries and over time, the EU-LFS:

Why are labour force data needed?

The EU-LFS is an important source of information on the situation and trends of the EU and national labour markets. It helps to monitor the main European policies and strategies for employment, like the EU2020 employment rate targets, and the European Employment Strategy, including the Employment Guidelines.

In addition, the EU-LFS forms the basis for the EU's monthly harmonised unemployment rate, one of Eurostat's key short-term indicators. Due to the diversity of information available and its large sample size, the LFS is also an important source of information for other European statistics, such as education or regional statistics.

For a detailed overview of the EU-LFS, please see our dedicated article 'EU Labour Force Survey' in Statistics Explained. 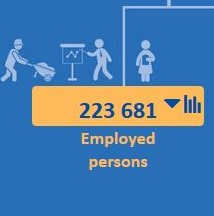 Find out about your country's labour market

Do you know how many persons in your country are employed, unemployed or economically inactive? How does this compare to other European countries? Find out using our interactive visualisation.

How has the unemployment rate in your country developed over the last months? Is it below or above the EU or euro area average?

Dig into statistics for your region & city

With the help of our infographics in this Statistics Explained article, you can see movements of people between employment, unemployment and economic inactivity from quarter to quarter.

Find out when our newest quarterly LFS data will be published.

Looking for other labour market data such as earnings or labour cost? Then check out our complete range of labour market statistics.