A new version of the Online Manual has been published for all funding programmes 2021-2027 managed through the Funding & Tenders Portal. Click here to access it.

From now on, parties to Horizon 2020 grant agreements are to sign electronically at the Funding & Tenders Portal. This requires

The chain of trust

The LEAR provides reliable information on behalf of the beneficiary to the Commission or the agency concerned. He or she appoints on the Funding & Tenders Portal individuals authorised to sign:

The LEAR updates these lists constantly.

Each individual must have a personal EU Login account.

Watch also the video about the 'eSignature of grant documents' 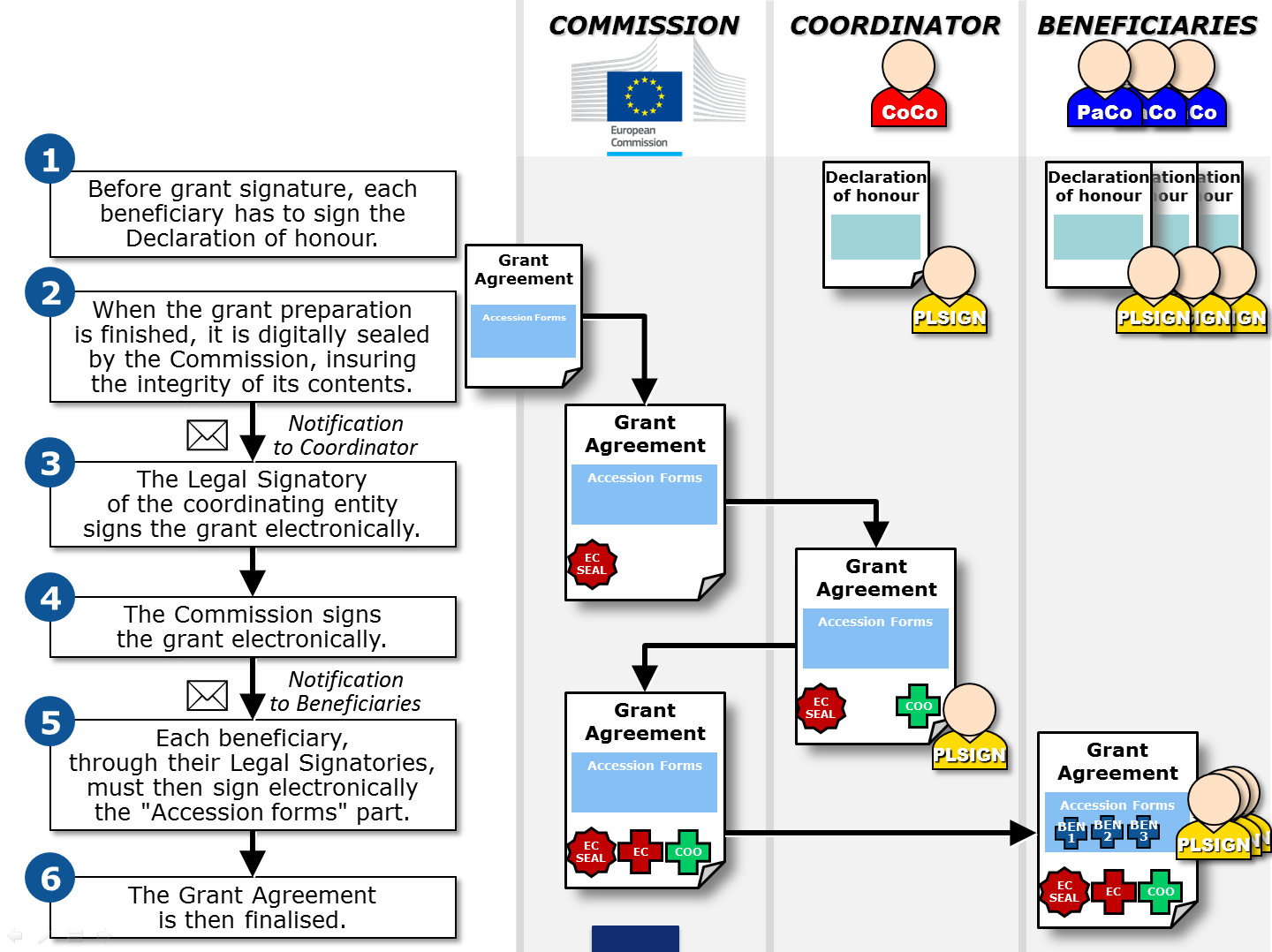 Grant agreement is ready for signing

The Commission prepares the grant agreement for signing. A PDF document, digitally sealed to guarantee its security, reliability and authenticity, is made available through the Funding & Tenders Portal's electronic exchange system (My Area).

While a grant agreement is being drawn up, each beneficiary selects one or more legal signatories for the project and any of them can sign online.

The Commission or agency usually signs the grant agreement after the coordinator has signed.

Coordinator signs the grant agreement electronically
Commission signs the grant agreement
How is the starting date of my project calculated?
The starting date of the project is usually the first day of the month following the date when the GA enters into force. The GA enters into force when the last party of the following two – Coordinator or Commission/Agency - signs it. It is usually the Commission/Agency who signs last, which also means that the starting date is not defined by the signature of the Accession forms by all participants.
See details in the Annotated Model Grant Agreement: Article 3-Action starting date, Article 58-Entry into force.
Participants sign the Accession forms
Grant Agreement is finalised

The relevant contact persons of the coordinating organisation (CoCo, LEAR) and of the concerned participant (PaCo, LEAR) are notified when an accession form has been signed.

Task of the linked third party

Task of the beneficiary

If joint and several liability has been requested but the declaration is not submitted as described above, the beneficiary will not be considered to be a party to the grant agreement. This will be dealt with as though the accession form had not been signed.

If the JRC is a beneficiary, it must sign Annex 3b (not Annex 3) as its accession form. The JRC and the Commission must sign the administrative arrangement online at the time of grant signature.