How satisfied are you with your job? - Products Eurostat News

null How satisfied are you with your job?

Print How satisfied are you with your job? 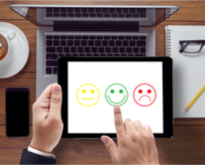 In 2015, the highest proportion (85 %) of city-dwellers who were satisfied with their personal job situation was recorded in Graz (the second largest city in Austria), while relatively high degrees of satisfaction were also recorded in the Austrian capital of Wien (79 %), the Danish capital of København (78 %), the western French city of Rennes (also 78 %) and the Belgian capital of Bruxelles/Brussel (77 %). By contrast, the lowest level of satisfaction (44 %) was recorded in the heavily industrialised city of Miskolc (north-east Hungary), while the Greek capital of Greater Athina (45 %) and the Hungarian capital of Budapest (49 %), along with Piatra Neamț (eastern Romania; also 49 %) were the only other cities where less than half the population declared they were satisfied with their personal job situation.

The source dataset can be accessed here.

The cities, towns and suburbs in the EU provide a high proportion of the total number of jobs that are available in the economy at large. When asking the city dwellers, the respondents are most likely to agree that it is easy to find a job in Praha (72%), Cluj Napoca (67% agree), Munchen (62%) and Bratislava (62%). At the other end of the scale, there are 10 cities where more than 8 out of 10 respondents disagree with this statement. Respondents are most likely to disagree in 3 Italian cities: Palermo (96%), Napoli (93%) and Torino (85%), as well as in Greek greater city of Athina (85%) and Spanish Málaga (85%).

Further information can be found in the Statistics Explained article on working in cities.