null 43% of births in the EU are now outside marriage

Print 43% of births in the EU are now outside marriage 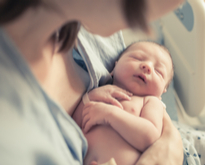 The proportion of live births which occurred outside marriage in the EU stood at 43 % in 2016. This is just over 15 percentage points above the value in 2000. From 2000 the share steadily increased by around 1 percentage point each year, signalling changing patterns of family formation, with births occurring in non-marital relationships, cohabiting couples and to lone parents. 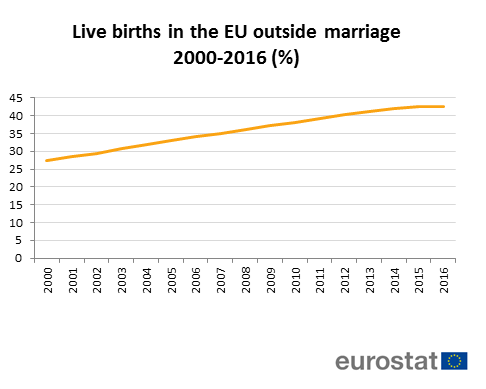 In eight EU Member States in 2016 there were more live births registered outside marriage than within marriage: France (60 %), Bulgaria and Slovenia (both 59 %), Estonia (56 %), Sweden (55 %), Denmark (54 %), Portugal (53 %) and the Netherlands (50 %). In contrast, more than 80 % of live births in Greece, Croatia and Cyprus were registered within marriage. Between 2015 and 2016, extramarital births increased in almost every EU Member State with the exception of Estonia, Italy, Latvia, Lithuania, Hungary and the United Kingdom. In Bulgaria and Ireland there was no variation. In the EFTA countries Switzerland and Liechtenstein, the proportion of births outside marriage in 2016 was below 25%, in contrast to Norway (56%) and Iceland (70%). 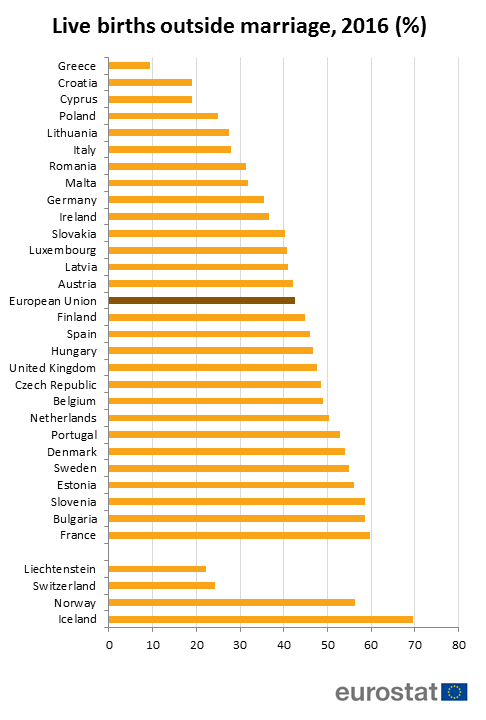 The source data set is in the Eurostat online database, code: demo_find

Further information on this topic can be found in the Statistics Explained article on the Eurostat website.