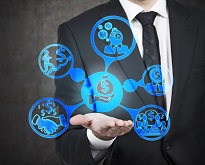 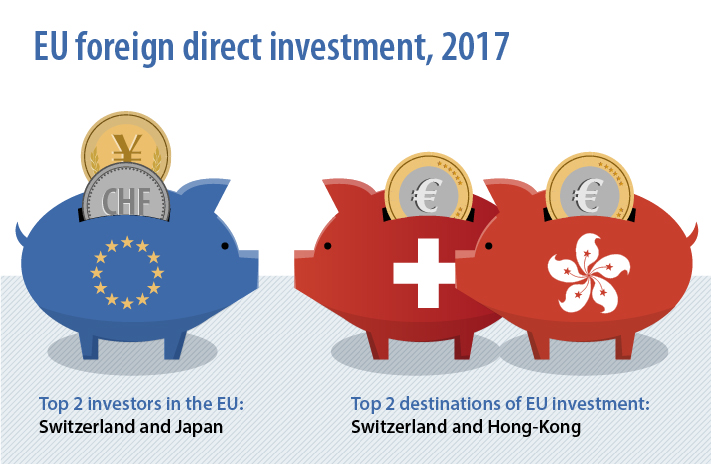 The 2017 preliminary results highlight a massive net disinvestment of US companies into the EU market. EU direct investors also reduced their net acquisitions in the US market, although less markedly.

The preliminary estimates shows that US firms withdrew nearly €-274bn of net FDI capital from the EU market. This alone caused the overall downward trend of FDI flows into the EU. Similarly, EU direct investors withdrew from the US market, with a net disinvestment of around €-67bn.

Switzerland was the EU’s main direct investor in the EU and most of the EU’s FDI net acquisitions abroad were made on the Swiss market.

Amounts invested in the EU by other FDI partners were limited, according to the preliminary 2017 data. Only Japan (€13bn) and Canada (€11bn) made direct investment of more than €10bn each.

Hong-Kong absorbed more than €10bn of FDI capital from EU direct investors, more or less the same amount as in 2016. It is worth noting that in 2017, EU companies reduced their investment into Russia (-€7 bn). 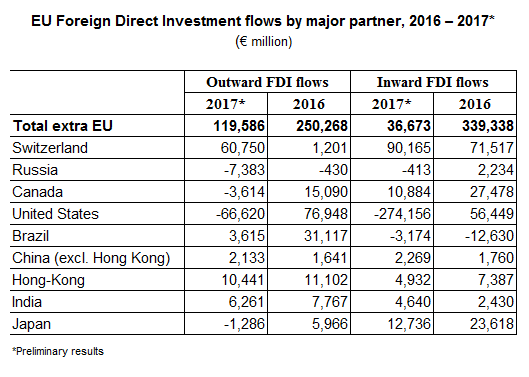 The quarterly FDI assets and liabilities, from which annual FDI flows are derived, can be found here .

The FDI figures presented here are estimates based on the latest quarterly data transmission by the EU Member States, from which the annualised assets and liabilities have been allocated according to the directional principle (outward or inward). 2017 detailed and revised annual FDI data will be published by Eurostat in December 2018.