Resource productivity in the EU economy has increased by around 35 % since the year 2000.

Resource productivity of the EU and across Member States over time

Resource productivity is measured as gross domestic product (GDP) over domestic material consumption (DMC). The latter measures the total amount of materials directly consumed in an economy by businesses for economic production and by households. The former is a basic measure of the overall size of a country's economy. Two different versions of GDP are used in this article: 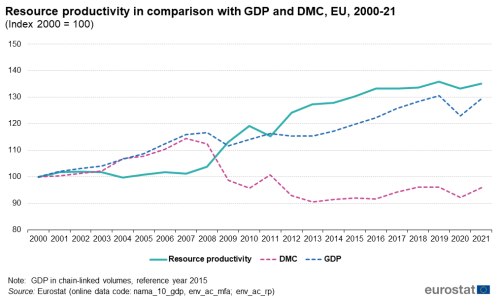 Since 2000, the resource productivity of the European Union (EU) economy increased by around 35 %. This growth happened mainly with and after the global financial crisis 2007-2008, while before resource productivity had remained rather stable. The COVID-19 recession caused a moderate decrease between 2019 and 2020 (see Figure 1).

An analysis of the resource productivity components, namely GDP and DMC, helps to explain these developments. Before 2007-2008, GDP and DMC had been growing almost in parallel resulting in a more or less stable resource productivity. Between 2008 and 2016, the two components decoupled, i.e. developed in reverse directions. Since 2016, both components seemed to re-couple again, i.e. show rather parallel annual change patterns.

The global financial crisis in 2007-2008 had a very different impact on the resource productivity of the EU than the COVID-19 recession. While the former triggered a significant growth in resource productivity, the latter caused a moderate decrease, which, however, remained less pronounced than the GDP fall between 2019 and 2020. During the global financial crisis and the following years, the consumption of materials – in particular for construction, i.e. gross capital formation – dropped much more than the GDP and stayed at low levels until 2016. On the other hand, the COVID-19 pandemic caused a much more significant shrinking of the EU economy compared to the global financial crisis, while material consumption decreased moderately, in particular because the consumption of construction material and biomass almost remained unchanged. 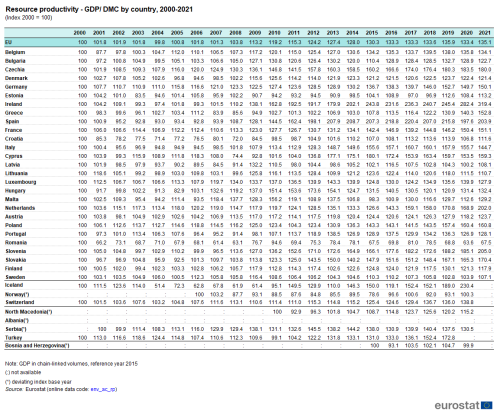 Expressed in GDP in PPS over DMC, the resource productivity amounts to 2.30 euro/kg for the aggregated EU economy in 2021. The ratio varies considerably across EU Member States from less than 1 €/kg in Bulgaria and Romania to more than 3 €/kg in France, Ireland, Italy, Luxembourg and the Netherlands (see Table 2). 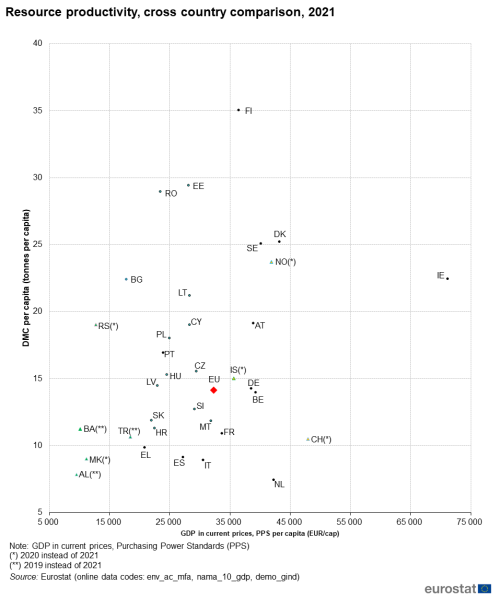 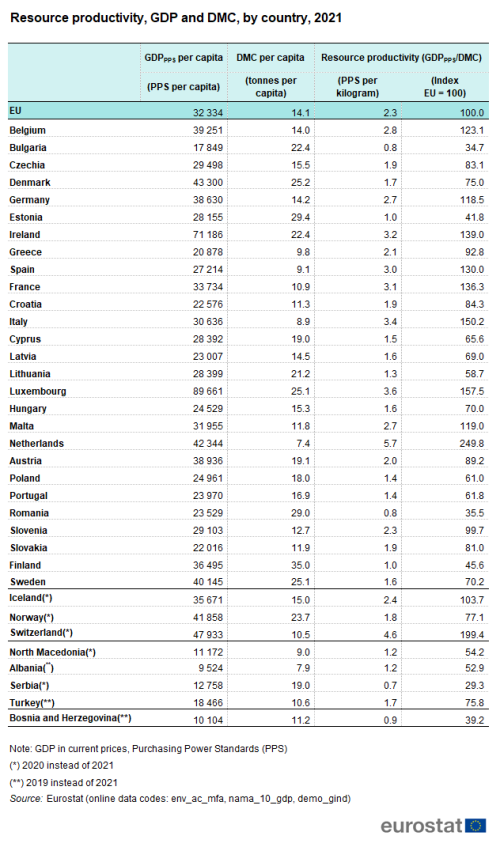 Looking at the long term change rates of DMC and GDP provides an insight on the degree of decoupling between DMC (pressure on the environment) and GDP (economic growth). Figure 3 illustrates how far decoupling has been achieved in the EU economy. The diagonal line represents identical change rates of both GDP and DMC. Countries which find themselves above this diagonal line had higher DMC growth than GDP growth and did not de-couple the two. Below the diagonal line are all countries whose GDP increased faster than their DMC and which thus achieved at least relative decoupling. Absolute decoupling denotes absolute decrease of DMC while GDP grows and was achieved by many European countries over the reporting period, including the EU economy as a whole.

It is important to note that this outcome should be further investigated as the economic crisis proved decisive to determine it and could also be the result of outsourcing material-intensive production to other parts of the world. However, those aspects of dislocated environmental pressures through trade are not covered by the DMC indicator. More comprehensive data which reflect materials embodied in trade can be found in Material flow accounts - flows in raw material equivalents 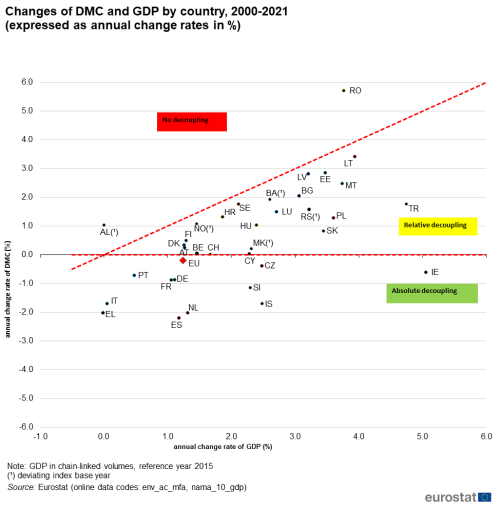 Communication and roadmap on the European Green Deal