While the European Union's (EU) trade balance in monetary values is more or less even, its physical trade balance is clearly asymmetric. The EU imports more than two times more goods by weight from the rest of the world than it exports. Quantitatively the physical imports into the EU are dominated by fossil fuels and other raw products which typically have low values per kilogram. On the other hand, the EU exports high-value goods such as machinery and transport equipment. Data on physical imports and exports are collected in the framework of material flow accounts which are presented in more detail in the article material flow accounts and resource productivity . Related articles discuss resource productivity statistics and material footprints.

In monetary terms, the EU's trade in goods is balanced; imports and exports are more or less in the same order of magnitude and both have almost doubled since the year 2000. From a physical perspective however — measured as the actual weight of traded goods — the EU’s trade pattern with the rest of the world is quite different (see Figure 1). Physical imports are almost 4  tonnes per capita while physical exports are around 1.7  tonnes per capita. 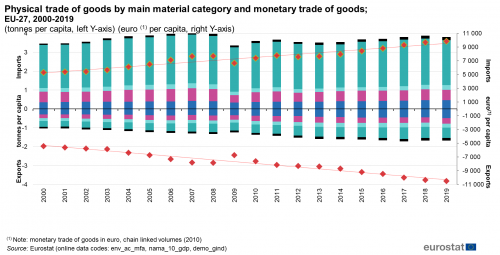 Up until the start of the financial crisis in 2008, both physical imports and exports grew, more or less, in parallel (see Figure 2). Since then, however, physical exports by and large continued their growth path while physical imports dropped and stagnated for some years. Only recently, physical imports have started to show a slight upward trend, but remain below their pre-crisis levels. 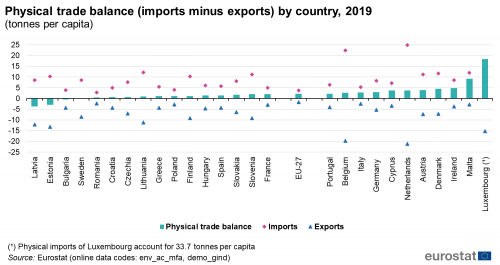 Physical trade by stage of manufacturing

Eurostat also provides data on physical imports and exports of goods in a breakdown by stage of manufacturing (see Figure 5). A distinction is made between three stages: finished products, semi-finished products and raw products. 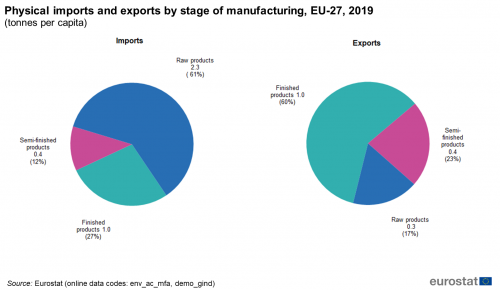 As shown above, the EU economy depends on raw materials from the rest of the world. This can be further analysed using economy-wide material flow accounts (EW-MFA). Import dependency, a metric derivable from EW-MFA, denotes the share of physical imports in the direct material input (DMI) of a given economy (the DMI comprises domestic extraction and physical imports).

The import dependency can be broken down by main material categories. Table 1 shows that the EU economy is almost self-sufficient in the supply of non-metallic minerals (construction materials) and biomass with import dependencies a bit more than 3 % and around 12 %, respectively. For metal ores as well as for fossil energy materials the EU is highly dependent on imports from the rest of the world (more than 50 % and 70 %, respectively).

Imports and exports are measured in mass weight of goods crossing the border, regardless of how much the traded goods have been processed. The total weight of raw material extractions needed to produce manufactured goods is usually several times greater than the weight of the goods themselves.

Resource efficiency means using the Earth's limited resources in a sustainable manner while minimising impacts on the environment. It allows to create more with less and to deliver greater value with less input.

The Communication "Towards a Circular Economy" further promotes a fundamental transition in the EU, away from a linear economy where resources are not simply extracted, used and thrown away, but are put back in the loop so they can stay in use for longer. It sets out measures driving a more efficient use of resources and waste minimisation.