(Redirected from Consumption of energy)

This Statistics Explained article is outdated and has been archived - for recent articles on energy see here.'

Data extracted in June 2017. Most recent data: Further Eurostat information, Main tables and Database. This article was merged in September 2018 to the article Energy statistics - an overview. 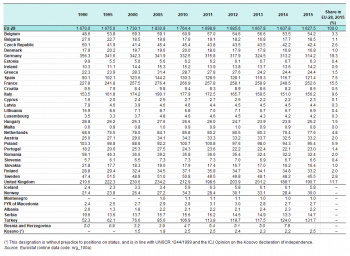 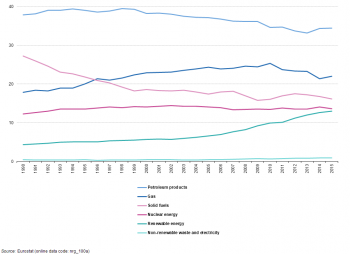 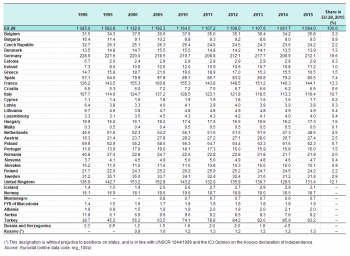 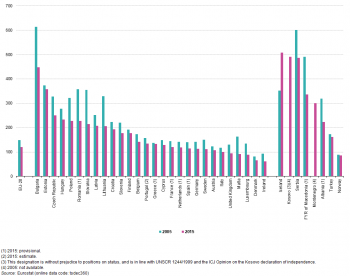 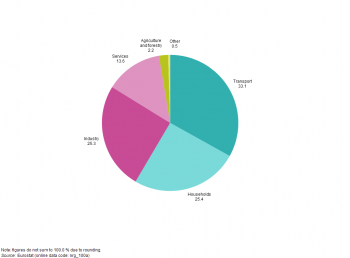 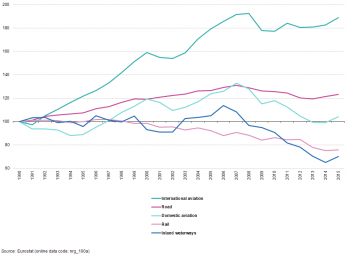 The European Union (EU) has pledged to cut its energy consumption by 20 % (compared with projected levels) by 2020. This article describes how the consumption of energy in the EU-28 has developed in recent years, highlighting a shift from fossil fuels to renewable energy sources, such as hydropower, solar energy, wind power and biofuels; it also looks at the development of energy use by various transport modes.

In tandem with supply-side policies, the EU has launched a number of initiatives which aim to increase the efficiency of energy use, reduce energy demand and attempt to decouple it from economic growth. Several instruments and implementing measures exist in this field, including the promotion of co-generation, the energy performance of buildings (whether private or public buildings), and energy labelling for domestic appliances.

As such, the latest information available reveals that the level of energy consumption within the EU was, in 2015, at almost the same level as it had been in 1990; during this same period, the number of inhabitants living in the EU-28 increased by 33.3 million persons. The level of EU-28 energy consumption in 2015 was 11.6 % lower than its previous peak of 1 840 Mtoe recorded in 2006, equivalent to an average reduction of 1.4 % per annum.

The gross inland consumption of each EU Member State depends, to a large degree, on the structure of its energy system, the availability of natural resources for primary energy production, and the structure and development of each economy (generally less energy is consumed when economies are experiencing a recession); this is true not only for conventional fuels and nuclear power, but also for renewable energy sources.

Germany had the highest level of gross inland consumption of energy in 2015, accounting for a 19.3 % share of the EU-28 total. France (15.5 %) and the United Kingdom (11.7 %) were the only other EU Member States to record double-digit shares, with Italy’s 9.6 % share just below this level. Together these four Member States accounted for 56.1 % of the EU-28’s gross inland consumption.

EU-28 final energy consumption (in other words, excluding energy used by power producers and energy transformation processes) was equivalent to two thirds (66.6 %) of gross inland consumption, at 1 084 Mtoe in 2015. The relative shares of the four largest EU Member States were similar to those recorded for gross inland consumption of energy; between them they accounted for 55.7 % of the EU-28’s final energy consumption, with the highest share registered in Germany (19.6 %) — see Table 2.

Energy intensity is a measure of an economy’s energy efficiency. The least energy-intensive economies in the EU in 2015 were Ireland, Denmark, Luxembourg, Malta and the United Kingdom; they used the lowest amount of energy relative to their overall economic size (based on gross domestic product (GDP)). The most energy-intensive EU Member States were Bulgaria and Estonia (see Figure 2). It should be noted that the economic structure of an economy plays an important role in determining energy intensity, as service-based economies will, a priori, display relatively low energy intensities, while economies with heavy industries (such as iron and steel production) may have a considerable proportion of their economic activity within industrial sectors, thus leading to higher energy intensity.

As shown in Figure 4, international aviation had the highest growth in EU-28 energy consumption among the principal modes of transport between 1990 and 2015 — rising 88.8 % overall. Road transport — by far the largest transport mode — and domestic aviation were the only other transport modes to report increases over this period, as their consumption rose by 23.3 % and 4.0 % respectively. By contrast, energy consumption in 2015 was 24.2 % lower than in 1990 for rail transport and 29.9 % lower for transport via inland waterways.

In absolute terms, the largest decreases in energy consumption among the different transport modes were recorded for transport via inland waterways and for rail transport, where EU-28 consumption was between 1.9 and 2.0 Mtoe lower in 2015 than in 1990 (for both these modes). There was almost no change in the energy consumed by domestic aviation, while the consumption of energy for international aviation rose by 21.5 Mtoe between 1990 and 2015; for comparison the 55.5 Mtoe increase recorded for road transport was more than 2.5 times as high. These changes in energy consumption reflect the use of each transport mode, but can also be influenced by technological changes, especially when they relate to fuel-efficiency gains or losses.

Gross inland energy consumption represents the quantity of energy necessary to satisfy inland consumption of the geographical entity under consideration. It is defined as primary production plus imports, recovered products and stock changes, less exports and fuel supply to maritime bunkers (for sea-going ships of all flags). It describes the total energy needs of a country (or entity), covering: consumption by the energy sector itself; distribution and transformation losses; final energy consumption by end-users; non-energy use of energy products and statistical differences.

Energy intensity is measured as the ratio between gross inland consumption of energy and GDP; this indicator is a key indicator for measuring progress under the Europe 2020 strategy for smart, sustainable and inclusive growth. The ratio is expressed in kilograms of oil equivalent (kgoe) per 1 000 euro, and to facilitate analysis over time the calculations are based on GDP at constant prices with reference year 2010. If an economy becomes more efficient in its use of energy and its GDP remains constant, then the ratio for this indicator should fall.

As well as supply-side policies to influence the production of energy, there is a growing trend for policy initiatives to focus on improving energy efficiency in an attempt to reduce energy demand and decouple it from economic growth. This process was given impetus by the integrated energy and climate change strategy that committed the EU to cut its energy consumption by 20 % by 2020 (in relation to projected levels) and, in so doing, simultaneously address the issues of import dependency, energy-related emissions and energy costs.

Energy efficiency also features in the two most recent strategic developments, the EU’s energy security strategy (COM(2014) 330 final) and a framework strategy for a resilient energy union with a forward-looking climate change policy, as detailed in a European Commission Communication (COM(2015) 80 final). The first lists increasing energy efficiency and reaching the proposed 2030 energy and climate goals as one of five areas for action, while the latter lists energy efficiency as having the potential to moderate energy demand as one of its five dimensions; for more information see the introductory article on energy statistics. The European Commission is optimistic that the 20 % primary energy consumption target will be reached if the EU Member States adhere to their commitments and continue to implement existing energy efficiency legislation and energy efficiency programmes. The Commission publishes an assessment of the progress being made in relation to national energy efficiency targets for 2020 and towards the implementation of the Energy Efficiency Directive; for more information, see the 2016 progress report (COM(2017) 56 final).

By using energy more efficiently, Europeans can lower their energy bills, reduce their reliance on external suppliers of oil and gas, and help protect the environment. The EU harmonises national measures relating to the publication of information on the consumption of energy by household appliances, thereby allowing consumers to choose appliances on the basis of their energy efficiency. A range of different products (for example, light bulbs, refrigerators, washing machines) carry the EU’s energy label (Directive 2010/30/EU) that details the energy efficiency of products, rating them according to a scale that ranges from A to G, with ‘A’ (or even A+, A++ or A+++ for some types of appliances) as the most energy efficient products and ‘G’ the least efficient; a maximum of seven colours are also used with dark green always representing the most efficient and red the least efficient.

There are many factors that impact on energy use for transport, for example, overall economic growth, the efficiency of individual transport modes, the take-up of alternative fuels, advances in transport technology and fuel, and lifestyle choices. The globalised nature of the EU economy has fuelled demand for international freight movements (principally by ship), while within the single market there has been a considerable expansion in the use of road freight transport. The growth of low-cost airlines, an increase in motorisation rates (the average number of motor vehicles per inhabitant), a trend for living in suburban areas, or the expansion of tourism (more frequent breaks, and more long-haul destinations) are among some of the factors that have contributed to the longer-term increase in demand for energy as a result of personal travel (especially for road transport and international aviation).