Close to half of the net electricity generated in the EU in 2018 came from combustible fuels.

This article describes the electricity market in the European Union (EU) with an analysis of electricity production/generation (the two terms are used synonymously) according to a range of different energy sources. It also provides information concerning electricity consumption by households and concludes with statistics on the level of market liberalisation (as measured by the share of the largest generator) within electricity markets. 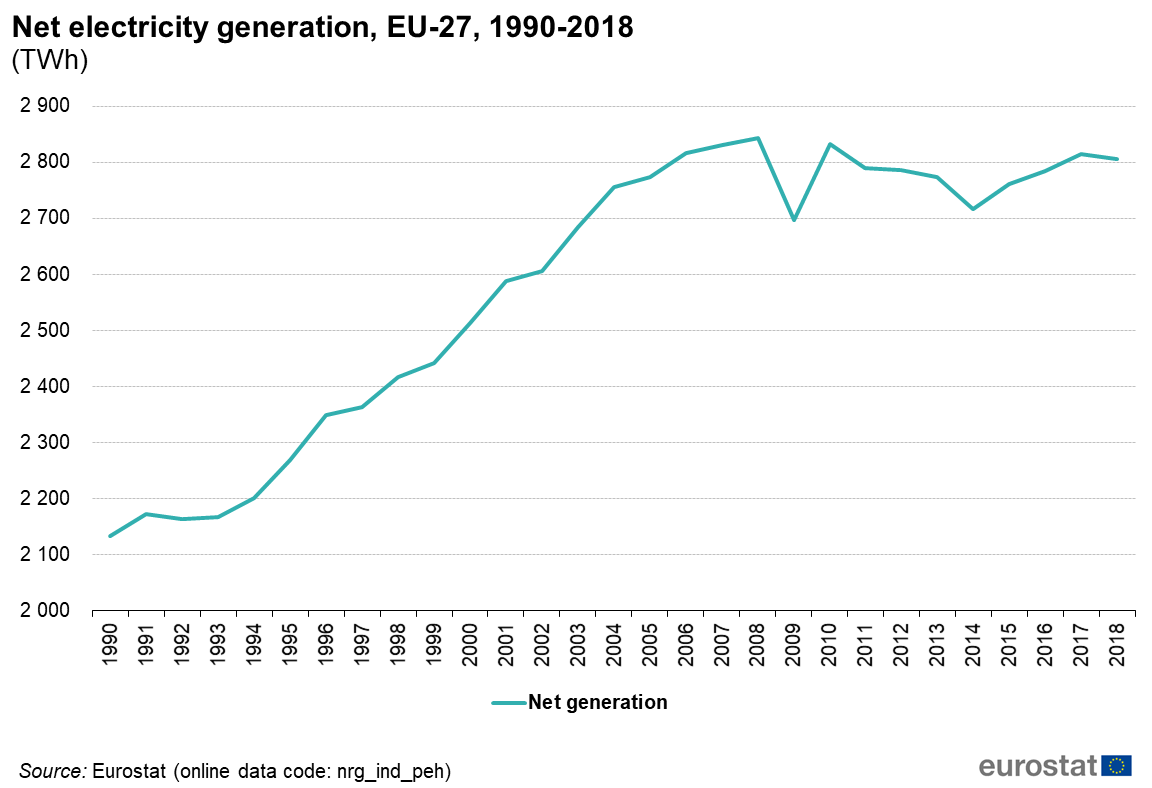 Germany had the highest level of net electricity generation in 2018 among the EU Member States, accounting for 21.7 % of the EU total, just ahead of France (19.9 %); Italy (10.0 %) was the only other Member State with a double-digit share.

During the period covering 2008 to 2018, there was an overall reduction of 1.3 % in the level of EU net electricity generation (see Figure 2). This pattern was repeated in 11 of the 27 EU Member States. The largest overall contractions were registered in Lithuania (-74.1 %), Luxembourg (-38.3 %) and Hungary (-20.2 %), while there were also double-digit reductions in Denmark, Greece, Spain, Malta and Belgium. By contrast, among the 16 EU Member States where there was a higher level of electricity generation in 2018 (compared with 2008), double-digit increases were recorded in Portugal, Latvia and Estonia. 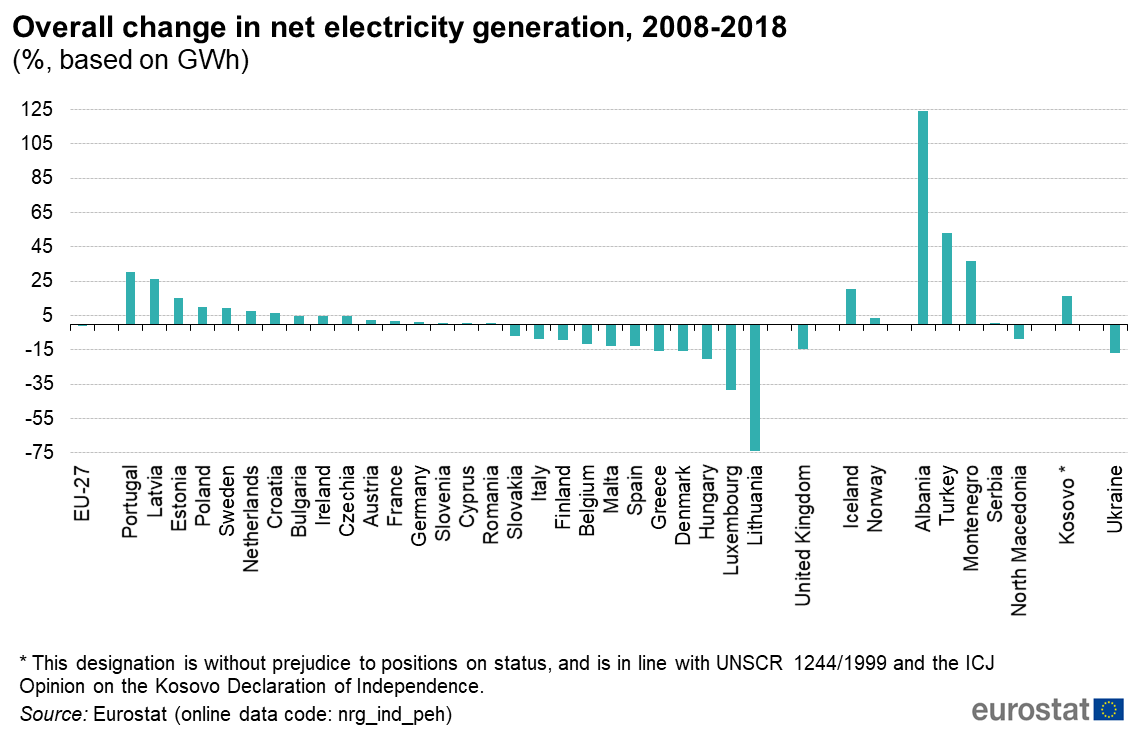 Close to half (45.5 %) of the net electricity generated in the EU in 2018 came from combustible fuels (such as natural gas, coal and oil), while a quarter (25.8 %) came from nuclear power stations. Among the renewable energy sources shown in Figure 3, the highest share of net electricity generation in 2018 was from hydropower plants (13.0 %), followed by wind turbines (11.3 %) and solar power (4.1 %). 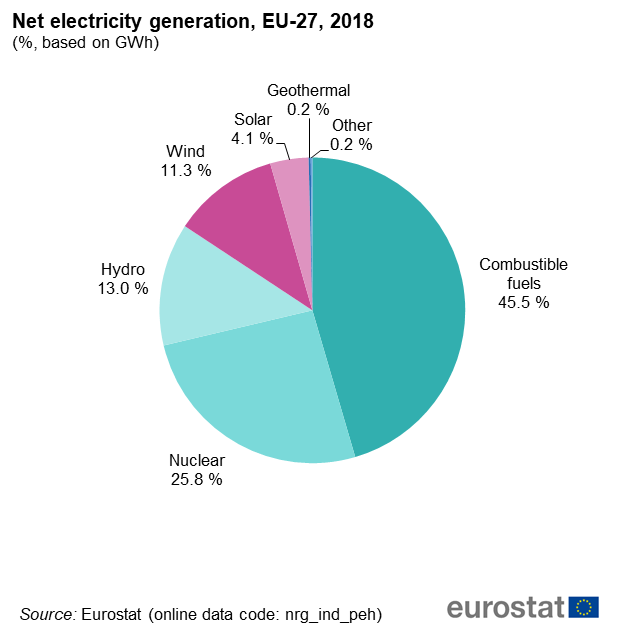 During the 10-year period from 2008 to 2018, the consumption of electricity by households rose in the EU by 1.3 % (see Figure 4). These figures on overall household electricity consumption are likely to be influenced, in part, by the average number of persons living in each household and by the total number of households, both of which are linked to demographic events. Other influences include the extent of ownership and use of electrical household appliances and consumer goods as well as the use of energy saving devices. 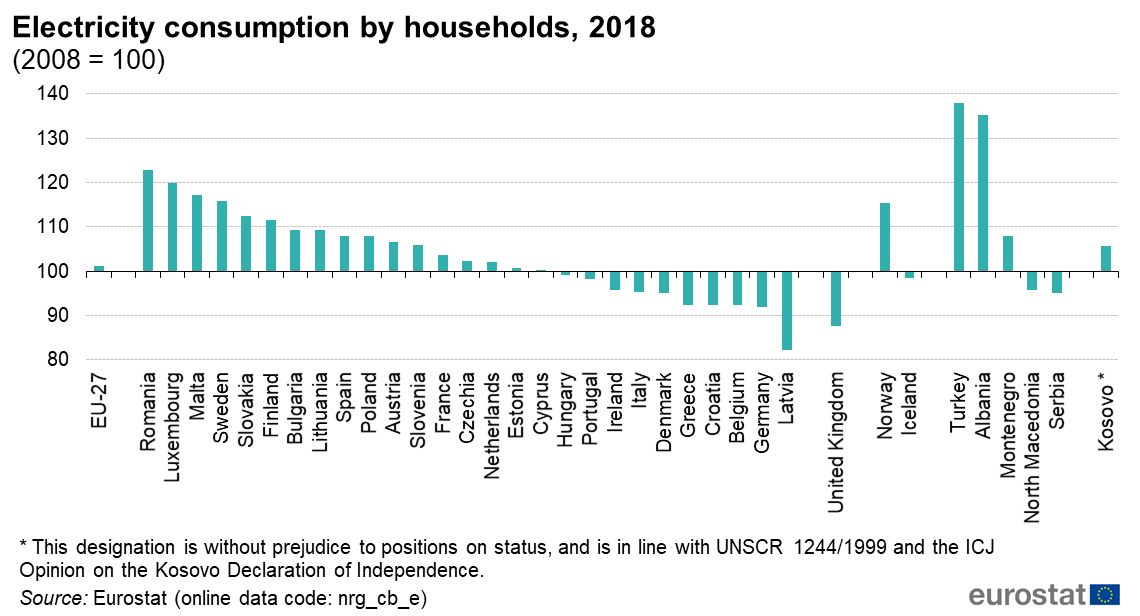 One measure that is used to monitor the extent of electricity market liberalisation is the market share of the largest generator in each country (see Figure 5). The small island nation of Cyprus was characterised by a complete monopoly in both 2008 and 2018, with 100 % of their electricity being generated by the largest (sole) generator. Five other EU Member States — Croatia, France, Estonia, Malta and Slovakia — reported shares of at least 70 %. In almost half of the 25 Member States for which data are available (no data for Bulgaria and the Netherlands), the largest electricity generator provided less than 50 % of the market, with the lowest share (14.4 %) being recorded in Luxembourg. 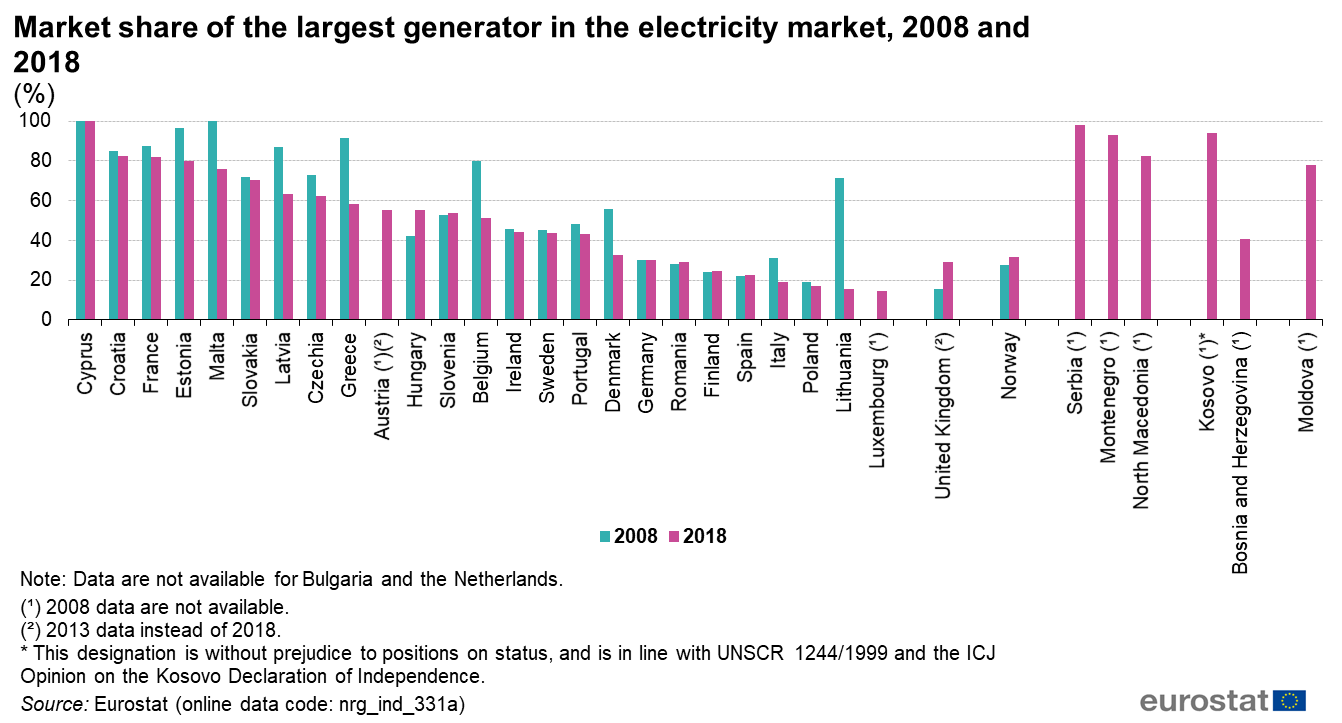 Final consumption of electricity covers the electricity delivered to the consumer’s door (industry, transport, households and other sectors); it excludes deliveries for transformation and/or own use of energy producing activities, as well as network losses.

Since July 2004, small business consumers in the EU have been free to switch their gas or electricity supplier, and in July 2007 this right was extended to all consumers. Independent national regulatory authorities have been established across the EU Member States to ensure that suppliers and network companies operate correctly. However, a number of shortcomings were identified in the opening-up of markets, and it was therefore decided to embark upon a third legislative package of measures with the aim of ensuring that all users could take advantage of the benefits provided by a truly competitive energy market.

The European Commission launched its third legislative package to liberalise energy markets in September 2007. During 2009, a number of these proposals were adopted by the European Parliament and the Council:

On 17 November 2010, the European Commission presented its Energy infrastructure priorities for 2020 and beyond — a blueprint for an integrated European energy network (COM(2010) 677 final), detailing priority corridors for the transport of electricity, gas and oil. This was given a legal basis in April 2013 through the European Parliament and Council’s Regulation (EU) No 347/2013 on guidelines for trans-European energy infrastructure. Based on this, in October 2013, the European Commission adopted a list of 248 key energy infrastructure projects referred to as projects of common interest (PCI). It is intended that these will benefit from faster and more efficient planning procedures and improved regulatory treatment, as well as possibly accessing financial support from the Connecting Europe Facility (CEF). The list is composed of projects that are deemed to have significant benefits for at least two EU Member States, contribute to market integration and further competition, enhance the security of supply, and reduce carbon dioxide emissions.

The use of nuclear power for electricity generation received renewed attention amid concerns about an increasing dependency on imported primary energy, rising oil and gas prices, and commitments to reduce greenhouse gas emissions. These issues may be balanced against concerns over safety and waste from nuclear power plants, the safety issues being highlighted following the Fukushima Daiichi nuclear disaster that resulted from the Great East Japan (or Tōhoku) earthquake and subsequent tsunami in March 2011. While some EU Member States have continued with existing reactors or plans to construct new nuclear reactors others decided to review, and in some cases, changed policies for existing plants, as well as cancelling planned nuclear constructions. Following the accident in Fukushima, the legal and regulatory framework for the safety of nuclear installations established by Council Directive 2009/71 was reviewed. In July 2014, an amendment (Council Directive 2014/87) was adopted. Among its many objectives the amendment: strengthens the role and independence of national regulatory authorities; sets up an EU system of peer reviews for nuclear installations; aims to increase transparency on nuclear safety matters; lays down regular safety assessments of installations; and establishes new provisions for on-site emergency preparedness and response.