In 2018, road transport accounted for 75.3% of the total inland freight transport, followed by rail and inland waterways transport (18.7% and 6.0% respectively).

Modal split in the EU

Modal split of inland freight transport in 2013-2018: road transport continues to carry three quarters of freight in the EU 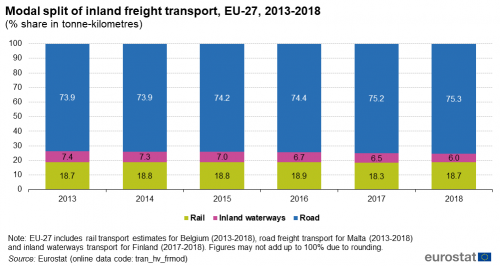 Noticeable changes in the modal split of Estonia, Slovakia, Latvia and Hungary from 2013 to 2018

Even though the modal split between the different modes of transport does not tend to change radically from year to year at EU level, changes are sometimes more noticeable at country level. As can be seen in Figure 2, the modal split at country level varies considerably. In particular, the modal split obviously depends on the availability of a given mode. Only 17 of the Member States report freight data on inland waterways. In particular, Cyprus and Malta do not have either railways or navigable inland waterways; thus, for these two Member States the share of road freight transport is 100 % by default. 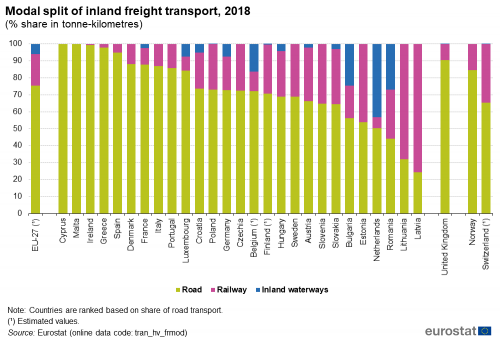 The importance of rail transport in the Baltic States is evident. This is essentially linked to the transport of Russian energy products to the Baltic Ports. For several years, the share of rail in the total transport performance was in the range 70 % - 85 % in the three Baltic countries. The share of rail in Estonia has constantly fallen between 2013 and 2016, when it dropped below 50 %. In 2017 and 2018, a small rebound was observed with a 1.5 pp increase in 2017 compared with previous year and 1.8 pp increase in 2018. Compared with 2013, it was a 17.5 pp decrease in 2018 (see Table 1). This was mainly caused by a significant fall in transport of petroleum products. As Estonia has no inland waterways transport, the fall in the share of rail was directly reflected in a corresponding rise in the share of road (+17.5 pp). From 2013 to 2018, the decreases in the share of rail were noticeable also in Slovakia (-6.4 pp) and Latvia (-5.4 pp). When looking at the share of road, besides the countries aforementioned, an increase between 2013 and 2018 was also observed in Hungary (+5.6 pp). 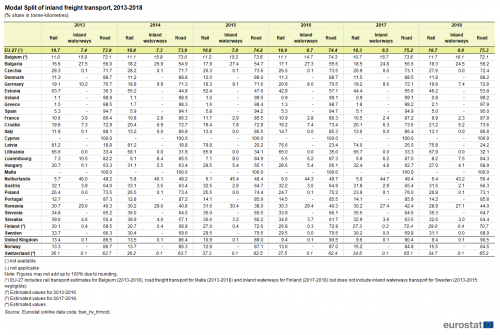 Inland waterways freight transport has a very important role in the Netherlands (43.2 % in 2018), but still below the share of road (50.4 % in 2018). The comparatively high shares of inland waterways freight transport in Romania (27.1 % in 2018) and Bulgaria (24.5 % in 2018) are in part explained by the extensive traffic on the Danube and in part by the ‘territorialisation’ of the road data. (An explanation of this adjustment is given in the Data sources section below.)

It should be kept in mind that the modal split and the associated shares of each transport mode are calculated with the total transport performance by the inland modes as denominator. This means that an increasing share of one mode does not necessarily express a higher transport performance for that mode. Instead, this may be a result of noticeable drops in other modes. The development in Estonia, for example, where a sharp drop in 2017 in rail transport performance is reflected directly in a steep increase in the share of road transport, is a case in point. This is the reason why the tonne-kilometres data used for calculating the modal split are also presented in this article (Table 2). 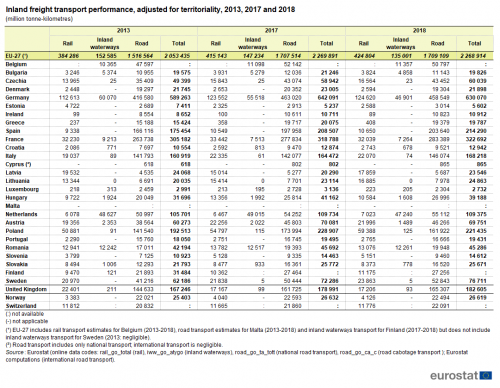 Table 2 shows the transport performance data used for the calculation of the modal split (modal shares are shown in Table 1). As mentioned above, the data referring to road transport have been adjusted to reflect on which country’s territory the transport took place, regardless of who performed this transport. The tonne-kilometres series used for calculation of the modal split showed an increase (+10.5 %) in the total inland freight transport performance in the EU between 2013 and 2018.

Looking only at the two most recent reference years at EU level, the total freight transport performance remained stable between 2017 and 2018 (-0.04 %), with road stagnating (+0.1 %), rail increasing by 2.3 % and inland waterways substantially decreasing by 8.3 %.

Who drives where in international road freight transport? 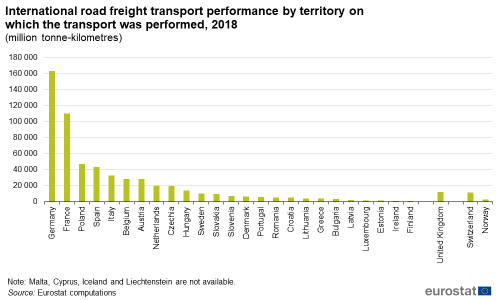 Figures 3 and 4 shows the ranking of the countries according to the territories where international transport performance took place, i.e. where hauliers drove most (regardless of who was performing the transport) in 2018. Due to the size of the country and its location in the middle of Europe, but also due to its importance as a country with large manufacturing industries, German roads continue to top the list for European-wide international road freight transport: 27.0 % of all tonne-kilometres performed in international road freight transport (corresponding to around 163 billion tonne-kilometres) took place in Germany, with a decrease of 4.5 % compared with the year before. France followed next, although far behind, with a share of 18.3 %. With 7.8 % of international road transport performance in the EU, Poland comes third, followed by Spain (7.2 %) and Italy (5.4 %). 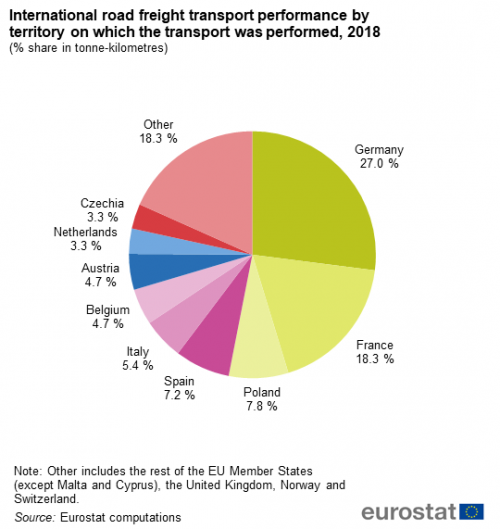 Figure 4: International road freight transport performance by territory on which the transport was performed, 2018
(% share in tonne-kilometres)
Source: Eurostat computations 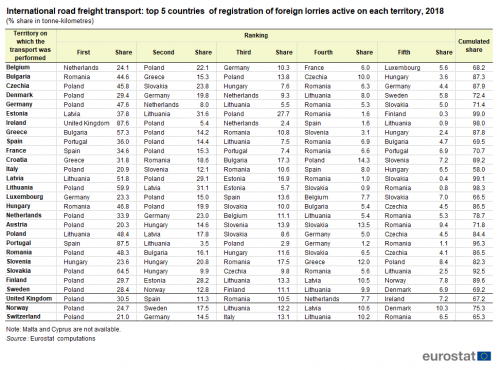 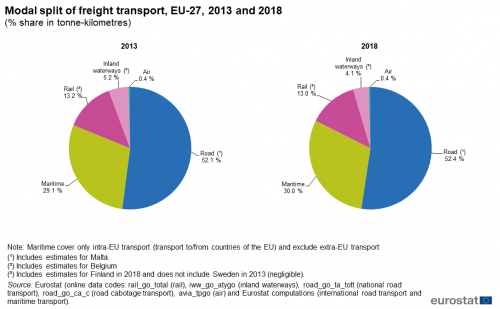 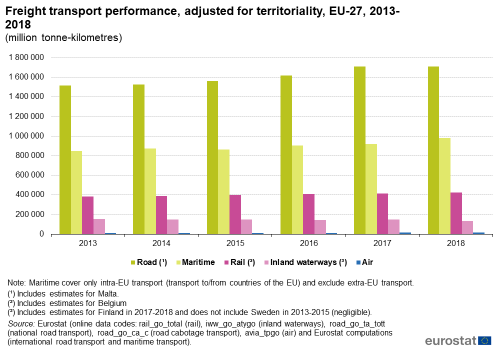 The sources for the statistics in this article are from Eurostat. Statistical data have been reported to Eurostat by EU Member States in the framework of various EU legal acts. The essential legal acts are the following:

This article also includes data for inland transport modes from the United Kingdom, two EFTA countries, which participate in EU data collections: Norway (NO) and Switzerland (CH). Iceland (IS) and Liechtenstein (LI) (for LI since 2013) both are granted derogations for road freight transport.

According to Regulation (EU) No 70/2012 on statistical returns in respect of the carriage of goods by road, Malta is granted derogation from reporting road freight data to Eurostat. However, since Malta does not have any railway or inland waterways, the share of road in inland freight transport is 100%.

Adjustment of road freight data according to the ‘territoriality principle’

In order to calculate modal split shares on the basis of coherent data sets, as rail and inland waterways follow the ‘territoriality principle’, the international road freight transport data have been redistributed according to the national territories where the transport actually took place. This redistribution involved modelling the likely journey itinerary and projecting it on the European road network. The international road freight journeys’ tonne-kilometres have been taken from the ‘Tables on transport operations at regional level', computed by Eurostat on the basis of the detailed national survey data. There is a time lag before these tables become available and the territorialisation of international road freight data makes sense only when the datasets of all reporting countries have been received.

It order to redistribute the tonne-kilometre data proportionally to the countries concerned by the journey, the TERCET tool (territorial typologies) has been used. This tool allows the calculation of the total distance between the NUTS level 3 region of origin and the NUTS level 3 region of destination and breaks down the total distance into sections according to the countries in which this transport took place. With the help of this tool, the distances driven on the territories of the individual countries were calculated and the declared tonne-kilometres were proportionally attributed to the countries concerned.

Furthermore, transport performance of road freight journeys to non-EU countries (apart from the United Kingdom, the EFTA countries, Turkey, Montenegro and North Macedonia) has not been taken into account. Therefore the cumulated values of the territorialised transport performance will always be lower than those declared in compliance with relevant EU legal acts. Some journeys have their origin or destination in regions that are not covered by the TERCET tool (which is notably the case for islands such as the Canary Islands, Madeira, Greek Islands, etc.). In such cases, the region of origin/destination have been given the NUTS 3 region code where the main freight ferry terminals are located in order to avoid further underestimation of the data.

Data on total road freight transport for the reference period from 2005 onwards, calculated on the basis of the territorialised international transport, are included as an annex in the Excel file downloadable under 'Source data for tables and graphs' below.

Calculation of tonne-kilometres for air and maritime freight transport

Within the framework of the relevant legal act, Eurostat collects maritime data of goods transported in tonnes between port pairs (port of loading and port of unloading). Nevertheless, these data cover only defined ‘main ports’, i.e. ports handling more than 1 million tonnes of goods annually. In order to calculate transport performance in tonne-kilometres for maritime transport, Eurostat has developed a distance matrix on the basis of the most likely sea routes taken by vessels. Multiplying tonnes transported between a pair of ports by the relevant distance has allowed the calculation of the maritime transport tonne-kilometres at EU level.

In order to exclude double counting of the same goods being reported as inwards transport by one port and as outwards transport by another port within the EU, all such records identified in the data have been excluded. However some uncertainty in the recording of the partner ports of loading or unloading may influence the results. Due to some degree of uncertainty in the outwards data, all outgoing goods with an ‘unknown’ partner port have been excluded from the tonne-kilometres calculations on the assumption that this transport has been correctly reported as incoming goods by the partner country. Since inland freight transport (road, rail and inland waterways) is essentially performed on the territory of the European continent, it has been considered appropriate to limit maritime freight transport to national and international intra-EU transport. Thus, distortions in the overall picture of the European transport market, which would appear by including deep sea shipping, are avoided.

Similarly to maritime transport, Eurostat collects air transport data of cargo (expressed in tonnes) forwarded between airport pairs according to the relevant legal act. The legal act defines categories of airports according to the passenger units handled per year. Passenger unit is equivalent to either one passenger or 100 kilograms of freight and mail. Three datasets are defined according to different concepts: ‘Flight Stage’; ‘On Flight Origin Destination’; ‘Airport’). Air transport data used for the calculation of tonne-kilometres are based on the ‘Flight Stage’ concept. Air transport, as analysed in this article, covers transport to and from any airports in the reporting countries with more than 150 000 passenger units annually. In order to calculate transport performance in tonne-kilometres for air transport, Eurostat is using a distance matrix that contains great circle distances (minimum distance on a spherical line) between airport pairs. The distance matrix contains as well a so-called 'territorialisation tool' that allows attributing the calculated tonne-kilometres to the countries overflown on the route. The distance for each country is based on its national airspace, which includes territorial waters of 12 nautical miles off its coast. The calculated ‘territorialised’ air transport performance is a concept intended to be used only for comparing the transport modes' activity at the EU or at a country level for the purpose of modal split. More information can be found in the relevant metadata on Eurostat website, here.

The European Commission’s White Paper “Roadmap to a Single European Transport Area — Towards a competitive and resource efficient transport system”, adopted in March 2011, states that the transport sector in the EU should use less and cleaner energy, and that there should be efficient networks. The White Paper adds that shifting transport to more environmentally sustainable transport modes should be encouraged.

There is a need for EU-wide data to monitor progress towards this goal. Recording modal shifts over time is therefore very important, and enables policy guidelines to be tailored more accurately.