Total road freight transport in the EU registered an average annual growth rate of 2.1 % over the period 2017-2021.

Poland remained the top country for performing international transport in 2021. 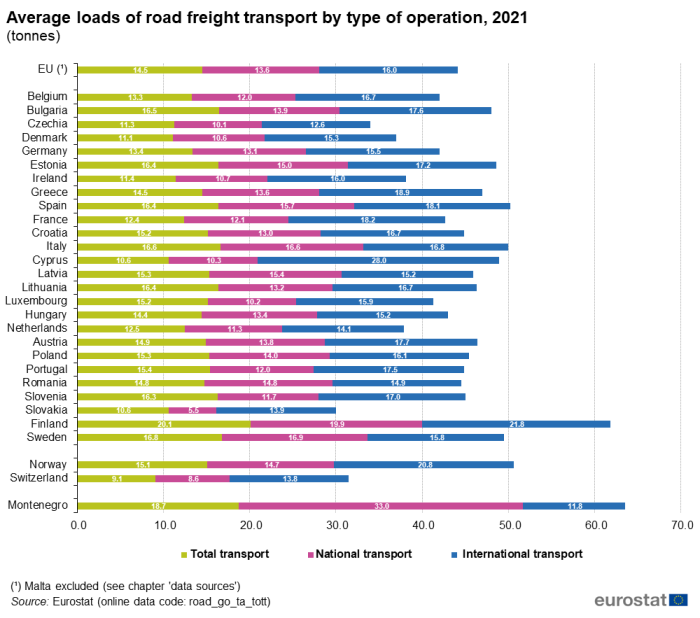 Road freight transport performance by type of operation (in tonne-kilometres) 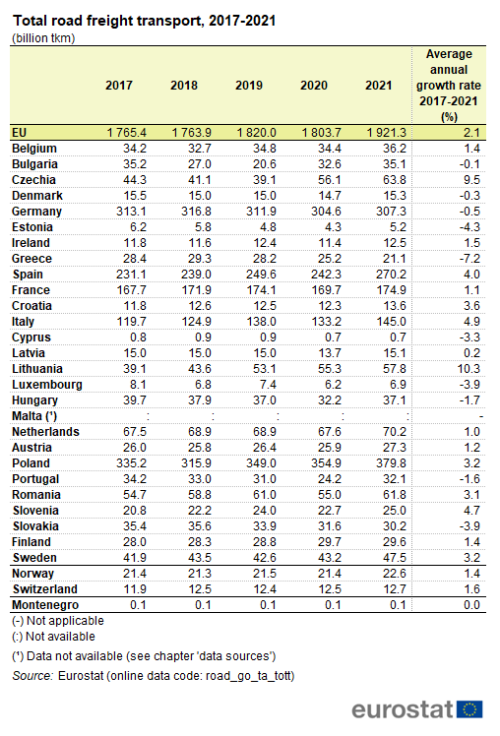 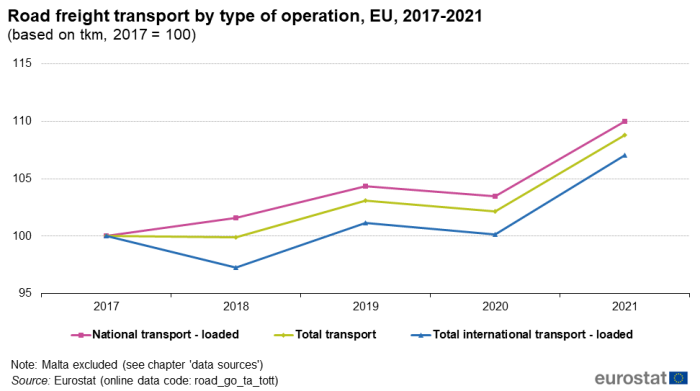 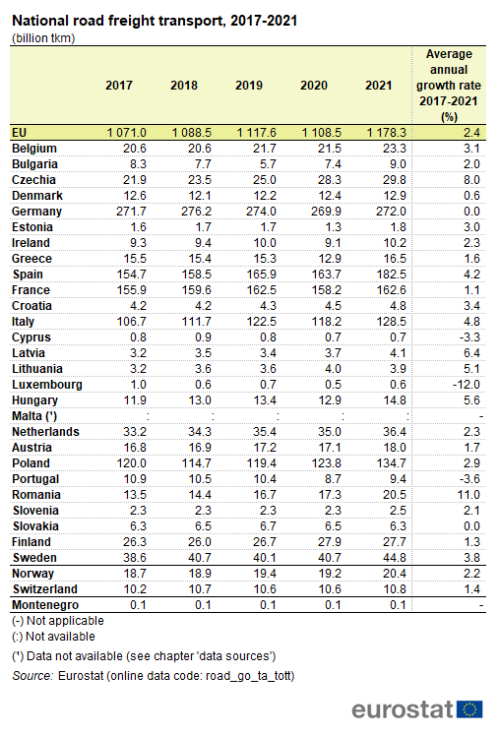 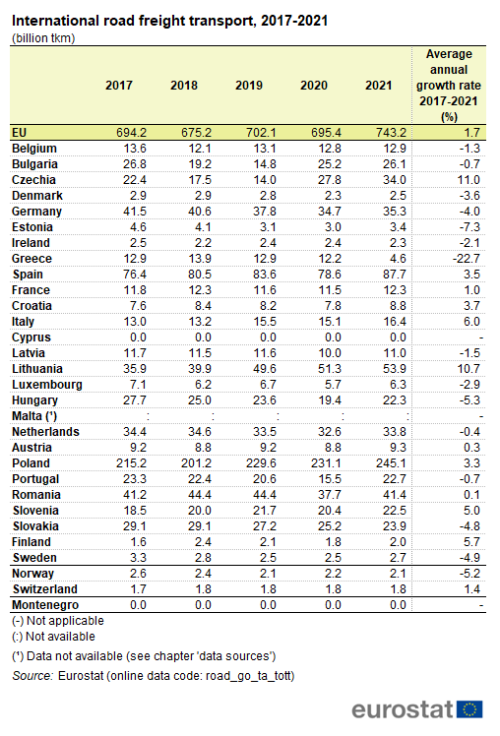 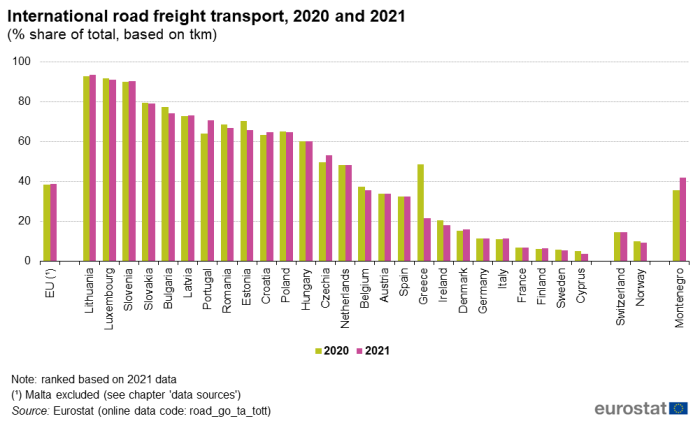 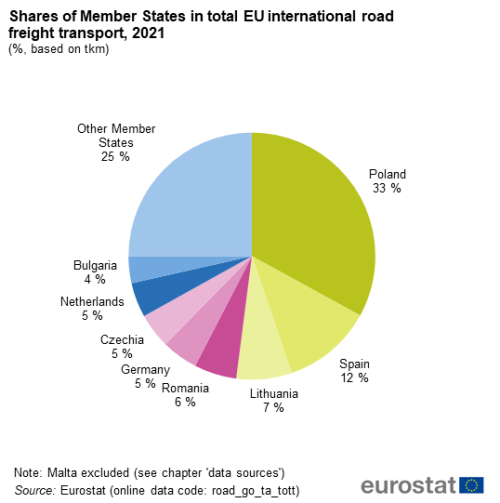 In five EU Member States (Bulgaria, Lithuania, Luxembourg, Romania and Slovenia), cross-trade transport represented more than 40 % of international transport in tonne-kilometres. For cabotage, Luxembourg stood out with a share in international transport of 22.1 %, which may be explained by the small size and the central geographical location of the country. The next highest shares of cabotage were recorded by Ireland (15.3 %) and Finland (13.2 %). 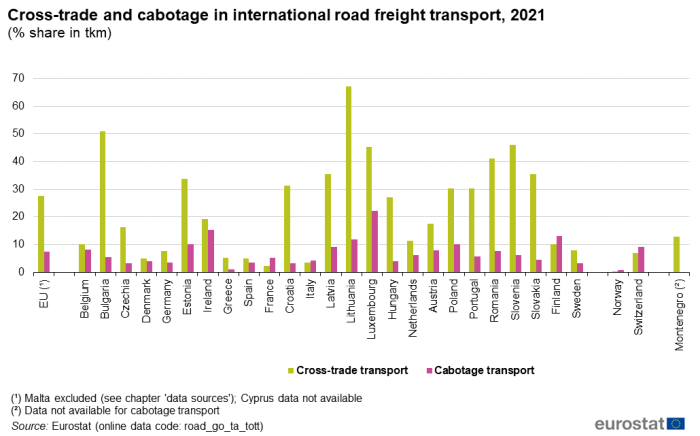 When looking at the distribution of total EU cross-trade in tonne-kilometres between the different EU Member States, the five countries with the highest shares in 2021 were Poland, Lithuania, Romania, Bulgaria and Slovenia (see Table 4). Poland continued to be the main cross-trade transporter by far, alone accounting for 36.3 % of total EU cross-trade transport. It was followed by Lithuania (17.7 %), Romania (8.3 %), Bulgaria (6.5 %) and Slovenia (5.1 %). All the other EU Member States registered shares below 5 %. 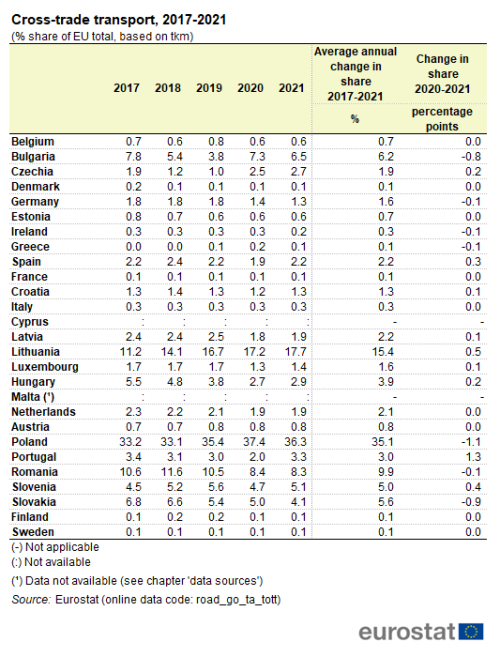 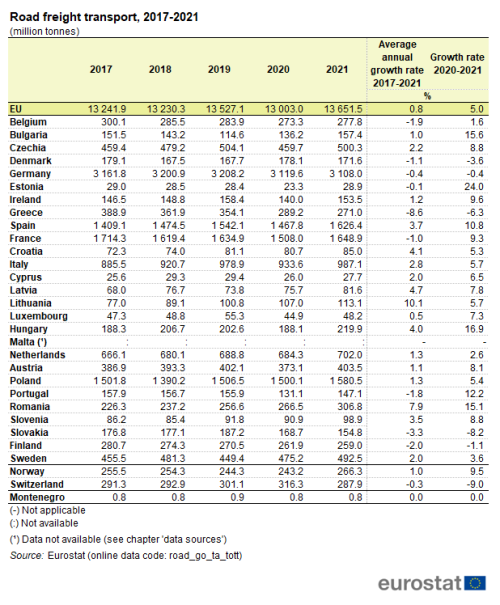 The average distance over which goods are carried has been calculated by dividing tonne-kilometres by tonnes for laden journeys only. This indicator provides information on the average distance travelled per tonne in each Member State and at EU level. The indicator is calculated separately for national, international and total transport. For total transport, national and international tonne-kilometres for laden journeys are added and then divided by the total tonnes transported. 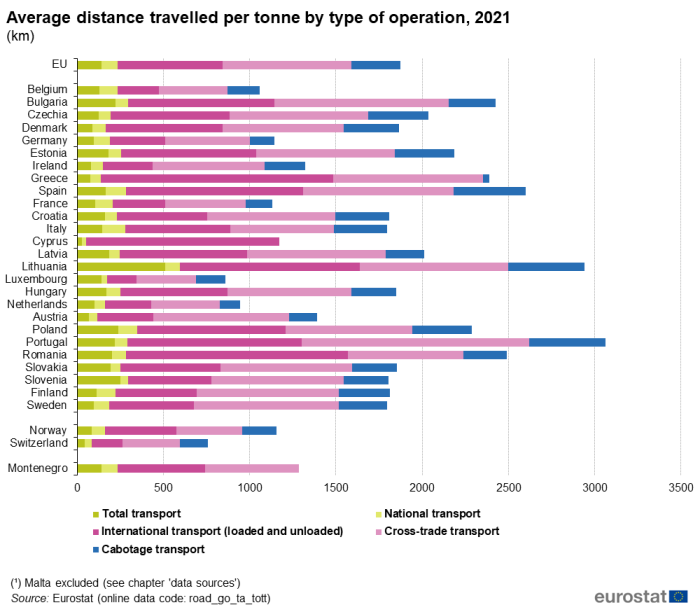 At EU level, in 2021, most of the goods were carried over distances between 300 and 999 km (40.8 %). This was also the case for most of the countries (see Table 6). However, a few countries showed a different pattern in their transport performance by distance class. For some islands and countries with an important domestic market, the share of road freight transport over short distances (less than 150 km) was higher: Ireland, Cyprus, the Netherlands and Austria. For Cyprus, more than 90 % of transport is carried over distances of less than 150 kilometres. On the other hand, countries where international road transport plays a key role had a higher share of transport over long distances (over 1 000 km); transport over 1 000 kilometres accounts for 40 % or more of total tonne-kilometres in Lithuania, Portugal, Bulgaria and Latvia (50.8 %, 48.8 %, 46.2 % and 40.0 %, respectively). 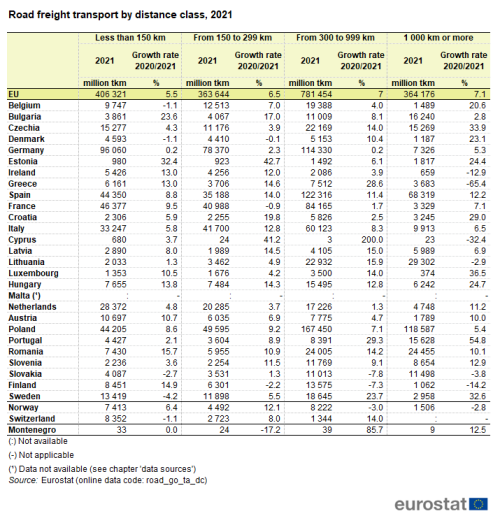 For total road freight transport, in 2021 a total of 17 EU Member States recorded a share of vehicle-kilometres by empty vehicles between 15 % and 30 %. The share for Cyprus stood much higher, at 39.5 %, which likely indicates that a big share of the road freight performance is linked either to goods imported through ports or construction traffic, both of which are linked to empty journeys in one of the two directions. Road freight performance by empty vehicles for Greece (35.0 %), Ireland (34.7 %) and Austria (34.3 %) was also well above the EU average. At the other extreme were Belgium, with only 6.7 % vehicle-kilometres by empty vehicles, and Denmark with 8.1 %. 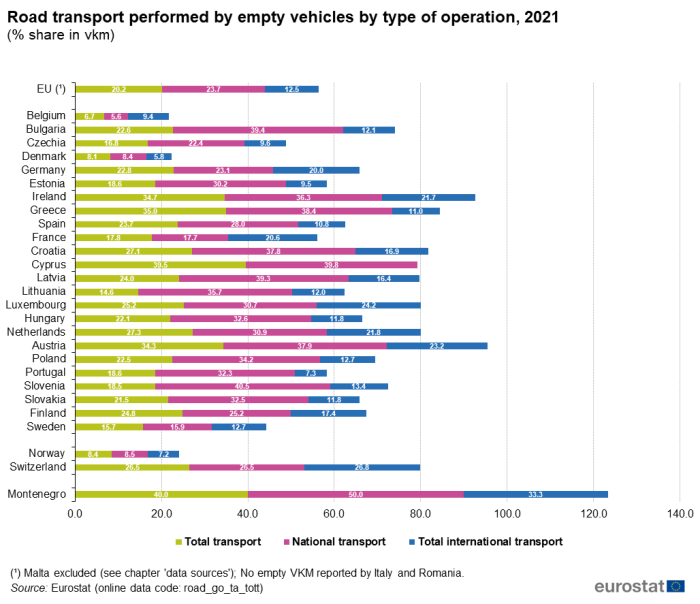 Data presented in this publication were collected in the framework of Regulation (EU) No 70/2012 on statistical returns in respect of the carriage of goods by road (recast). These data are based on sample surveys carried out in the reporting countries, i.e., the EU Member States, Norway, Switzerland and Montenegro, and record the road goods transport undertaken by vehicles registered in these countries.

Reporting countries use their own national surveys for the collection of data based on returns from road hauliers. The results are microdata referring to vehicles and their linked journeys providing detailed information on goods transported. At European level, common aggregation procedures have been used that might diverge from national practices. Therefore, differences might occur between the figures in this publication and national values.

Croatia: While Croatia had no obligation prior to accession in 2013, it started reporting data from reference year 2008.

Finland: National and international surveys have been harmonised and follow a common methodology from Q1 2011 onwards, leading to a break in series in 2011.

Sweden: A break in series occurred in 2014 following a change in methodology. On the basis of a specific survey, Sweden corrected the European road freight survey results for trucks participating in the sample which were not in use over the surveyed period.

Road freight transport performance in tonne-kilometres derives only from loaded journeys. Distances travelled by empty vehicles are not considered.

Data availability: The figures presented in this publication have been extracted from Eurostat’s free dissemination database and reflect the state of data availability in October 2022.