Metal ores and other mining and quarrying products was the group of goods which was mostly transported by road in the EU in 2018 in tonnes. 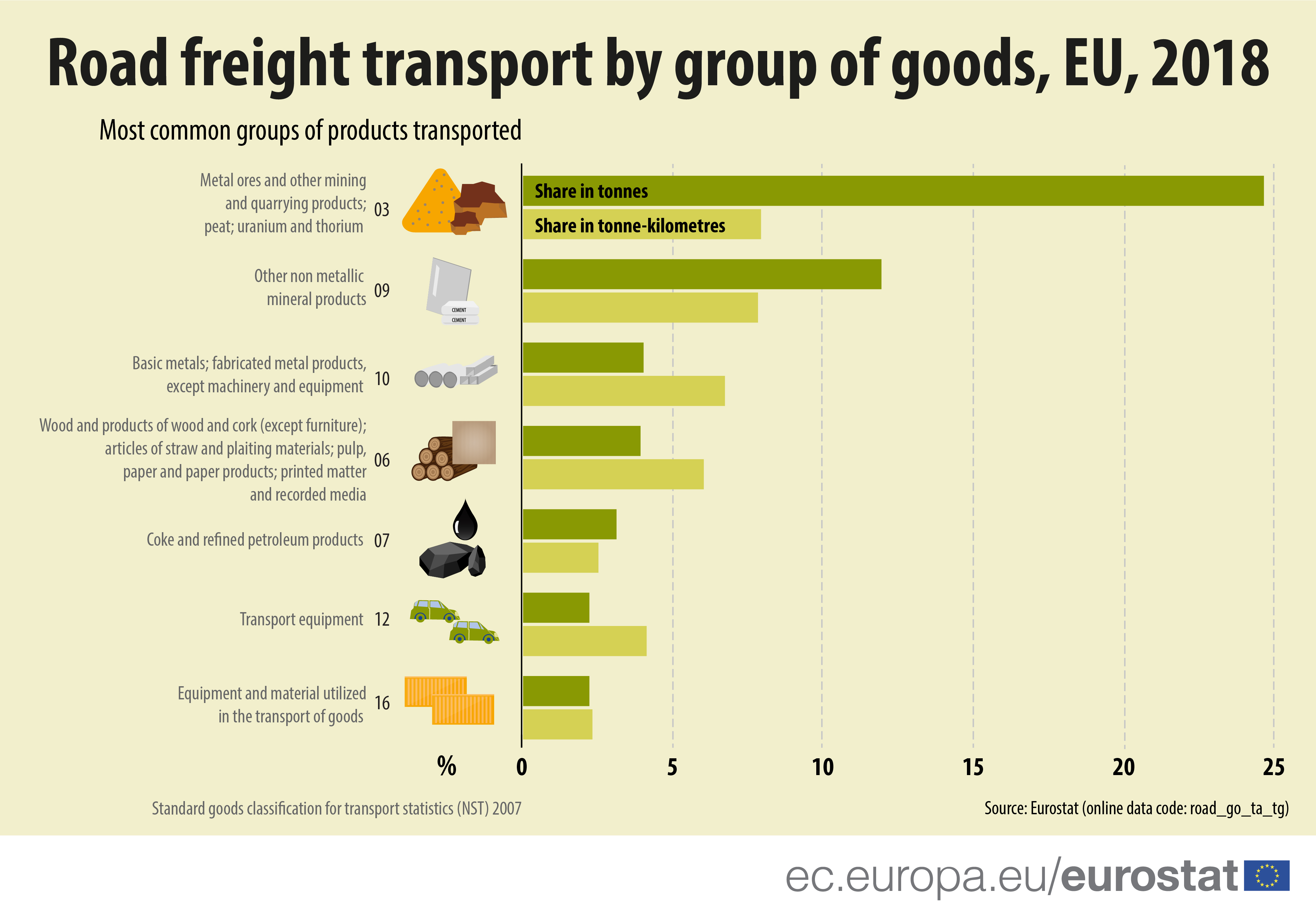 In terms of tonnes transported in 2018, the group of ‘metal ores and other mining and quarrying products’, the main volume of which is building materials, had the highest share of 24.6 %, followed by ‘other non-metallic mineral products’ (11.9 %), also goods used in construction, and ‘basic metals, fabricated metals products (4.0 %) as well as ‘wood and product of wood and cork’ (3.9 %) (see Figure 1 and Table 1). 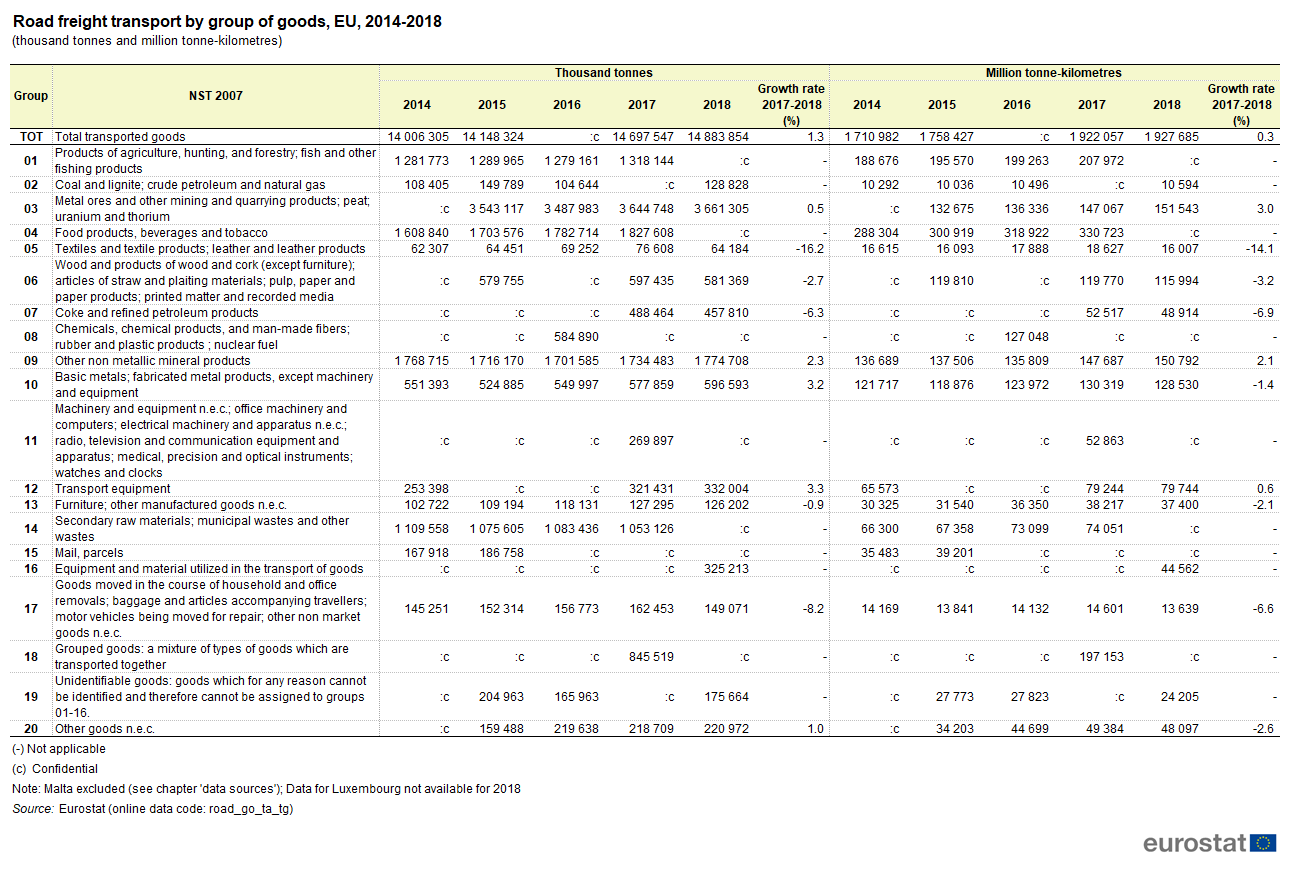 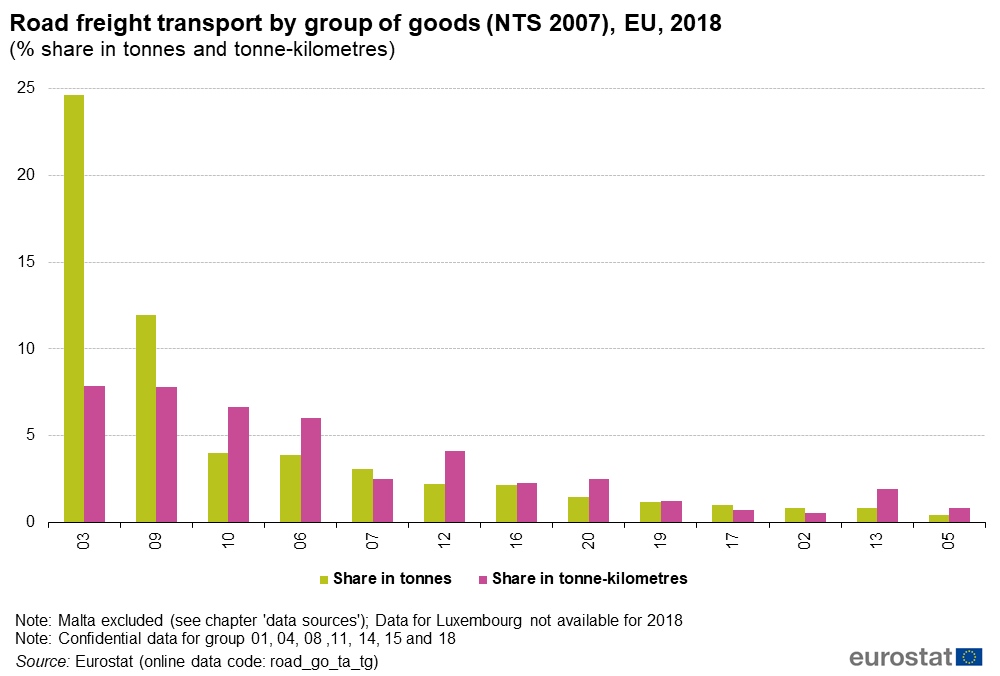 If distances over which the transport of goods takes place are calculated, the group 03 ‘metal ores and other mining and quarrying products’ recorded the largest share (7.9 % of tonne-kilometres), followed by ‘other non-metallic mineral products’ (7.8 % of tonne-kilometres) and ‘basic metals, fabricated metal products’ (6.7 % of tonne-kilometres). Figure 2 shows the share of each NST 2007 group in EU total, national and international road freight transport. It shows that group 2 'coal and lignite', group 3 ‘metal ores and other mining and quarrying products’, group 7 ‘coke and refined petroleum products’, group 9 ‘other non-metallic mineral products’ and group 17 'goods moved in the course of household and office removals' had higher shares in national than in international transport. The groups with more international than national transport were group 5 'textiles and textile products', group 6 'wood and products of wood and cork', group 10 ‘basic metals, fabricated metal products, except machinery and equipment’, group 12 'transport equipment', group 13 'furniture, other manufactured goods n.e.c.', group 16 ‘equipment and material utilized in the transport of goods’, group 19 'unidentifiable goods' and group 20 ‘other goods’. 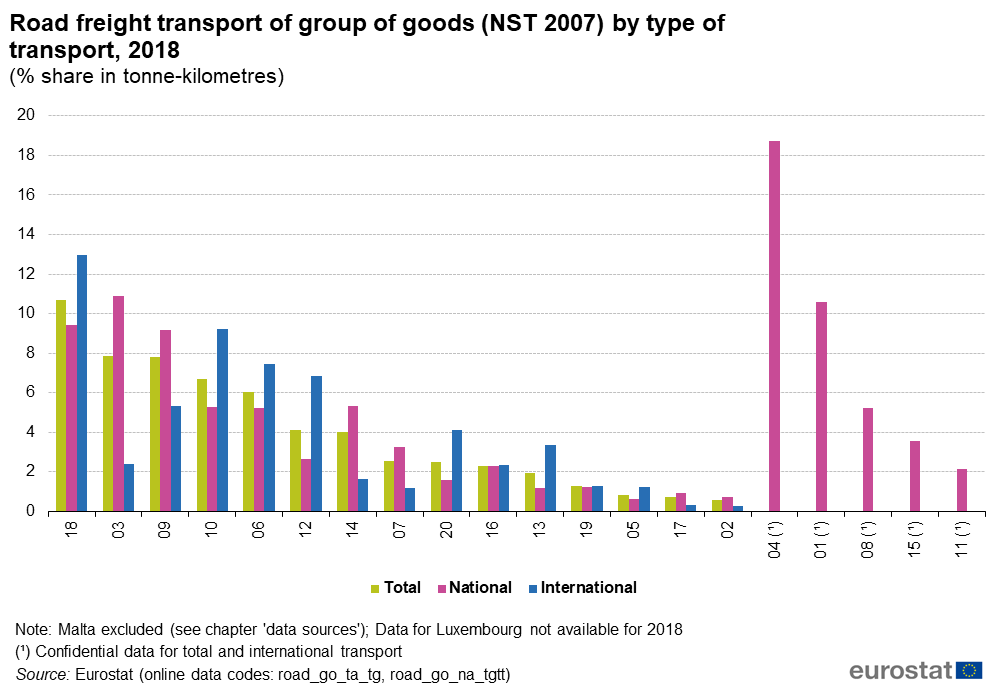 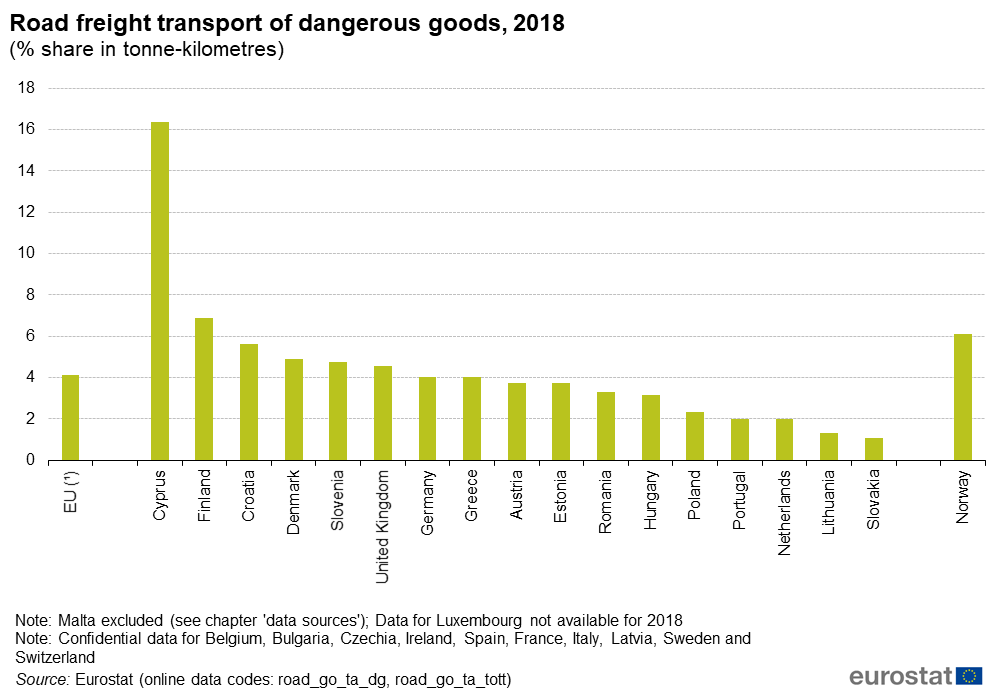 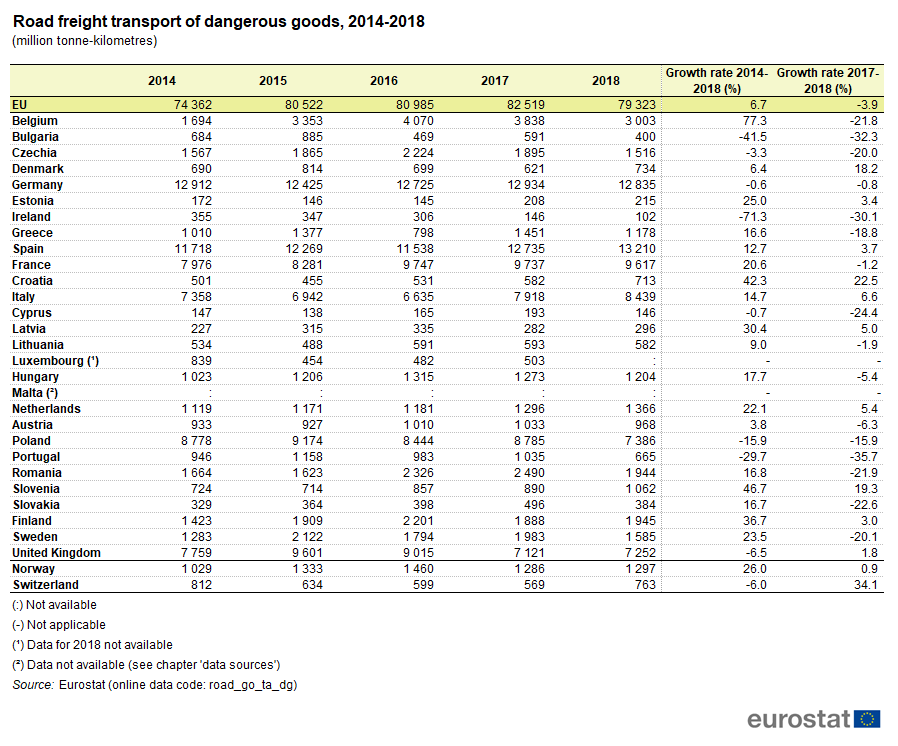 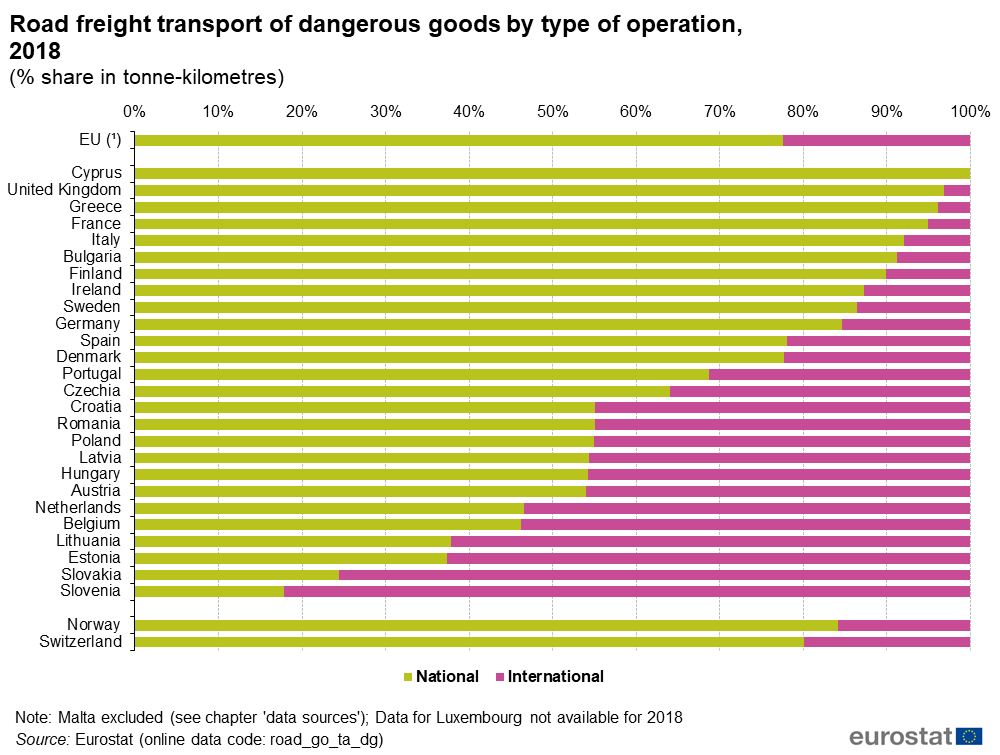 Figure 5 shows the types of dangerous goods in EU road freight transport in 2018. The largest specific product group was ‘flammable liquids’, taking over more than half of the total (52.9 %). Two other groups, ‘gases (compressed, liquefied or dissolved under pressure)’ and ‘corrosives’, accounted for 14.1 % and 12.1 % respectively. There were very small changes compared to previous years, the distribution between product groups remained quite similar over time. 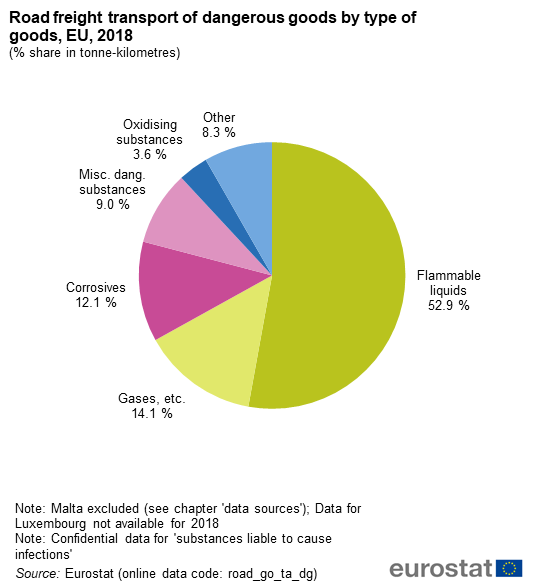 As dangerous goods represent a small share of all the goods transported by road, there are considerable uncertainties in the surveys’ results on this type of goods. 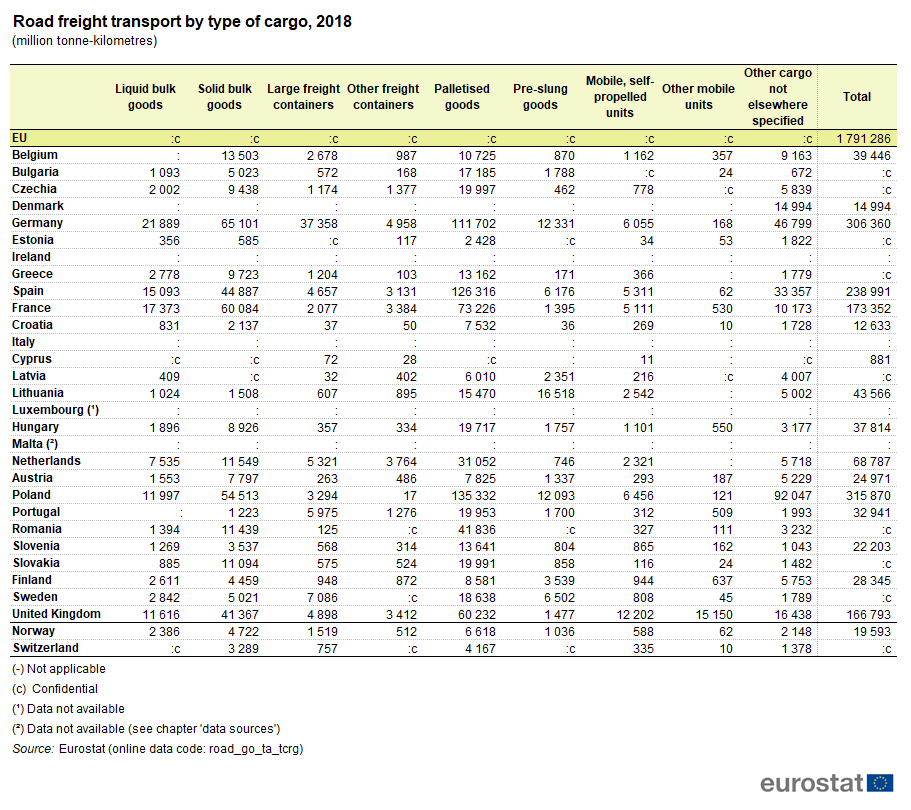 Croatia: While Croatia had no obligation prior to accession in 2013, it started to report data for the reference year 2008.

Starting with the reference year 2008, Regulation (EC) No 1304/2007 amends Council Regulation (EC) No 1172/98 and establishes NST 2007 as the sole classification for goods carried in road freight transport. Germany still collects data according to NST/R but reclassifies them according to NST 2007 before the submission to Eurostat. For detailed information on the NST 2007 classification, please refer to ‘Ramon’, Eurostat’s Metadata Server).

Type of cargo is the appearance of the cargo unit on presentation for transportation. The provision of data according to the type of cargo is optional in the legal basis.

Tonne-kilometre (tkm): Unit of measure of goods transport that represents the transport of one tonne by road over one kilometre. The distance taken into account is the distance actually run. It excludes the distance covered when the goods road vehicle is being transported by another means of transport.

Data availability: The figures presented in this publication have been extracted from Eurostat’s free dissemination database and reflect the state of data availability on 15/12/2019.

Reporting countries use their own national surveys for the collection of data based on returns from road hauliers. The results are microdata referring to vehicles and their linked journeys providing detailed information on goods transported. At the European level, common aggregation procedures have been used that might diverge from national practices. Therefore differences might occur between the figures in this publication and national values.