European road freight transport continued to grow slowly, with an increase of 0.2 % between 2017 and 2018.

Germany continued to dominate European road transport in 2018, in terms of tonnes transported. 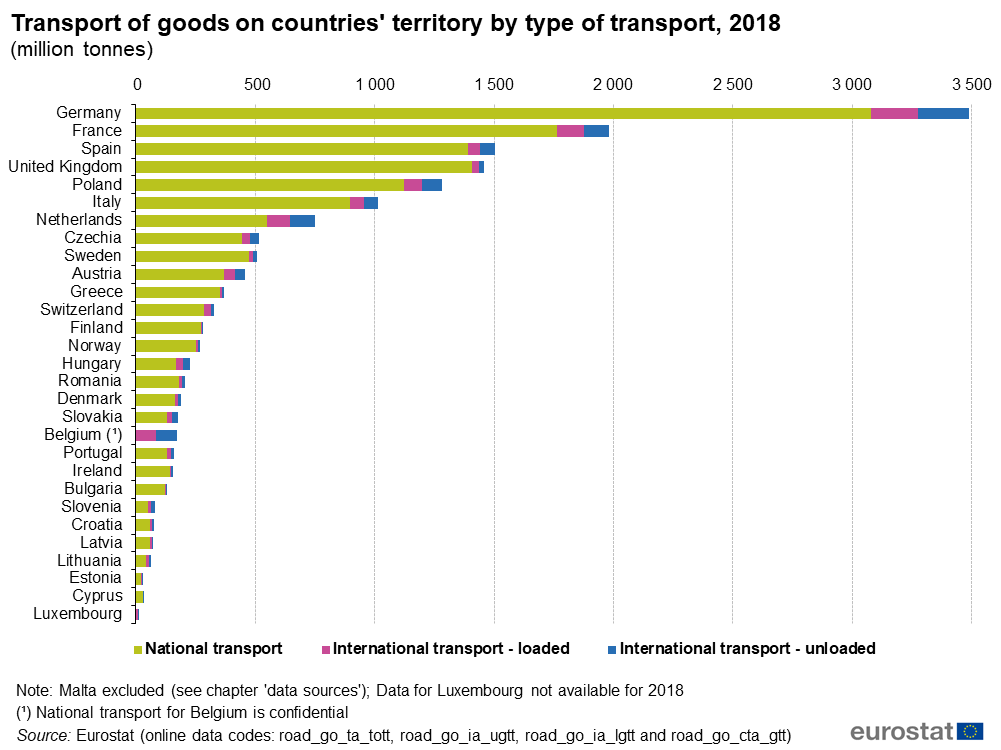 This article presents the main trends in road freight transport in the European Union (EU) up to and including 2018. National, international, cross-trade and cabotage transport are all analysed in this article. Road freight transport by type of goods and distance classes are also presented, as are goods moved on the national territory of countries and country-to-country flows.

EU cross-trade and cabotage transport, representing 11.5 % of total transport, recorded a decrease of 4.5 % over this period. Cross-trade transport decreased by 4.1 % while cabotage transport decreased by 6.4 %. After a long domination as one of the most significant countries for road transport in Europe, in 2018 Germany (16.5 % in EU total tkm) overtook Poland (16.4 %) in terms of total transport. Cyprus (8.0 %), Romania (7.4 %), Slovenia and Croatia (6.8 % each) were the Member States recording the highest rise in tkm performed from 2017 to 2018, while at the other end of the scale, Poland registered a substantial decline (5.8 %), followed by Hungary (4.4 %), Portugal (3.6 %) and Denmark (3.3 %). Croatia and Cyprus registered increases in all transport types, with rises of 6.8 % and 8.0 % respectively in total transport, while Poland registered decreases in all transport types (a decline of 5.8 % in total transport). Lithuania, Italy, Croatia and Austria recorded very strong growth for cabotage, while on the other side, Finland, the United Kingdom, Belgium and Czechia recorded the highest decreases. In cross-trade transport, Slovenia and Sweden experienced considerable increases, while Denmark and Hungary recorded substantial decreases. 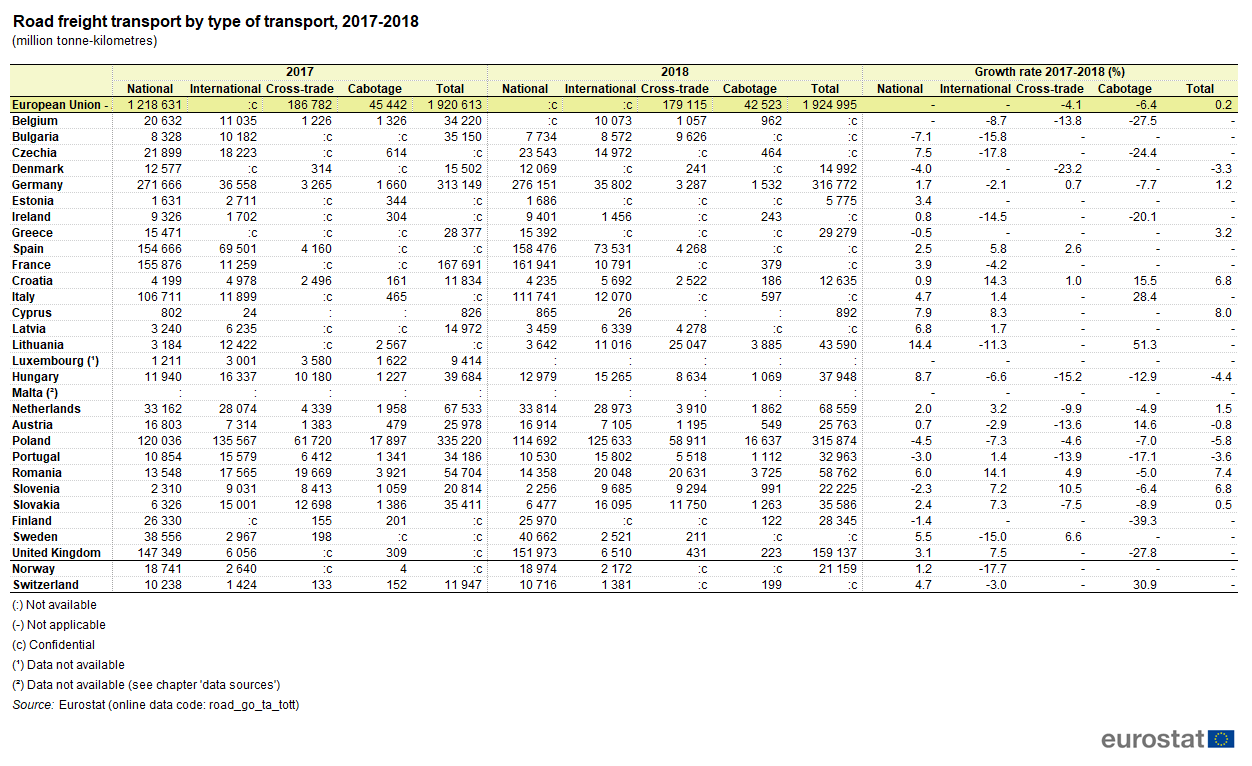 Mining and quarrying products: almost a quarter of total tonnage

In terms of tonnage, European road freight transport continued to increase in 2018 (1.3 % compared with 2017), reaching the highest value since 2014. 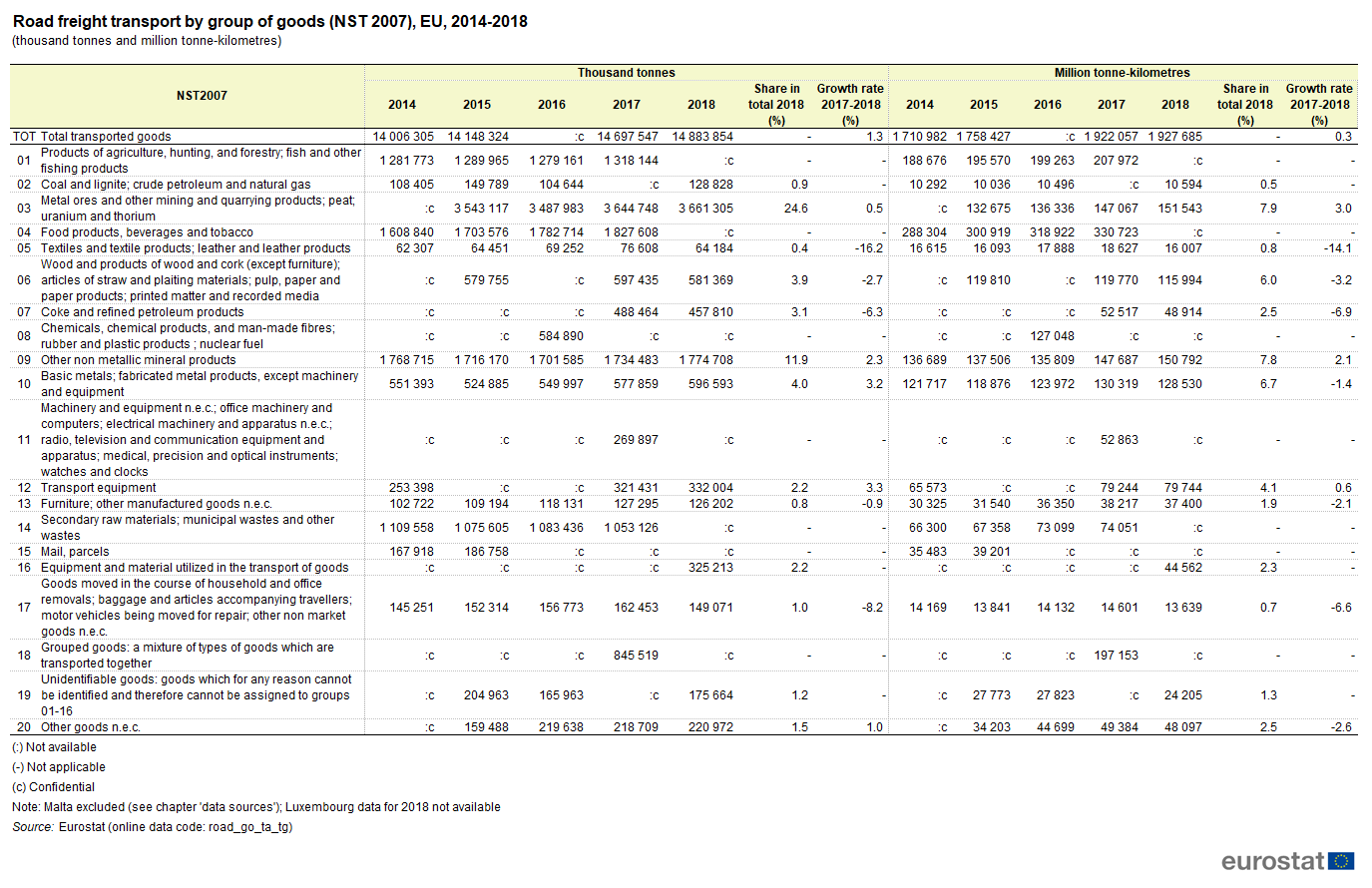 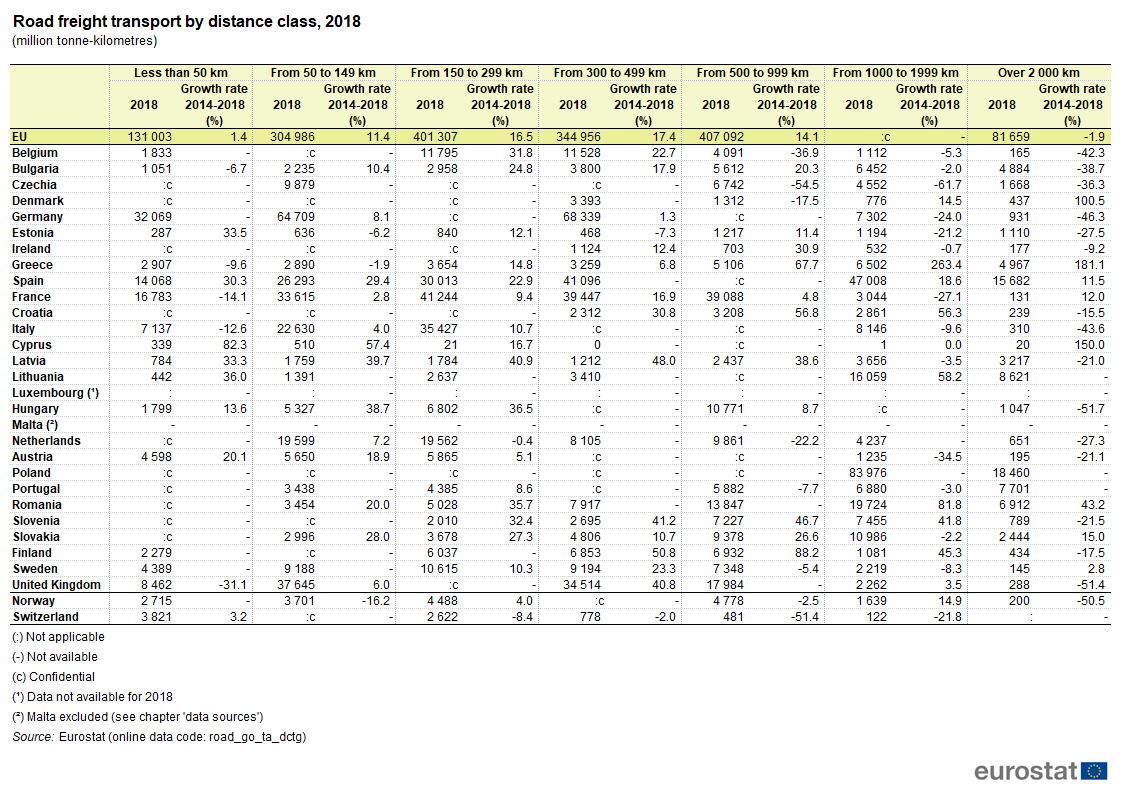 In term of transport of goods in the national territory, Germany, France, Spain, the United Kingdom and Poland continued to dominate European road transport in 2018, measured in tonnes. These countries accounted for 60.8 % of the total goods transported in the Member States of the European Union, with the goods transported in Germany representing 21.8 % of the total (see Figure 2). Considering international transport (i.e. goods entering and leaving the country, including cross-trade), the pattern did not change much over the last years. Goods movements in Germany remained the highest, ahead of France, the Netherlands and Belgium with its large North Sea ports. Thereafter followed Poland, Italy and Spain. Austria and Czechia recorded more international road transport than the United Kingdom.

At the more detailed level of country-to-country transport flows (see Table 4), the five non-EU states Switzerland, Norway, Russia, Turkey and Ukraine were important trading partners. Switzerland’s traffic was with Germany (23.4 % of the total extra-EU transport), France, Italy, Austria, the Netherlands, Poland and Belgium, while Norway had links with Sweden and Denmark. Russia transported goods mainly with Poland, Turkey with Bulgaria and Ukraine with Poland. 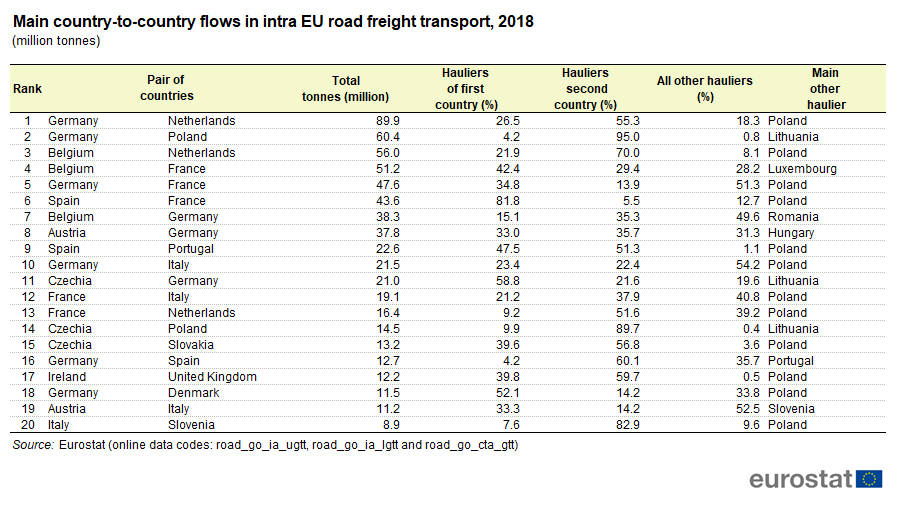 Road transport between two places (a place of loading and a place of unloading) located in the same country by a vehicle registered in that country.

International transport as presented in this publication is based on goods loaded and unloaded in the reporting Member States. Each reporting country reports all activities of a road motor vehicle inside and outside its national territory. There is thus no risk of double counting at European level.

Starting with the reference year 2008, Regulation (EC) No 1304/2007 establishes NST 2007 as the sole classification for goods carried in road freight transport. For detailed information on the NST 2007 classification, please refer to ‘Ramon’, Eurostat’s Metadata Server.

The volume of goods entering a country is the sum of international transport and cross-trade unloaded in the country by hauliers from all reporting countries.

The volume of goods leaving a country is the sum of international transport and cross-trade loaded in the country by hauliers from all reporting countries.

This Figure presents volumes moved on the territory of each country if there is loading or unloading of the goods. Transit where neither loading nor unloading takes place in the crossed country, is not included in this figure. The weight of goods in international transport is accounted for both in the country of loading and in the country of unloading. The weight of goods in national transport is accounted for only once.

Data availability: The figures presented in this publication have been extracted from Eurostat’s free dissemination database and reflect the state of data availability on 26/11/2019.

Reporting countries use their own national surveys for the collection of data based on returns from road hauliers. The results are microdata referring to vehicles and their linked journeys providing detailed information on goods transported. At the European level, common aggregation procedures have been used that might diverge from national practices. Therefore differences might occur between the figures in this publication and national values. For the distinction between national and international transport, journey information is used at the European level, which might cause differences in corresponding values from those countries that are using goods information for these statistics.