Germany is the country where almost half of EU cabotage was observed in 2017.

This article presents the road freight cabotage transport in 2017 in the European Union (EU), from the perspective of hauliers performing cabotage abroad and of the countries where cabotage takes place. Cabotage is freight transport carried out in a country by hauliers registered in another country. Since national transport markets are not yet fully liberalised, the level of cabotage, together with cross-trade, may be seen as a sign of market integration. 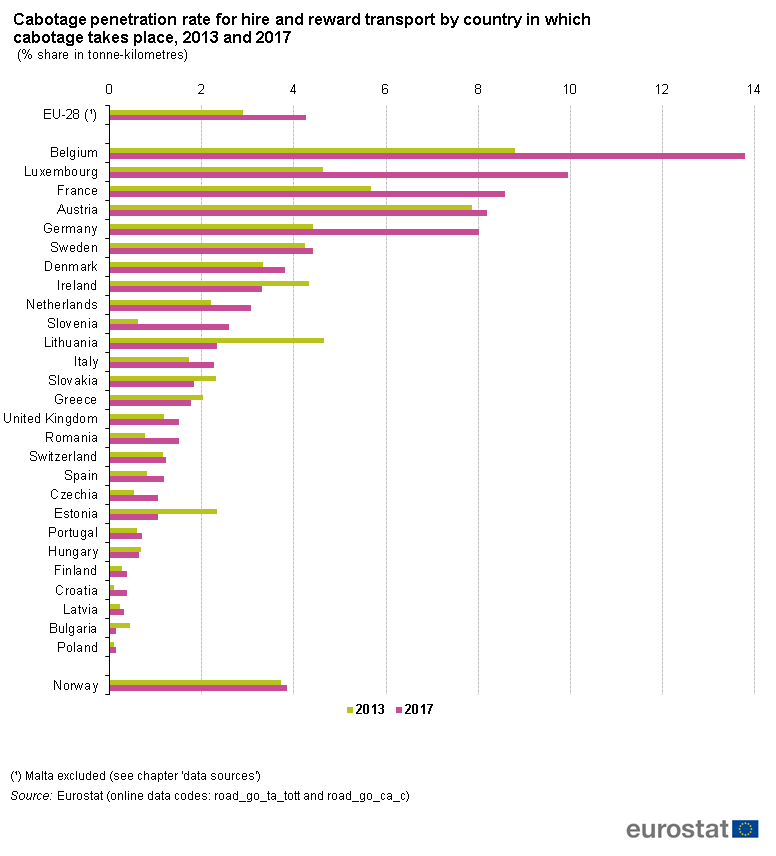 Concerning other transport markets, Spain (0.4 %) had much smaller penetration rates, while Poland (0.0 %) remained at the same level as in 2013 with little variations since then. 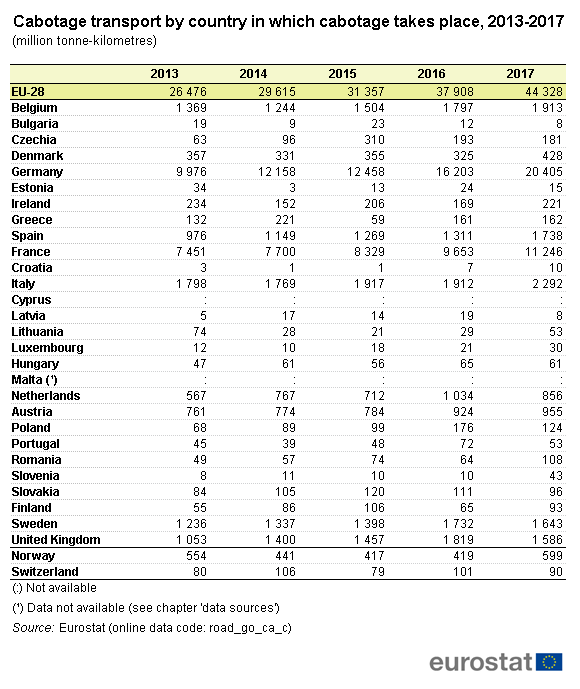 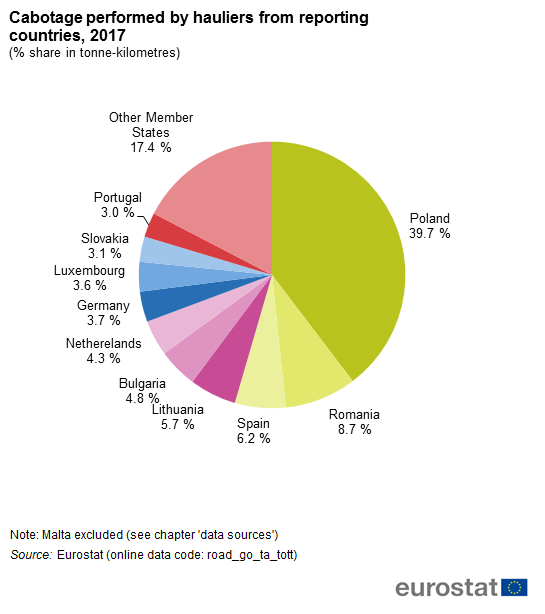 In terms of cabotage transport by country in which cabotage took place, Germany was on the first place with almost half of the total EU cabotage tkm performed on its territory. France was second, with a quarter of the total tkm, followed by Italy with a bit more than 5 % (see Figure 5). 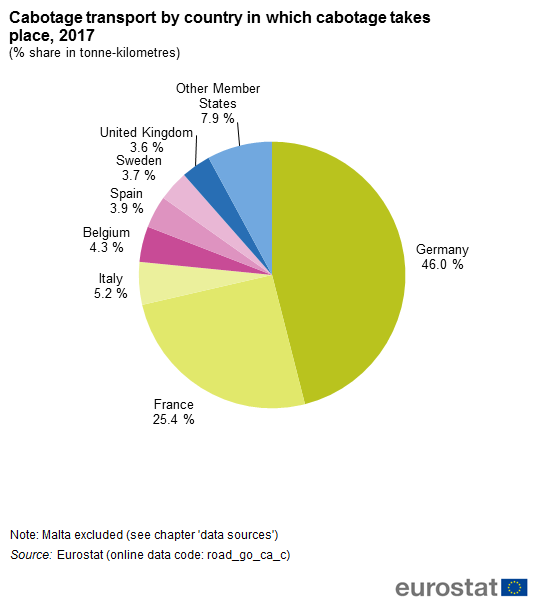 Cabotage is not always performed by a neighbouring country

Table 2 shows in which countries the top five cabotage performers carry-out cabotage transport. Until a few years ago most cabotage transport was carried in neighbouring countries. This has changed in recent years, in particular for hauliers from Poland, Romania, Lithuania and Bulgaria. 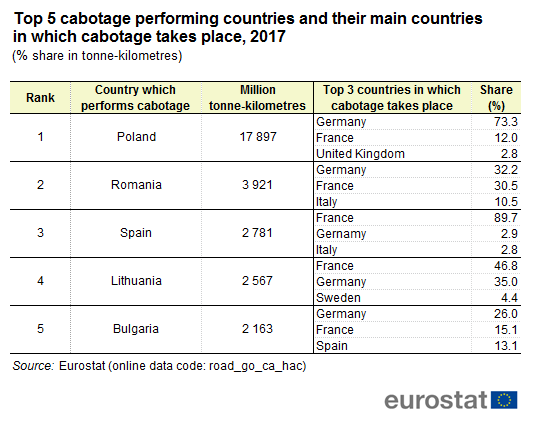 For the Polish hauliers, Germany accounted for almost three quarters of the cabotage performed in 2017, followed by France and the United Kingdom, while for the Romanian hauliers, Germany was again the recipient of almost a third of Romania's cabotage, followed by France and Italy. For the Spanish hauliers, France accounted for 89.7 % of cabotage performed in 2017 (mainly due to the fact that Spain is a major economy with a common land border with France), followed by Germany and Italy.

Lithuania performed the most cabotage in countries with which it had no land borders. Almost half of it took place in France, while more than a third took place in Germany, followed by Sweden. For the Bulgarian hauliers the cabotage was more evenly spread, with Germany accounting for a bit more than a quarter, followed by France and Spain with 15.1 and 13.1 % respectively, all of them with no land boundaries with Bulgaria.

Table 3 shows which countries performed cabotage in the 5 countries where the highest cabotage transport took place. Poland was the main caboteur in Germany (64.3 %), while Spain was the main one in France (22.2 %). 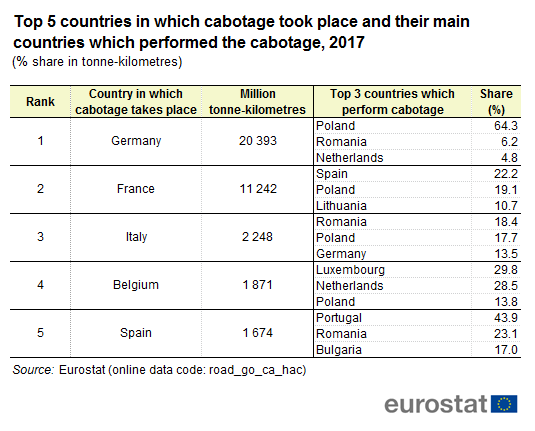 Table 3: Top 5 countries in which cabotage took place and their main countries which performed the cabotage, 2017
(% share in tonne-kilometres)
Source: Eurostat (road_go_ca_hac)

The 3 main countries performing cabotage activities in Italy had no common boundaries. The share of cabotage performed were: Romanian hauliers (18.4 %), Polish hauliers (17.7 %) and German hauliers(13.5 %). For hauliers from Belgium, the main country in which cabotage took place was Luxembourg (29.8 %), while for the Spanish hauliers it was Portugal (43.9 %).

Change in cabotage level by country 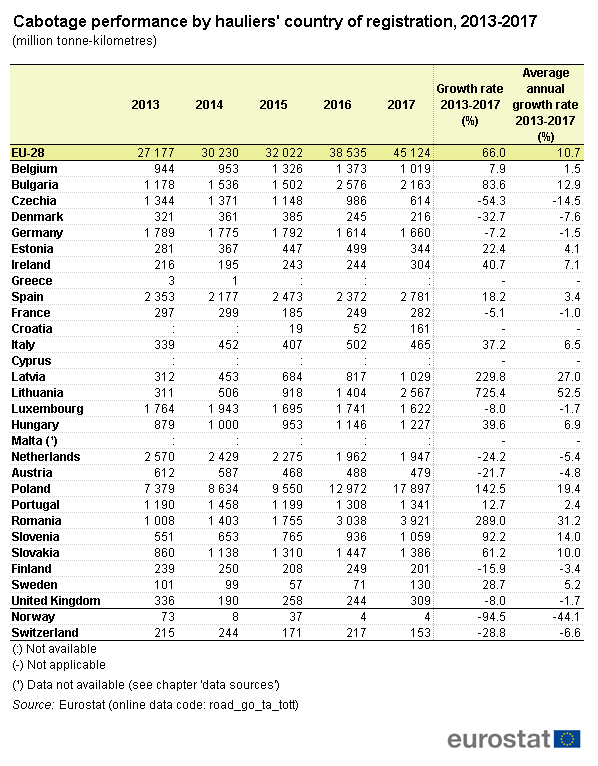 In five countries however, Czechia, Denmark, Luxembourg, the Netherlands and Finland, cabotage activity in 2017 reached its lowest level since 2013. Cabotage levels also showed falls in 2017 compared with 2013 in Germany, France, Austria and the United Kingdom, even if some increases were recorded in the most recent years.

Figure 4 and Figure 5 present countries with the highest cabotage performance increase and decrease between 2013 and 2017.

In the first case (see Figure 4), Lithuania recorded the highest cabotage performance increase in percentage, followed by Romania, Latvia, Poland and Slovenia. In terms of tkm, Lithiania recorded over this period an increase of 2 256 million tkm, Romania 2 913, Latvia 717, Poland 10 518 and Slovenia 508 million tkm. 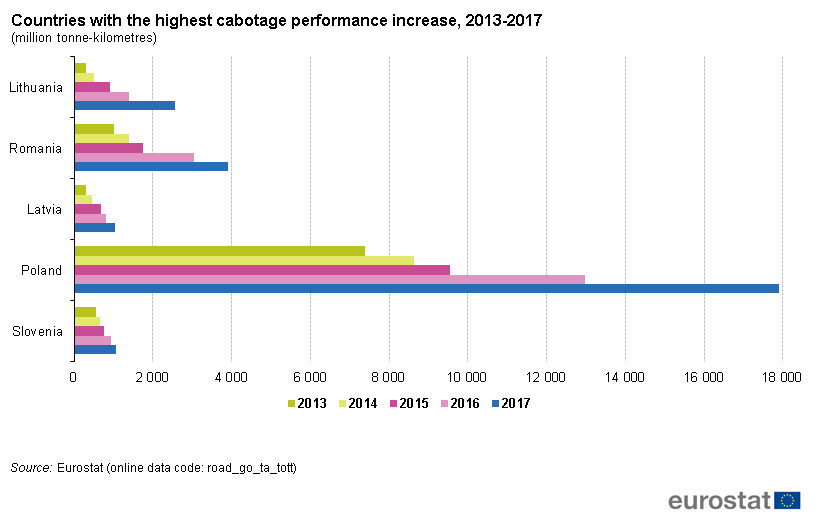 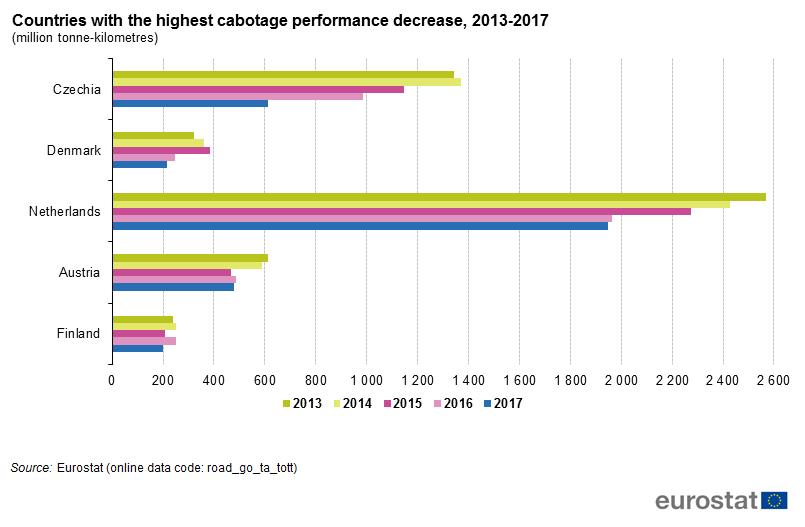 Tendencies in volume (tonnes) of goods transported in cabotage operations was similar to the tendencies in tonne-kilometers. Polish hauliers made the largest contribution to cabotage in terms of volume of goods transported in 2017, followed by Dutch hauliers. While there was a small decrease in volumes transported by Dutch hauliers since 2013 (-12.4 %), Polish hauliers doubled their cabotage performance (+126.6 %). The highest relative rises between 2013 and 2017, were registered by the Lithuanian (434.1 %) and Romanian hauliers (253.0 %), which reached the eight and third ranks respectively, followed by the Latvian (235.3 %) and Bulgarian hauliers (141.9 %) (see Figure 6). 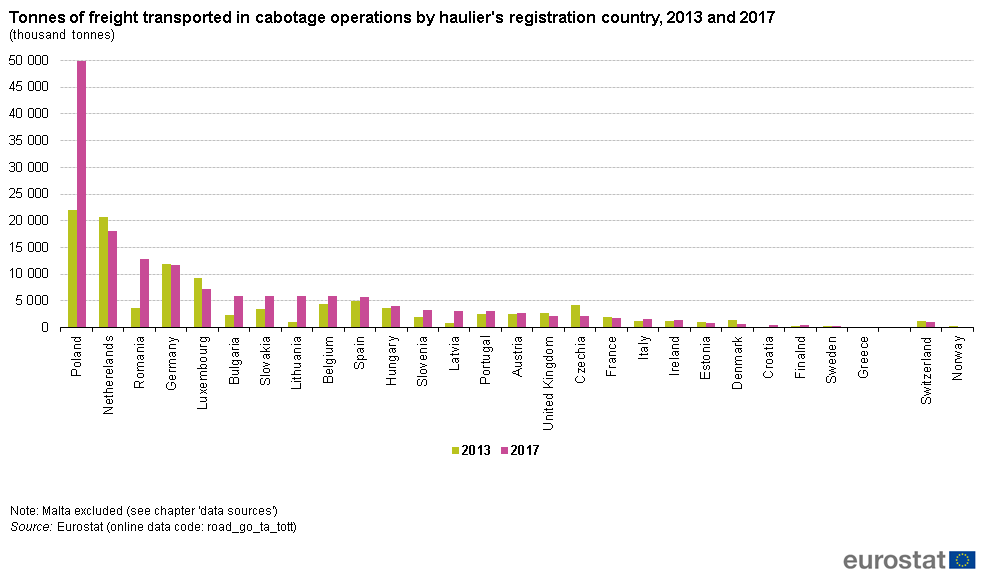 Figure 7 shows the development of road freight cabotage transport in terms of tonne-kilometres, tonnes and vehicle-kilometres (vkm), based on 2013=100. Since 2013, cabotage transport grew continuously and with similar trends for the three units, with however a smaller increase for tonnes. 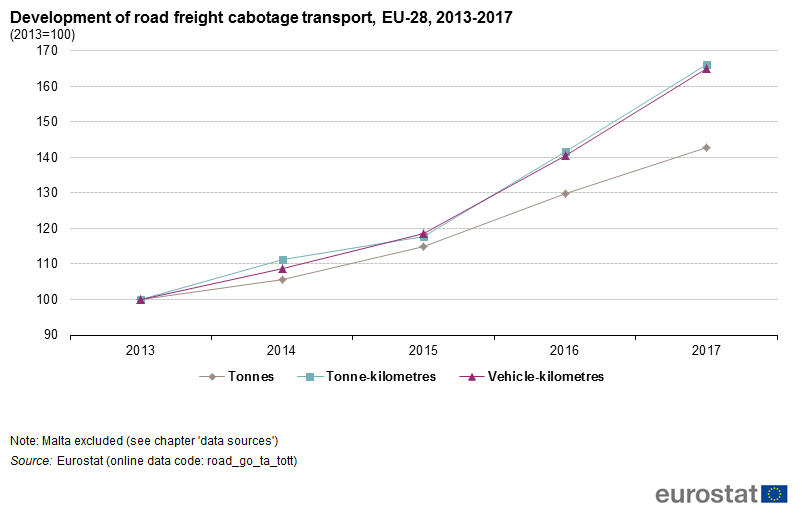 Croatia: While Croatia had no obligation prior to accession in 2013, it started reporting data for the reference year 2008.

Definition and history: Cabotage is declared by Member States for hauliers registered in their country that performed transport on the national territory of another country. From the point of view of the reporting country, it is considered as international transport, from the point of view of the movements of goods, it could be considered as national transport. With the aim of increasing transport efficiency and reducing the number of empty journeys, cabotage transport was gradually introduced in 1990 through authorization quotas (quantitative restrictions) and further liberalized in 1998 in the EU-15 (hauliers are allowed up to three cabotage operations within 7 days following an incoming international carriage). The cabotage regime was extended to the EFTA states (except Switzerland) following the creation of the EEA (European Economic Area). Cabotage between EU-15 and the Member States that joined the EU in 2004 was liberalized in May 2009 and in January 2012 for Bulgaria and Romania. Cabotage for Croatian hauliers is allowed in some EU Member States since July 2015 and should be extended to all Member States in July 2017.

Data availability: The figures presented in this publication have been extracted from Eurostat’s free dissemination database and reflect the state of data availability on 15/08/2018.

Reporting countries use their own national surveys for the collection of data based on returns from road hauliers. The results are microdata referring to vehicles and their linked journeys providing detailed information on goods transported. At European level, common aggregation procedures have been used that might diverge from national practices. Therefore differences might occur between the figures in this publication and national values. For the distinction between national and international transport, journey related information is used at European level, which might cause differences in corresponding values from those countries that are using goods-related information for these statistics.