Nuclear plants generated around 25 % of the electricity produced in the EU in 2017.

Electricity generation from nuclear plants in the EU increased by 5 % between 1990 and 2017. 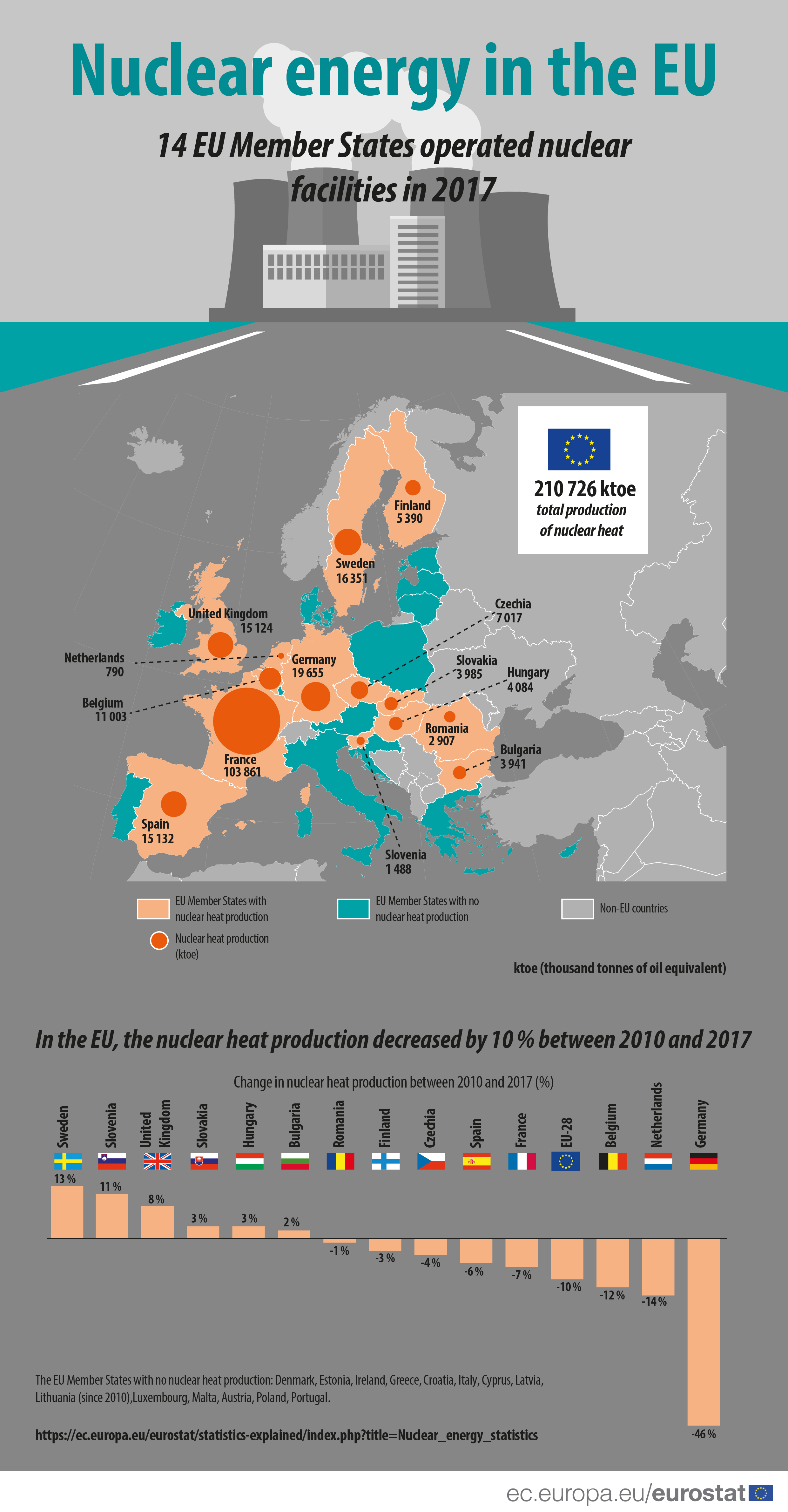 This article provides recent statistics on nuclear energy in the European Union (EU). The production of electricity in nuclear plants within the EU-28 countries peaked at 1 008.4 thousand gigawatt hours (GWh) in 2004, then slowly decreased to 829.7 thousand GWh in 2017. In 2017, nuclear plants generated around 25.1 % of the electricity produced in the European Union, with nuclear reactors operating in 14 Member States. While data for nuclear electricity generation are available from 1990 onwards, data for the rest of variables indicated in this article are only available from 2009 onwards.

The production of nuclear heat is considered in energy statistics as the energy source for nuclear energy, i.e. the total amount of heat obtained from the fission of nuclear fuels in nuclear reactors. This heat is subsequently used for the production of electricity or for other useful applications of heat. In 2017, there were nuclear reactors in operation in 14 EU Member States: Belgium, Bulgaria, Czechia, Germany, Spain, France, Hungary, the Netherlands, Romania, Slovenia, Slovakia, Finland, Sweden and the United Kingdom. There are no nuclear facilities in the other EU Member States. The total production of nuclear heat in the EU-28 in 2017 was 210 725 thousand tonnes of oil equivalent (toe), a decrease of 10.0 % compared with 2009. 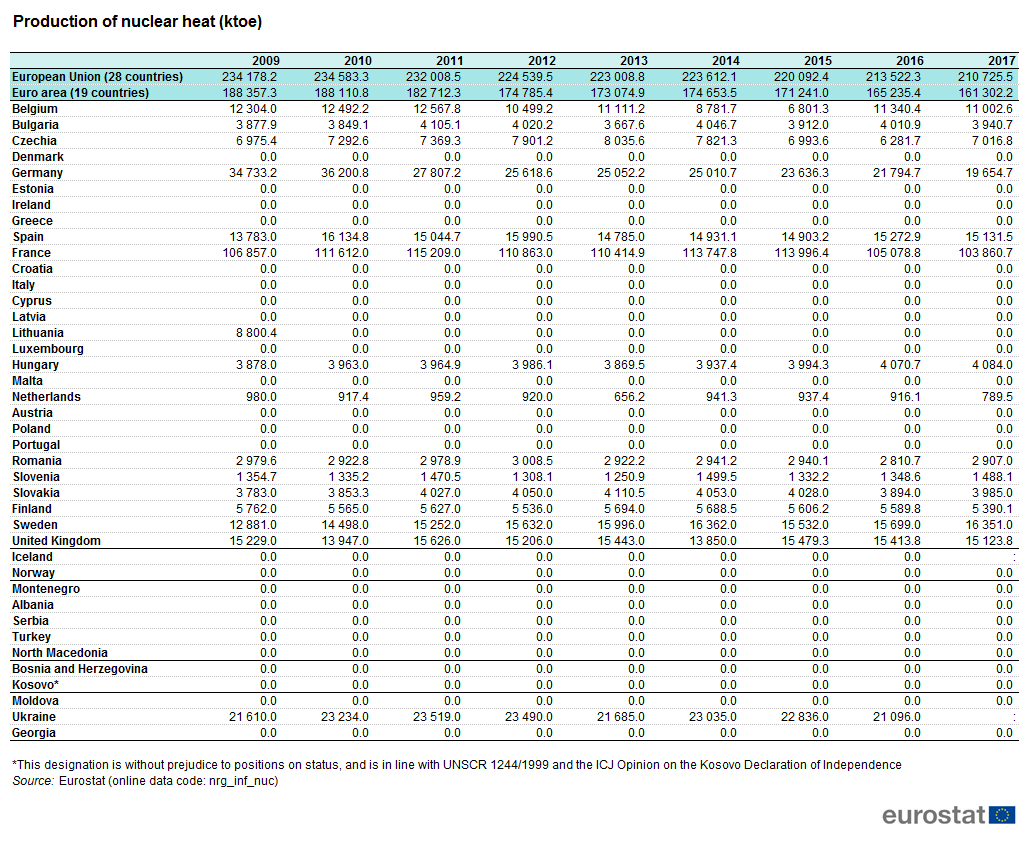 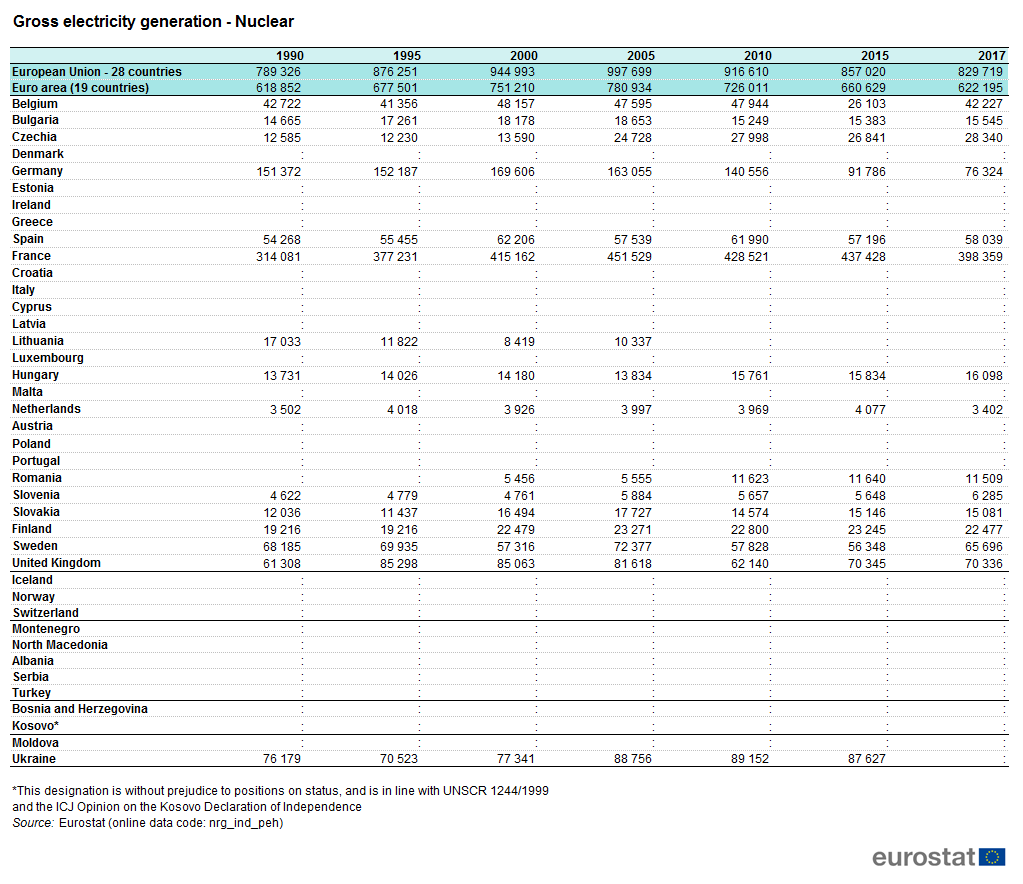 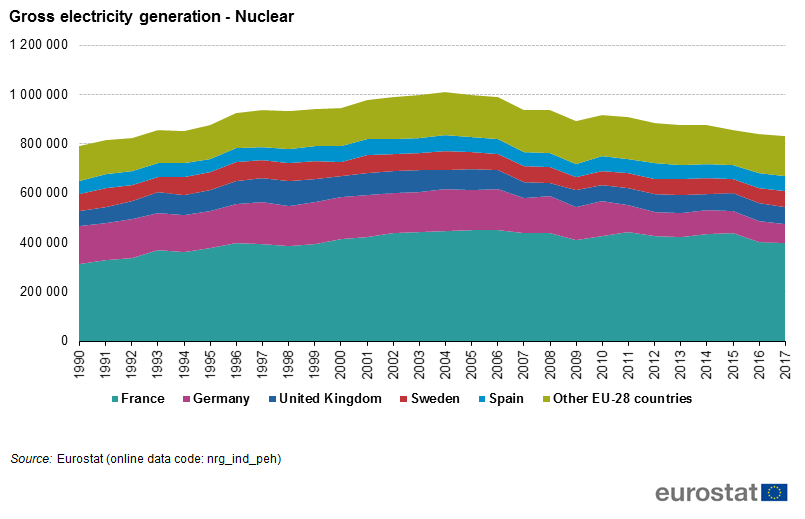 Uranium found in nature consists largely of two isotopes, uranium-235 (U-235) and uranium-238 (U-238), with around 0.7 % of the total being U-235 and the remaining 99.3 % mostly the U-238 isotope. U-238 does not contribute directly to the fission process (though it does so indirectly by the formation of fissile isotopes of plutonium). In order to obtain suitable nuclear fuel, it is necessary to proceed to an isotope separation to concentrate (‘enrich’) the U-235 isotope, from 0.7 % to 3-5 %.

Only four Member States operated enrichment plants in 2014: Germany, the Netherlands, France and the United Kingdom, bringing the total enrichment capacity of the European Union to 21 500 tSWU in 2017 (see Table 3).

Rods or other partial products are not included. Fabrication plants producing MOX (mixed oxide) fuel are also excluded (MOX plants reprocess the spent fuel to extract the remaining uranium and plutonium from the fission products and other actinides; the reprocessed uranium and plutonium is then reused in the reactors). Production and production capacity of fresh fuel elements are measured in tonnes of heavy metal (tHM). 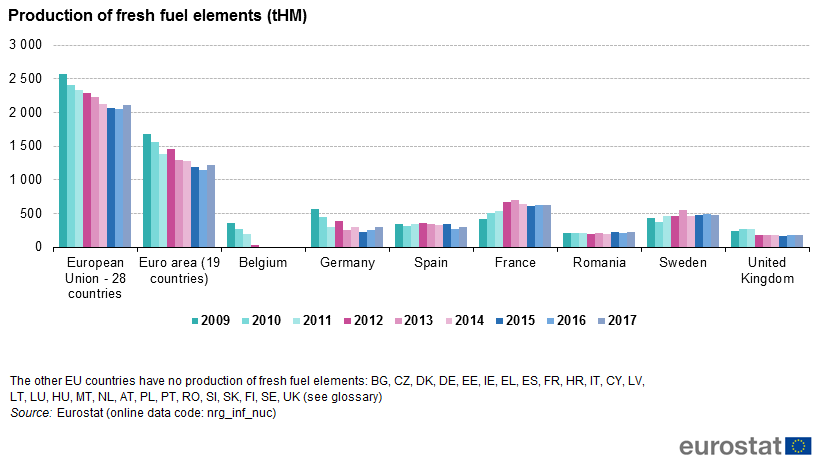 As shown in Table 6, only three countries produced MOX fuel elements in 2009: Belgium, France and the United Kingdom. However, the United Kingdom stopped its production in 2010 and Belgium in 2015. France is the only remaining Member State with a MOX production capacity (150 tHM) in 2017 (see Table 7).

Production and production capacity of uranium and plutonium in reprocessing plants

This section refers to the annual production and production capacity of uranium (U) and plutonium (Pu) in reprocessing plants, measured in tHM. Reprocessing consists of recovering fissile and fertile materials from used nuclear fuel in order to provide fresh fuel for existing and future nuclear power plants. The process of reprocessing used nuclear fuel allows the recovery of unused uranium and plutonium from the original fuel and reduces the volume of material to be disposed of as high-level waste.

As shown in Table 8, only two Member States operate nuclear reprocessing plants in the European Union: France and the United Kingdom.

Burnup refers to the extent to which nuclear fuel is consumed in a reactor and is a measure of how much energy is extracted from a primary nuclear fuel source. It can be measured as the actual energy released per mass of initial fuel in gigawatt-days per tonne of heavy metal (GWd/tHM). The increase of fuel burnup leads to a reduction in the volume of spent fuel discharged and longer fuel cycles in the reactor. The annual average burnup of definitively discharged irradiated fuel elements is the calculated average of the burnup of the fuel elements which have been definitively discharged from the nuclear reactors during the concerned reference year. It excludes fuel elements which are temporarily discharged and are likely to be reloaded again later. 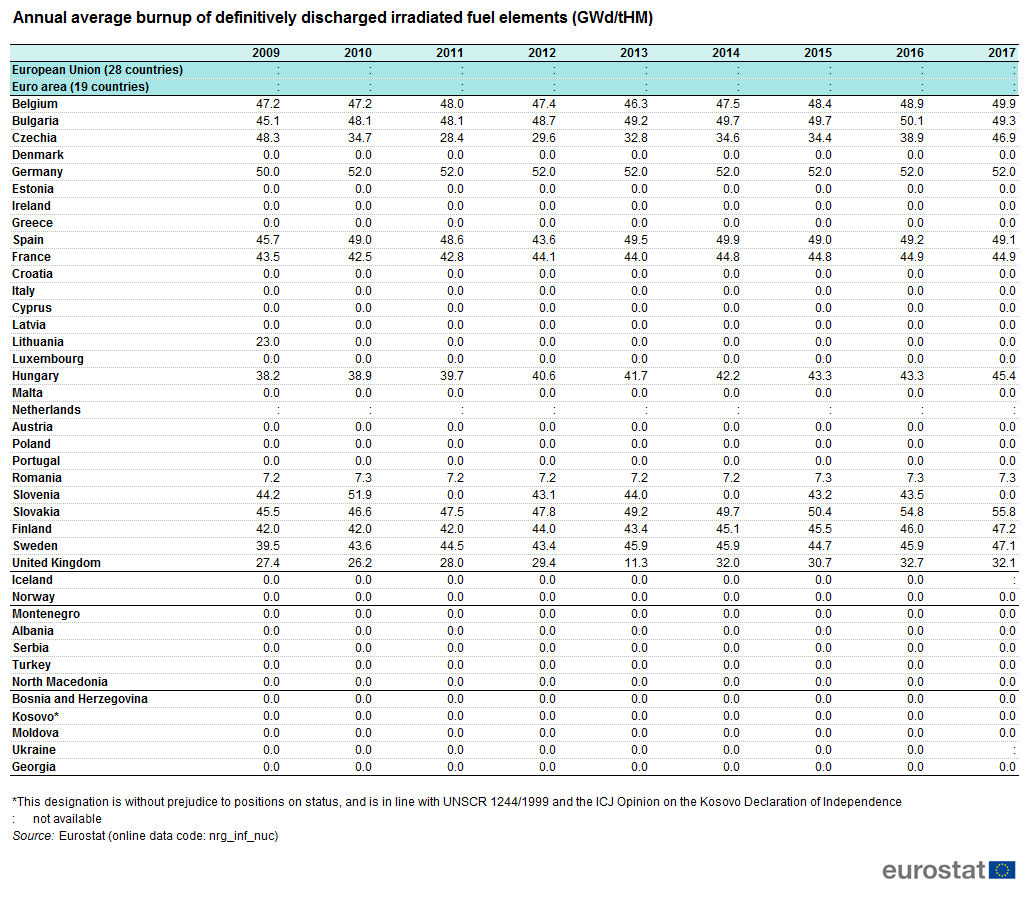 Data on annual nuclear energy statistics and data on the production of electricity have been used for all calculations. The most recent data available are for 2017. Data are available for all 28 EU Member States. In general, data are complete, recent and highly comparable across countries. This results in high accuracy.

The basis for nuclear energy in Europe was laid in 1957 by the European Atomic Energy Community (Euratom). The sector represents an important source of electrical energy, since nuclear power stations currently produce around a third of the electricity consumed in the European Union. It is up to each Member State to decide whether or not to pursue the option of nuclear power.

In June 2013, the European Commission proposed an amendment (COM(2013) 715 final) of the existing Directive establishing a framework for the nuclear safety of nuclear installations (Council Directive 2009/71). Among its many objectives the proposal aims to: set up an EU system of peer reviews for nuclear installations; increase transparency on nuclear safety matters; and establish new provisions for on-site emergency preparedness and response.

In order for the energy statistics system to assist political decision-making by the European Union and its Member States and promote public debate which includes citizens, it must afford guarantees of comparability, transparency, flexibility and ability to evolve. For these reasons, statistics on nuclear energy were incorporated in Regulation (EC) No 1099/2008 on energy statistics, as amended by the Commission Regulation (EU) No 147/2013, as regards the establishment of a set of annual nuclear statistics and the adaptation of the methodological references according to NACE Rev. 2, which sets the framework for the production, transmission, evaluation and dissemination of nuclear energy statistics. This Regulation states that statistics concerning the civil use of nuclear energy must be transmitted annually by Member States to Eurostat.