Nuclear plants generated around 28 % of the electricity produced in the EU-27 in 2018. 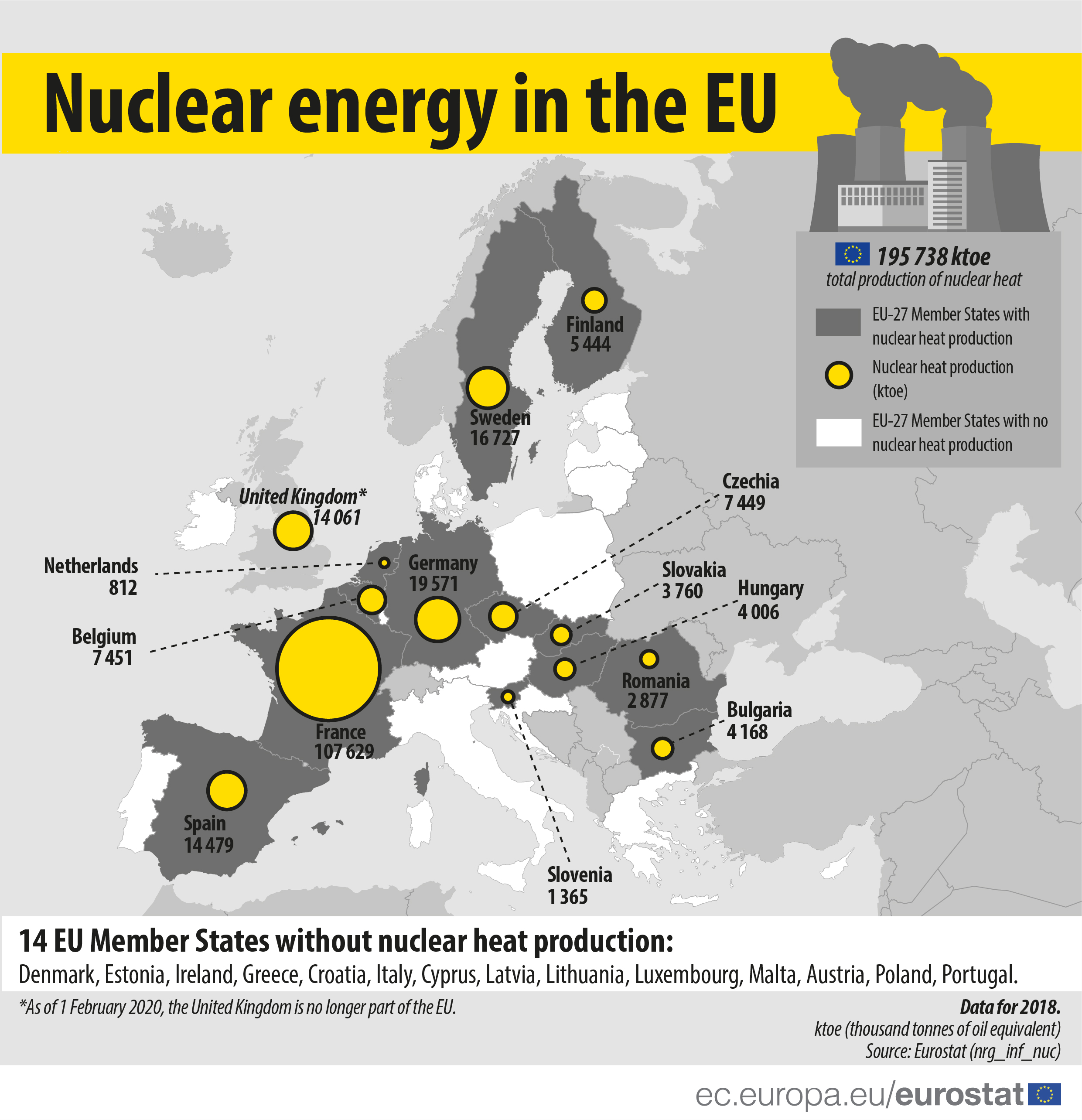 This article provides recent statistics on nuclear energy in the European Union (EU). 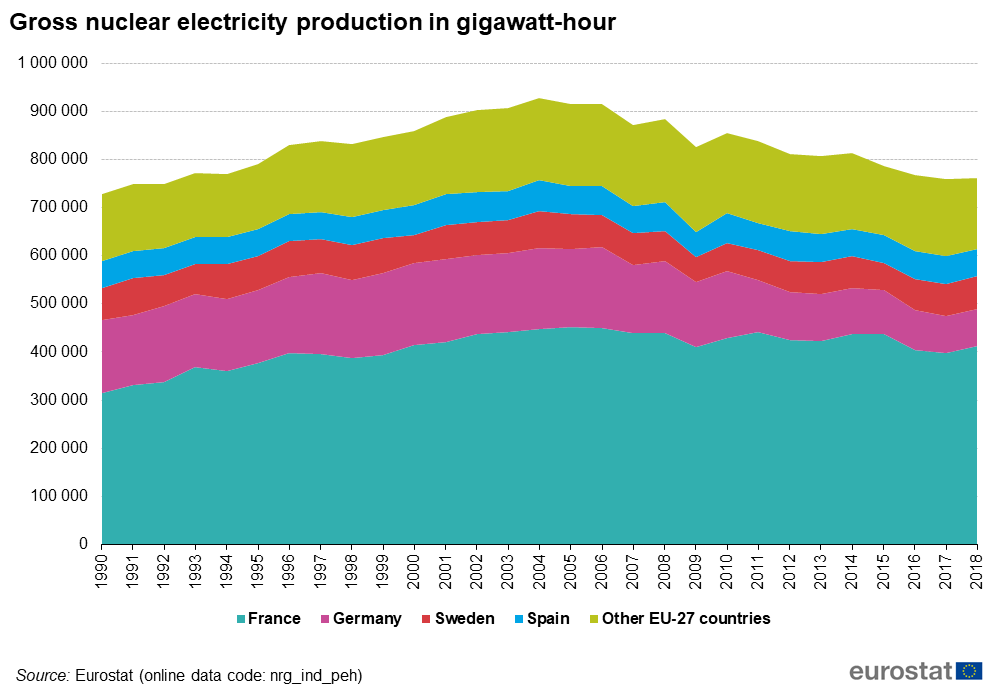 Uranium found in nature consists largely of two isotopes, uranium-235 (U-235, fissile) at 0.7 % and uranium-238 (U-238, non fissile) at 99.3 %. U-238 does not contribute directly to the fission process (though it does so indirectly by the formation of fissile isotopes of plutonium 239). Because of the small percentage of fissile material in the natural uranium and in order to obtain suitable nuclear fuel for the pressurised water reactors (PWR, the majority in Europe), it is necessary to increase the concentration (‘enrich’) of the U-235 isotope from 0.7 % to 3-5 %. There are two possibilities: the centrifugation or the diffusion of the uranium in gaseous form (hexafluorure UF6). As a result the natural uranium is separated into a small part of enriched uranium and a large part of depleted uranium. An exception is the Canadian "CANDU" reactors in Romania which use natural uranium and this technology does not require enrichment.

Only three of the EU-27 Member States operated enrichment plants in 2018: Germany, the Netherlands and France, bringing the total enrichment capacity of the European Union to 16 700 tSWU (see Table 3).

The fuel assembly constitutes the base element of the nuclear reactor core. The material used is the low enriched uranium (3 % to 4 % U235) produced by the enrichment plants.The standard pressured water reactor core contains about 157 fuel assemblies (depending on the reactor type). The uranium oxide (black powder) is pressed into pellets (small cylinders), then placed inside rods (tubes of about 1 cm diameter, 4 m length ) which finally constitute the assemblies. The term "fresh fuel" indicates that it is the first use of uranium extracted from mines contrary to the "MOX fuel" which is mainly made of recycled material. MOX (mixed oxide)assemblies are not included in this section but are covered separately in the section "Production of MOX fuel elements".

Production of fresh fuel elements are measured in tonnes of heavy metal (tHM).

The aim of the MOX use is the "recycling" of the remaining uranium and the plutonium, both extracted from the spent fuel in the reprocessing plants (97 % of the nuclear material can be reused). The MOX fuel is used mainly in France in a proportion of 1/4 to 1/3 of the total core fuel in some reactors. The production of MOX fuel elements is measured in tHM (tonnes of heavy metal).

As shown in Table 5, only two EU-27 countries produced MOX fuel assemblies in 2009: Belgium and France. However, Belgium stopped its production in 2015. In 2018, France was the only remaining Member State with a MOX production capacity.

Production of uranium and plutonium in reprocessing plants

This section refers to the annual production of uranium (U) and plutonium (Pu) in reprocessing plants, measured in tHM. Reprocessing consists of recovering fissile and fertile materials from used nuclear fuel in order to provide MOX fuel for nuclear power plants. The spent fuel, assembled in rods, is first dismantled, then cut in small pieces, before being chemically separated into uranium, plutonium and waste. 97 % of the nuclear material (U and Pu) is recycled and the remaining 3% highly radioactive waste material is vitrified and put into containers for long term storage.

As shown in Table 6, only one of the EU-27 Member States, France, operates a nuclear reprocessing plant.

Annual data on nuclear energy production of electricity have been used for all calculations. The most recent data available are for 2018. Data are available for all EU Member States. In general, data are complete, recent and highly comparable across countries.

The basis for nuclear energy in Europe was laid in 1957 by the European Atomic Energy Community (Euratom). The initial goal was to develop the civil use of nuclear material (for medical purposes, electricity production as examples). The sector represents an important source of electrical energy, since nuclear power stations currently produce around a third of the electricity consumed in the European Union.

Energy statistics inform the political decision-making in the European Union and its Member States. Statistics on nuclear energy were incorporated in Regulation (EC) No 1099/2008 on energy statistics. This Regulation states that statistics concerning the civil use of nuclear energy must be transmitted annually by Member States to Eurostat . This regulation was amended several times and the last amendment (Regulation (EU) 2019/2146) entered into force on 5/1/2020. The link to the legislation page on Eurostat's website is here.