On the occasion of European Organ Donor Day in October, we recently hosted a session of the European Parliament in Brussels, organised in cooperation with the Pulmonary Hypertension Association Europe (PHA Europe). Together with our colleagues Romana Tomc and Alojz Peterle, we saw this event as an opportunity to underline our concern for the thousands of patients across the EU on transplant waiting lists who will never have the procedures that would save their lives. Research shows that 16 patients die every day waiting for the organs they need. That's why increasing organ donation must remain a high priority for the EU, for Member State governments and for all citizens.

At the EU level, much effort has been invested through the 'EU Action Plan on Organ Donation and Transplantation' that has promoted training, cross-border exchange and sharing of best practices between Member States. Through the Public Health Programme, the Commission has co-funded several European projects to give practical support to Member States to help them improve their donation programmes. A series of workshops for journalists led to increased media coverage of this topic and helped to raise public awareness. Data published by the Council of Europe indicate that efforts are bearing fruit. There were over 800 more organ transplants in the EU in 2015, compared to 2014. This confirms an encouraging trend, with over 4000 additional transplants over 5 years, a 14% increase compared with 2010.

Sharing of organs is also becoming an important way to help patients. An IT-tool recently developed by the FOEDUS Joint Action has already been used to offer organs not allocated in their home country, enabling 23 transplants to take place during the pilot phase, mainly in children; that otherwise would not have been possible. Two further EU-funded projects, proposed by our MEP colleagues Karin Kadenbach and Gabriel Mato, are being launched this autumn and will run for 3 years. They aim to tackle chronic kidney diseases and improve donation and transplant systems through training and awareness raising activities, respectively.

All of this shows that when the EU pools its resources and expertise in this field, it can deliver real results for patients.  Now that the EU Action Plan has been completed and is under evaluation, it is time to think about the next steps. It's clear that much more needs to be done. Why can't  all Member States reach the donation rates seen in Spain and Croatia? The momentum gained via the action plan must be maintained and strengthened as we move forward.

Patient associations will play a critical role in promoting the idea of becoming an organ donor among the general public. PHA Europe is taking the lead in promoting a cross-condition Call to Action to improve donation and transplantation across the EU. Their members, as well as a number of leading EU-level and national organisations representing other conditions for which organ donation and transplant is highly relevant, are advocating for better awareness, availability and access to organ transplantation. We support the initiatives of patient associations in this field and urge Member States and the Commission to strengthen their efforts, in collaboration with civil society, to engage EU citizens and make it easy for all of us to help save lives by become organ donors.

Commissioner Andriukaitis gained particular insight on the subject of transplantation: as a young cardio-surgeon in the Santariškių hospital in Vilnius, he was in the operating room during the Baltic States' first ever heart transplant operation in 1987. Read his blog piece here.

This call aims to establish a list of eligible stakeholder organisations interested in participating in ad-hoc meetings between SoHO stakeholders and representatives of members of the Competent Authorities on Substances of Human Origin Expert Group.

Although organ transplants rose by 29% from 2006 to 215, there were still 59 thousand patients on the waiting lists as of 31 December 2015. See other figures and facts on this easy to read infographic.

The EU is working to increase the number of donors as well as to guarantee the quality and safety of the process from organ donation to transplantation. To this end, the Commission set ten priorities in an action plan that was completed in 2015. The outcomes are now under review.

This latest issue of Newsletter Transplant, published annually by the EDQM/Council of Europe, gives the international figures for 67 countries on organ, tissue and cell donation and transplantation for 2015. The data also include figures for waiting lists and family refusals.

International Transplantation Congress to be held in Barcelona in September 2017

Save the dates – 24 to 27 September 2017– to attend this congress with professionals in the field of transplantation.

ACCORD - Achieving Comprehensive Coordination in Organ Donation throughout the EU 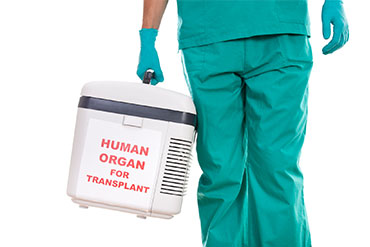 The European Society for Organ Transplantation

To Transplant and Beyond

The Declaration of Istanbul against Organ Trafficking