On May 20th, the new Tobacco Products Directive (TPD) became applicable in the EU Member States. The Directive is an important achievement for public health in the EU and aims in particular to discourage young people from smoking.

The Directive will bring major changes to the tobacco products sold in the EU. Flavoured cigarettes that are attractive to young people such as fruit or menthol will not be allowed. Cigarette packages will carry large combined health warnings that remind consumers of the risks of smoking. Tobacco companies will not be able to market their products through misleading terms such as ‘organic’ or ‘natural’. The Directive also addresses the illicit trade of tobacco products. New provisions for electronic cigarettes will ensure that these products are no longer unregulated in the EU and meet specific safety and quality requirements.

The past two years have been an intense time for those of us working in tobacco control.

The European Commission has adopted nine legal acts (eight implementing acts and one delegated act) containing the detailed technical rules needed to implement the TPD. These include the methods to determine flavours in tobacco products, the appearance of the new health warnings and rules for refillable electronic cigarettes.

The European Parliament and the Council have defended the Directive in three separate cases brought by the industry and one Member State. On May 4th, the Court of Justice declared the Directive valid on all points, confirming its internal market basis and ensuring that its public health benefits are not lost.

Member States have also worked hard to transpose the Directive. Many have introduced complementary or further measures in their Tobacco Acts such as plain packaging, advertising restrictions or smoke-free environments legislation.

For those of us working in the tobacco control community, the fight for a health oriented and evidence based TPD was a huge task – especially when faced with massive lobbying by the tobacco industry and its allies. This difficult task also continued in the Member States as we supported them to transpose the Directive.

The application of the TPD across the EU is a big step forward to ensure the health of all our citizens. We have seen that smoking prevalence is falling in the EU. The TPD should reinforce that trend and ensure that fewer young people take up this deadly habit.

As of 20 May, all EU countries must comply with the Tobacco Products Directive

The Directive includes measures on packaging, flavourings, additives, e-cigarettes and more. To see the Statement by Commissioner Andriukatis and the Infographic and Memo with details on the key changes for tobacco products sold in the EU, please click here:

Eight Implementing Acts adopted by the Commission in 2015 and 2016

The European Commission has adopted eight implementing acts that lay down more detailed technical rules on tobacco and electronic cigarettes. The acts cover packaging and labelling, tobacco ingredients regulation and reporting and e-cigarettes regulation and notification.

World No Tobacco Day 31 May 2016: Get Ready for Plain Packaging

On World No Tobacco Day, countries are being asked to get ready for plain packaging. Plain packaging makes tobacco products less attractive by limiting the possibility of using packages to advertise and promote tobacco and by increasing the effectiveness of health warnings.

The Directive on Tobacco Products is lawful, says the European Court of Justice

On 4 May, the Court concluded that the Directive was adopted in accordance with the EU Treaties and confirmed that the TPD does not prevent Member States from introducing plain packaging.

SCENIHR Final Opinion on the Additives used in tobacco products

The European Commission and its independent Scientific Committee on Emerging and Newly Identified Health Risks (SCENIHR) have published the final Opinion on Additives used in tobacco products. The SCENIHR identified 48 single chemicals that would warrant further study.

A number of Member States have notified the Commission of their intention to introduce measures that go beyond the Tobacco Products Directive, such as plain packaging. More info on the 2015/1535 procedure and a database of notifications can be found on the technical regulations website. 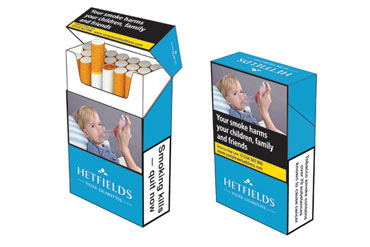 Study on the submission of data for tobacco and related products

This study provided input for the development of a common EU reporting format for the submission of data for tobacco and related products required by the Tobacco Products Directive.

This study presents input for the EU secondary legislation under the Tobacco Products Directive on the layout, design and shape of health warnings on tobacco packages.

This Analysis and Feasibility Assessment study details the main components necessary for a future track and trace solution in the EU.