In 2019, the Western Balkans countries were generally less dependent on energy imports than the EU, while Turkey was more dependent.

The electricity generated from renewable energy sources was higher in Albania, Montenegro, Bosnia and Herzegovina and Turkey than in the EU in 2019.

This article is part of an online publication and provides information on a range of energy statistics for the European Union (EU) candidate countries and potential candidates, in other words the enlargement countries. Montenegro, North Macedonia, Albania, Serbia and Turkey currently have candidate status, while Bosnia and Herzegovina as well as Kosovo* are potential candidates.

The article presents an overview of main energy indicators, notably primary energy production, trade of primary energy, and energy consumption, as well as information on the use of renewable energy sources for electricity generation.

In 2019, the primary energy production of the candidate countries and potential candidates amounted to 42 million tonnes of oil equivalent (toe), 6.7 % lower than in 2009 (2009 data not available for Bosnia and Herzegovina).

The structure of primary energy production is largely determined by a territory’s natural resources and also by its strategic policy decisions which affect the development of particular energy sources, such as the renewable energy sources. Among the candidate countries and potential candidates, solid fuels was the predominant energy source in 2019. More than three quarters of Turkey’s (83.3 %), Kosovo’s (81.3 %) and North Macedonia’s (75.3 %) energy production was from solid fuels and this was also the main source of primary energy production — accounting for more than half of all primary production — in Serbia (66.8 %), Bosnia and Herzegovina (63.0 %) and Montenegro (53.8 %). Albania was an exception as solid fuels contributed only 3.0 % of primary production while the contribution of petroleum products was 57.9 %, far higher than in any of the other candidate countries and potential candidates: 14.8 % in Turkey and 9.2 % in Serbia (the rest of the candidate countries and potential candidates do not produce petroleum products). Close to half of Montenegro’s primary energy production came from renewables and biofuels (46.2 %), while it was more than a third in Bosnia and Herzegovina (37.0 %) and Albania (35.8 %); North Macedonia’s contribution from renewables and biofuels was 24.7 %, followed by Serbia (20.6 %) and Kosovo (18.7 %). Turkey didn’t report any contribution from renewables and biofuels. In 2019, nuclear (the main source under ‘Others’ in Table 1) and renewable energy sources made up just over two thirds (70.9 %) of the energy production in the EU. By contrast, only 17.0 % of its primary energy production came from solid fuels and 3.7 % from petroleum products.

Between 2009 and 2019, the ratio of electricity produced from renewable energy sources to electricity consumption increased in all candidate countries and potential candidates. The highest increase was in Turkey, 23.9 percentage points (pp). It was followed by Albania (17.7 pp), North Macedonia (8.3 pp), Bosnia and Herzegovina (6.6 pp), Montenegro (6.0 pp), Kosovo (4.0 pp) and Serbia (1.9 pp). It should be noted that hydro-power was often the major source of renewable energy used for electricity generation in the candidate countries and potential candidates, the output of which is dependent on the amount of rainfall, which varies — sometimes greatly — from one year to the next.

The energy dependency rate shows the proportion of energy that an economy must import. It is defined as net energy imports divided by gross available energy, expressed as a percentage. A positive dependency rate indicates a net importer of energy while a dependency rate in excess of 100 % indicates that energy products have been stocked. In 2019, only two candidate countries recorded energy dependencies of more than 50 %: Turkey (70.0 %) and North Macedonia (58.5 %). The other candidate countries and potential candidates recorded rates of around 30 %: Serbia with 35.6 %, Montenegro 32.9 %, Albania 31.5 %, Kosovo 30.5 % and Bosnia and Herzegovina with 27.4 % (see Figure 2).

The amount of electrical energy produced by transforming other forms of energy is called gross electricity generation and is expressed in gigawatt hours (GWh). The electricity generation can vary greatly when the main source is hydro-, wind- or solar-power. In the following description of developments between 2009 and 2019, the 2009 value for each country is regarded as the base value (100 points) to which other years' values are compared.

The gross electricity generation in Turkey had a steady year-to-year increase between 2009 and 2019, increasing by 55.5 points over this period (see Figure 3).

There is not enough data available for Bosnia and Herzegovina.

In the EU, the electricity generation was rather steady, with very small variations. Between 2009 and 2019 it increased by 2.2 points. 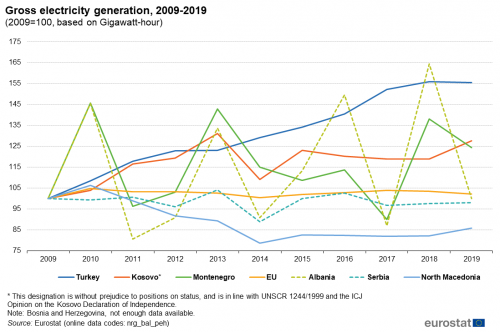 Gross inland energy consumption is an indicator of the overall energy needs of an economy, these being met by primary production and net imports (with data also reflecting changes in stocks and bunkers). In the following description of developments between 2009 and 2019, the 2009 value for each country is regarded as the base value (100 points) to which other years' values are compared.

Kosovo and Albania recorded similar increases between 2009 and 2019 (8.5 points and 8.4 points, respectively). Nevertheless, the trends over the years were different, as can be seen in Figure 4.

Serbia’s and North Macedonia’s gross inland consumption was relatively steady between 2009 and 2019 (+1.2 points and +0.9 points, respectively). 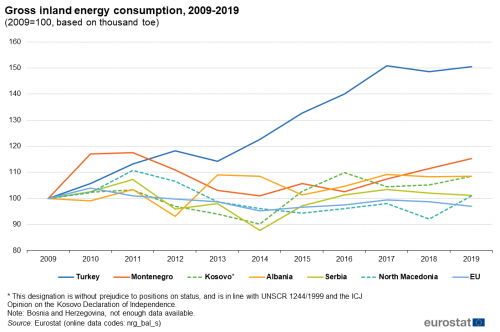 High energy intensity in the candidate countries and potential candidates, particularly in Bosnia and Herzegovina, Kosovo and Serbia

Energy intensity is a measure of the efficiency with which an economy consumes energy to produce output, with gross domestic product (GDP) being used as the measure of overall output: it is expressed as units of energy consumed per unit of GDP, the latter in constant prices (or using chain-linked volume data) to remove the effects of inflation. As well as reflecting the efficiency of transforming energy sources (for example to electricity) or converting energy to heat, motion, light and other uses, this measure also depends on a range of factors, such as the structure of an economy, the climate, the standard of living and transportation patterns/preferences, to name but a few.

Higher shares of final energy consumption in transport and households

The share of final energy consumption in other sectors was in general the smallest in the candidate countries and potential candidates, ranging from 13.3 % in Kosovo to 24.4 % in Turkey. 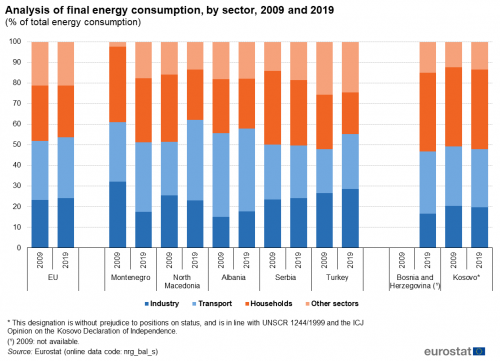 The highest changes in the share of final energy consumption between 2009 and 2019 were recorded in Montenegro where the share in other sectors went up by 15.3 pp, while the share in industry went down by 14.7 pp.

In order to meet the increasing requirements of policymakers for energy monitoring, Eurostat has developed a coherent and harmonised system of energy statistics. As well as covering EU Member States and EFTA countries these data are also collected from the candidate countries and potential candidates. Time series are generally available from 1990 onwards. The collection of energy data is based on Regulation (EC) No 1099/2008 of the European Parliament and of the Council of 22 October 2008 on energy statistics.

Data are available for a variety of fuel types, namely solid fuels, crude oil and petroleum products, natural and derived gases, nuclear heat, electricity, waste and renewable energy sources. Basic data on energy quantities are in fuel specific units, such as liquid fuels in thousand tonnes, electricity in kilowatt-hours; these units are converted to common energy units (such as toe to allow the addition or comparison of data for different energy sources). While basic principles and institutional frameworks for producing statistics are already in place, the enlargement countries are expected to increase progressively the volume and quality of their data and to transmit these data to Eurostat in the context of the EU enlargement process. EU standards in the field of statistics require the existence of a statistical infrastructure based on principles such as professional independence, impartiality, relevance, confidentiality of individual data and easy access to official statistics; they cover methodology, classifications and standards for production.

A competitive, reliable and sustainable energy sector is essential for all economies. The energy sector has been under the spotlight in recent years due to a number of issues that have pushed energy to the top of national and EU political agendas, for example, concerning the security of supply of fossil fuels and the impact of the production and consumption of energy on the environment.

In November 2010, an initiative titled Energy 2020 a strategy for competitive, sustainable and secure energy (COM(2010) 639 final) was adopted by the European Commission. This strategy defined energy priorities for a period of 10 years and put forward actions that might have been taken in order to tackle a variety of challenges, including: achieving a market with competitive prices and secure supplies; boosting technological leadership; and effectively negotiating with international partners (for example, to pursue good relations with the EU’s external suppliers of energy and energy transit countries). This work has been further developed through a 2030 energy strategy which provides a policy framework for climate and energy policy to 2030 and a 2050 energy roadmap (see COM (2011) 112 final) which set a long-term goal of reducing the EU’s greenhouse gas emissions by 80-95 % by 2050. The Commission has proposed a European Climate Law to turn this political commitment into a legal obligation.

The energy community was established as an international organisation in 2006 and currently includes the EU and several non-member countries, namely Albania, Bosnia and Herzegovina, Kosovo, North Macedonia, Montenegro and Serbia among the candidate countries and potential candidates, as well as Georgia, Moldova and Ukraine; Norway, Turkey and Armenia have observer status. The aim of the energy community is to extend the internal market concerning energy to south-east Europe and beyond. The objectives are to:

In response to continuing concerns about the EU’s dependency on energy imports, in May 2014 the European Commission released its Energy Security Strategy (COM(2014) 330 final) which aims to ensure a stable and abundant supply of energy. As well as short-term measures looking at the impact of a halt to Russian gas imports or a disruption of imports through the Ukraine, the strategy addressed long-term security of supply challenges and proposed actions in five areas, including: increasing energy production in the EU and diversifying supplier countries and routes, and speaking with one voice in external energy policy. In 2015, the European Commission released a Communication concerning A framework strategy for a resilient energy union with a forward-looking climate change policy (COM(2015) 80 final) which argued that one important element in ensuring energy security (in particular for gas) was full compliance of agreements related to buying energy from non-member countries. This was followed in February 2016 by European Commission proposals for new rules on EU gas supply security (COM(2016) 52 final) and new rules for energy agreements between EU and non-EU countries (COM(2016) 53 final).