EU's material footprint amounted to 14.0 tonnes per capita in 2017. 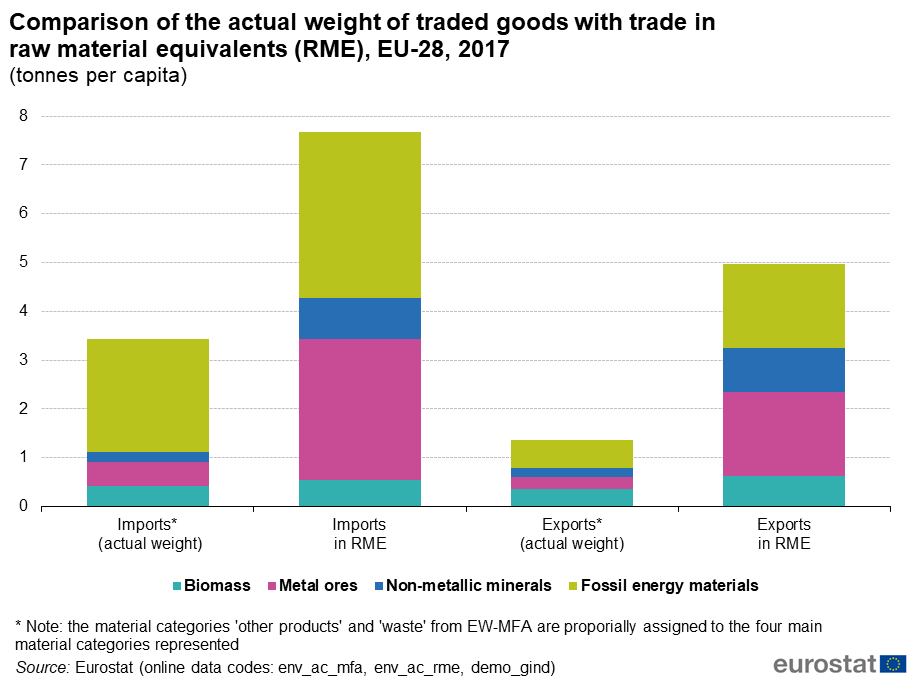 This article presents the global material footprints of the European Union (EU). Material footprints quantify the worldwide demand for material extractions (biomass, metal ores, non-metallic minerals and fossil energy materials/carriers) triggered by consumption and investment by households, governments and businesses in the EU.

As part of the material flow accounts, Eurostat produces indicators among which is the indicator domestic material consumption (DMC). Those accounts, however, do not provide an entirely consistent picture of global material footprints because they record imports and exports in the actual weight of the traded goods when they cross country borders instead of the weight of materials extracted to produce them. As the former are lower than the latter, economy-wide material flow accounts (EW-MFA) and the derived DMC underestimate the material footprint. To adjust for this, the weight of processed goods traded internationally is converted into the corresponding raw material extractions they induce.

The data presented in this article are based on import and export flows expressed in their raw material equivalents (RME). These are estimated for the aggregated EU economy by Eurostat with models that are still under development and therefore do not produce official statistics yet. The results have a higher statistical uncertainty. According to the estimates in this article, EU imports in 2017 were 2.2 times higher when expressed in RME than imports recorded in EW-MFA. Exports were 3.6 times higher. The derived global material footprint, also referred to as raw material consumption (RMC), was 14.0 tonnes per capita in the EU in 2017 and 4.8 % higher than DMC.

Accounting for trade flows in terms of raw materials equivalents

It is important to realise that, in general, trade flows expressed in RME are larger than the actual weight of the products traded. Almost all products go through different stages of manufacturing, starting from the extraction of raw materials, then the transformation into raw products, followed by further processing and assembly into semi-manufactured products and finally into finished products. The mass weight of the extracted raw materials, e.g. gross ore, is generally much higher than the weight of the traded products that contain the processed material only.

For example, while the concentration of metals in extracted metal ores is often less than 1 %, the metal content of concentrates and basic metals is much higher or even close to 100 %. This means that extracting concentrates and basic metals from virgin metal ores, often done in non-EU countries and reflected in EU imports, results in a much higher RME than the actual weight of the traded goods. Hence, it is not surprising that the largest difference between the actual weight of imports and imports in RME is found for metal ores: 2.4 tonnes per capita in 2017. The basic metals are usually further treated in the EU and integrated into final goods. These goods are then consumed in the EU or exported.

For exports, the largest difference is found for the same material: metal ores. However, the different material categories contribute more evenly to the difference than for imports.

There are several other causes for the differences, although these cannot be directly identified in Figure 1. An important source of difference is that not all extracted materials required for producing a product necessarily become part of the product. For example, some products may require energy-intensive processing for which fossil energy carriers need to be extracted, but these are not represented in the mass weight of the product itself. This is also known as indirect material use. Generally, high-end consumer durables that require much processing and consist of many different parts will require more indirect use of materials than basic products. Another source of difference is due to the fact that in EW-MFA each traded product is assigned to one material category only, whereas traded products in RME are recorded with the whole range of materials that have contributed directly or indirectly to the production of the traded product.

The adjustment of the trade flows from actual weight when crossing the border to RME also impacts the material flow indicators. The main RME-based indicator is raw material consumption (RMC), which mirrors DMC from the EW-MFA. It is also referred to as the EU's material footprint. RMC represents the total amount of extracted raw materials needed to produce the goods and services consumed by residents of the EU. 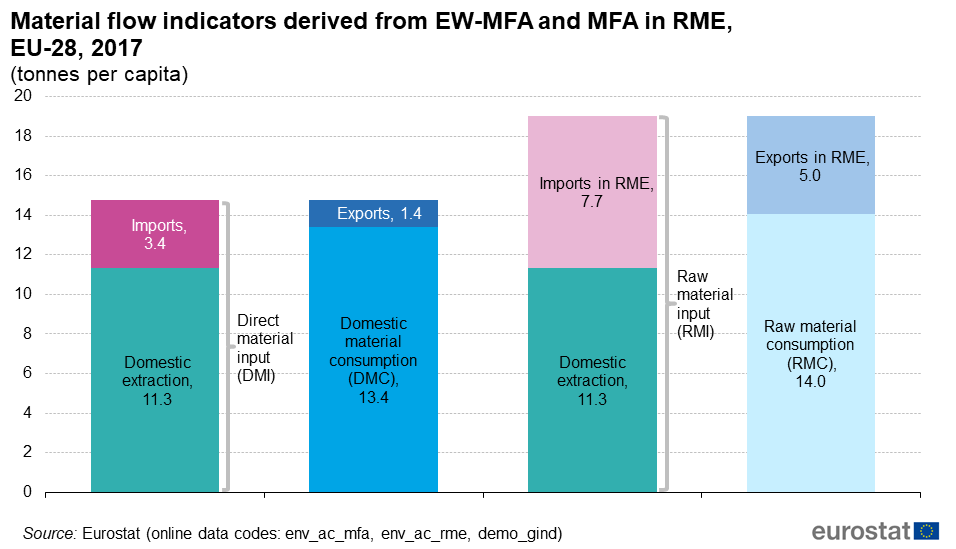 Direct material input (DMI) and raw material input (RMI) are auxiliary indicators that represent the amount of materials that are available to an economy. DMI represents the weight of the material as it enters the economy, either from the environment or because it crosses the EU's borders. RMI represents all the material that is directly and indirectly extracted to supply all inputs required for EU production. In 2017, at 19.0 tonnes of RME per capita, RMI in the EU was 28.7 % higher than DMI.

The EU's material footprint by material category over time 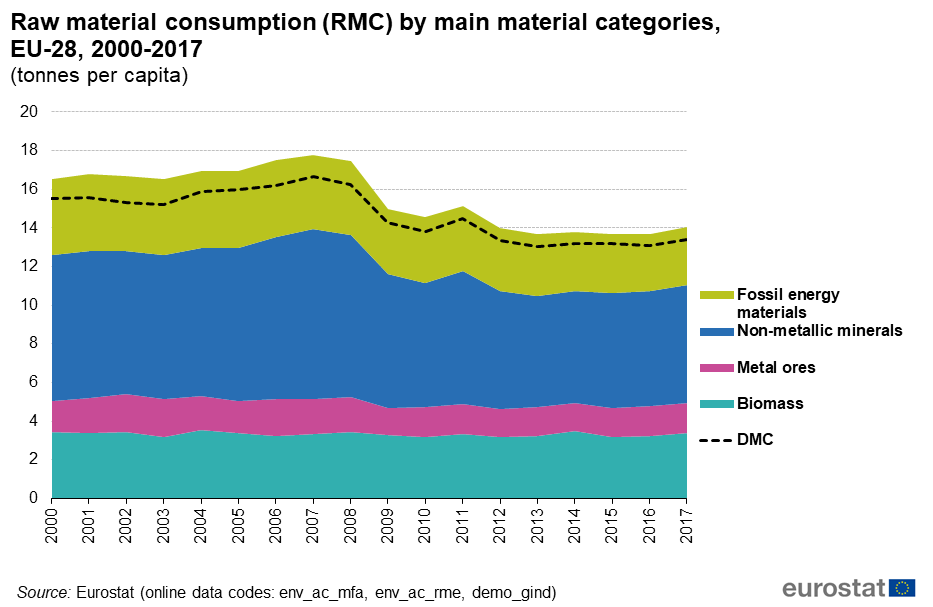 Raw material consumption by final use of products

The indicator RMC gives insight into the quantity and type of materials required to meet the EU-28's demand for products. It can be further broken down by product and by type of final use to analyse which specific products and final uses drive material extraction. The term 'final use' indicates that intermediate consumption is excluded. 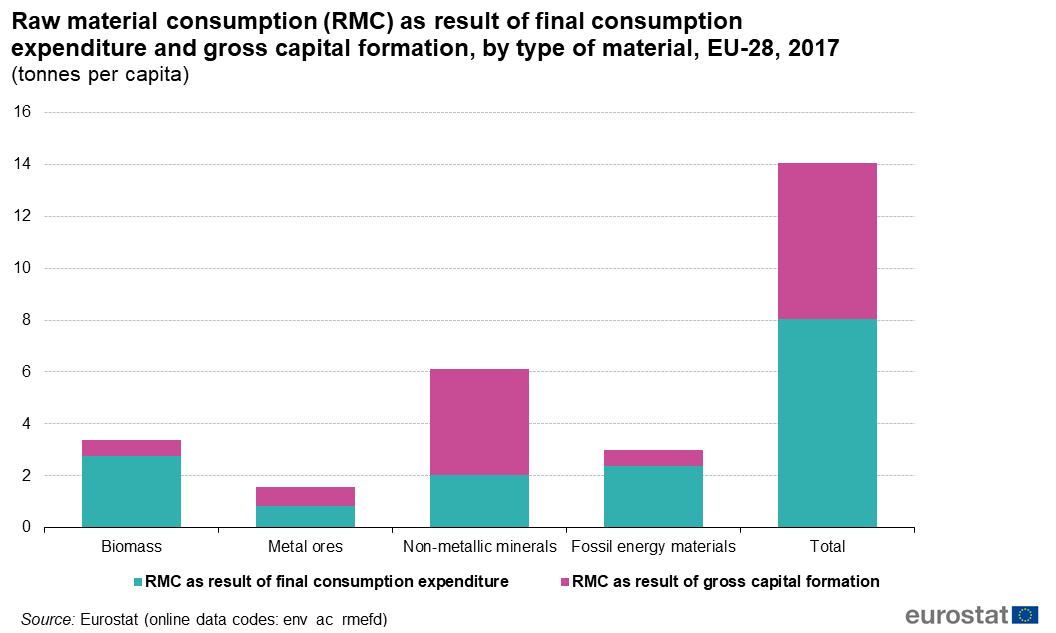 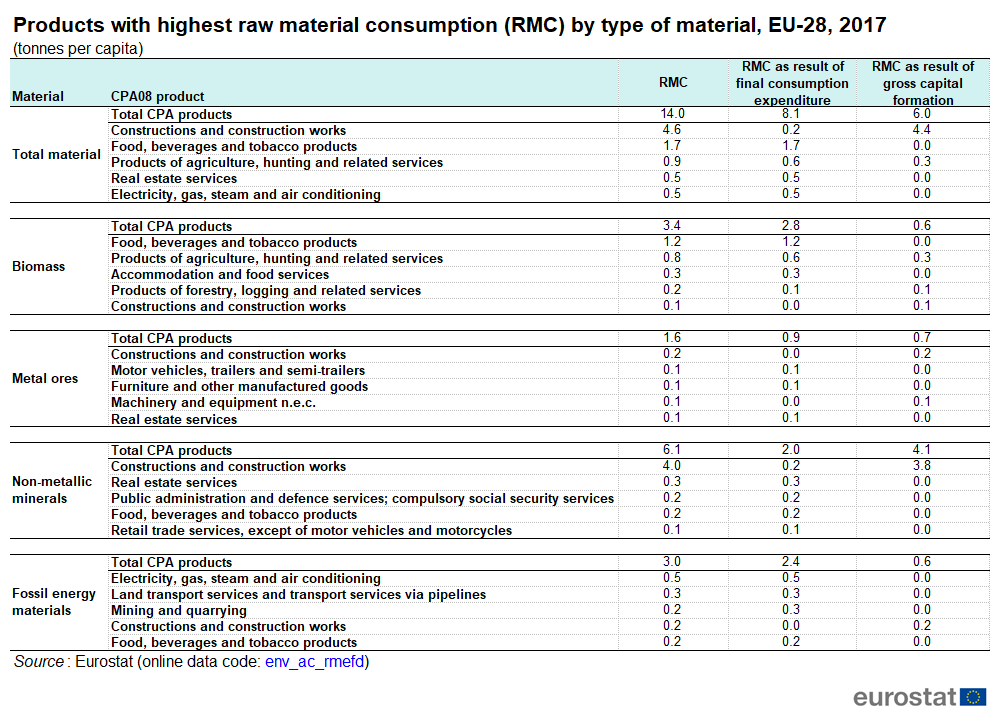 The RME-based material flow indicators are derived from data on domestic extraction of materials and trade flows in RME. Domestic extraction is recorded in the economy-wide material flow accounts (EW-MFA) and represents the physical amount of materials extracted from the environment by a national economy. Eurostat collects EW-MFA from the national statistical institutes (NSI) of the EU Member States, Norway, Switzerland and the candidate countries under Regulation (EU) No 691/2011 on European environmental-economic accounts. For more details on the material flow accounts data collection, see the reference metadata of the EW-MFA.

Trade flows in RME are estimated by Eurostat for the aggregated EU economy based on an environmentally-extended hybrid input-output model for the aggregated EU economy (for more details see the documentation of the EU RME model). Trade flows in RME and the RME-based material flow indicators (such as RMC and RMI) are not covered by Regulation (EU) 691/2011.

The compatibility of the SEEA with the System of National Accounts (SNA) which encompasses input-output tables provides a direct link between the data on domestic extraction taken from the EW-MFA and the input-output tables. However, the modelling that is required for estimating trade flows in RME results in more uncertain indicator estimates than for the indicators based on EW-MFA, which are compiled from foreign trade statistics for as far as trade is concerned.

Environmental accounts enable the assessment of the interplay between the economy and the environment, which in turn provides relevant information to see whether current production and consumption activities are sustainable. Measuring sustainable development is complex because it has to incorporate economic, social and environmental indicators. The data obtained may feed into political decision-making, underpinning policies for continued economic growth and sustainable development. An example of such a policy is the resource-efficient Europe flagship initiative, which is part of the Europe 2020 Strategy for a smart, inclusive and sustainable economy and which supports the shift towards sustainable growth in a resource-efficient, low-carbon economy.

The raw material consumption (RMC) indicator presented above is an alternative to the currently used domestic material consumption (DMC) indicator. In the future, when the estimates are of sufficient quality and available for all Member States, RMC may replace DMC to monitor progress towards Sustainable Development Goal 8 - 'Decent work and economic growth' and 12 - 'Responsible consumption and production'. As a first step towards this objective, Eurostat has published a country RME tool (see the section 'Material flows and resource productivity' on the Environment - Methodology page) to enable National Statistical Institutes to take this work forward. The most basic methodology to convert country trade flows of materials into trade flows in RME is to use aggregate EU RME coefficients and apply these to country trade flows. This coefficient approach, in an extended form, is implemented in the tool and is also applied by others for example in the final report Study on modelling of the economic and environmental impacts of raw material consumption for the European Commission.