Since 2000, the resource productivity of the EU economy increased by almost 40%.

Development of resource productivity in comparison with GDP and DMC, EU-27, 2000-2018

This article presents statistics concerning the European Union’s (EU’s) resource productivity as well as information on the extraction of natural resources consumed by the EU economy. The article is based on domestic material consumption and its components, as defined in material flow accounts. Eurostat’s material flow accounts are a comprehensive data framework that systematically records the inputs of materials to European economies.

To complement this overview article, there are articles to highlight the following specific topics from material flow accounts: resource productivity statistics and physical imports and exports. In addition, the article on material footprints presents material use from a consumption viewpoint.

Resource productivity quantifies the relation between economic activity and the consumption of natural resources, and sheds light on whether they go hand-in-hand or the extent to which they are decoupled (see definitions in the section on data sources and availability). Natural resources include biomass, metal ores, non-metallic minerals and fossil energy materials. Resource productivity is the lead indicator of the ‘resource efficiency scoreboard’.

The resource productivity components are gross domestic product (GDP) and domestic material consumption (DMC). The latter measures the total amount of materials directly consumed in an economy by businesses for economic production and by households.

An analysis of the resource productivity components, namely GDP and DMC, helps to explain these developments. Before 2008, GDP and DMC had been growing almost in parallel. Since then, the two components have been decoupling.

The material resources that enter an economy (domestic extraction and physical imports) may be directly used within the economy (domestic material consumption) or exported and used abroad. Correspondingly, DMC can be decomposed into domestic extraction and the physical trade balance (imports minus exports). Physical imports and exports indicate the international role of economies in terms of resource extraction.

Figure 2 shows the development between 2000 and 2018 in the extraction of materials within the EU economy (domestic extraction), as well as physical imports and exports and the resulting physical trade balance. Notably, imports and exports are measured in the weight of products crossing the border, regardless of how much the traded goods have been processed. 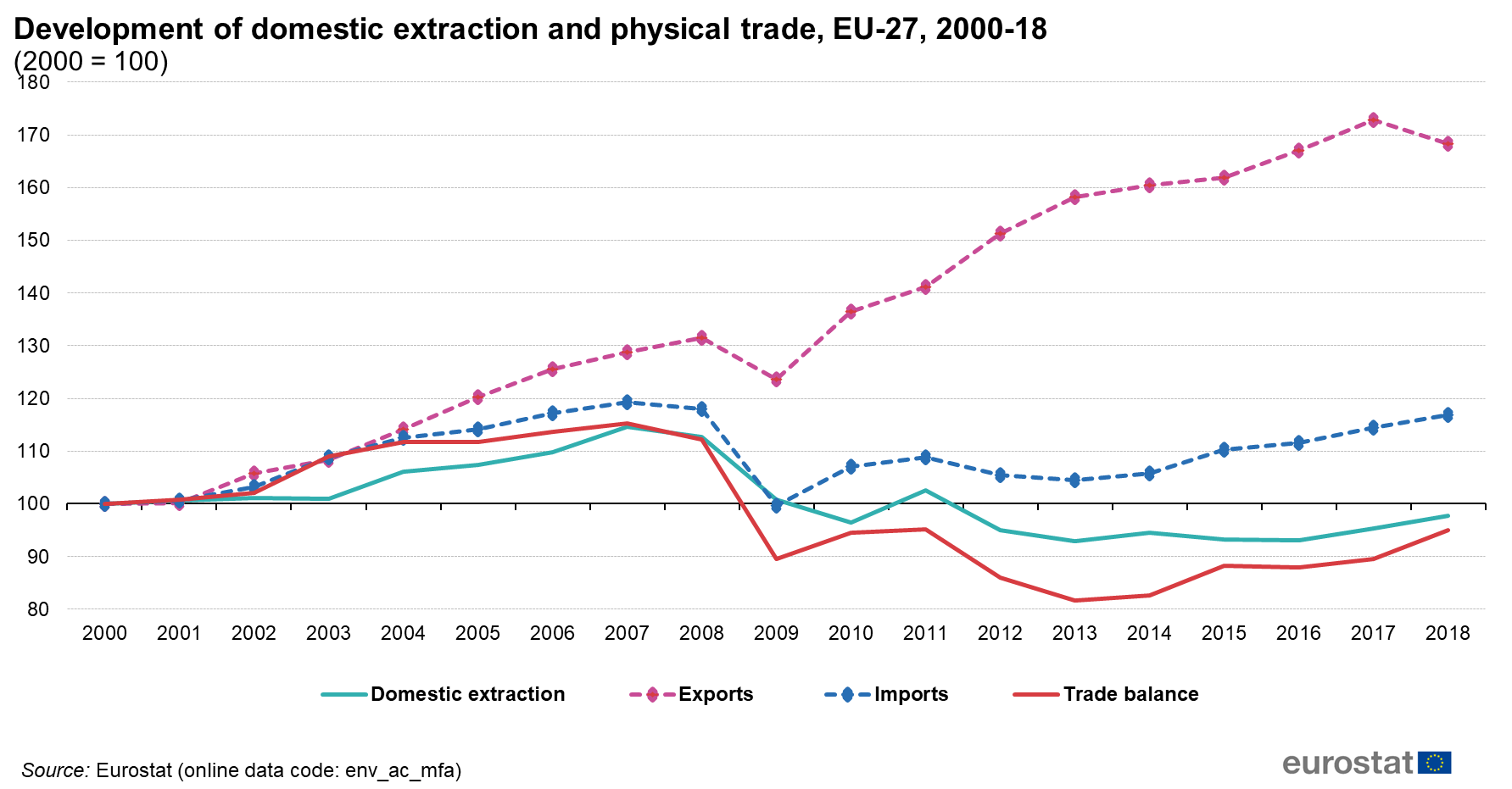 The EU’s physical exports — mainly semi-manufactured and finished products — increased almost every year throughout the period 2000–2018, overall a growth by about 68 %. Physical imports were coupled to domestic extraction and domestic consumption over the whole 2000–2018 period. After high levels were reached in 2007 and 2008, domestic extraction and imports simultaneously turned downwards, reflecting the impact of the financial and economic crisis. By 2018, physical imports had returned to their pre-crisis levels and domestic extraction was about 2 % lower than in 2000. These patterns indicate that the EU has moved towards a more export-oriented economy whilst being more and more involved in globalisation.

For more information, see the article on physical imports and exports.

An analysis of DMC by material category conveys the relative significance of various materials and their potential for reuse, recovery or recycling. Materials are classified in four main categories: biomass, metal ores, non-metallic minerals and fossil energy materials. The total DMC of the EU economy is estimated at 14 tonnes per capita in 2018. The EU’s DMC is dominated by non-metallic minerals (see Figure 3), making up nearly half of the total. Biomass and fossil energy materials each make up approximately a quarter of DMC. Metal ores constitute the smallest of the four main material categories. 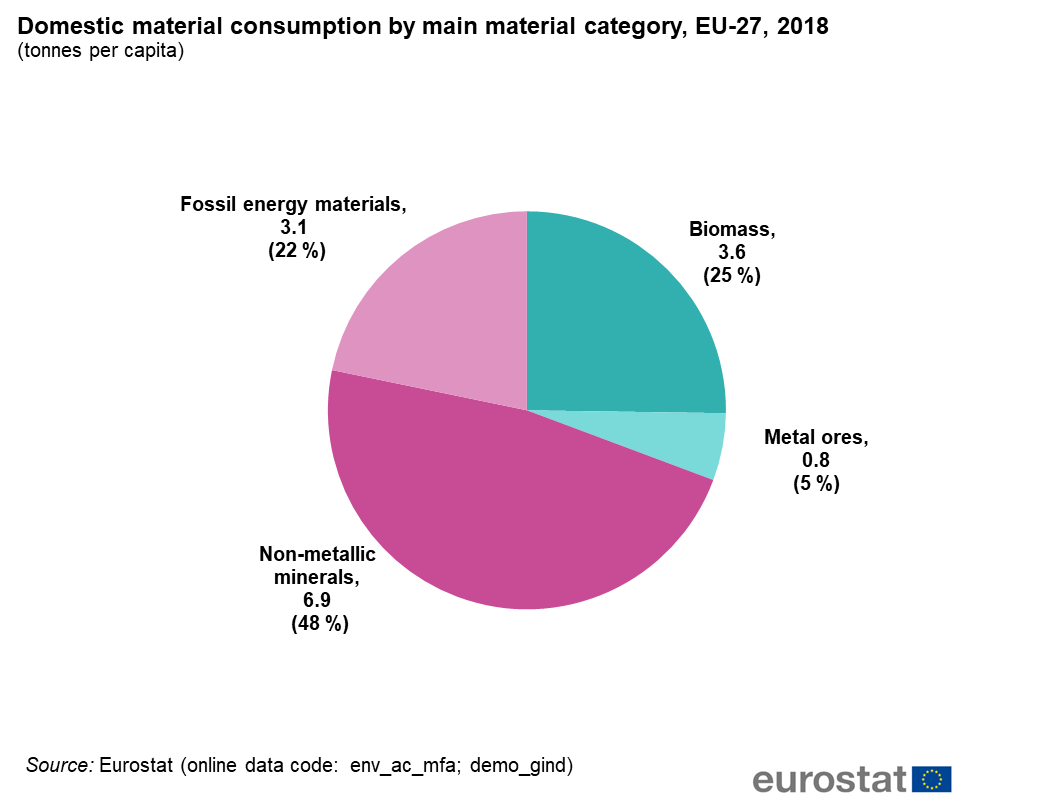 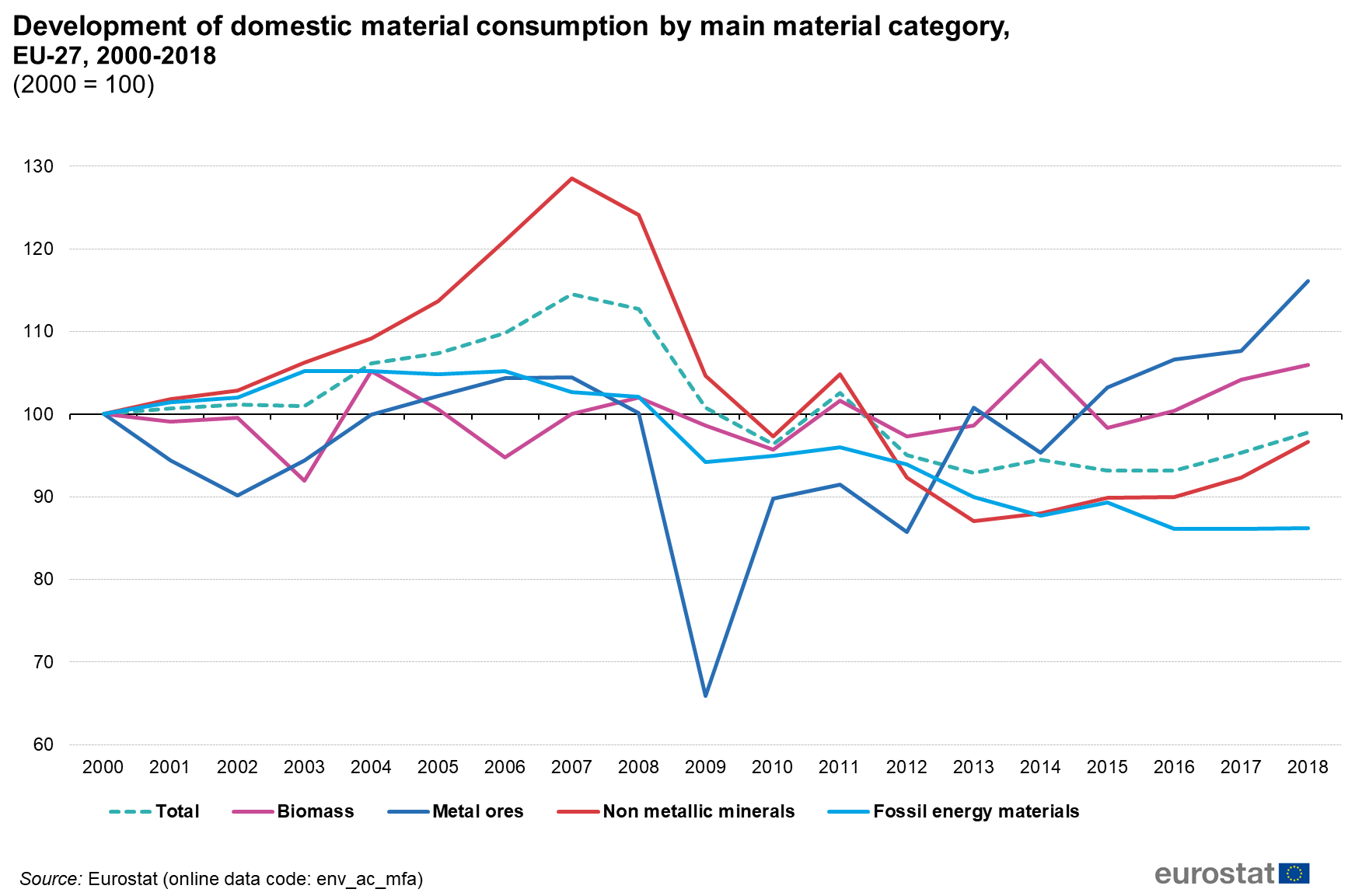 The level of DMC differs significantly across the EU-27, ranging from around 9 tonnes per capita (Italy, Spain, as well as the United Kingdom) to around 30 tonnes per capita (Finland, Estonia and the EFTA countries Iceland and Norway). Furthermore, the structure of DMC — by main material category — varies across countries, as can be seen from Figure 5. The composition of DMC in each country is influenced by natural endowments with material resources, and the latter may form an important structural element of each economy. 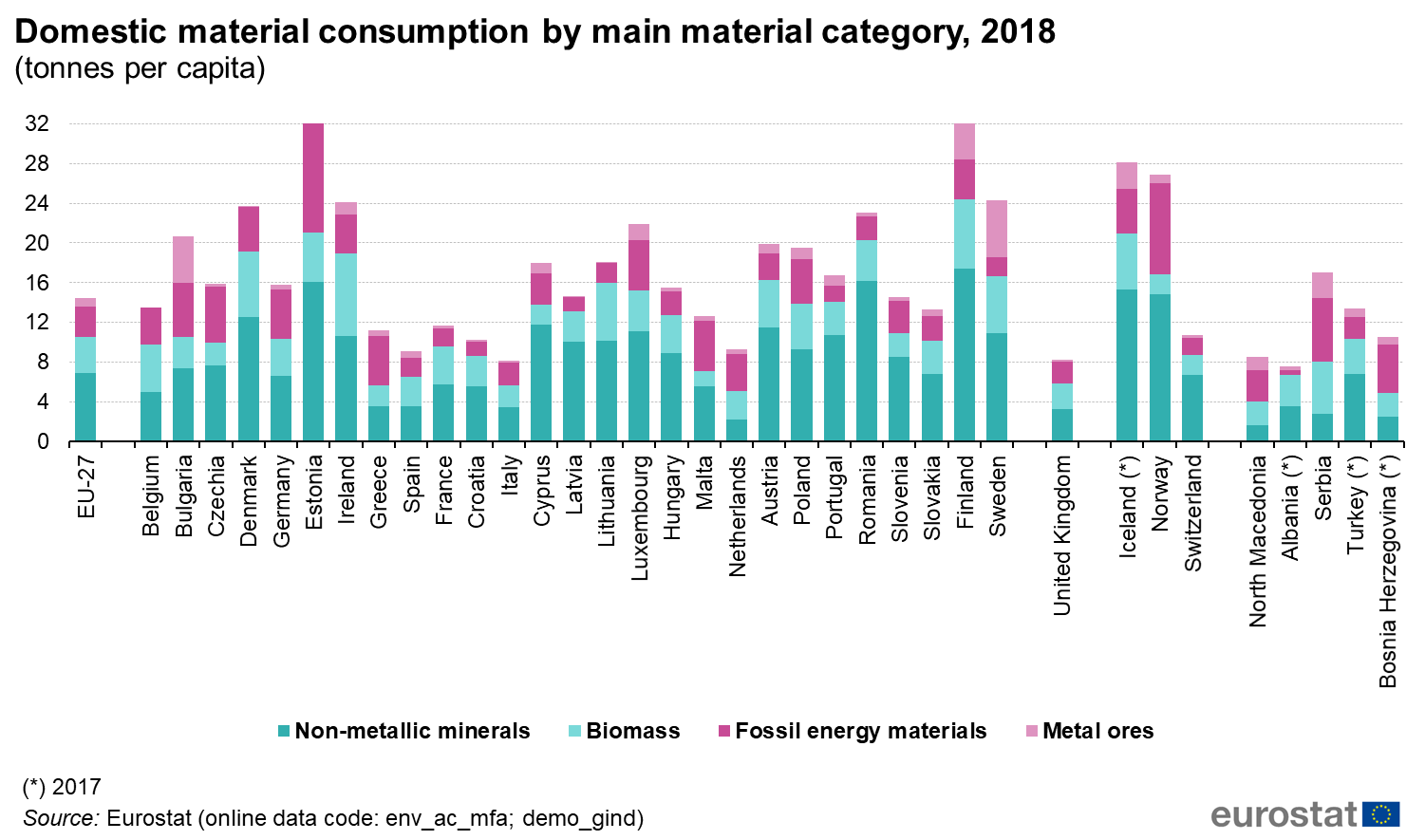 Consumption of fossil energy material is around 3 tonnes per capita for the EU and more even across countries. Countries below average rely on non-fossil energy carriers such as nuclear and biomass (e.g. France, Sweden, Latvia). Countries well above average are those with extraordinary fossil fuel extraction activities (e.g. Estonia, Norway). Consumption of metal ores is highest in extracting countries (Finland, Sweden and Bulgaria).

Besides the structure of the economy and climatic conditions, population density may explain — at least in part — differences between European countries in relation to consumption patterns. More densely populated Member States such as the Netherlands, Belgium, Italy and Malta tend to consume somewhat lower amounts per capita than the EU average whereas higher per capita consumption may be observed for low population density Member States like Finland, Estonia and Sweden.

Worldwide material extraction — which equals the world’s DMC as the global trade balance is zero — increased to slightly above 12 tonnes per capita in recent years. It has been steadily increasing since the year 2000 when it was at 8.8 tonnes per capita. 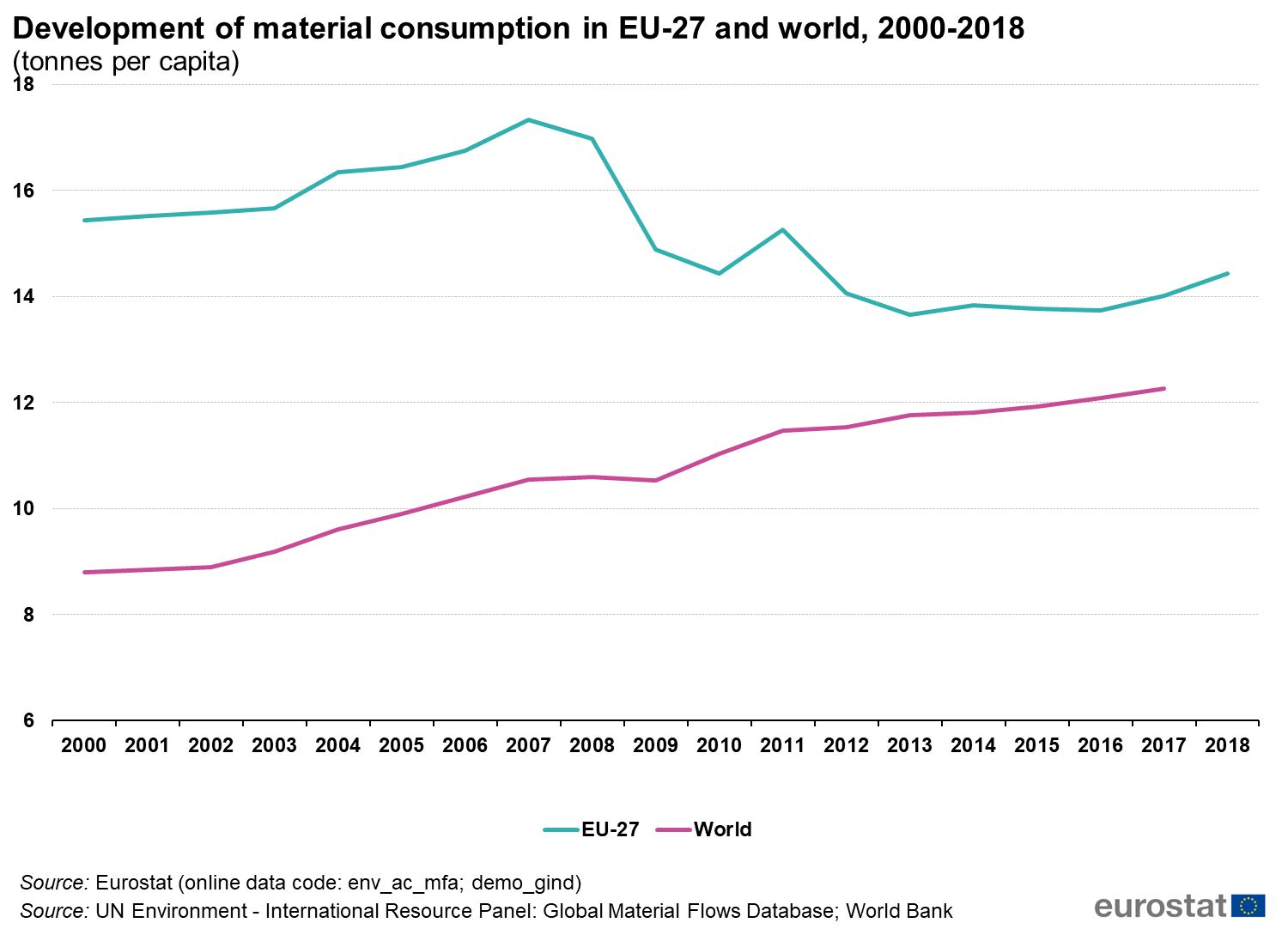 Economy-wide material flow accounts are based on materials extracted from the environment by national economies (domestic extraction) and by other economies (imports), changes of material stocks within the economy (net additions to stocks), and material outputs to other economies (exports) and/or to the environment (domestic processed output). These accounts are coherent with national accounts in particular concerning the residency of producer units. They cover all solid, gaseous and liquid materials, except for flows of air and water, which are treated as separate accounts.

DMC measures the total amount, in tonnes, of material directly used in an economy, either by businesses, government and other institutions for economic production or by households. DMC is measured in tonnes of extracted natural resources per year. DMC equals the domestic extractions of materials plus imports — called direct material input (DMI) — minus exports.

Depending on the purpose of the analysis, resource productivity may also be expressed in:

The term decoupling refers to breaking the link between an environmental and economic variable. As defined by the Organisation for Economic Co-operation and Development (OECD), decoupling occurs when the growth rate of an environmental pressure (for example, DMC) is less than that of its economic driving force (for example, GDP) over a given period. Decoupling can be either absolute or relative. Absolute decoupling is said to occur when the environmental variable is stable or decreases while the economic driving force grows. Decoupling is said to be relative when the rate of change of the environmental variable is less than the rate of change of the economic variable.

Natural resources underpin our economy and our quality of life and many scientists argue that continuing our current patterns of resource use is not an option if the planet is to survive. Increasing resource efficiency is one of the key elements to securing sustainable growth and jobs in the EU and has the potential to bring about economic opportunities, improve productivity, drive down costs and boost competitiveness.

A resource-efficient Europe is one of the flagship initiatives of the Europe 2020 strategy: it supports the shift towards a resource-efficient, low-carbon economy to achieve sustainable growth. It provides a long-term framework for actions in many policy areas, supporting policy agendas for climate change, energy, transport, industry, raw materials, agriculture, fisheries, biodiversity and regional development. It aims to increase certainty for investment and innovation and to ensure that all relevant policies take account of resource efficiency in a balanced manner. Resource efficiency is the lead indicator of this flagship initiative. Resource efficiency and DMC are indicators derived from economy-wide material flow accounts: Regulation (EU) No 691/2011 on European environmental economic accounts provides a framework for the development of various types of environmental accounts.