Highlights
Tweet
Life expectancy at birth in the EU estimated at 81 years in 2018.
Tweet
Infant mortality rate in the EU down by almost 20 % over the last 10 years.

This article provides information relating to mortality in the European Union (EU).

Life expectancy at birth rose rapidly during the last century due to a number of factors, including reductions in infant mortality, rising living standards, improved lifestyles and better education, as well as advances in healthcare and medicine. 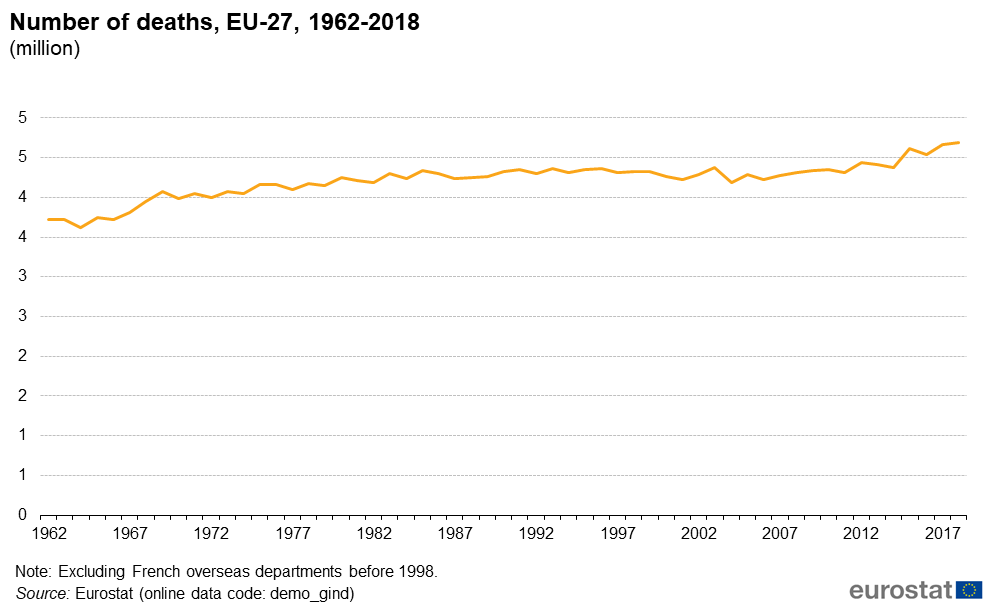 The most commonly used indicator for analysing mortality is life expectancy at birth: the mean number of years that a person can expect to live at birth if subjected to current mortality conditions throughout the rest of their life. It is a simple but powerful way of illustrating the developments in mortality. 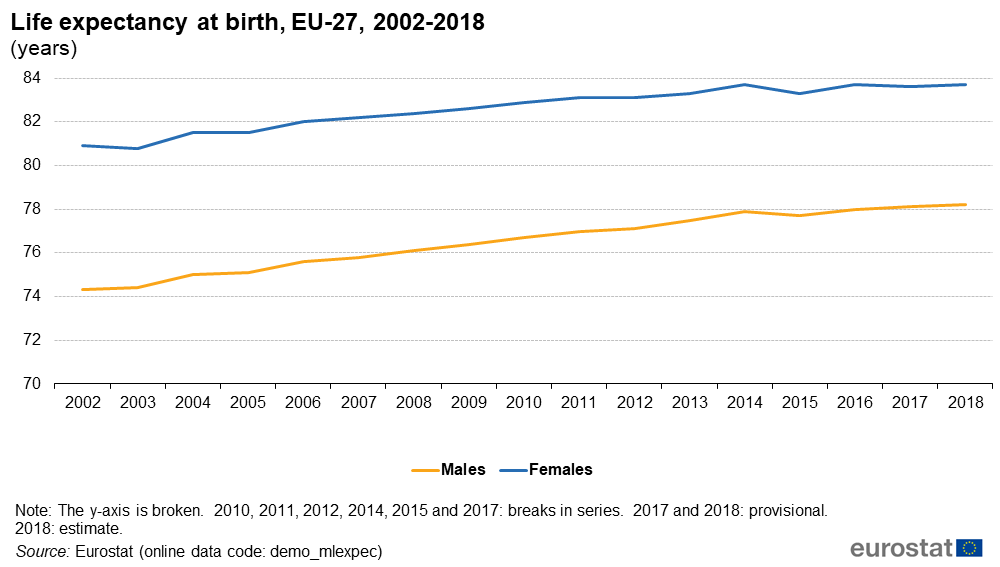 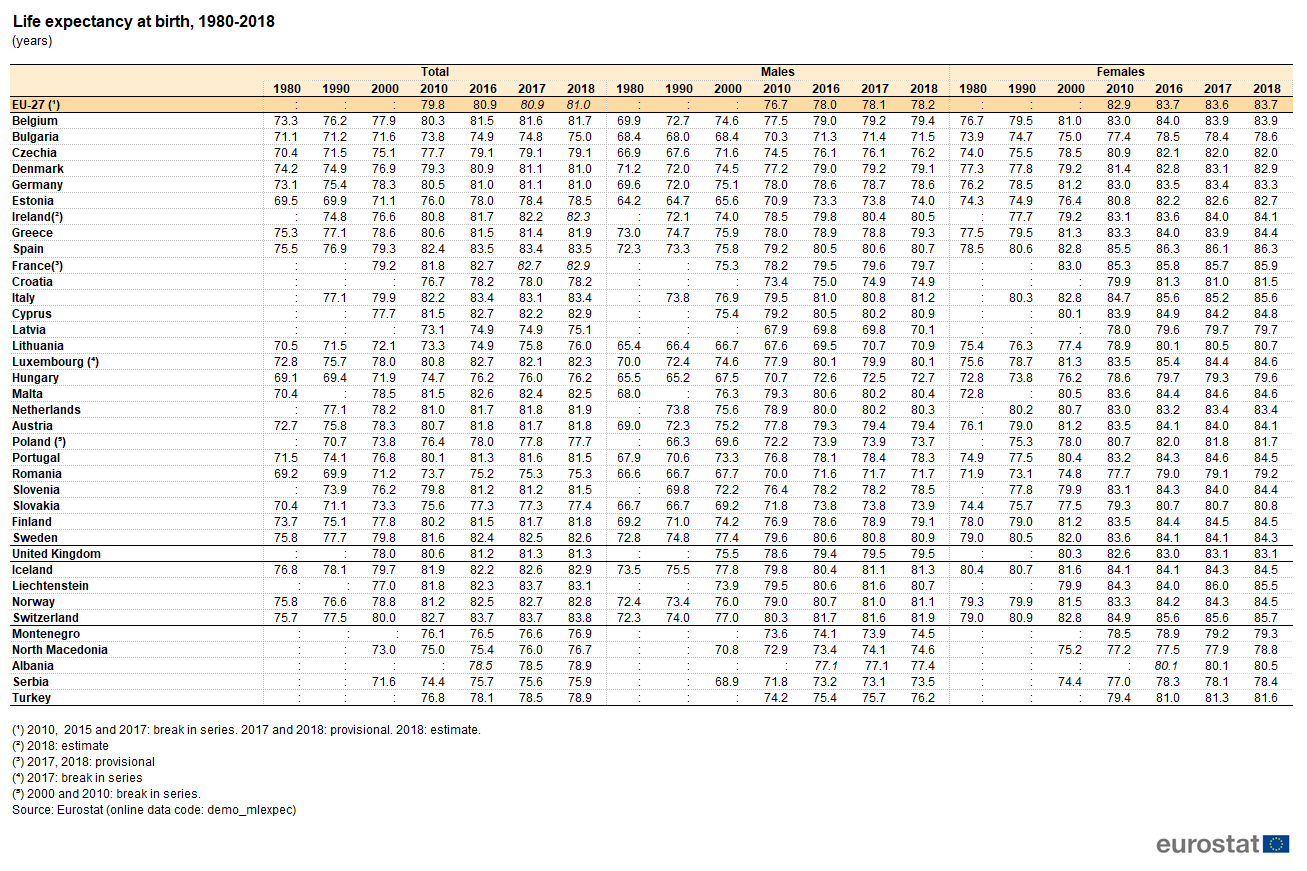 There are still major differences between countries when looking at men and women life expectancies (see Table 1). In 2018, the differences between the highest and lowest life expectancies among EU Member States amounted to 11.1 years for men and 7.7 years for women. For men, the lowest life expectancy was recorded in Latvia (70.1 years) and the highest in Italy (81.2 years). For women, the range was from a low of 78.6 years in Bulgaria to a high of 86.3 years in Spain.

In 2018, the life expectancy for women is still higher than the life expectancy for men. With a gender gap of 5.5 years of life in 2018, newly born females in the EU-27 should generally expect to outlive men. Furthermore, this gap varied substantially between EU Member States. In 2018, the largest difference between the sexes was found in Lithuania (9.8 years) and the smallest in the Netherlands (3.1 years) — see Figure 3. 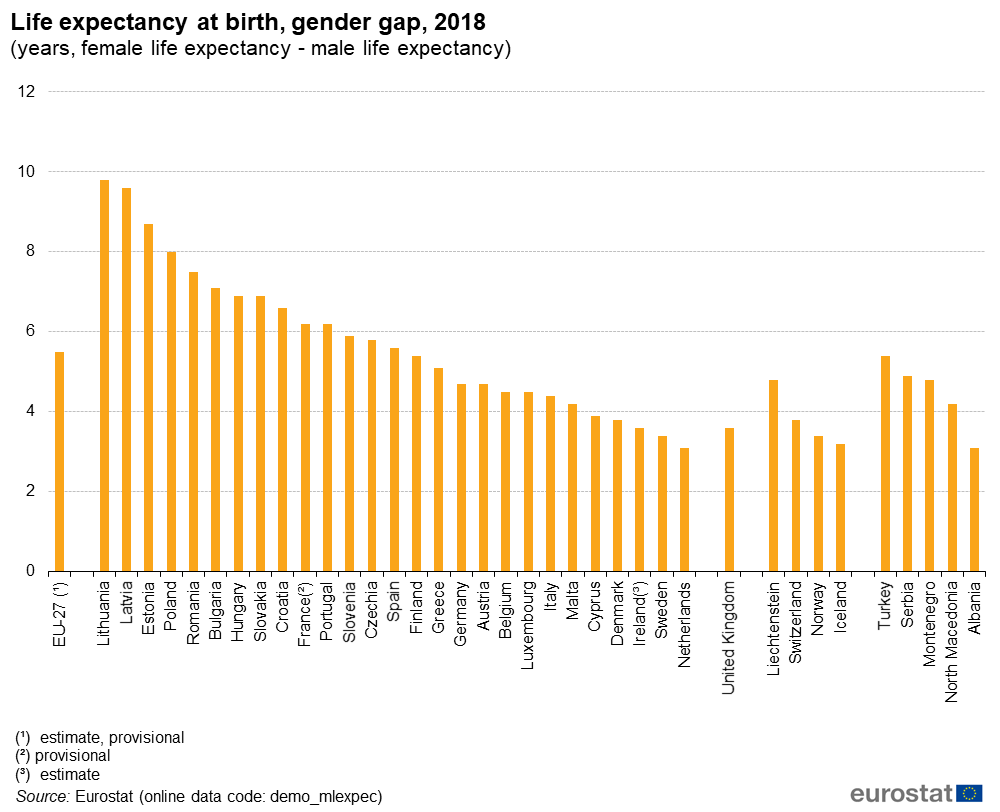 Life expectancy increased in all the candidate countries in 2018 as compared with 2017, with the highest increase in North Macedonia (0.7 years higher) and the lowest in both Serbia and Montenegro (0.3 years higher). Among the candidate countries, between 2010 and 2018, the highest gain in life expectancy was observed in Turkey, by of 2.0 years for men and by 2.2 years for women, and the lowest gain in Montenegro, by 0.9 years for men and 0.8 years for women.

In 2018, EFTA and candidate countries recorded smaller differences between the highest and lowest life expectancies than in the EU-27. For EFTA countries these difference was 1.2 years for both men (ranging from a low of 80.7 in Liechtenstein and a high of 81.9 in Switzerland) and for women (from 84.5 in both Norway and Iceland to 85.7 in Switzerland). Within the candidate countries the difference between the highest and lowest life expectancies amounted to 3.9 years for men (from 73.5 in Serbia to 77.4 in Albania) and to 3.2 years for women (from 78.4 in Serbia to 81.6 in Turkey).

The EFTA countries recorded differences below the EU average between life expectancy at birth for men and women, ranging from 4.8 years in Lichtenstein to 3.2 in Iceland. The same behaviour can be observed in the candidate countries, where the differences between life expectancy at births for men and women ranged between 5.4 years in Turkey and 3.1 in Albania.

Slight increase in life expectancy at age 65 in 2018 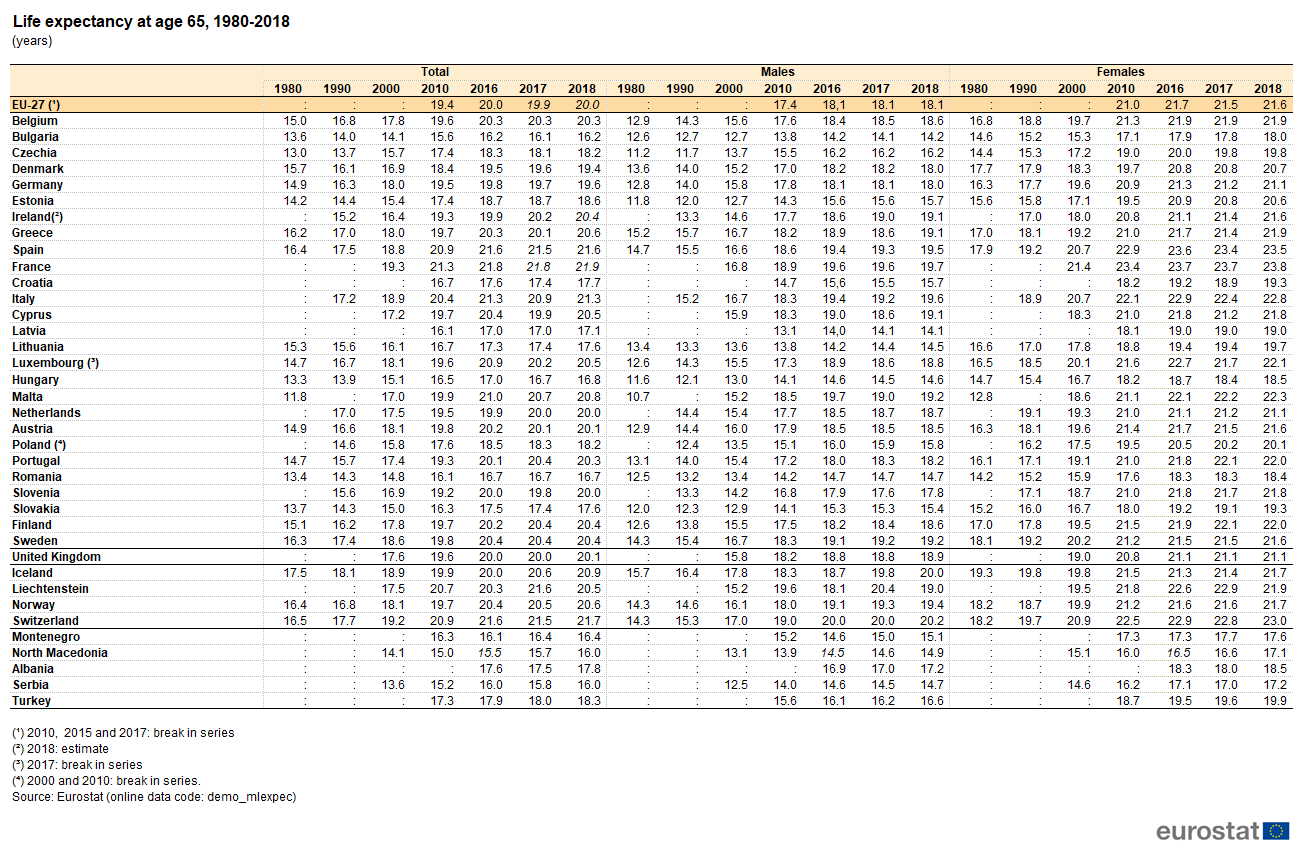 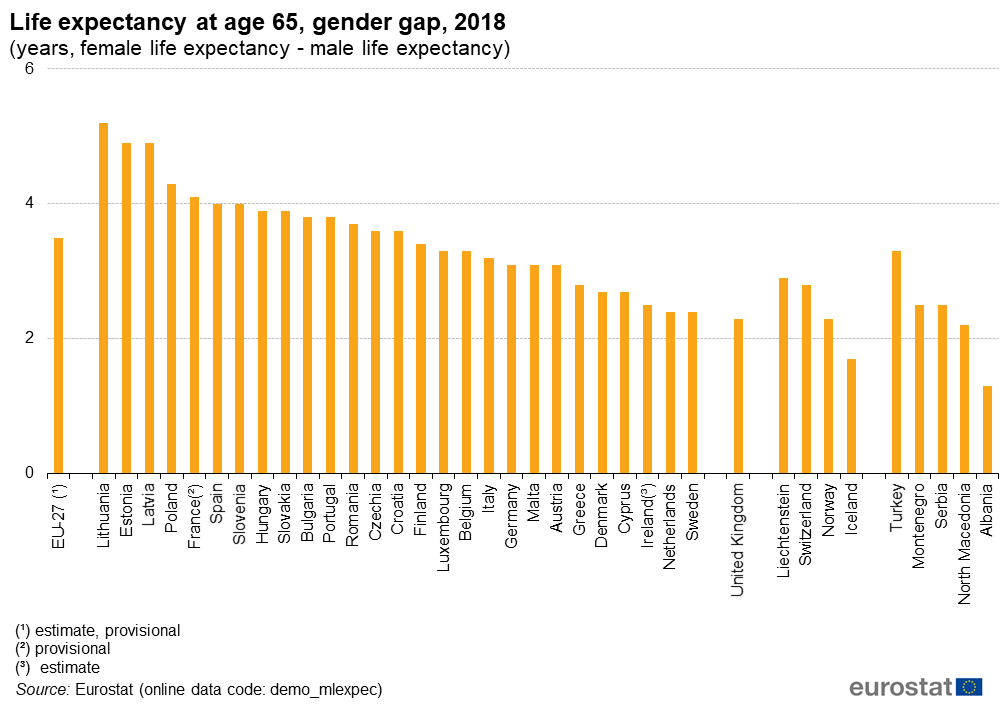 When looking at life expectancy at age 65 it can be observed that the gap between the sexes is smaller than the gap at birth. In 2018 women aged 65 in the EU-27 should generally expect to outlive men by 3.5 years. The largest difference between the sexes was found in Lithuania (5.2 years) and the smallest in both Sweden and the Netherlands (2.4 years) — see Figure 4 .

Figure 4 shows that in 2018 women aged 65 in the EFTA countries expected to outlive men from a minimum of 1.7 years in Iceland to a maximum of 2.9 years in Liechtenstein. Within the candidate countries the highest gap in life expectancy at age 65 between sexes was registered in Turkey (3.3 years) and the lowest was in Albania (1.3 years). 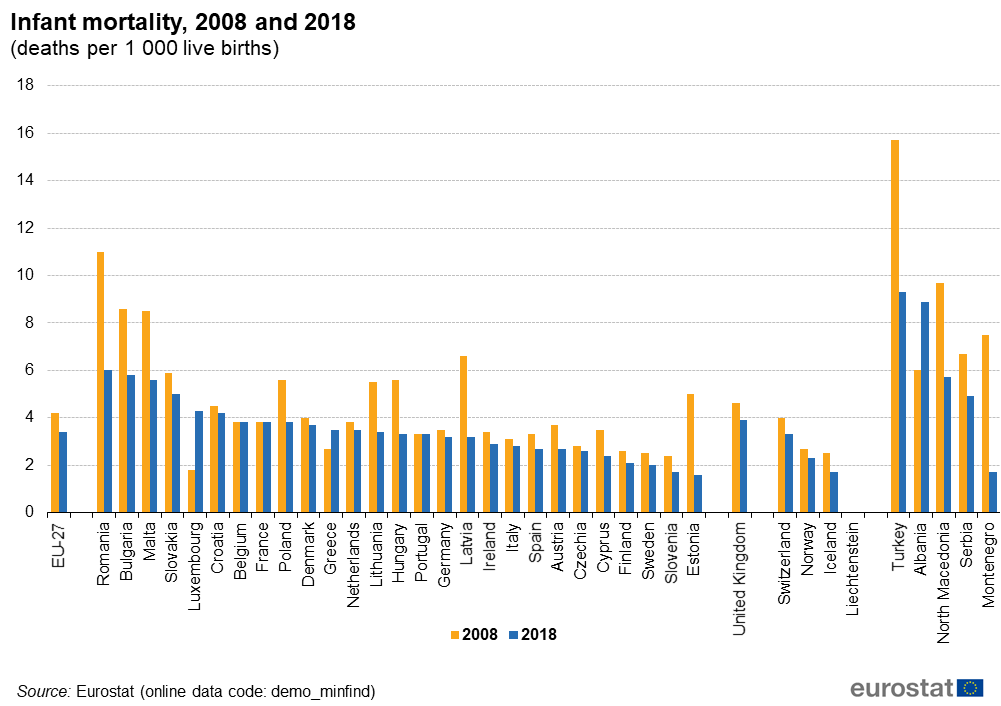 Eurostat provides information on a wide range of demographic data, including statistics on the number of deaths by sex, by age, by year of birth, as well as according to citizenship, country of birth and educational attainment; statistics are also collected for infant mortality and late foetal deaths. A series of mortality indicators are produced, which may be used to derive a range of information on subjects such as crude death rates or life expectancy measures by age, sex or educational attainment.

The gradual increase in life expectancy in the EU is one of the contributing factors to the ageing of the EU-27’s population — alongside relatively low levels of fertility that have persisted for decades (see the articles on population structure and ageing and fertility statistics).