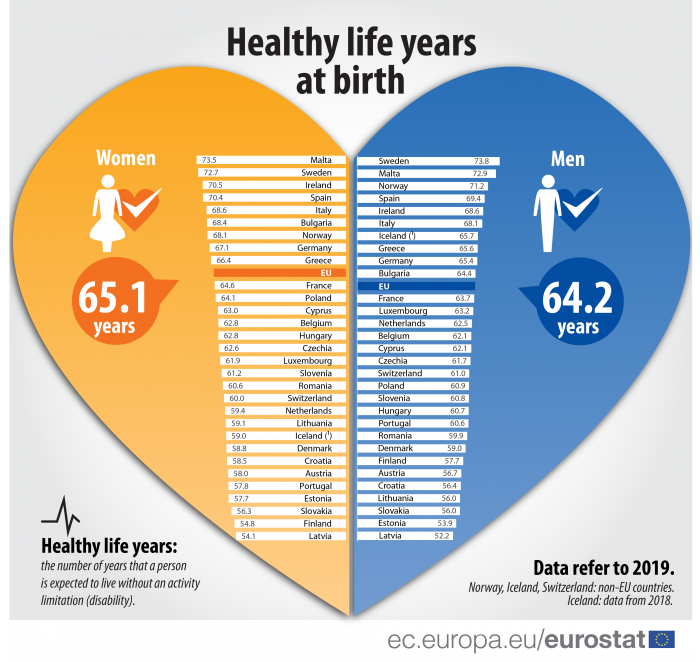 Whether extra years of life gained through increased longevity are spent in good or bad health is a crucial question. Since life expectancy at birth is not able to fully answer this question, indicators of health expectancies, such as healthy life years (also called disability-free life expectancy) have been developed. These focus on the quality of life spent in a healthy state, rather than the quantity of life, as measured by life expectancy. Healthy life years are an important measure of the relative health of populations in the European Union (EU).

Life expectancy for women in the EU was, on average, 5.5 years longer than that for men in 2019. However, most of these additional years tend to be lived with activity limitations. Indeed, at just 0.9 years difference in favour of women, the gender gap was considerably smaller in terms of healthy life years than it was for overall life expectancy. Men, therefore, tend to spend a greater proportion of their somewhat shorter lives free from activity limitations.

Across the EU Member States, life expectancy at birth for women in 2019 ranged between 78.8 years in Bulgaria to 86.7 years in Spain; a difference of 7.9 years. A similar comparison for men shows that the lowest level of life expectancy in 2019 was recorded in Latvia 70.9 years and the highest in Sweden 81.5 years; a range of 10.6 years. 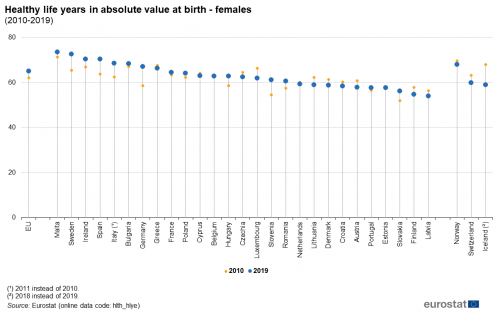 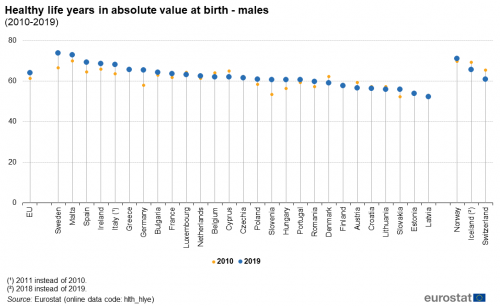 The corresponding range for healthy life years at birth: 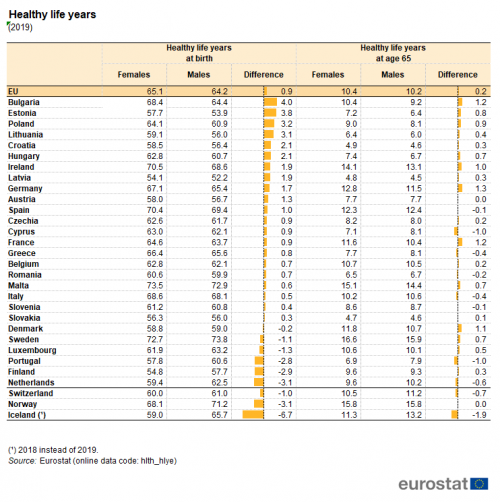 The expected number of healthy life years at birth was higher for women than for men in 21 of the Member States, with the difference between the sexes generally relatively small, as there were only four Member States where the gap rose to more than 3.0 years in favour of women — Lithuania, Poland, Estonia, and Bulgaria (see the Table 1).


As such, it is clear that there are considerably wider differences between EU Member States in terms of the quality of life (health wise) that their respective populations may expect to live, when compared with the overall differences in life expectancy. In 2019, a woman born in Finland could expect to live 64.7 % of her life free from any limitation, a share that rose to 86.8 % in Bulgaria and 86.9 % in Malta. In 2019, a man born in Estonia, Austria and Finland could expect to live between 71.1% - 72.8 % of their lives free from any activity limitation, whereas the share rose to as high as 89.9 % in Bulgaria and 90.6 % in Sweden.

By contrast, men could expect to live 0.6 years longer free from disability than women in the Netherlands, and 1.0 years longer in both Portugal and Cyprus. 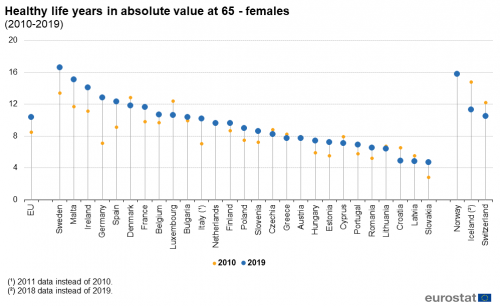 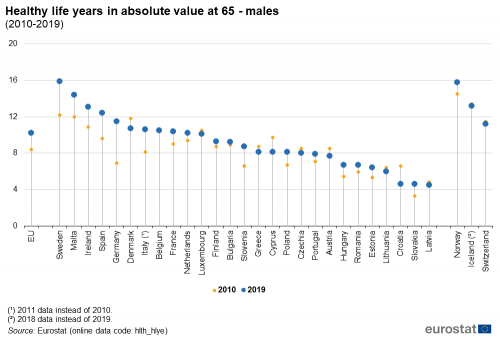 Eurostat calculates information relating to healthy life years for three ages: at birth, at age 50 and at age 65. It is calculated using mortality statistics and data on self-perceived long-standing activity limitations. Mortality data come from Eurostat’s demographic database, while self-perceived long-standing activity limitations data come from a European health module that is integrated within the data collection EU statistics on income and living conditions (EU-SILC).

EU-SILC is documented in more detail in this background article which provides information on the scope of the data, its legal basis, the methodology employed for health-related variables, as well as related concepts and definitions.

The general coverage of EU-SILC is all private households and their members (who are residents at the time of data collection); this therefore excludes people living in collective households.

The relevant EU-SILC question concerning the long-standing activity limitation is: ‘For at least the past six months, to what extent have you been limited because of a health problem in activities people usually do? Would you say you have been:

Limitations of the data

The indicator presented in this article is derived from self-reported data so it is, to a certain extent, affected by respondents’ subjective perception as well as by their social and cultural background.

EU-SILC does not cover the institutionalised population, for example, people living in health and social care institutions who are more likely to face limitations than the population living in private households. It is therefore likely that, to some degree, this data source under-estimates the share of the population facing activity limitations. Furthermore, the implementation of EU-SILC was organised nationally, which may impact on the results presented, for example, due to differences in the formulation of questions or changing the related questions in a specific year.

A sizeable break in the series is found in Sweden (2014) and Germany (2015); this impacts, to some degree, on the results presented for the EU aggregate too.

The health status of a population is difficult to measure because it is hard to define among individuals, populations, cultures, or even across time periods. As a result, the demographic measure of life expectancy has often been used as a proxy for the state of a nation’s health, partly because it is based on a characteristic that is simple and easy to understand — namely, that of death. Indeed, life expectancy at birth remains one of the most frequently quoted indicators of health status and economic development and it has risen rapidly in the last century due to a range of factors, including: reductions in infant mortality, rising living standards, improved lifestyles, better education, as well as advances in healthcare and medicine.

While most people are aware that successive generations are living longer, less is known about the health of the EU’s ageing population. Indicators on healthy life years introduce the concept of the quality of life, by focusing on those years that may be enjoyed by individuals free from the limitations of illness or disability. Chronic disease, frailty, mental disorders and physical disability tend to become more prevalent in older age, and may result in a lower quality of life for those who suffer from such conditions, while the burden of these conditions may also impact on healthcare and pension provisions.

Healthy life years also monitor health as a productive or economic factor. An increase in healthy life years is one of the main goals of the EU’s health policy, given that this would not only improve the situation of individuals (as good health and a long life are fundamental objectives of human activity) but would also lead to lower public healthcare expenditure and likely increase the possibility that people continue to work later into life. If healthy life years increase more rapidly than life expectancy, then not only are people living longer, but they are also living a greater proportion of their lives free from health problems.

In November 2010, the European Commission adopted a European disability strategy for the period 2010-2020. For people with disabilities, this aims to improve their social inclusion, their well-being and enable them to fully exercise their rights. The strategy is based on the United Nations Convention on the Rights of Persons with Disabilities. More information is available in an article on functional and activity limitations.

The European innovation partnership on active and healthy ageing is a pilot scheme that aims — by 2020 — to increase the average healthy lifespan of EU citizens by two years, through: improving health and quality of life; ensuring health and social care systems are sustainable and efficient; and creating growth and market opportunities for business. This partnership involves cooperation between the European Commission, EU Member States, regions, industry, health and social care professionals and organisations representing older people and patients. It aims to improve older people’s lives, helping them to contribute to society, and reduce pressure on health and care systems — ultimately contributing to sustainable growth.

In February 2012, the European Commission adopted a Communication titled Taking forward the strategic implementation plan of the European innovation partnership on active and healthy ageing (COM(2012) 83 final) which is designed to accelerate the pace of innovation in relation to healthy and active ageing.

Link to the Health, main tables:

Link to the Health data base: