Preliminary data from 31 European countries show that there were over half a million additional deaths from January to November 2020, against the average number of deaths during the same period between 2016 and 2019.

This article provides information regarding the evolution of the number of deaths by week in the Member States of the European Union (whenever available), as well as the EFTA countries and the United Kingdom. This is particularly useful for assessing the direct and indirect effects of the COVID-19 pandemic on the European population (see Data sources section on country coverage).

The number of deaths rose rapidly in some Member States at the beginning of March 2020. In some parts of Europe, the difference compared with previous years was exceptionally high. On the other hand, some areas were less severely affected. In total, among the European countries for which data are available, in 2020 there were 510 000 more deaths during weeks 1 to 49 (January to December) than the average number during the same period over the four years 2016 to 2019. In the most exposed period of the first wave, from mid-March to mid-May 2020, i.e. weeks 12 to 20, there were more than 225 000 additional deaths, while during a second increase between October and December (weeks 41 to 49) more than 250 000 additional deaths were registered. While in the first wave some countries and regions were severely hit and others were less affected, the second wave affected a larger territory overall with increases less focused on certain areas.

The comparison of the number of deaths in 2020 with data from previous years (average over 2016 to 2019) shows, at aggregate level, the exceptionality of the first months of 2020 across the European countries for which data are available. While important disparities existed between countries and regions, the first weeks of the year show lower values than those observed in the previous years. However, while mortality normally starts declining at the beginning of March, in 2020 the number of deaths starts to rise abruptly. After week 11 (9-15 March 2020), the values of 2020 exceed those recorded on average in the previous years. This gap is at its height in week 14 (30 March to 5 April). In the following weeks, a decrease can be observed, likely due to the effect of the different restriction measures put in place in the countries. Values for the summer period of 2020 show that the number of deaths start to increase again compared to the average of the previous period between week 30 (20-26 July) and week 33 (10-16 August), and there is again a robust upwards trend starting from week 36 (31 August-6 September) until week 49 (beginning of December). Provisional data until the end of the year clearly outline that the second wave is even larger than the first one. 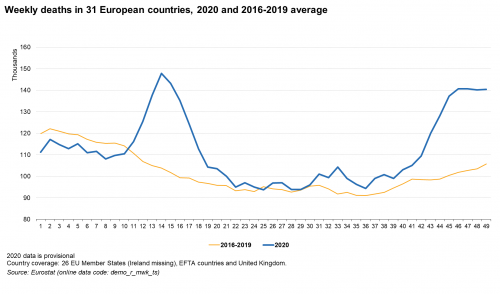 Each year displays its specific mortality pattern, which is also different from region to region. Aggregated 2018 data, for example, show the toll taken by the flu epidemics in late February and early March of that year. At the same time, previous years showed a striking similarity in the decreasing trend between March and the end of May (week 22), as shown in Figure 2. 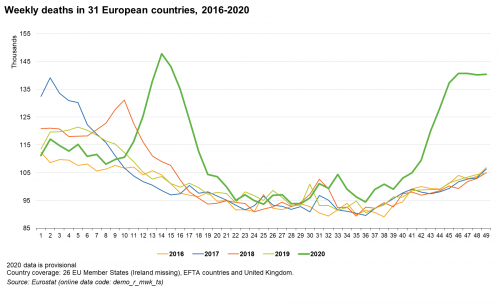 Number of deaths higher than in previous years 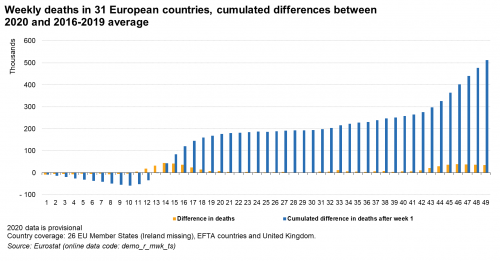 The European countries analysed are not affected in the same way, nor at the same time, by the rise in the number of deaths. In March (week 10), Italy has already significantly more deaths than in the previous years. It is the first country to reach a peak: 186 % in week 13 (23-29 March). The sharpest increase in the number of deaths is in Spain: over 250 % in week 14 (30 March-5 April). For other countries, like Belgium, Luxembourg, the Netherlands and Sweden, the peak is reached in week 15 (6-12 April). Countries in the central and eastern part of Europe experience a strong increase in their mortality during the autumn months.

In the second half of the year, after week 26 and even more pronouncedly from the beginning of August (week 32), the trend starts to rise again in most countries but with different patterns. Table 1 below compares the weekly deaths in the second half 2020 with the average of the previous four years. (The complete table is available 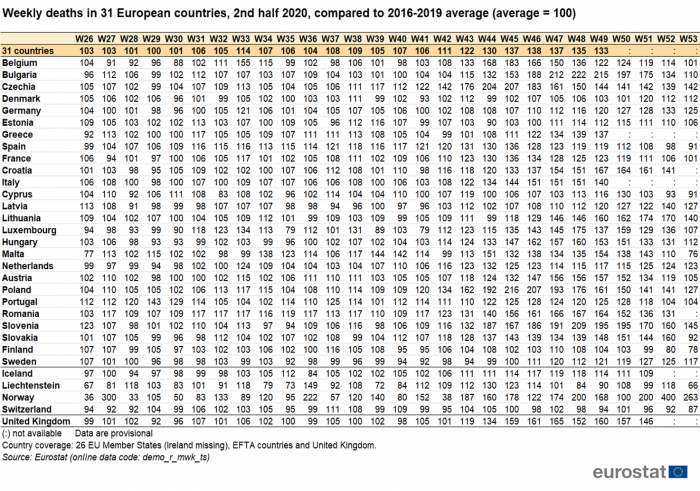 A new sharp increase in additional deaths can be highlighted for several countries (notably Belgium, Bulgaria, Czechia, Croatia, Austria, Poland, Hungary, Luxembourg, Romania, Slovenia) between weeks 41 (5 October) and 49 (until 6 December). While Bulgaria, Czechia and Poland did not register a sharp increase in mortality in the spring period, during the autumn the number of deaths is very high compared to the average level of the previous four years.

In the tool below you may select the country you would like to analyse.

Tool 1: Number of deaths by week

Countries contribute differently to the overall difference in the number of deaths. At different times, during 2020, various countries were registering increases in their deaths. To a large extent, the impact on the total additional number of deaths depends on the size of the country's population. In week 11 (9-15 March) this difference is mainly due to deaths occurring in Italy. Over weeks 12-13, around 84 % of deaths occur in Spain, Italy or France. With other countries gradually recording more deaths, by week 15 (6-13 April) only half of the additional deaths are reported by Spain, Italy and France. In weeks 37-48 (September-November) Poland, as well as other Central and Eastern European countries not strongly affected by the springtime peak, contribute more to the difference.

Considerable differences are evident not only across countries but also between regions of a country. In Map 1, the deaths in weeks 10 to 18 (2 March to 3 May 2020) are compared with the same weeks in 2016-2019. Regional data (available at up to NUTS 3 level depending on the countries) show how in some areas, such as the north of Italy, central Spain including Madrid, the east of France and the Paris region, the increase in the number of deaths is particularly significant. Map 2 shows the regional disparities in the rise of the number of deaths during the autumn weeks. 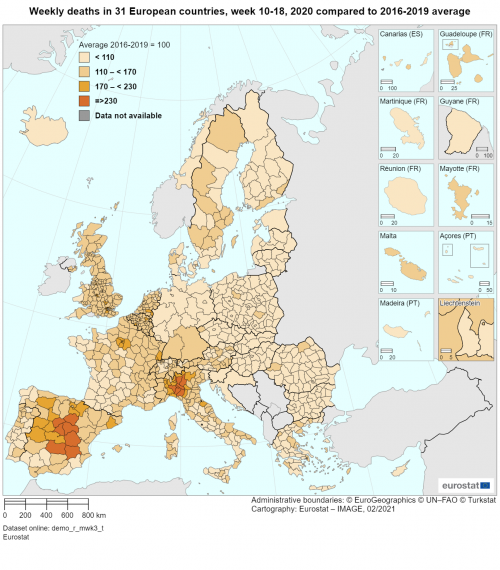 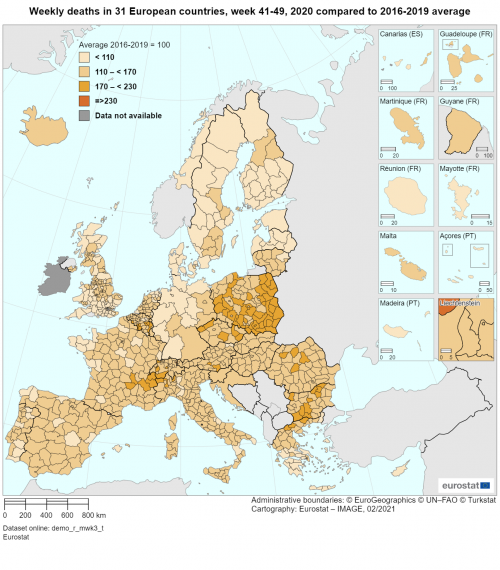 The NUTS 3 regions worst hit by mortality, over the period, are mostly in Italy and Spain. From 2 March to 3 May (weeks 10-18), Bergamo, Cremona, Segovia, Lodi, Brescia and Piacenza had more than three times more deaths than the average of the same period of the previous four years. As many as 18 of the 25 most affected regions in the EU were in Italy or Spain. During the autumn surge, deaths rose across Europe, on a much larger territory overall. This time high numbers of additional deaths were registered in Central and Eastern Europe. While extraordinary peaks in mortality were less focused on a specific number of regions, the "second wave" amounted to a larger increase in the number of deaths overall.

Introducing the time perspective, the increase in the number of deaths over time in 2020, compared with the previous years is presented in the GIF below, for weeks 1 to 48. This shows, week by week, which NUTS 3 regions have suffered most from the increase in mortality.

In the last week of February (week 9), the NUTS 3 region of Lodi, in Italy, has more than twice the number of deaths than in the same week of the previous four years. Week 10 sees the Italian regions of Bergamo and Cremona joining Lodi (all in Lombardy) in recording extremely high deaths. Week 11 (9-15 March) shows the group of heavily affected Italian northern regions growing, to include Piacenza, Parma and Brescia. The Italian regions mentioned (and Lecco and Pesaro-Urbino, too) remain affected by a high number of deaths in week 12, while the Spanish regions of Soria, Segovia, Madrid, as well as Haut-Rhin in France, have more than three times the deaths than in the same week in 2016-2019. In weeks 13-14 (23 March-5 April), the worst hit areas also include the Spanish regions of Guadalajara, Ciudad Real, Albacete, followed by Salamanca, Cuenca and Barcelona. In week 14, the regions Seine-Saint-Denis, Hauts-de-Seine, Val-d’Oise and Val-de-Marne in France, the region Noordoost in the Netherlands and Bruxelles in Belgium are also among the most affected areas.

Week 15 (6-13 April) brings a reduction in the overall death values for the affected regions of Italy and Spain. However, in central Spain, Paris region, north Italian regions, Belgian and Netherlands regions, deaths in this week are more than three times higher than normal. In May, a gradual return to the average number of deaths can be observed, with some local exceptions.

Since week 31 (27 July – 2 August), when the number of deaths started increasing again, the most affected regions are in Belgium, Spain and Romania. In week 33 (10-16 August), deaths in the Belgian regions Kortrijk, Ath and Ieper are more than twice as many as in the same week in 2016-2019, followed by other regions in Belgium, Bulgaria, France, Spain, Italy, the Netherlands, Poland, Romania, and Switzerland. In weeks 36-40 (31 August – 4 October), some regions in Greece, Finland, Spain and France are among the most affected regions.

How the aggregate was constructed

This data collection may be used to get an indirect measure of the impact of the Covid-19 pandemic. Currently, 31 countries provide mortality data, week by week, for all weeks of the years 2016-2019 as a basis for comparison: Belgium, Bulgaria, Czechia, Denmark, Germany, Estonia, Greece, Spain, France, Croatia, Italy, Cyprus, Latvia, Lithuania, Luxembourg, Hungary, Malta, the Netherlands, Austria, Poland, Portugal, Romania, Slovenia, Slovakia, Finland, Sweden, Iceland, Liechtenstein, Norway, Switzerland, the United Kingdom. A data aggregation for all these countries was made for the present article in order to facilitate analysis. This aggregation is not included in the online database of Eurostat. Ireland is not included in this aggregate due to missing data. Data received from candidate and neighbouring countries are also not presented in this article. All data available, however, are presented in the Eurostat’s online database.

Besides its major impact on people’s lives and populations’ economies and health care systems, the Covid-19 pandemic has triggered tremendous interest in related statistics. Whilst the international comparability of data associated with Covid-19 may still be arguable due to possible different rules of disease/causes of death classification and coverage issues, high-frequency data on overall mortality offer a viable alternative for internationally comparable monitoring and analyses of direct and indirect effects of the Covid-19 pandemic. Hence, in April 2020, in cooperation with the National Statistical Institutes of the European Statistical System, Eurostat set up a new special European data collection on weekly death counts, in order to support the policy and research efforts related to the Covid-19 pandemic. National Statistical Institutes regularly transmit and frequently update data to Eurostat on weekly deaths, on a voluntary basis, up to the latest available week. These data are cross-classified by sex, 5-year age-group and NUTS 3 region. Back series up to 2000 are transmitted for temporal comparisons. When such detailed cross-classification or long back series are not possible, less granular data or shorter time series may be provided to Eurostat by participating countries. Taking in due consideration the urgent need for statistical information for mortality monitoring, this data collection has been designed with timeliness as primary target.