In 2019, the highest motorway densities in EU were in the regions of big cities, large industrial conurbations and major seaports.

In 2019, the highest density of railway lines in EU were in the regions Berlin, Praha and Hamburg. 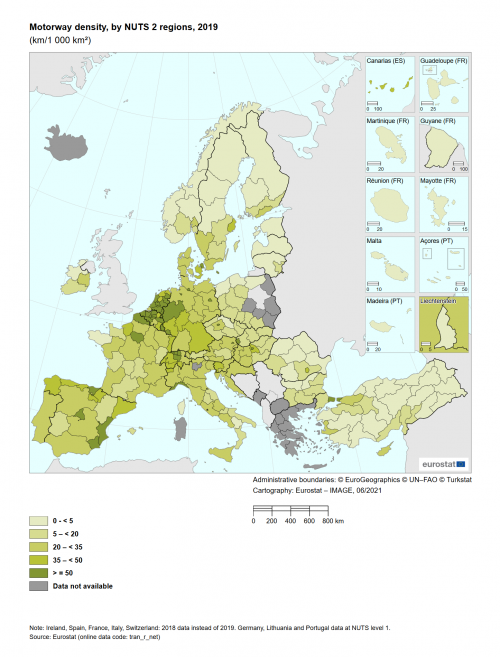 This article presents recent data on the inland transport network of the European Union (EU), EFTA and candidate countries: motorways, railways and inland waterways. The evolution of the transport network is closely linked to the general development of the economy. This is particularly true for goods transport and, to a lesser extent, for passenger transport.

The EU has one of the densest transport networks in the world. This reflects a number of factors, including population density and transport demand. Transport demand is especially high in urban, industrial and other densely populated areas. The highest motorway density is found in the regions of Germany, the Netherlands and Hungary (see Table 1). 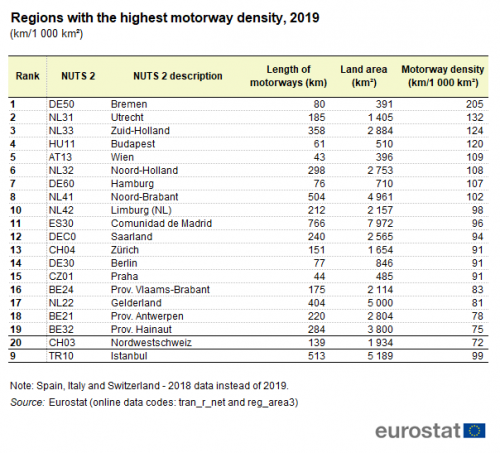 The motorway network is especially dense in regions with urbanised areas. The most significant motorway expansion between 2010 and 2019 took place in regions of Romania, Czechia, Poland, Bulgaria, Denmark, Sweden, France, Hungary and Germany (see Figure 1). This reflects the general development programmes of the motorway network in these countries over the last decade. 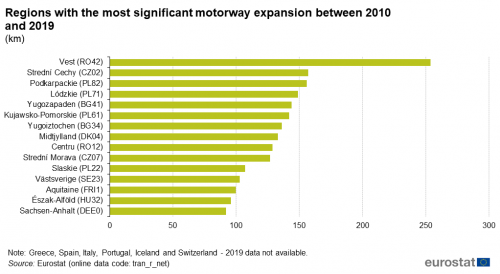 Figure 1: Regions with the most significant motorway expansion between 2010 and 2019
(km)
Source: Eurostat Eurostat (tran_r_net)

The densest motorway networks are located around key economic hubs

Comparing the length of the motorways to the area of the regions gives a good picture of the motorway infrastructure and concentration within the EU.

In relative terms, the most significant motorway expansion between 2010 and 2019 took place in the Romanian region of Sud-Est, followed by the Polish region of Kujawsko-Pomorskie and Praha in Czechia. These impressive growth rates are explained by the very limited motorway networks in these regions in the 2000’s.

The picture looks different when absolute changes over the same period are considered. The regions with the largest absolute change are located in the Romanian region Vest (+ 254 km), the Czech region Strední Cechy (+ 157 km), and the Polish region Podkarpackie (+ 156 km) (see Figure 1).

The highest motorway densities are obviously found around European capitals and other big cities, in large industrial conurbations and around major seaports.

The density of motorways on islands is generally low, as islands cannot be reached directly by road. Instead, they rely on sea or air transport. Even so, the motorway density of the region Canarias appears relatively high at 37 km/1 000 km2 (2018 data).

High share of electrified railway lines in the Benelux countries

Railway lines density is especially high in the regions of Germany, Czechia, Hungary, the Netherlands, Poland and Romania (see Map 2). Unsurprisingly, the highest rail density ratios are often observed in capital regions, such as Berlin, Praha, Budapest and Bucureşti-Ilfov where network nodes have developed. Regional rail density is also driven by the presence of economic activities such as heavy industries or seaport infrastructures.

In general, the density of railway lines is high in western and central parts of Europe and lower in the peripheral areas. The highest network densities, above 300 km/1 000 km2, can be found in three regions in Germany, one in Czechia and one in Hungary, followed by 25 other regions in Czechia, Poland, Germany, Romania, France, the Netherlands, Slovakia, Luxembourg and Hungary (above 100 km/1 000 km2). 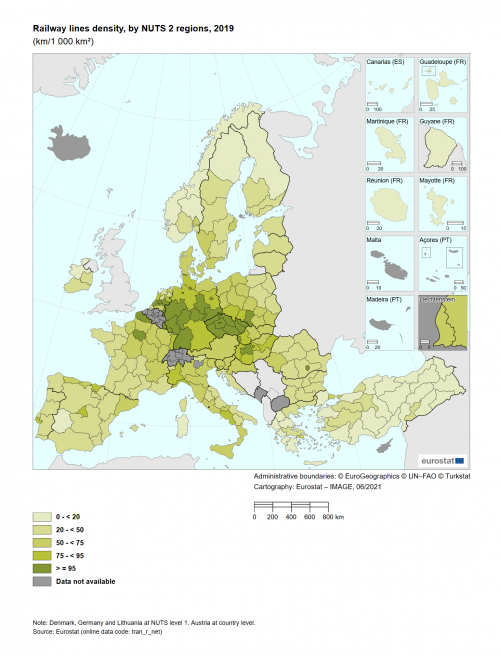 Focusing on railway infrastructure at country level, there are significant differences among countries with respect to the share of the network that is electrified. Luxembourg (97 %), Sweden (75 %), the Netherlands (73 %), Italy (72 %), Bulgaria and Austria (71 %) and Portugal (67 %) registered the highest shares, while Ireland, and the Baltic States are the only Member States where less than 20 % of the network is electrified. 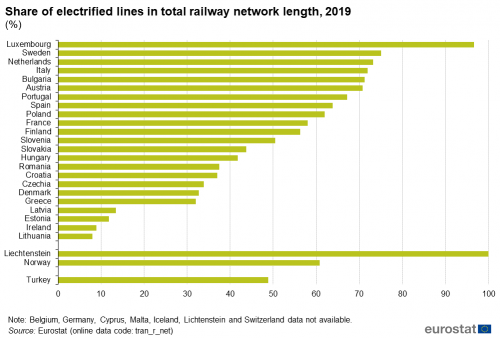 Very high density of inland waterways in the Netherlands

A very high density of more than 200 km/1 000 km2 is observed in seven regions of the Netherlands: Zeeland (285), Zuid-Holland (281), Flevoland and Noord-Holland (both 248), Utrecht (238), Friesland (NL) (227) and Groningen (213) (see Table 2). The lowest density in the Netherlands was registered in the Drenthe region (64 km/1 000 km2), which still ranked 16th amongst all regions for which data are available. A part of this dense inland waterway network plays a strategic role for freight transport between the ports of Rotterdam (located in the Zuid-Holland region) and Amsterdam (Noord-Holland) and Germany and Belgium. 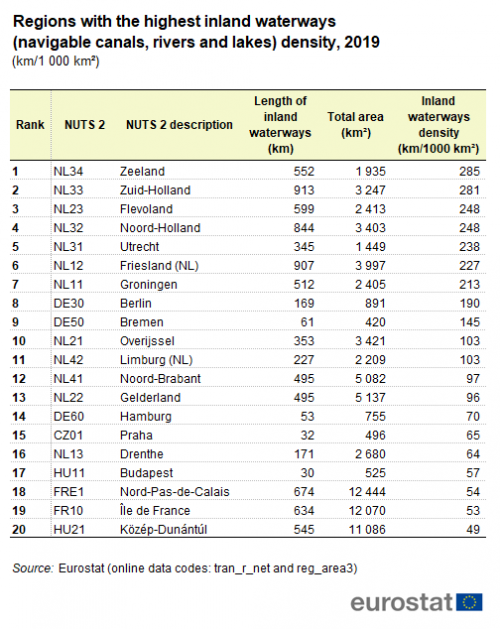 Other regions with a dense inland waterway network are found in Czechia (Praha: 65), Hungary (Budapest: 57) and France (Nord-Pas-de-Calais: 54, Île de France: 53). The network in most French regions is a mix between rivers and canals, except for Champagne-Ardenne, Picardie, Haute-Normandie, Basse-Normandie, Centre (FR), Midi-Pyrénées and Auvergne, where canals take a 100 % share and, in contrast, Poitou-Charentes where the inland waterways are entirely composed of rivers.

Eurostat collects regional statistics on the infrastructure of road, railways and inland waterways, as well as vehicle stocks and road accidents. The data are provided by the Member States, the Candidate countries and some EFTA countries on a voluntary basis using the REGWEB online application. The data are collected at NUTS 0, NUTS 1 and NUTS 2 levels for these transport indicators.

Rankings in figures and tables: as the data collection is performed on a voluntary basis, data are not available for some countries; consequently, the rankings presented are based on the available data and they should be analysed with caution.

The Nomenclature of Territorial Units for Statistics (NUTS) was established by Eurostat around 50 years ago in order to provide a single uniform breakdown of territorial units for the production of regional statistics for the Community. It has been and is updated when needed. Five smaller Member States (Estonia, Cyprus, Latvia, Luxembourg and Malta) are not sub-divided in NUTS regions.

Efficient transport services and infrastructure are vital to exploiting the economic strengths of all regions of the European Union, to supporting the internal market and growth, and enabling economic and social cohesion. They also influence trade competitiveness, as the availability, price, and quality of transport services have strong implications on production processes and the choice of trading partners.

Transport investments enable economic growth and job creations. Investing in transport infrastructure, particularly in railways and inland navigation, also contributes to the decarbonisation of transport. The sector currently accounts for a quarter of the EU's greenhouse gas emissions, of which 70 % comes from road transport.

Transport, however, faces a wide range of challenges across the EU: underinvestment, lack of suitable financing solutions, insufficiently developed and non-transparent pipelines of transport projects, continuous growth of urban populations, and various regulatory and administrative barriers. The European Commission is addressing these issues, paving the way for the competitive and sustainable EU transport system of tomorrow.

Since the global financial and economic crisis, the EU has been suffering from low levels of investment in transport infrastructure. This has held back modernisation of the EU's transport system. Collective and coordinated efforts at European level, recently boosted by the Investment Plan for Europe, need to reverse this downward trend. In particular the trans-European transport network (TEN-T) requires investment in new infrastructure, refurbishment and modernisation of the existing network. Better coordination is needed between EU countries on cross border infrastructure projects.

Building missing links at borders between EU countries and along key European routes, as well as removing bottlenecks or interconnecting transport modes in terminals, is vital for the Single Market and for connecting Europe with external markets and trade partners. The smooth functioning of the European network requires integration and interconnection of all modes of transport.

The adaptation of infrastructure to new mobility patterns and the deployment of infrastructure for clean, alternative energy sources, pose additional challenges that require new investments and a different approach to the design of networks.