In 2020, among the candidate countries and potential candidates, self-employed and family workers ranged between 17.2 % in North Macedonia and 53.9 % in Albania, whereas it was 14.3 % in the EU.

This article is part of an online publication and provides information on a range of labour market statistics for the European Union (EU) candidate countries and potential candidate, in other words the enlargement countries. Montenegro, North Macedonia, Albania, Serbia and Turkey currently have candidate status, while Bosnia and Herzegovina and Kosovo* are potential candidates.

The article provides an overview of the labour force characteristics, covering indicators such as activity rates, employment rates, and unemployment rates, as well as an analysis of the workforce by economic activity.

The economically active population, also known as the labour force, comprises employed and unemployed persons. The labour force also includes people who were not at work but had a job or business from which they were temporarily absent, for example because of illness, holidays, industrial disputes, education or training. The activity rate is the proportion of the population who are economically active.

Figure 1 presents, for the candidate countries and potential candidates as well as for the EU, the proportion of the economically active population aged 20-64 for 2010 and 2020, disaggregated to show the activity rates for men and women. 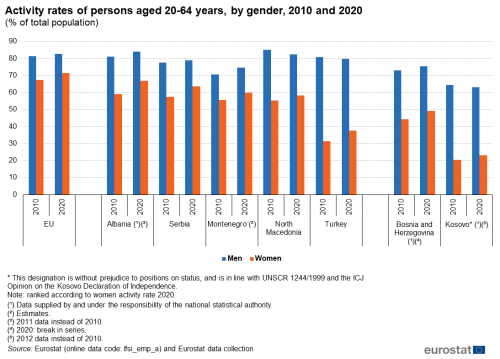 Activity rates in most of the candidate countries and potential candidates (Albania, Serbia, Montenegro and Bosnia and Herzegovina) increased from 2010 to 2020 both for men and women. The remaining candidate countries and potential candidates recorded a decrease of the activity rate for men: North Macedonia, -2.5 percentage points (pp), Kosovo, -1.3 pp (between 2012 and 2020) and Turkey, -1.1 pp. Activity rates for women were lower than in the EU both in 2010 and 2020; this also was true for men, except in 2020 for Albania (1.1 pp higher than in the EU) and in 2010 for North Macedonia (3.7 pp higher than in the EU). Activity rates increased more for women than for men between 2010 and 2020 throughout the region, as in the EU, so that the gender gap declined everywhere.

In line with international standards, the EU Labour force survey (EU LFS) defines persons in employment as those aged 15 and over, who, during the reference week, performed some work, even for just one hour per week, for pay, profit or family gain. Employment statistics are frequently reported as employment rates to discount the changing size of countries’ populations over time and to facilitate comparisons between countries of different sizes. These rates are typically published for the working age population, which is generally considered to be those aged 15-64 years, as well as for those aged 20-64 years, in order to take account of the increasing proportion of young people who remain in education. The data presented in Figure 2 show employment rates in 2010 and 2020 by gender for the 20-64 year age group for the candidate countries and potential candidates, as well as for the EU.

Since people in employment make up a large part of the labour force, statistics about these two categories often increase or decrease together. Comparisons can therefore be made between Figure 1 and Figure 2. 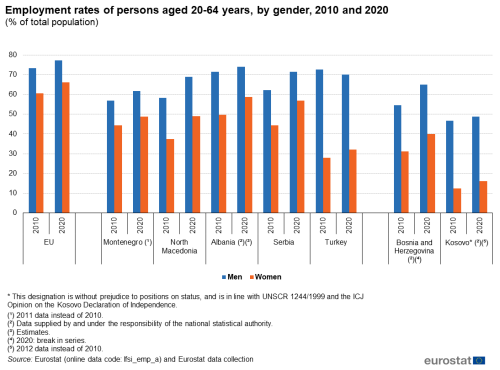 Figure 3 shows an analysis of the structure of employment for 2010 and 2020 by broad economic activities. 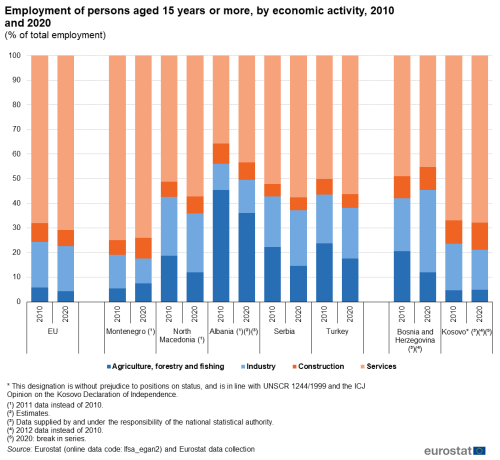 A relatively high share of the total workforce was employed in agriculture, forestry and fishing in Albania, where it was the second largest employer in 2020 with a share of employment of 36.1 %. Agriculture, forestry and fishing was also a significant employer in all the other candidate countries and potential candidates except for Kosovo (4.8 %) and Montenegro (7.5 %). Employment in this activity fell during the period 2010 to 2020 in Turkey, from 23.7 % to 17.6 %; and in Serbia from 22.3 % to 14.6 %, in both cases falling below employment in the industry sector to become the third largest employer.

The candidate countries and potential candidates can be divided into two broad groups by their share of people employed by industry in 2020. The first includes Bosnia and Herzegovina with a 33.4 % share; North Macedonia with 23.9 %; Serbia with 22.6 %; and Turkey with 20.5 %. The second comprises Kosovo with 16.3 % share of employment; Albania with 13.4 %; and Montenegro, with 10.1 %. The share of employment in industry was fairly stable or recorded only small increases or decreases over the period 2010 (or 2011/2012, depending on the data availability) and 2020 in all candidate countries and potential candidates, with the exception of Bosnia and Herzegovina where it rose by 11.9 percentage points between 2011 and 2020.

Services employed 70.9 % of the EU’s workforce in 2020. Industry had the second largest share, with 18.2 % of total employment, while the shares of employment in construction, at 6.6 % and in agriculture, forestry and fishing, 4.3 %, were much lower.

Analysis of employment by working status

Figure 4 shows the shares of employment by working status: employees, self-employed and family workers for the candidate countries and potential candidates, as well as the EU.

Self-employed and family workers together accounted for 53.9 % of total employment in Albania in 2020, reflecting, to some degree, the relative weight of agricultural activities, with work spread across numerous small-scale holdings. Self-employment and family work were significant also in the other candidate countries and potential candidates in 2020: Turkey with 28.6 % of total employment, Kosovo 26.9 %, Serbia 23.0 %, Montenegro 20.7 %, Bosnia and Herzegovina 18.4 %, and North Macedonia 17.2 %. 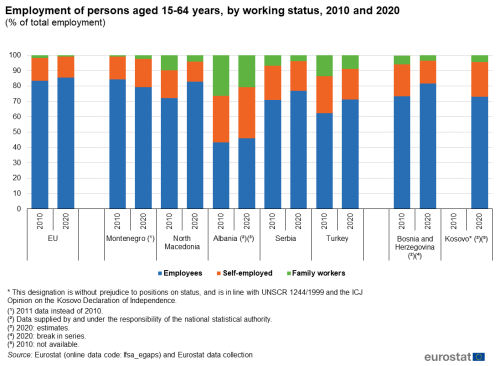 Eurostat publishes unemployment statistics based on the definition of unemployment provided by the International Labour Organisation (ILO), for which there are three criteria: being without work, actively seeking work, and being available for work. Therefore, people working only a few hours a week and who wish to work more, known as the underemployed, are excluded from the unemployment figures. The unemployment rate is the number of unemployed divided by the labour force.

In countries that have significant underemployment, understanding of the unemployment data benefits from being read in conjunction with employment data. If statistics are compiled on part-time work or on total hours worked, it may be possible to identify trends in underemployment.

In general, the unemployment rate begins to rise only some time after an economic downturn has occurred. Once the economy starts to pick up again, employers usually remain cautious about hiring new workers and there may be a lag before the unemployment rate start to fall. In addition, people who were formerly economically inactive join or rejoin the labour force, initially increasing the unemployment figures.

Data for the candidate countries and potential candidates on unemployment rates, as well as the EU, is shown in Figure 5 for the period 2010-2020. 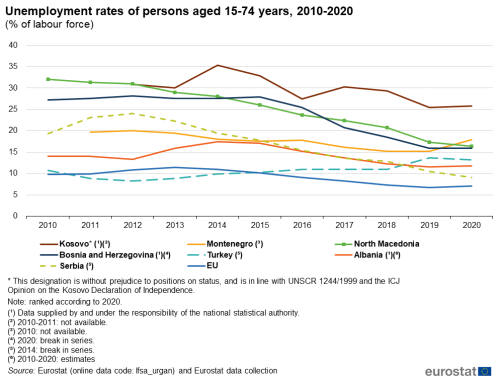 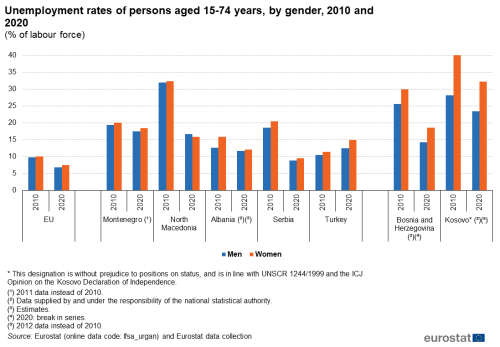 The main source for European labour force statistics is the European Union labour force survey (EU LFS). This household survey is carried out in all EU Member States in accordance with European legislation; it provides figures at least every quarter. Some of the candidate countries and potential candidates (Montenegro, North Macedonia, Serbia and Turkey) also conduct the labour force survey according to the same guidelines and their data is available free-of-charge, together with the EU data, on Eurostat’s website.

Data for the enlargement countries are collected for a wide range of indicators each year through a questionnaire that is sent by Eurostat to candidate countries or potential candidates. A network of contacts has been established for updating these questionnaires, generally within the national statistical offices, but potentially including representatives of other data-producing organisations, for example, central banks or government ministries. LFS data for Albania, Bosnia and Herzegovina and Kosovo are collected via these questionnaires.

The economically active population (labour force) comprises employed and unemployed persons, but not the economically inactive, for example children, students and pensioners as well as people caring for family members; some of these may be of working-age.

Social policymakers often face the challenge of remedying uncertainty in employment and high unemployment by designing ways to increase employment opportunities for specific groups in society, such as the young, those having working in certain economic activities, or those living in low employment regions.

The slow pace of recovery from the financial and economic crisis in the EU and mounting evidence of rising unemployment led the European Commission to propose an employment package in April 2012. This considered how employment policies intersect with a number of other policy areas in support of smart, sustainable and inclusive growth. It identified the EU's biggest job potential areas and the most effective ways for EU countries to create more jobs.

In June 2016, the European Commission adopted a Skills Agenda for Europe (COM/2016/0381 final) under the heading ‘Working together to strengthen human capital, employability and competitiveness’. This was intended to ensure that people develop the skills necessary for now and the future, in order to boost employability, competitiveness and growth across the EU.

The open method of coordination (OMC) enables the coordination of the Member States' employment policies towards common objectives for the labour market, without requiring binding European legislative measures. Through the peer reviews and the central role of the Council, it helps spreading good practices among Member States and achieving greater convergence towards the main EU goals. The OMC process for national employment policies is an integral part of the annual European Semester cycle of economic policy coordination.

Eurostat has the responsibility to ensure that statistical production of the enlargement countries complies with the EU acquis in the field of statistics. To do so, Eurostat supports the national statistical offices and other producers of official statistics through a range of initiatives, such as pilot surveys, training courses, traineeships, study visits, workshops and seminars, and participation in meetings within the European statistical system (ESS). The ultimate goal is the provision of harmonised, high-quality data that conforms to European and international standards.