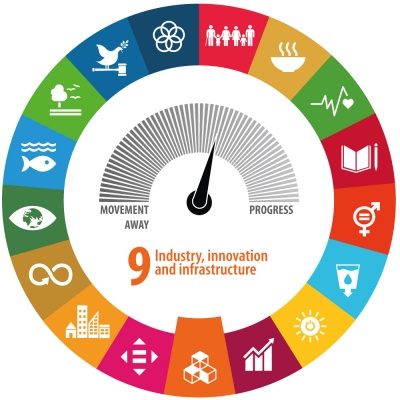 EU trend of SDG 9 on industry, innovation and infrastructure

This article provides an overview of statistical data on SDG 9 ‘Industry, innovation and infrastructure’ in the European Union (EU). It is based on the set of EU SDG indicators for monitoring of progress towards the UN Sustainable Development Goals (SDGs) in an EU context.

SDG 9 calls for building resilient and sustainable infrastructure and promotes inclusive and sustainable industrialisation. It also recognises the importance of research and innovation for finding lasting solutions to social, economic and environmental challenges.

Industry, innovation and infrastructure in the EU: overview and key trends

Monitoring SDG 9 in an EU context focuses on research and development (R&D) and innovation, and sustainable transport. As Table 1 shows, R&D and innovation in the EU has progressed in terms of human resources in science and technology, R&D personnel and patent applications over the past few years. Trends for sustainable transport on the other hand have generally been unfavourable, especially in the short term. For both freight and passenger transport, no progress towards more sustainable modes appears to have occurred, and the reduction in car CO2 emissions has stalled.

R&D expenditure is a key enabling factor for smart, sustainable and inclusive growth. Introducing new ideas to the market promotes job creation, labour productivity and efficient use of resources. Highly skilled human resources are imperative for keeping the EU’s research and innovation capacity and competitiveness up to date. Innovative products and services, often as a result of R&D activities, contribute to smart growth and sustainable industrialisation. R&D and innovation are also essential for finding solutions to societal and environmental challenges such as climate change and clean energy, security, and active and healthy ageing.

EU expenditure on R&D has shown only modest growth

The EU economy is facing increasing global competition and can only remain competitive with other countries and regions in the world by strengthening its scientific and technological base. Therefore, one of the key aims of EU policies over recent decades has been to encourage greater investment in R&D. However, EU gross domestic expenditure on R&D in relation to GDP (R&D intensity) has shown only modest growth over the past 15 years. R&D intensity reflects both growth in spending on R&D and growth in GDP. After prolonged stagnation between 2000 and 2007, R&D intensity has increased slowly and has stabilised at slightly above 2.0 % since 2011, reaching 2.19 % in 2018. In absolute terms, this corresponds to an R&D expenditure of about EUR 295 billion in 2018 [1]. With a gap of 0.81 percentage points, the EU nevertheless remains far from its 3 % target for 2020. 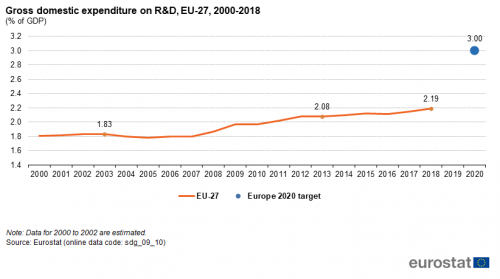 An analysis of gross domestic expenditure on R&D by sector of performance shows that the two biggest spenders in 2018 remained the business enterprise sector (66.2 % of total R&D expenditure) and the higher education sector (21.5 %). The share of the government sector was about 11.4 %, while the private non-profit sector accounted for less than 1.0 % of the total R&D expenditure.

The business enterprise sector accounts for the lion’s share of total R&D expenditure and has increased its R&D intensity from 1.16 % of GDP in 2003 to 1.45 % in 2018, showing growth of 0.29 percentage points over 15 years. In contrast, the R&D intensities of the three other sectors — higher education, government and private non-profit — have more or less stagnated at lower levels. 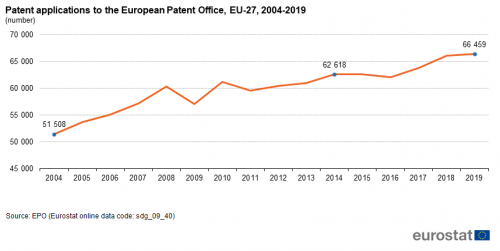 Achieving the Sustainable Development Goals will require significant innovation and will create new scientific and technical occupations in key manufacturing and other sectors, for example in the renewables, manufacturing, high-tech services or construction sectors [3]. This type of structural change will help to accommodate and stimulate the development of a highly skilled labour force.

The share of R&D personnel in the economically active population — including researchers and other staff employed directly in R&D — has increased steadily since 2003, from 0.91 % to 1.35 % in 2018 (full-time equivalent). This trend was mainly driven by the business enterprise sector, which provided jobs for more than half of the R&D workforce in 2018.

The indicator on human resources in science and technology (S&T) provides a broader picture than R&D personnel, encompassing people who have either successfully completed a tertiary-level education or who are employed in an S&T occupation where such education is normally required. Similar to R&D personnel, the share of human resources in S&T has grown continuously in the EU since 2002. In 2019, it reached 46.9 % of the EU’s economically active population. 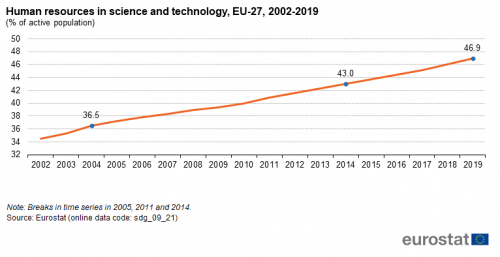 Well-functioning and efficient transport and mobility systems are key elements for a competitive economy. Growth in transport activities puts increasing pressure on natural resources and on societies. Emissions of greenhouse gases, air pollutants and noise from transport affect the climate, the environment and human health. As the transport sector is responsible for nearly one quarter of greenhouse gas (GHG) emissions in the EU (see the article on SDG 13 ‘Climate action’) sustainable transport is an essential ingredient in sustainable development strategies. Rethinking future mobility includes optimising the use of all means of transport, promoting car sharing and the integration between different modes of collective transport such as train, tram, metro, bus and taxi (multimodal transport).

The composition of passenger transport has not changed substantially since 2000, with passenger cars still accounting for almost 83 % of total land passenger transport in the EU in 2017 [4]. The share of buses and trains has fallen slightly over the same period, from 17.5 % in 2002 to 17.1 % in 2017, with a short period of moderate improvement, resulting in a peak of 18.2 % in 2013. In the short term, between 2012 and 2017, the share of these transport modes decreased by 0.6 percentage points.

New car fleets are becoming cleaner: average carbon dioxide (CO2) emissions from new passenger cars have fallen since 2007, reaching 119.6 g CO2 per km in 2018. However, a slight increase in CO2 emissions since 2016 has pushed the EU further away from its target of 95 g CO2 per km set for 2021.

Considerable differences do exist at the country level though. In 2018, three countries (Latvia, Lithuania and Romania) had higher freight transport shares for rail and inland waterways than for road. Particularly high shares of rail transport were reported from the Baltic countries Latvia, Lithuania and Estonia [5]. In the Netherlands, freight transport via inland waterways still plays a very important role (modal split of 43.2 % in 2018 [6].

To combat a wide range of political, economic and sustainability challenges that the EU is facing, SDG 9 calls on countries to build resilient infrastructure, promote inclusive and sustainable industrialisation and foster innovation. Inclusive and sustainable industrial development is the primary source of income and allows for rapid and sustained increases in living standards for all people. Research and development (R&D) and innovation drive economic growth, job creation, labour productivity and resource efficiency. They are crucial for a knowledge-based economy and to ensuring EU companies remain competitive. Similarly, investments in sustainable and energy-efficient transport and mobility systems are key elements for achieving sustainable development.