Take urgent action to combat climate change and its impacts 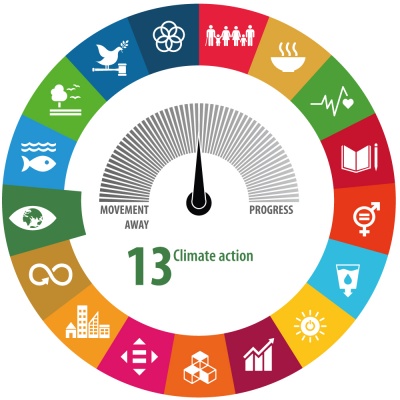 This article provides an overview of statistical data on SDG 13 ‘Climate action’ in the European Union (EU). It is based on the set of EU SDG indicators for monitoring of progress towards the UN Sustainable Development Goals (SDGs) in an EU context.

This article is a part of a set of statistical articles, which are based on the Eurostat publication ’Sustainable development in the European Union — Monitoring report on progress towards the SDGS in an EU context — 2020 edition’. This report is the fourth edition of Eurostat’s series of monitoring reports on sustainable development, which provide a quantitative assessment of progress of the EU towards the SDGs in an EU context.

Goal 13 seeks to implement the commitment to the United Nations Framework Convention on Climate Change and deliver on the Green Climate Fund. It aims to strengthen countries’ resilience and adaptive capacity to climate-related natural hazards and the resulting disasters with a special focus on supporting least-developed countries.

Climate action in the EU: overview and key trends

Monitoring SDG 13 in an EU context focuses on climate mitigation, climate impacts and initiatives that support climate action. While the EU has made some progress in climate mitigation over the past few years, as shown in Table 1, it continues to face unfavourable trends in climate impacts, such as rising surface temperatures and ocean acidification. Moreover, economic losses due to climate-related events have increased in recent years, although these remain subject to high year-to-year variability due to the natural variability of the underlying hazards.

Climate mitigation aims to reduce emissions of climate-harming greenhouse gases (GHG) that originate from human activity through measures such as promoting low-carbon technologies or encouraging sustainable forest management and land use that enhance GHG sinks. The EU wants to reach net-zero GHG emissions by 2050 alongside the pursuit of its climate adaptation and resilience objectives [1]. Annual change in GHG emissions serves as the main indicator to track the success of its climate mitigation measures. In the EU, the highest share of emissions comes from the production and consumption of energy [2]. As a result, curbing climate change in an EU context requires a shift to less carbon-intensive energy systems. However, all economic sectors must reach near-zero GHG emissions to make the long-term climate target achievable.

The EU has reduced its GHG emissions by 20.6 % compared with 1990 levels, but based on past trends it is not on-track to meet its 2030 target

On its way to net-zero GHG emissions by 2050, the EU aims to reduce its GHG emissions by 20 % by 2020 and by 40 % by 2030, compared with 1990 levels. In 2018, provisional data suggest that EU emissions had already fallen by 20.6 % % [3] and thus were below the 2020 target. A large proportion of these reductions have occurred over the past 15 years, with emissions falling by 16.2 % between 2003 and 2018. Electricity and heat generation activities achieved the largest absolute reductions [4], by consuming less fossil fuel [5] and increasing their use of renewable energies, which delivered a share of 18.9 % of total energy consumption in 2018 (see the article on SDG 7 ‘Affordable and clean energy’).

The short-term trend has been less favourable, with GHG emissions rising slightly between 2014 and 2017. Nevertheless, thanks to reductions between 2017 and 2018, EU emissions have shown a decline over the past five years (2013 to 2018), albeit by only 2.7 %. However, because of this slowdown in emissions reductions, the EU is currently not on-track to meeting its 40 % target by 2030. This assessment based on past progress does not take into account further developments such as the pathways and the planned measures contained in Member States’ National Energy and Climate Plans which indicate the EU will meet its 2030 GHG target&bsp;[6]

A sectoral breakdown of the years 1990 and 2018 shows that all sectors of the economy contributed to GHG emissions reductions, except transport[7]. Fuel combustion in the energy industries showed the strongest absolute decrease in emissions, although it remained the largest source of GHG emissions in 2018. In contrast, emissions from fuel combustion in transport (international aviation and shipping are not included in the calculations) were 23.7 % higher in 2018 than in 1990, despite reductions between 2007 and 2013. After 2007, reduced demand for freight transport in the wake of fuel price rises and the economic recession, as well as energy efficiency improvements as a result of CO2 standards for new cars and vans, contributed to emissions reductions [8]. However, these could not offset growth in overall traffic. In 2018, transport accounted for 21.3 % of total EU emissions and was therefore the second largest emitter in the EU after the energy industries (26.2 %). Emissions from international aviation were more than twice as high in 2018 compared with their 1990 levels. In total, domestic transport and international aviation accounted for a quarter (24.5 %) of the EU’s GHG emissions in 2018.

Although overall GHG emissions from transport have not reduced in line with other economic sectors, CO2 emissions per km for new passenger cars have been decreasing since 2007. Overall, between 2013 and 2018, CO2 emissions per kilometre (km) decreased by 5.4 % or 6.8 grams per km, reaching 119.6 grams of CO2 per km in 2018. However, after reaching a low of 117.6 grams in 2016, average CO2 emissions have seen a slight upward trend for the second consecutive year in 2018 (see also chapter on SDG 12 ‘Responsible consumption and production’). Meeting the 2021 target of 95 grams of CO2 per km driven will therefore require further progress. 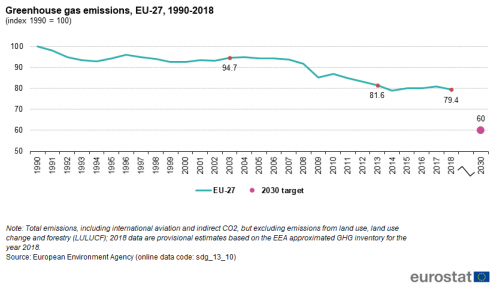 Per capita emissions have continued to fall in most EU countries

Across the EU, per capita GHG emissions in 2018 ranged from 5.2 tonnes to 18.3 tonnes of CO2 equivalents. Luxembourg by far exceeded the per capita emissions of other Member States, which can be partly attributed to a considerably higher number of commuters and transit traffic flowing into and through the country [9]. Compared with 2013, per capita GHG emissions have fallen in 14 Member States and increased in the remaining 13. The strongest increase was reported by Hungary, with emissions growing by 13.3 % between 2013 and 2018 followed by Cyprus with emissions growing by 11.4 %. Malta and Luxembourg reported the strongest reductions, of 30.7 % and 19.3 % respectively. 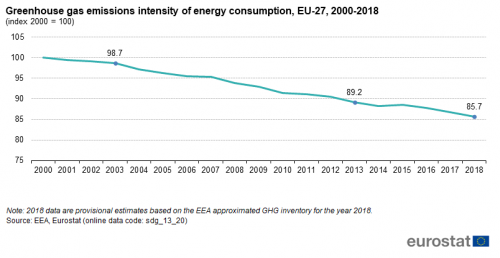 Climate impacts refer to climate change-induced changes to environmental, social and economic systems. Three indicators are used to monitor climate impacts in the EU: average global and European temperature, ocean acidity, and the economic costs that arise as a result of weather- and climate-related disasters. These indicators indirectly provide an indication of trends in terms of climate change vulnerability.

Near-surface air temperature gives one of the clearest signals of global and regional climate change, as it has been measured at the same locations for decades. Historical recordings of the combined global land and marine temperature show a clear upward trend. In the decade from 2009 to 2018, average global near surface temperature was the hottest on record with an increase of 0.91° to 0.96° C when compared to pre-industrial levels. The data — especially global mean temperatures in the past five years — indicate that roughly half of the warming towards the 2 °C threshold has already occurred [12]. Warming effects are stronger over land than water, and as a result, warming in the northern hemisphere is more pronounced than in the southern hemisphere [13]. For this reason, the average annual temperature over the European continent has increased by more than the global average. In addition, the decade from 2009 to 2018 was the hottest on record in Europe with an average temperature deviation of 1.6° to 1.7° C above pre-industrial times.

Ocean acidity is another important indicator of the environmental impacts of climate change: as CO2 is absorbed into the world’s oceans, it increases the water’s acidity. In 2018, the average acidity was 8.06 pH, which is an unprecedented low over pre-industrial levels of 8.2 (lower pH values mean higher acidity) [14]. Despite considerable annual variability, the decline in ocean pH has been consistent (see the chapter on SDG 14 ‘Life below water’ for a more detailed discussion). 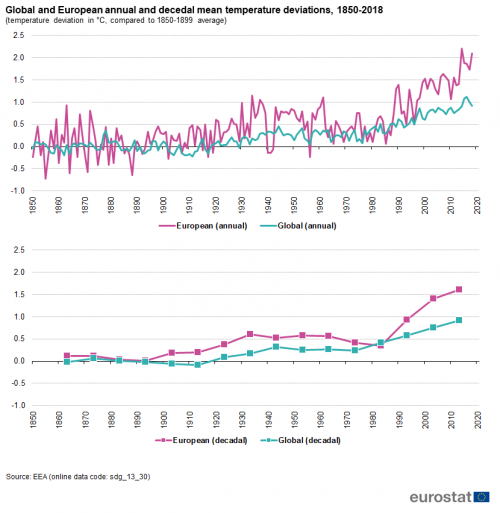 Statistical attribution studies have shown that various weather- and climate-related extremes in Europe and beyond have become more severe and/or more frequent as a result of global climate change [15]. Reported economic losses generally reflect monetised direct damages to certain assets and as such should be considered to be only partial estimates of damage. Losses related to mortality, cultural heritage or ecosystems services are not considered; their inclusion would considerably raise the estimate [16]. According to the Intergovernmental Panel on Climate Change, the long-term increases in economic losses from weather and climate-related disasters has been mainly caused by increasing exposure of people and economic assets [17]. 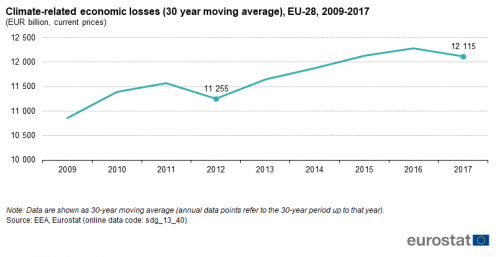 Climate actions occur at multiple levels of governance in the EU and take various forms, such as policies, economic and strategic planning and financing schemes, among others. At the EU level, climate change mitigation and adaptation has been integrated into all major spending programmes [22] and climate mitigation and adaptation is also fully integrated in the Covenant of Mayors, with thousands of cities in Europe and worldwide being part of the initiative, which mobilises local governments and regions to make voluntary but ambitious climate commitments.

The EU and its Member States are committed to raising money to combat climate change, as part of the developed countries' goal to jointly mobilise USD 100 billion per year by 2020 through to 2025, from a wide variety of sources, instruments and channels [23].

Total EU public finance contributions (including all 27 Member States as well as the EU institutions) increased from about EUR 12.9 billion in 2014 to EUR 19.4 billion in 2017 — a 49.7 % increase in three years. The largest contributor in the 2014 to 2017 period was Germany, with contributions increasing from EUR 5.1 billion to EUR 6.7 billion, followed by France (see Table 13.6). The European Commission and the European Investment Bank (EIB) were the third and fourth largest donors in 2017, respectively. 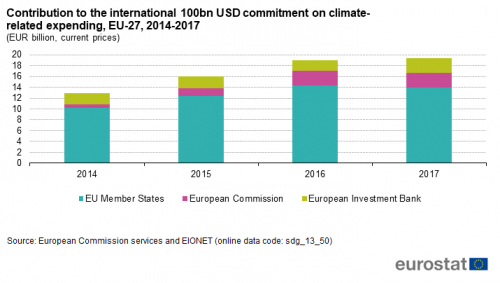 The EU also supports the Covenant of Mayors for Climate and Energy, which was established in 2008 and is one of the EU flagship climate initiatives. The Covenant of Mayors mobilises local governments and regions to make voluntary but ambitious climate commitments that help achieve emission reduction targets in and outside the EU, and increase the climate resilience of European economies and societies. While initially focusing on mitigation measures only, from 2015 onwards the Covenant of Mayors for Climate and Energy has explicitly concentrated on mitigation and adaptation measures  [24]. 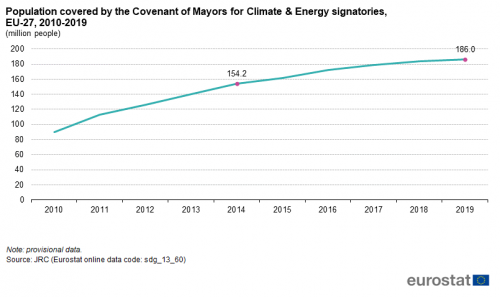 Climate change already has observable effects, such as increased average global air and ocean temperatures, changes in precipitation patterns, a rising global average sea level and increasing ocean acidity. The impacts of climate change threaten the viability of social, environmental and economic systems and may make some regions less habitable due to food and water scarcity. The European Green Deal is a set of policy initiatives brought forward by the European Commission which aim to transform the EU into a fair and prosperous society, with a modern, resource-efficient and competitive economy where there are no net emissions of greenhouse gases in 2050. Interim targets for 2020 and 2030 for reductions in greenhouse gas (GHG) emissions and energy consumption and an increase in the share of renewable energy should help the EU realise its vision for a GHG emission neutral economy. Moreover, the EU works to increase the climate resilience of its Member States and the EU as a whole, and aims to step up its ambition by updating its 2013 Adaptation Strategy. Because climate change is a global, cross-border challenge that affects areas differently, tackling it requires international coordination and cooperation. The EU has taken a leading role in this context by engaging in international negotiations, pursuing the Paris Agreement goals and supporting climate initiatives around the world.

More detailed information on EU SDG indicators for monitoring of progress towards the UN Sustainable Development Goals (SDGs), such as indicator relevance, definitions, methodological notes, background and potential linkages, can be found in the introduction of the publication ’Sustainable development in the European Union — Monitoring report on progress towards the SDGS in an EU context — 2020 edition’.