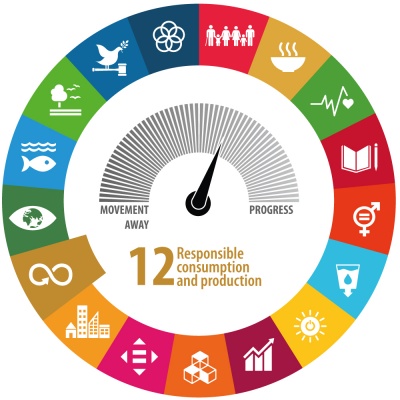 EU trend of SDG 12 on responsible consumption and production

This article provides an overview of statistical data on SDG 12 ‘Responsible consumption and production’ in the European Union (EU). It is based on the set of EU SDG indicators for monitoring of progress towards the UN Sustainable Development Goals (SDGs) in an EU context.

SDG 12 calls for a comprehensive set of actions from businesses, policy-makers, researchers and consumers to adapt to sustainable practices. It envisions sustainable production and consumption based on advanced technological capacity, resource efficiency and reduced global waste.
Full article

Responsible consumption and production in the EU: overview and key trends

Monitoring SDG 12 in an EU context focuses on developments in the areas of: decoupling environmental impacts from economic growth; the green economy; and waste generation and management. As Table 1 shows, the EU has made some progress towards decoupling environmental impacts from economic growth, increasing the value added from green products and services, and managing waste. However, waste generation as well as the consumption of toxic chemicals have increased over the past few years and average CO2 emissions from new cars are not falling fast enough to meet the target.

Economic growth improves people’s well-being but has long been associated with growing resource and energy consumption. Increasing consumption can harm the environment and contributes to climate change. To tackle this challenge, the EU has launched a new growth strategy — the European Green Deal — that aims to transform the EU into a fair and prosperous climate-neutral society, with a modern, resource-efficient and competitive economy where economic growth is decoupled from resource use [1]. It focuses on improving resource- and energy-use efficiency by restructuring economies so they produce more from the same resource and energy inputs.

The EU’s progress in this area is monitored by four indicators. Two look at the ratio of resource use (materials and energy) to gross domestic product (GDP) while the other two look at the harmful environmental impacts of consumption of toxic chemicals and CO2 emissions related to transport.

The observed trends, however, need to be interpreted with caution, as they might not be entirely due to the success of environmental policies. It is likely that the drop in DMC from 2008 onwards was strongly influenced by the economic crisis. Since the beginning of economic recovery in 2013, DMC has increased by 6.8 %. However, despite the recent increase, in 2018 total DMC was still 15.1 % lower than in 2007, the year before the economic crisis began. This development was mostly caused by ups and downs in construction activities, which account for the lion's share of total material use but contribute, in relative terms, much less to the EU economy [6].

Most everyday products used by businesses and consumers are produced with the help of chemicals. This makes them a significant contributor to the EU economy, with sales worth EUR 565 billion in 2018 [7]. The consumption of chemicals provides benefits to society, but can also entail risks to the environment and human health. Risk depends on both the hazard presented by the chemicals and the exposure to them. Tracking the consumption volumes of industrial chemicals that are hazardous to human and environmental health is, therefore, used as a proxy for human exposure [8]. 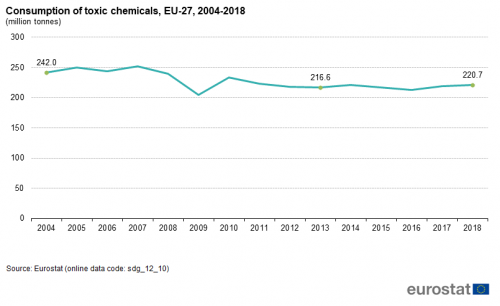 In 2017, cars were responsible for around 14 % of total EU-28 emissions of carbon dioxide (CO2), the main greenhouse gas [9]. To reduce the negative impact of passenger cars on the environment, the EU has set mandatory targets for fleet-wide average emissions of new passenger cars of 130 grams of CO2 per kilometre in 2015 and 95 grams of CO2 per kilometre in 2021 [10]. For each manufacturer’s new car fleet, a specific emission target is set according to the average mass of its new vehicles, in such a way that the above overall targets for the EU’s average fleet emissions are met.

It should also be noted that under real-world driving conditions, new passenger cars in the EU in 2015 emitted on average around 40 % more than in the laboratory [11]. In recognition of these shortcomings, in September 2017 the EU introduced the Worldwide Harmonised Light Vehicles Test Procedure (WLTP), which should yield more realistic CO2 emission values [12]. The new emission targets for 2025 and 2030 have been set on the basis of the WLTP emission values. 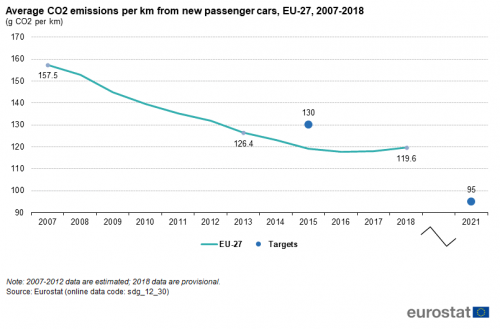 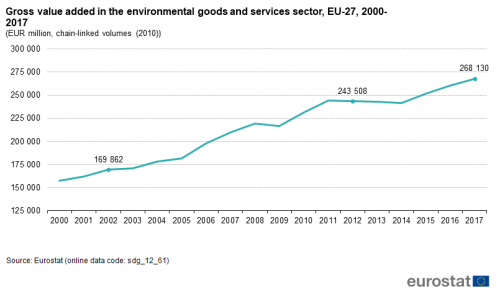 Production and consumption patterns characterised by products being made, used and disposed of in an accelerated fashion are not sustainable. Reducing both the input of materials and the output of wastes by closing economic and ecological loops of resource flows is the essence of a circular economy. Waste should be seen as a resource and more recycling would put materials back in the economy and ensure they are kept in circulation to preserve the value embedded in them. Therefore, the EU aims to move towards a circular economy where materials and resources are kept in the economy for as long as possible, and waste is minimised.

In the short term, the waste generation has increased, while the circular material use rate has stagnated

In 2016, 786 million tonnes of waste, excluding major mineral waste, were generated in the EU, which corresponds to 1 765 kilograms (kg) of waste per inhabitant [17]. 7.5 % of the generated waste (excluding major mineral wastes) — corresponding to 132 kg per resident — was hazardous to health or the environment [18]. When not managed sustainably, all of this waste could have a huge impact on the environment, causing pollution and greenhouse gas emissions, as well as significant losses of materials [19]. Over the long-term period, the EU has decreased the amount of waste, excluding major mineral waste, generated per capita by 1.9 % between 2004 and 2016. The short-term trend, however, has not been favourable, with the figure increasing by 2.6 % between 2012 and 2016.

Data for the recycling of waste excluding major mineral wastes show that 56 % of waste in the EU was recycled in 2016 [20]. The difference between this relatively high end-of-life recycling rate and the CMU rate (11.2 % in 2017) may seem surprising at first sight. However, the comparatively low degree of circularity in the EU can be attributed to two structural barriers. First, a large fraction of these materials is used to build and maintain buildings, infrastructure and other long-life goods and is not readily available for recycling. A second barrier is the large amount of material used to generate energy. For these materials, in particular for fossil fuels, closing the loop is hardly possible and the high share of these materials keeps the degree of circularity low [21]. 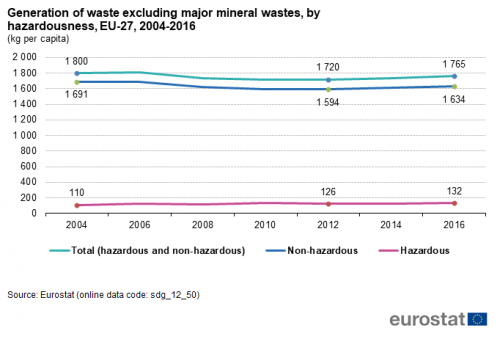 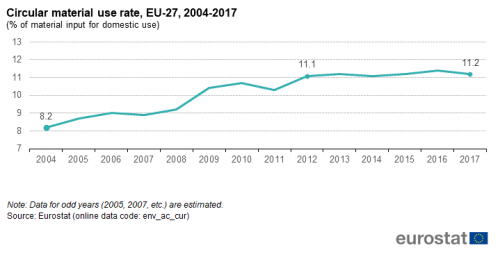 Consumption and production patterns have wide environmental impacts. Sustainable production and consumption patterns use resources efficiently, respect resource constraints and reduce pressures on natural capital to increase overall well-being, keep the environment clean and healthy, and safeguard the needs of future generations. The rise in living standards and quality of life in Europe since the end of World War II has been made possible through increases in income, production and consumption, which so far have gone hand in hand with more resource extraction and growing pressures on natural capital (air, water, land and biodiversity) and the climate. Since we live on a planet with finite and interconnected resources, the rate at which they are used has relevant implications for today's prosperity and lasting effects on future generations. It is thus important for the EU to decouple economic growth and the improvement of living standards from resource use and the eventual negative environmental impacts. This involves increasing the circularity of materials in the economy, thereby reducing both the need for resource extraction and the amount of waste ending up in landfills or incineration. It also means safe management of chemicals and shifting away from carbon-intensive energy carriers towards sustainably produced renewable energy sources. Such an approach would not only reduce environmental pressures, but also provide major economic benefits.