The total area under organic farming in the EU continues to increase, and in 2018 covered 13.4 million hectares of agricultural land. 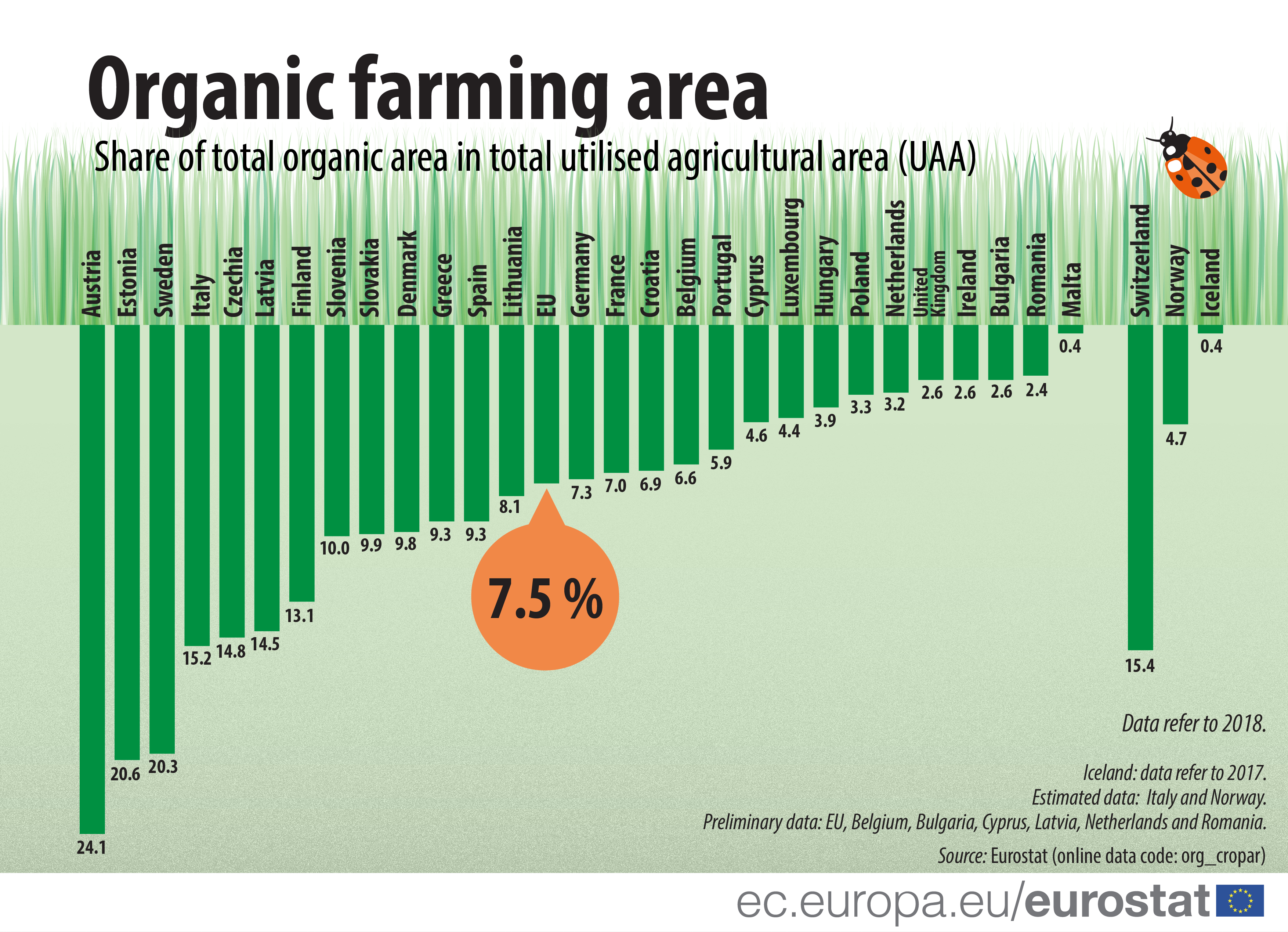 This article describes the situation of organic farming in the European Union (EU). Wherever possible, a comparison with agriculture as a whole is made.

Total organic area continued to increase in the EU 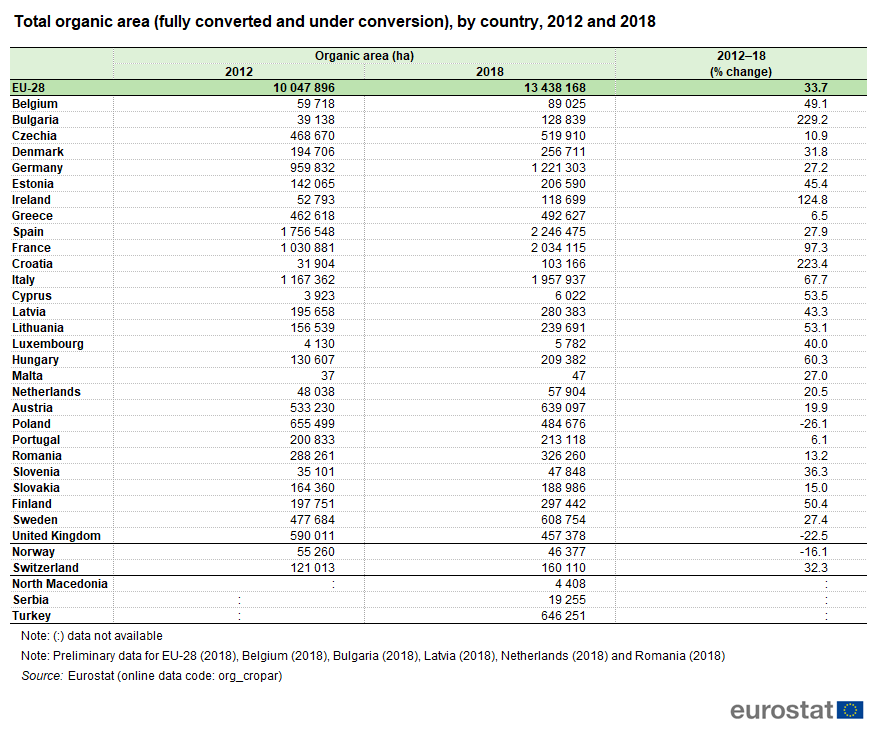 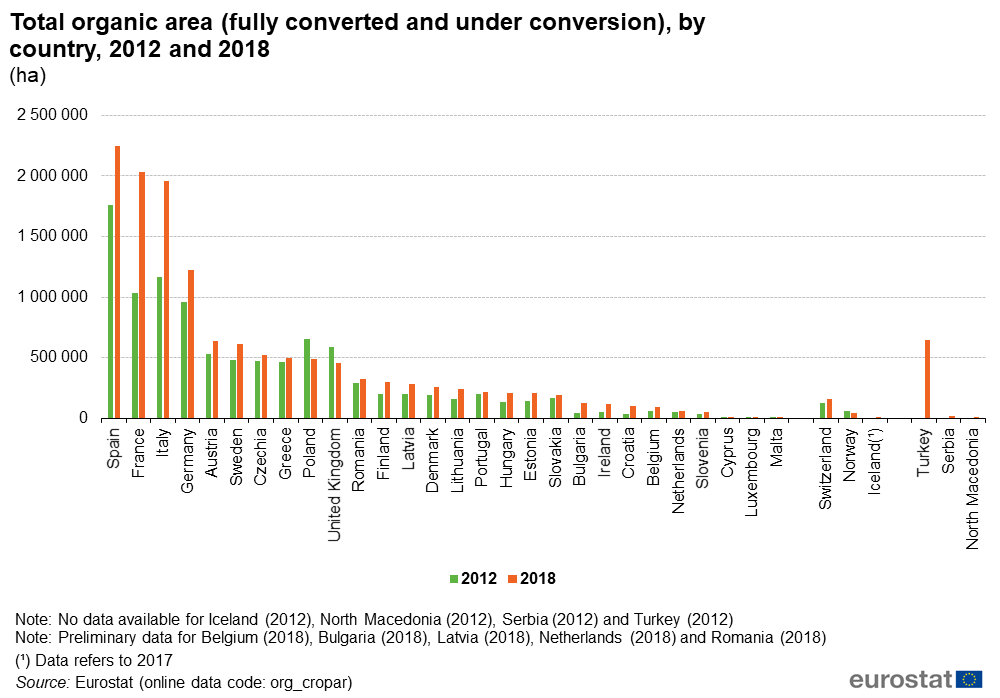 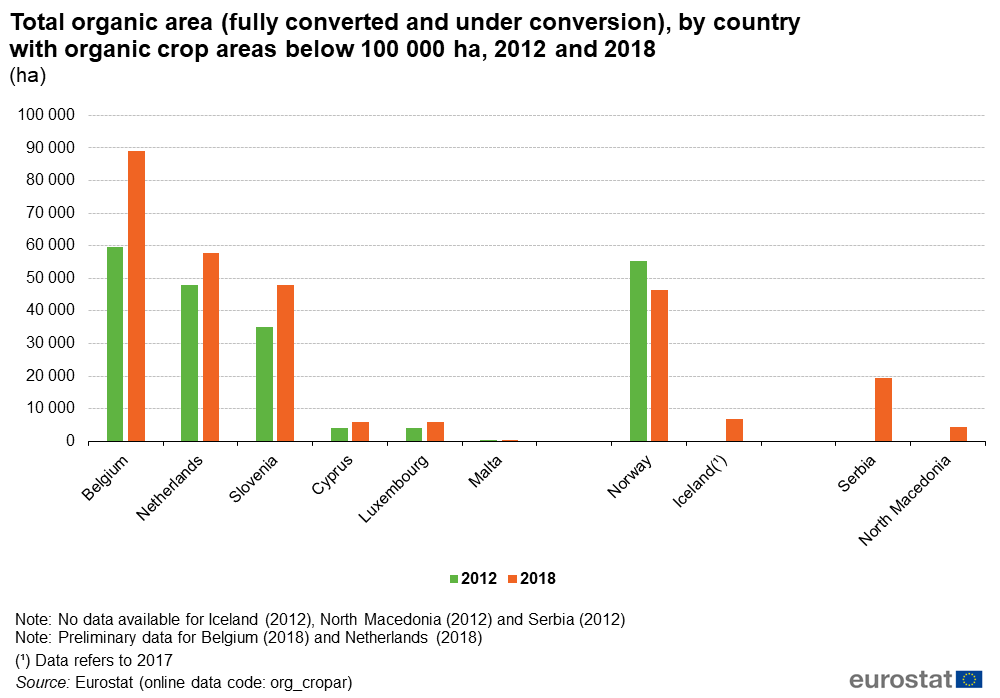 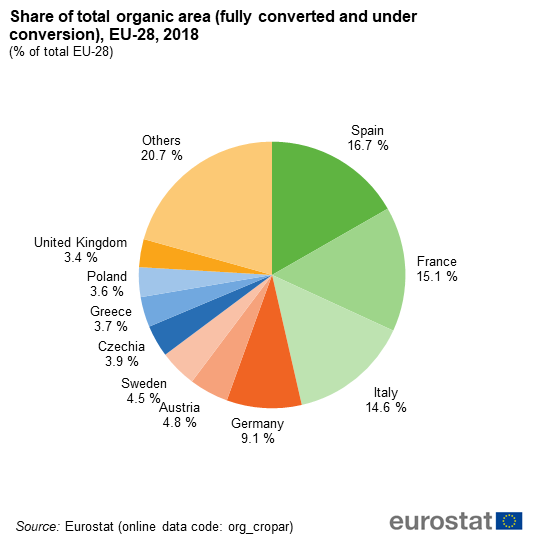 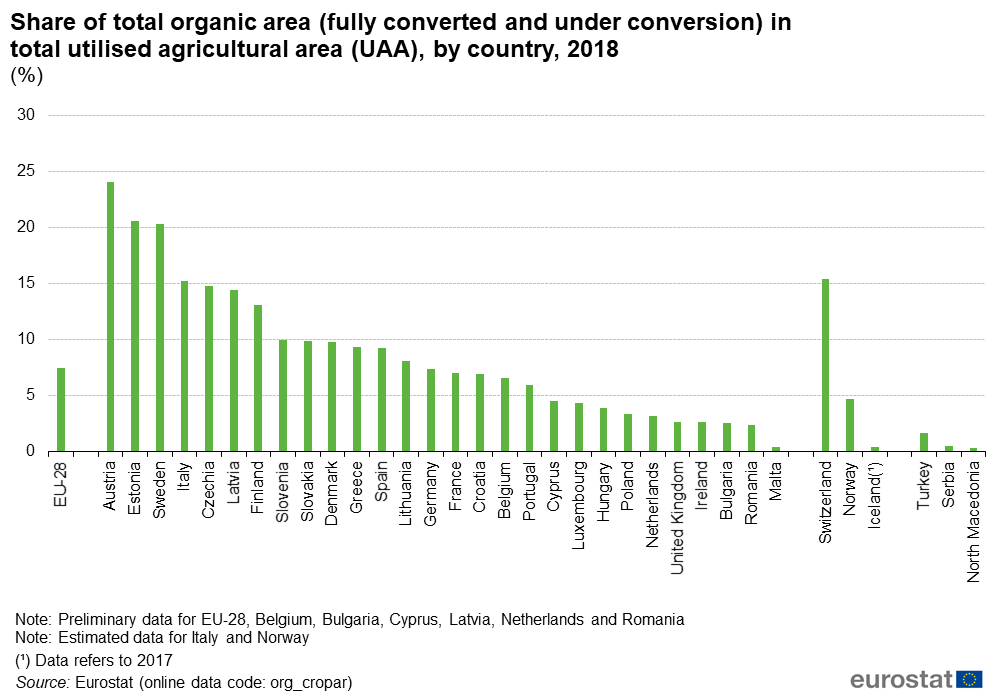 Organic farming in the EU regions

The extent of organic farming varies considerably across EU regions (see Map 1). EU regions data from the Farm structure survey can be used to further describe the situation. The latest reference year for which regional data are available is 2016.

The highest share of organic farming was reported in the Salzburg region of Austria, where about one half (52 %) of the total utilised agricultural area was used for organic farming in 2016. There were a further seven regions where organic farming accounted for upwards of one quarter of total utilised agricultural area: Severozápad in Czechia (30 %), Norra Mellansverige in Sweden (29 %), Calabria in Italy (29 %), Mellersta Norrland in Sweden (28 %), Burgenland in Austria (27 %), Sicilia in Italy (26 %) and Moravskoslezsko in Czechia (25 %). 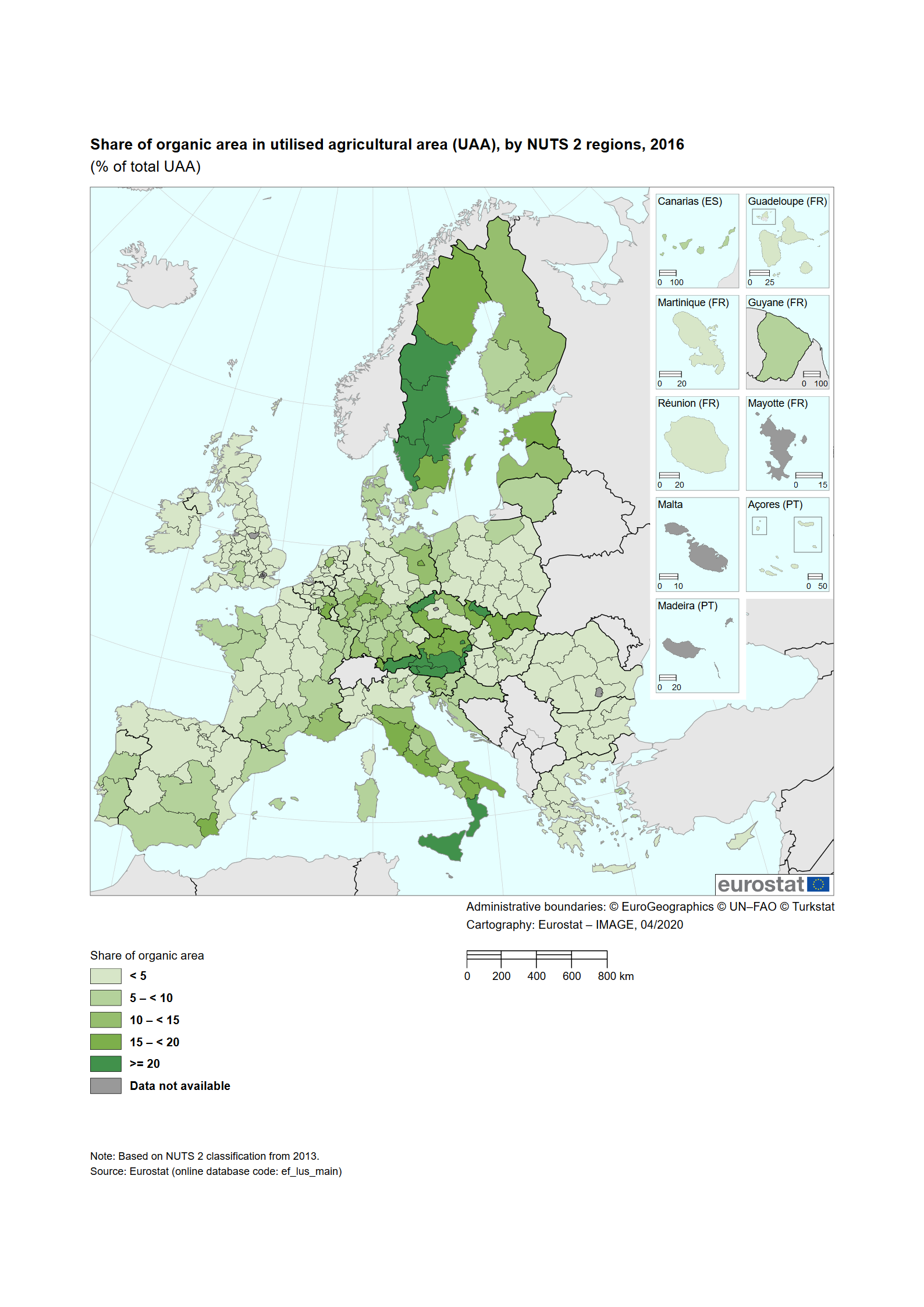 Compared with 2013, the largest increase in share of organic farming was observed in Calabria in Italy and Salzburg in Austria (each +11 percentage points (p.p.)), closely followed by Sicilia in Italy and Région de Bruxelles-Capitale in Belgium (each +9 p.p.), as well as Åland in Finland (+8 p.p.).

The potential for organic production continued to rise in 2018

Organic production comes from fully converted areas. The area under conversion as a percentage of the total organic area can give an indication of the potential growth in the organic sector in the years to come. In 2018[3], Czechia, Portugal, the Netherlands, Slovakia and the United Kingdom had a share of less than 10 % under conversion, while nine EU Member States had shares between 10 % and 20 % and twelve exceeded 20 % (see Figure 4). 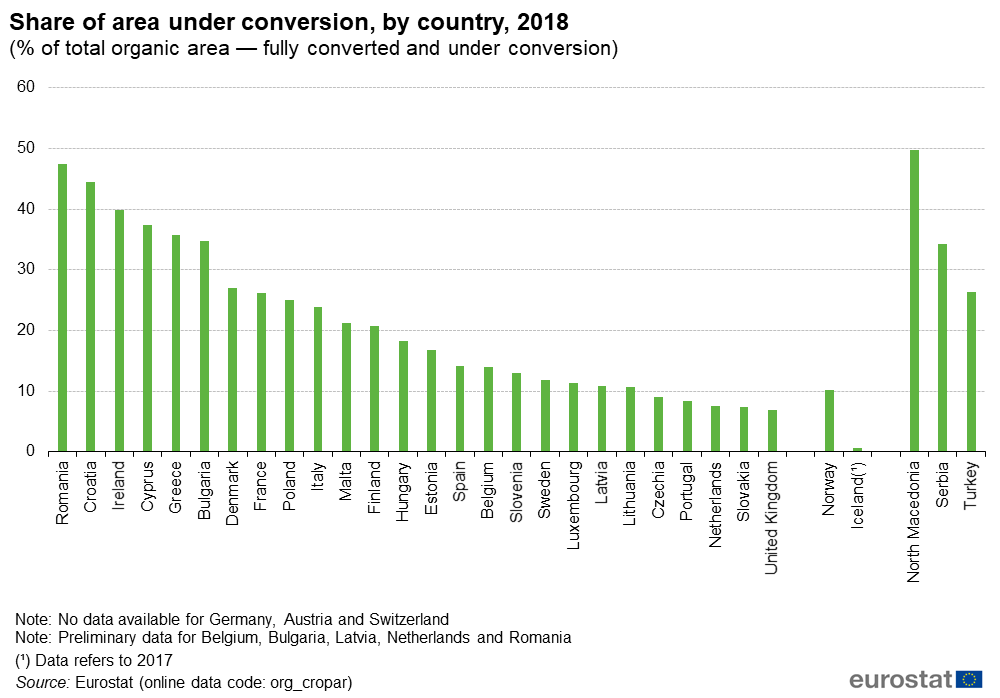 The largest shares of area under conversion in the total organic area were recorded for Romania (47.4 %), Croatia (44.5 %) and Ireland (39.9 %). Romania and Ireland have still only a small share of agricultural land under organic management, below 3 % (Figure 3). Croatia however is close to the EU average with 6.9 % of land under organic management and still shows a positive growth. 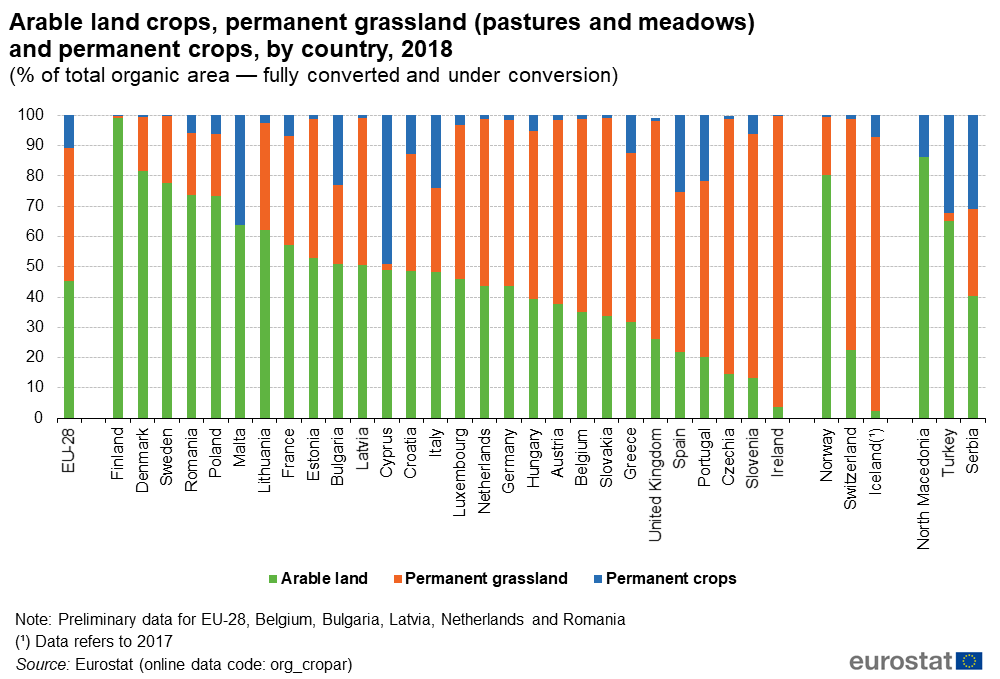 In most EU Member States, permanent crops accounted for the lowest share of these three main land use categories in the organic area (in 15 EU Member States it was less than 5 % of the organic area). In 2018, permanent crops accounted for between 10 % and 20 % in Croatia and Greece, while in Spain, Italy, Bulgaria and Portugal the share was over 20 %. Cyprus and Malta had the highest shares, with 49.2 % and 38.3 % respectively. Olive trees dominated in these two countries.

The 2018 figures for organic livestock as a share in all livestock showed that, with respect to bovines, pigs and sheep, in some EU Member States remarkably large shares of animals were reared using organic methods — bovines and sheep being the most popular species. There were more than 4.6 million organic bovines in the EU out of the 87.4 million bovine animals reported in 2018. 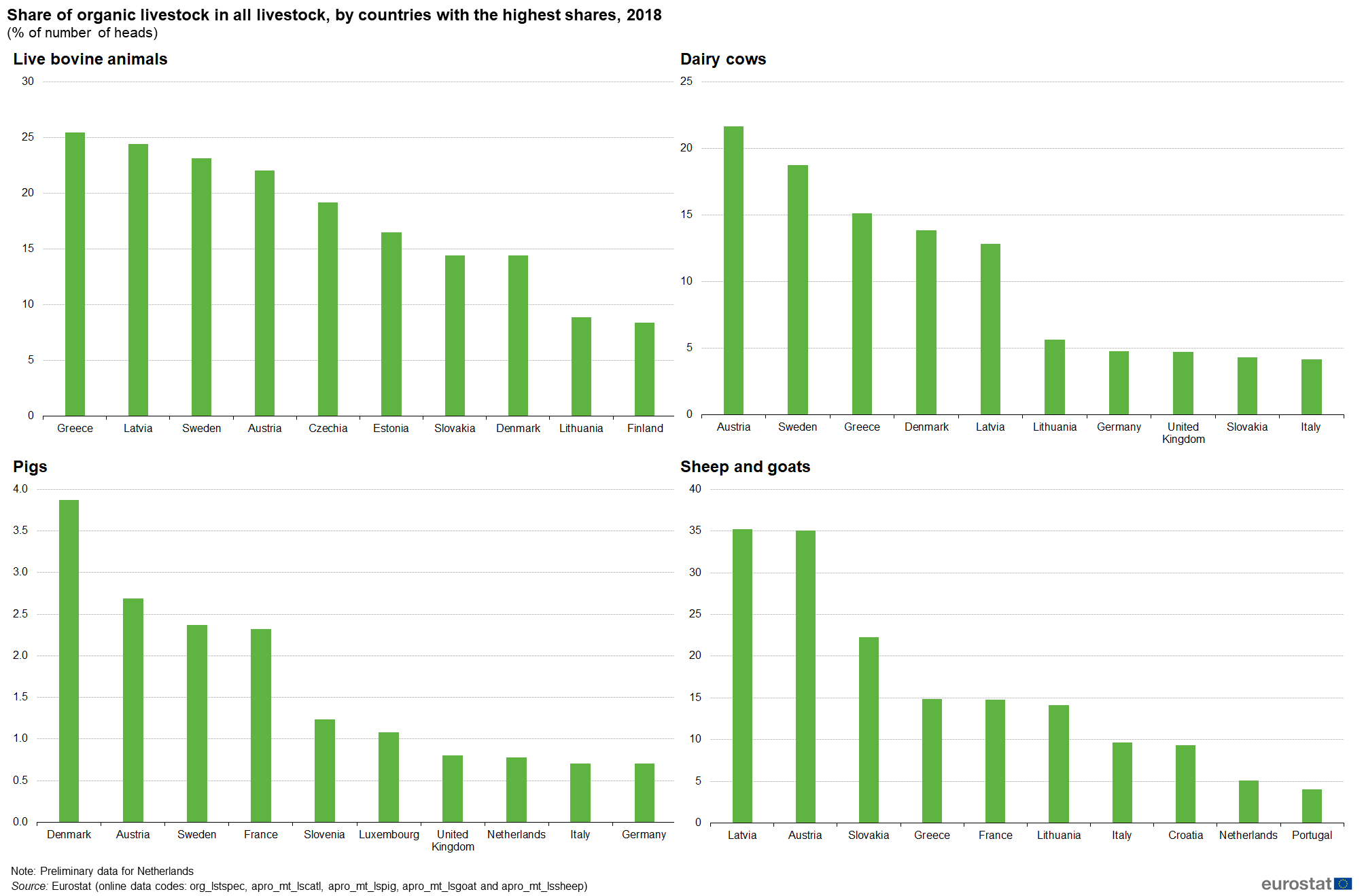 Figure 6: Share of organic livestock in all livestock, by countries with the highest shares, 2018
(% of number of heads)
Source: Eurostat (org_lstspec), (apro_mt_lscatl), (apro_mt_lspig), (apro_mt_lsgoat) and (apro_mt_lssheep)

The annual statistics presented above do not specify on which type of holding the organic area is located. Ideally, the entire holding should be managed in compliance with the requirements that apply to organic production[4]. The reality is different, and there are a significant number of farms with mixed organic and non-organic[5] production in the EU. Data from the Farm structure survey can be used to further describe the situation. The latest available reference year is 2016. 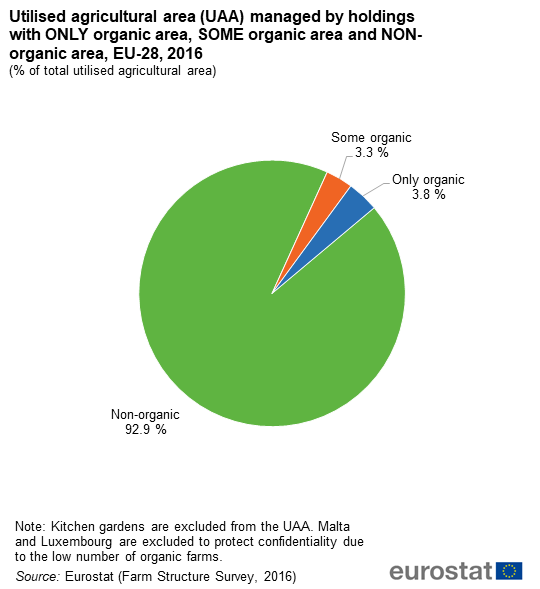 The number of fully organic farms is increasing

Table 2 shows the number of farms with only organic area, some organic area and non-organic area in 2013 and 2016 for the EU Member States, as well as the total UAA[6] and annual work units (AWU) of each of these categories.

At EU level, the number of farms with organic land increased from 2013 to 2016 (Table 2), both for holdings with some organic area by 0.06 percentage points (p.p.) and even more for holdings with only organic land, by 0.4 p.p. The latter represented 2 % of all farms in 2016 and grew by 31 % between 2013 and 2016. It indicates that there is an ongoing process to create fully organic farms. Moreover, the non-organic farms' share of total farms decreased by 0.5 p.p. from 2013 to 2016. The same trend is present in shares of the UAA managed by non-organic farms which decreased by 1.3 p.p., while the UAA of holdings with only organic area increased with 1 p.p. This varied between EU Member States, see further below. 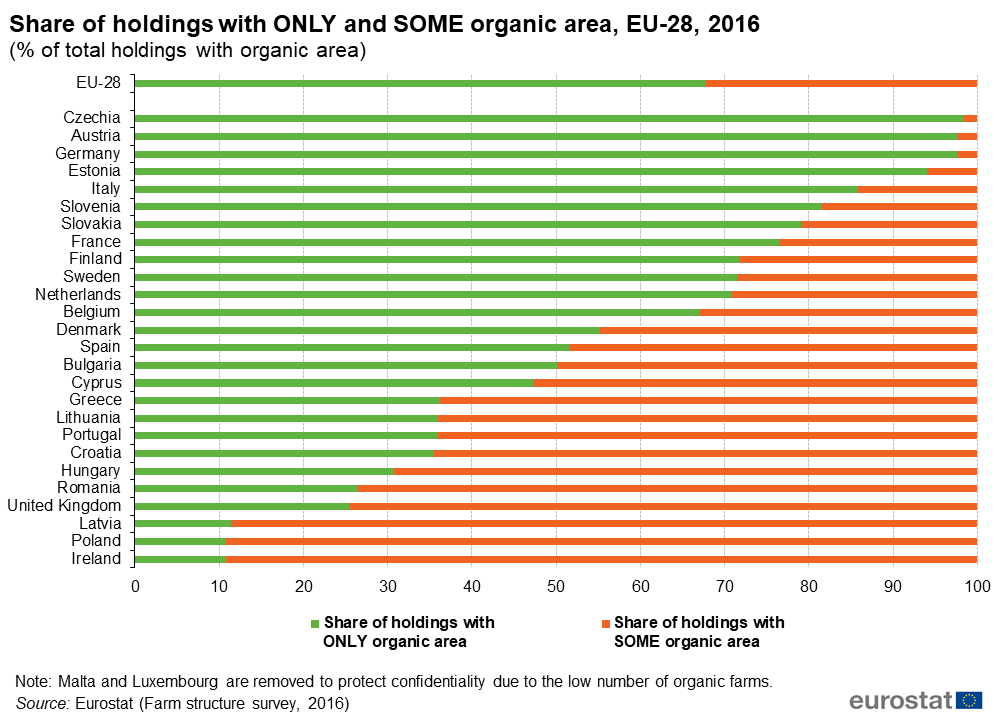 On the farms that have both organic land and other land, the average share of organic area in the total farm area varies from 86.8 % in Finland to 22.0 % in Bulgaria (Figure 9). In 15 EU Member States, the average organic area share on these farms was above 50 %. 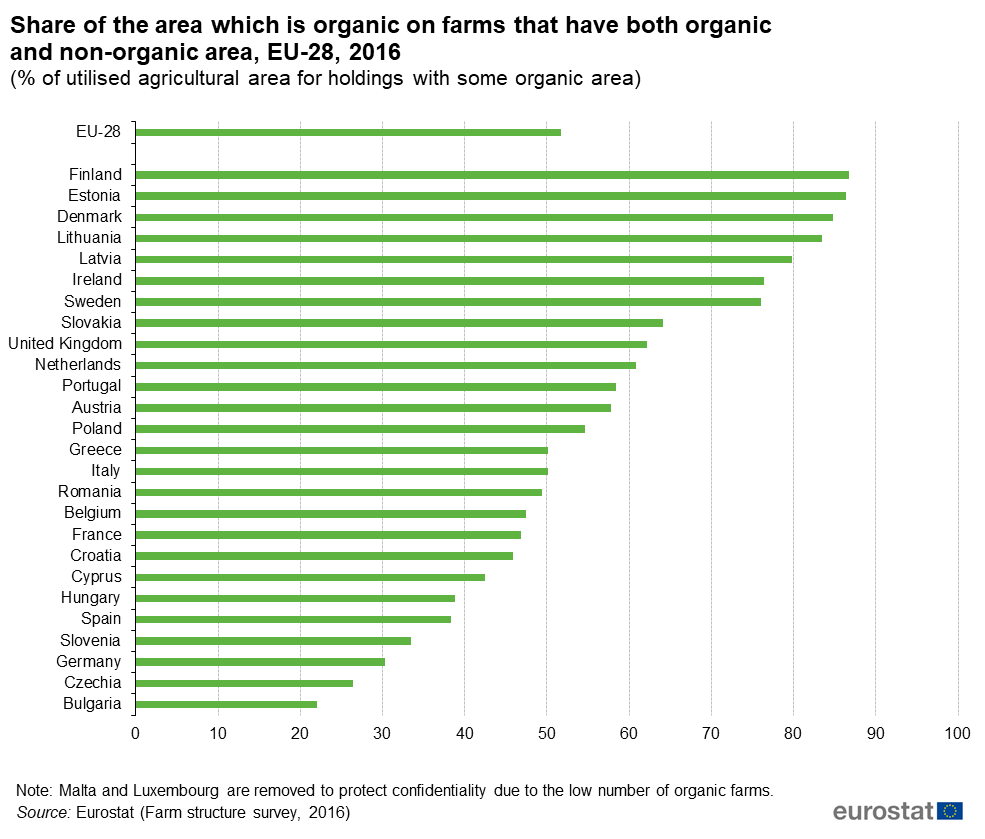 Figure 9: Share of the area which is organic on farms that have both organic and non-organic area, EU-28, 2016
(% of utilised agricultural area for holdings with some organic area)
Source: Eurostat (Farm structure survey, 2016)

The labour force, measured as annual work units (AWU), employed on fully organic farms increased by almost 30 % between 2013 and 2016, from around 193 000 to more than 248 000 (Table 2). It should however be noted that AWU is reported in bands and not in exact figures/hours. It means that on small farms, the AWU may be skewed towards a too high allocation.

The statistical information presented in this publication is drawn from the Eurostat database, available at the Eurostat website. Data used in this article includes unpublished data.

Annual data collection. Data are provided by the EU Member States, Iceland, Norway, Switzerland, Turkey, North Macedonia, Montenegro and Serbia on the basis of a harmonised questionnaire. Data in this annual collection originate from the administrative data of national entities in charge of the certification of operators involved in the organic sector. Up to reference year 2007, data provision was voluntary. From reference year 2008 onwards, data have to be delivered following Commission Regulation (EC) No 889/2008, implementing Council Regulation (EC) No 834/2007.

The Farm structure survey (FSS) is conducted every 10 years (full-scope Agricultural Census) and intermediate surveys (sample-based) in between. Availability of data by year and country can be found here. The statistical unit is the agricultural holding. In the FSS organic data have been collected since the 2000 Census.

Terminology used in this article

The Livestock survey data are used for comparing the organic livestock data with the data on total livestock production. It is an annual data collection. The statistical unit is agricultural holding, in the case of the data used in this article, the reference period is a given day in the month of December.

The annual crop statistics data are used for comparing the organic crop area with the total utilised agriculture area, 'main area' which corresponds to the area of the land parcels. The statistical unit is parcel cultivated for the production of a crop. The reference period used for this article is the final data for 2018.