In 2020, the highest annual price increases in the EU were recorded for alcohol and tobacco (up 2.5 %) and miscellaneous goods and services (up 2.2 %).

Inflation is the increase in the general level of prices of goods and services in an economy; the reverse situation is deflation, when the general level of prices falls. Inflation and deflation are usually measured by consumer price indices or retail price indices. Within the European Union (EU), a specific consumer price index has been developed — the harmonised index of consumer prices (HICP). Other factors (such as wages) being equal, inflation in an economy means that the purchasing power of consumers falls as they are no longer able to purchase the same amount of goods and services with the same amount of money.

The average annual inflation rate of the EU (based on an index using a changing aggregate reflecting EU membership) stayed within the range of 1.2 % to 2.3 % during the period from 1997 (the beginning of the time series) to 2007. In the run-up to the global financial and economic crisis and in its immediate aftermath there was considerable volatility in food and energy price developments which led to broad changes in inflation rates. In the EU, average annual inflation peaked at 3.7 % in 2008 with relatively sharp annual movements during the period 2008-2012. EU inflation subsequently decreased, reaching a low of 0.1 % in 2015 and a slightly higher rate of 0.2 % in 2016. The average annual inflation rate increased to 1.7 % in 2017 and then to 1.9 % in 2018, subsequently decreasing to 1.5 % in 2019 and 0.7 % in 2020. Therefore, the lowest EU inflation rates were recorded during the period 2014-2016, and inflation accelerated from 2017 to 2019, to begin decelerating in 2020 (see Figure 1), impacted by the COVID-19 measures. [1] 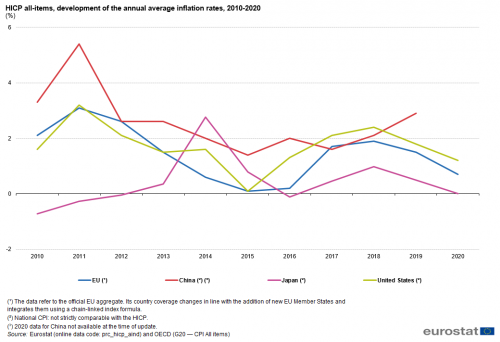 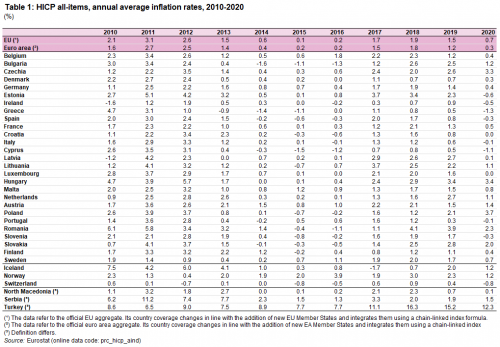 As regards the main components of the HICP, the price of alcoholic beverages and tobacco as well as the price of education rose most rapidly across the EU during the period 2010-2020, 39.2 % and 26.7 %, respectively. By contrast, the price of communications in the EU fell by -10.8 % overall during the same period. There were relatively small changes in the price of clothing and footwear (4.8 %). The price of furnishings, household equipment and routine household maintenance rose by 6.7 % and that of recreation and culture by 8.9 %; all of the remaining main components of the HICP recorded double-digit price increases during this period.

Looking at the latest annual developments (see Figure 2), consumer prices of food and non-alcoholic beverages rose the most in 2020, by an average of 2.5 % in the EU. They were followed by miscellaneous goods and services, which rose by 2.2 %. At the other end of the spectrum, the price of transport fell by -2.3 %; Communications fell by -0.9 % and Housing, water, electricity, gas and other fuels fell by -0.2 % in 2020. 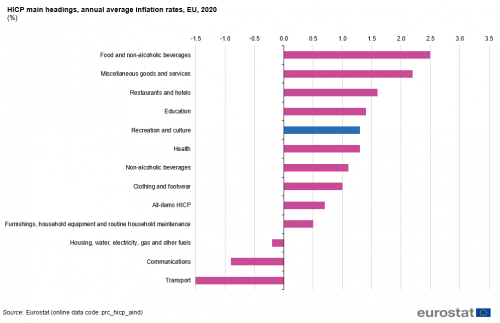 The HICP is an index for measuring, over time, the change in prices of consumer goods and services acquired by households in monetary transactions. Certain categories of consumption expenditure are excluded from the HICP on the grounds that they pose practical problems for price collection, do not represent monetary transactions, or do not yet have a harmonised method of treatment. These include, for example, narcotics, owner-occupied housing and games of chance.

Goods and services are classified according to the European classification of individual consumption by purpose. At the most disaggregated level currently available, Eurostat publishes around 400 sub-indices for consumer prices. The annual inflation rate measures the change of the index between one month and the same month of the previous year, and the monthly rate compares indices between two consecutive months.

The indices are compiled according to a common approach, providing comparable measures of consumer price changes across countries, as well as for different country groupings, namely: the euro area, the European Union, and the European Economic Area (which includes the EU Member States plus Iceland and Norway).

HICPs have a common reference year (currently 2015 = 100). Normally the indices are used to calculate percentage changes that show price increases/decreases. Although the rates of change shown in the tables and figures for this article are annual averages, the basic indices are compiled and published on a monthly basis.

Since October 2001, a flash estimate of the euro area inflation rate has been published at the end of each reference month. This estimate, is nowadays calculated based on data received directly form the euro area countries (nowcasting), and is replaced in the middle of the following month once a full set of data is available.

The HICP is used for measuring inflation in the euro area; the primary objective of the European Central Bank’s (ECB) monetary policy is to maintain price stability. The ECB has defined price stability as a year-on-year increase in the HICP for the euro area of below, but close to 2 % over the medium-term.

HICPs are also used for the purposes of monetary policy and assessing inflation convergence as required in the Treaty on the functioning of the European Union among other uses.