Tweet
In 2021, the highest price level for consumer goods and services among the EU Member States was observed in Denmark (40 % above the EU average) and the lowest in Romania and Bulgaria (44 % below the average).
Tweet
Denmark was the most expensive EU Member State for clothing and footwear in 2021, Bulgaria was the least expensive for alcoholic beverages and tobacco, clothing and footwear.
[[File:Comparative price levels of consumer goods and services June 2022 - dynamic.xlsx]]

This article presents the most recent analysis of price levels for consumer goods and services in the European Union (EU), focusing on price level indices (PLIs), which provide a comparison of countries' price levels relative to the EU average and are calculated using purchasing power parities.

In 2021, price levels for consumer goods and services differed widely across Europe. The highest price level among EU Member States was observed in Denmark, 40 % above the EU average, while in Romania and Bulgaria the price level was 44 % below the EU average.

An understanding of the differences in price levels is important in the comparison of economic data, such as gross domestic product (GDP), because higher relative prices could make an economy look healthier than it really is. Observing price level differences is also important in the analysis of the development of the EU's single market for goods and services.

Table 1 shows the PLIs for four important groups of consumer goods and services (see below for a description of the content of each product group):

These four groups represent on average 19 %, 6 %, 3 % and 1 % of household expenditure, respectively. For reference, the PLIs of total HFCE (those of Figure 1) are also shown. The shaded fields indicate the highest and lowest PLIs per product group among all 36 participating countries. The highest and lowest PLIs among the 27 EU Member States are marked in bold. At the bottom of the table, coefficients of variation are provided for the euro area (EA-19), the current composition of the EU (EU-27) and the group of all 36 countries participating in the programme (All 36).

The highest price dispersion is found for alcoholic beverages and tobacco. This is mainly due to large differences in taxation on these products across the 36 countries. Much less dispersion is observed in the prices of clothing and footwear.

Price dispersion is naturally greatest within the 36 country group, which includes both the high price EFTA countries and the (mostly) low price candidate countries. 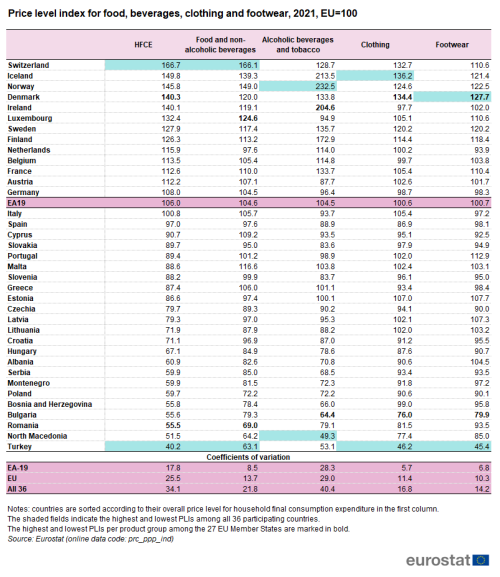 Table 2 shows the PLIs for another four groups of goods and services (see below for a description of the content of these groups):

These groups represent on average 5 %, 2 %, 1 % and 1 % of household final consumption expenditure, respectively.

Price dispersion varies significantly between these four product groups, being most pronounced for electricity, gas and other fuels. Here, Denmark is the most expensive and Turkey the least expensive of all 36 participating countries, while the lowest price level for this category in the EU is reported for Hungary.

For the other three groups shown in this table the price dispersion is much lower – especially for consumer electronics. 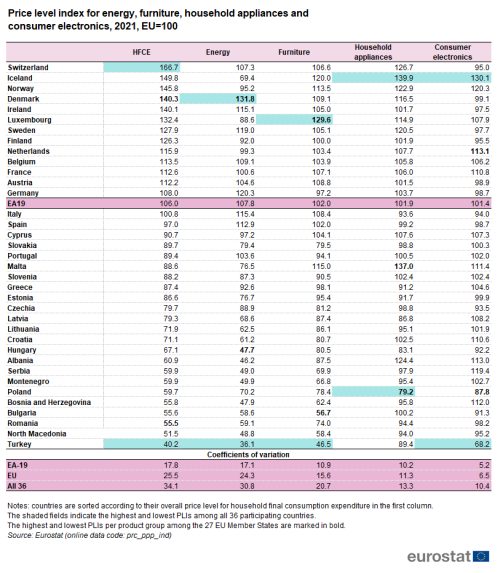 Table 3 shows the PLIs for another four groups of goods and services (see below for a description of the content of these groups):

These groups represent on average 2 %, 2 %, 3 % and 6 % of household final consumption expenditure, respectively.

Price dispersion for personal transport equipment is not very significant. Among all 36 countries, Denmark stands out with a high PLI for this category. This is due to high taxation levels on cars. The lowest price level for this product group was found in Poland.

Price dispersion is significantly higher among the other three service categories (transport services, communication as well as restaurants and hotels). In general, prices for services tend to show larger differences across countries than prices for goods, due to the higher share of labour input into services and the high dispersion of wages across countries.

Concerning transport services, Iceland shows the highest PLI among all countries, while Sweden reports the highest prices among EU Member States. The lowest price level among all countries is observed in Turkey, while Bulgaria is the least expensive EU Member State in this category. Among all 36 countries the highest price level for communication can be found in Norway and the lowest in Romania. Finally, Switzerland stands out with the most expensive restaurants and hotels, while the lowest prices for these services are observed in Turkey. Among the EU Member States, these positions are taken by Denmark and Bulgaria respectively. 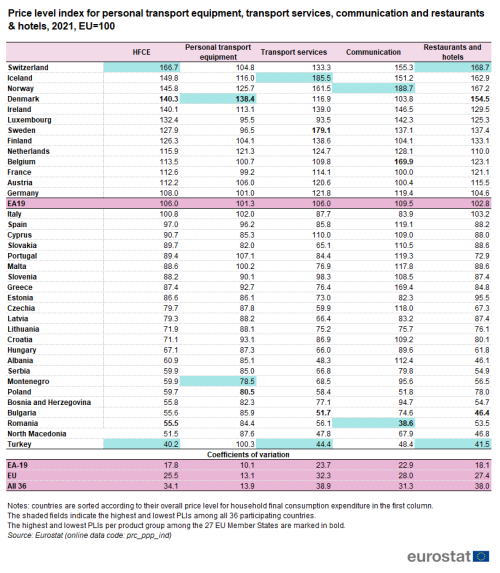 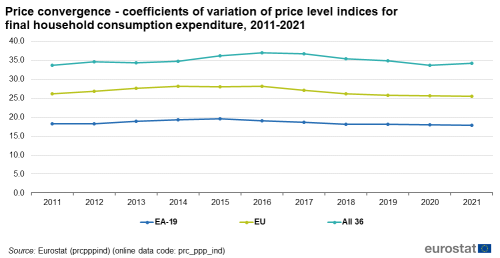 Price level indices are not intended to rank countries strictly. In fact, they only provide an indication of the order of magnitude of the price level in one country in relation to others, particularly when countries are clustered around a very narrow range of outcomes. The degree of uncertainty associated with the basic price data and the methods used for compiling PPPs, may affect in such a case the minor differences between the PLIs and result in differences in ranking which are not statistically or economically significant.

Within the framework of the Eurostat-OECD Purchasing Power Parities (PPP) programme, surveys on prices of household goods and services are carried out cyclically by the National Statistical Institutes (NSIs) of 36 countries. Each survey cycle comprises six surveys, each related to a particular group of household consumption products. As two surveys are carried out per year, the whole survey cycle takes three years to complete, before the next cycle starts.

The PLIs in this article are thus based on price data collected in 2019, 2020 and 2021. The prices collected in 2019 and 2020 have been updated to 2021 using detailed consumer price indices. The PLIs are based on annual national average prices for in total more than 2000 goods and services. The expenditure shares are based on national accounts data for 2021 and represent the average over all participating countries. The national accounts data are also used as weights in the aggregation of detailed PLIs to aggregate PLIs such as for household final consumption expenditure.

The product groups discussed in this article can be broadly described as follows.

Purchasing power parities (PPPs) are indicators of price level differences across countries. PPPs tell us how many currency units a given quantity of goods and services costs in different countries. PPPs can thus be used as currency conversion rates to convert expenditures expressed in national currencies into an artificial common currency, the purchasing power standard (PPS), eliminating the effect of price level differences across countries.

The common rules for the provision of input data, and for the calculation and dissemination of PPPs, are laid down in Regulation (EC) No 1445/2007 of 11 December 2007.