Highlights
Tweet
In 2020, the annual rate of change in the Harmonised Index of Consumer Prices (HIPC) has been on average 0.6 percentage points lower than the HICP at constant tax rates annual rate at euro area level. 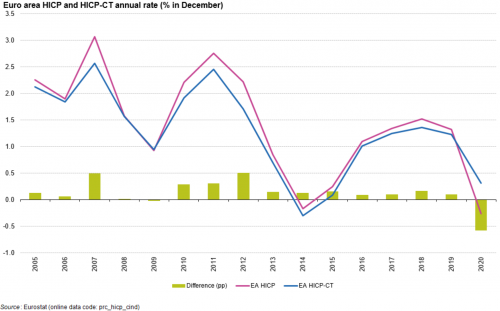 The Harmonised Index of Consumer Prices at constant tax rates (HICP-CT) is a variant of the HICP that measures inflation without the impact of changes in taxes on products, such as value added tax (VAT), excise duties, etc. It thus aims to assess the contribution to inflation of changes in taxes on products. This article analyses HICP-CT data for the European Union (EU) and outlines the methodology underlying these statistics.

Figure 1 shows euro area HICP and HICP-CT December annual rates (% change of the index value in December of the observation year y compared to December of the previous year y-1) from 2005 to 2020. Since HICP-CT is calculated by keeping the tax rates from the previous year’s December constant, in the event of a tax change, the difference between HICP and HICP-CT rates indicates its effect on prices, assuming that the full tax change is passed on to the consumer instantaneously. Consequently, if HICP rates are higher than HICP-CT rates, it would mean that, overall, taxes on products have increased. Conversely, HICP rates that are lower than HICP-CT rates would imply, on average, a decrease in taxes on products (see "Limitations" under section Data sources and availability).

Trends in the euro area

When looking at the period for which HICP-CT data are available (December 2002 onwards) at euro area level, the annual rate of change in the HICP has been on average 0.1 percentage points (pp) higher than the HICP-CT annual rate. That indicates an increase in taxes on products over time. However, there were sub-periods with clearly discernible patterns: there was not much difference between HICP and HICP-CT annual rates until 2009 (with the exception of 2007, mainly due to an increase in the standard VAT rate of Germany from 16 % to 19 %). During 2010-2012, the annual rate of change of the HICP-CT was significantly lower than the general index, and the difference has narrowed since 2013. In 2020, the trend was reversed, with the HICP-CT higher than the HICP for the first time since 2009.

During the period 2011-2020, most Member States recorded an average increase in taxes on products (see Table 1). One exception was Germany, whose HICP and HICP-CT rates have been similar during the last 10 years, except in 2020, when a temporary reduction of the VAT rates was introduced. Another exception was Romania, where the HICP-CT rate was on average 0.4 pp lower than the HICP. The rates of HICP and HICP-CT for Bulgaria, Austria and Slovakia have been similar during the last ten years, while those for Belgium, Denmark, Croatia, and Sweden have exhibited a difference of only 0.1 pp. By contrast, the Netherlands and Romania had the largest differences between HICP and HICP-CT rates at, respectively, 0.4 pp and -0.4pp on average. Looking at individual years, the differences in terms of HICP annual rates being higher than HICP-CT rates were greatest in Spain at 2.1 pp in 2012 and Greece at 1.9 pp in 2015. Conversely, the rare occasions where HICP-CT was higher than HICP by more than 1 pp were recorded in Romania, at 3.0 and 1.9 pp in 2015 and 2016, Germany at 2.1 pp in 2020, and Austria at 1.5 pp, also in 2020. 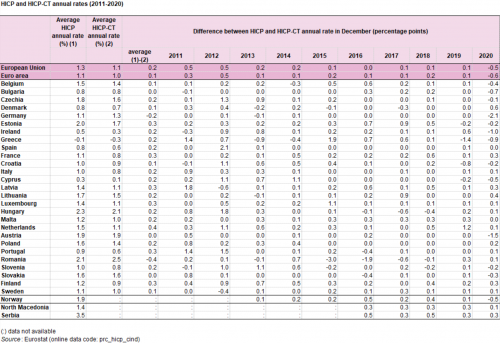 The HICP-CT is defined as an HICP index where tax rates are kept constant in the observation period compared to the reference period, i.e. through time. Hence, in the event of a tax rate change, the difference between the current HICP-CT and HICP theoretically would indicate the effect of the tax rate change on price changes. The tax rate may be a certain percentage of the price, or an absolute tax amount levied on a physical unit.

The HICP-CT is a Laspeyres-type price index which reflects the average change of g item prices pi,t from the price reference period t0 (previous year’s December) to month tn). The expenditure shares are denoted as wi. HICP-CT uses HICP expenditure shares. All product-related taxes, which may be merged in vectors τi,t, are part of the prices observed (and refer to the same periods as the prices). The notation LCTP (Laspeyres-type Constant Tax Price index)

indicates that prices in t0 and tn refer to tax rates from the same period t0. Whereas the prices pi,t0 (τi,t0) are observable in the base period t0, the prices pi,t0 (τi,t0) are not directly observable. They have to be calculated using the reporting period’s purchaser prices pi,t, the product-related tax rates τi,tn as well as the tax rates of the base period τi,t0. For more details on the methodology applied, please refer to HICP-CT manual.

As explained previously, the HICP-CT is useful for analysis only if it is compared with the HICP, e.g. where tax rate changes occur in the observation period, the effect of these changes on prices will be seen by comparing the HICP-CT with the HICP. 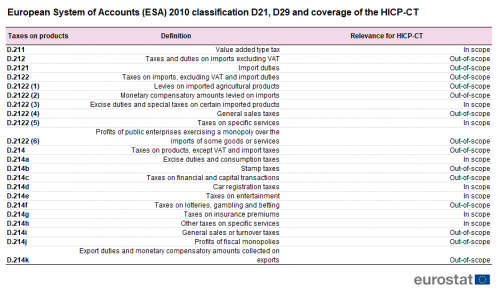 However, some taxes in the scope of the HICP-CT are small in terms of tax revenue and hence a tax rate change would be unlikely to influence the HICP. Therefore only relevant taxes are kept constant for calculating the HICP-CT (for more information, see HICP-CT reference methodology). Limitations

The HICP-CT assumes that changes in tax rates are passed on to the consumer instantaneously and fully. Since most of the time that is not the case, the HICP-CT tends to provide an indication of the upper limit of the impact of tax changes on inflation. In real life, taxes are not always passed on to consumers at the same time as they are introduced. Retailers can adjust the prices of their products to reflect tax changes later on or they can anticipate the rate change and adjust their prices before the new tax rate is applied. It is also possible that retailers will change their prices less than expected or even keep prices constant. Thus the HICP-CT might overestimate a price increase, e.g. if stock is sold at the ‘old’ price.

The price elasticity[1] of supply and demand determines to some extent how taxes will influence prices. The less price-elastic the demand, the bigger the share of tax that consumers have to pay. In the case of more price-elastic demand, the retailers have to bear a bigger part of the tax burden (see Figure 2a).

Hence, the assumption that changes in tax rates are passed on to the consumer fully is true only in the case of perfectly inelastic demand, while in other cases the burden of the tax rate change is shared between consumer and retailer (see Figure 2b).

As depicted in Figure 2, whenever a tax rate changes, the supply curve shifts upwards (or downwards, depending on whether the change is positive or negative) by the distance equal to the difference between the new and old tax rates (τ2 - τ1), assuming that changes in tax rates are passed on instantaneously and fully. There is then a new equilibrium point with a price p2 and a quantity q2. Only in the case of perfectly inelastic demand is the consumer’s tax incidence equal to the tax rate change, i.e., p1 equals p3. In other cases, although the HICP-CT records the price p3, the actual price with constant taxes would be p1 (ceteris paribus: assuming there are no other changes). Since cases of perfectly inelastic demand are rare in real life, generally the HICP-CT just gives an indication of an upper limit of the changing tax rate’s influence on inflation.

In case the change of taxes creates second round effects, that effect is not captured by the HICP-CT. Additionally, changes to indirect tax policy that affect the base of the tax and not the rate are not covered by HICP-CT.

Therefore, the HICP-CT is an important tool for analysing the causes of inflation, but it cannot be used as an accurate assessment of the impact of tax policy changes on consumer prices.