This article is part of Statistics 4 beginners, a section in Statistics Explained where statistical indicators and concepts are explained in an simple way to make the world of statistics a bit easier both for pupils and students as well as for all those with an interest in statistics.

Why is information about the number of people living in a country, a region or a town needed? Governments, for example, need to know how many inhabitants currently live in the country and how many there will be in the future. From this they can plan and make better decisions regarding the construction of schools, hospitals, roads etc. Governments also need to know how old the population is and will be in the coming years in order to plan for pensions, health care etc. 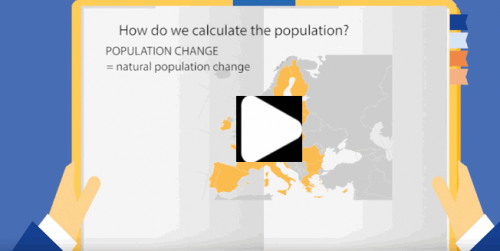 How is the population in a country or given area calculated?

What other important indicators about the population are used?

The fertility rate is the average number of children born alive to a woman taking into consideration current fertility rates. The definition of a birth is the start of life when a child emerges from the body of its mother. The crude birth rate is defined as the number of births during the year divided by the population in that year; the value is expressed per 1 000 persons.

How long is a person expected to live? This is measured through the indicator life expectancy. It can be expressed as the life expectancy at birth, which is the number of years a new-born baby can expect to live. The calculation of life expectancy takes into account the mortality conditions today; resulting in how likely it currently is to die at each age. The life expectancy is normally calculated for the total population and also separately for women and men. Life expectancy for women is generally higher than for men.

A population pyramid is a graphical illustration which helps to visualise the number of persons by age group for a certain year; it can look like this:

See the animation above and the text below for an explanation
The oldest age group is on top, the youngest at the bottom; men are usually on the left side, women on the right. In the illustration above, 2001 (with a border) and 2015 (solid colours) are compared. We can see that in 2015, the age group with the highest share of the population was those aged 45-49, while in 2001 it was the age groups 30-34 and 35-39. From the shape of the pyramid, we can see that the population is getting older as the younger age groups are decreasing and the older ones increasing. This can also be illustrated by the median age of the population: in 2015 it was 42.4 years, while in 2001 it was 38.3 years.

Back to Statistics 4 beginners - Introduction