Among candidate countries and potential candidates, the highest shares of young people were in Kosovo and Turkey while the lowest was in Serbia.

Serbia and Bosnia and Herzegovina were the only candidate countries and potential candidates to record crude birth rates that were lower than in the EU-27.

This article is part of an online publication and provides information on a range of population statistics for the European Union (EU) enlargement countries, in other words the candidate countries and potential candidates. Montenegro, North Macedonia, Albania, Serbia and Turkey currently have candidate status, while Bosnia and Herzegovina and Kosovo* are potential candidates.

The article gives an overview of demographic developments in the candidate countries and potential candidates, presenting indicators such as the overall number of inhabitants, crude birth and death rates, fertility rates, life expectancy and the infant mortality rate.

The development of the number of inhabitants within the candidate countries and potential candidates followed a varied pattern during the period 2009-2019. The population of Turkey increased at a relatively rapid pace, growing by 14.7 % overall during the period under consideration, while the number of inhabitants in North Macedonia and Montenegro grew at a modest pace, increasing by 1.4 % and 0.8 % respectively; this was similar to but slightly slower than the corresponding rate of change in the EU-27 where the population grew by 1.5 % overall. Elsewhere there were relatively large declines in the populations of the candidate countries and potential candidates: down 2.5 % in Albania, 5.1 % in Serbia (note that there is a break in series), 8.9 % in Bosnia and Herzegovina, and 17.7 % in Kosovo (note again that there are breaks in the times series, with little overall change since the break). 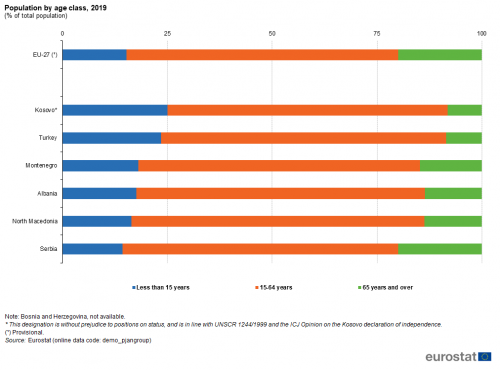 Crude birth rates higher than crude death rates in most candidate countries and potential candidates, although not in Serbia or in Bosnia and Herzegovina

The crude rate of natural increase is calculated by subtracting the crude death rate from the crude birth rate: a positive result implies that the natural rate of population change (in other words, excluding the effects of migrant flows) is positive and so the population increases. For some time the crude birth rate was slightly higher than the crude death rate in the EU-27, resulting in a modest level of natural population increase, although since 2012 this has not been the case. The difference between these two rates in 2018 was slightly negative, as the birth rate was 1.0 per 1 000 inhabitants lower than the death rate.

Among the candidate countries and potential candidates, differences between these two rates were wider — see Table 2; this was particularly the case in Kosovo and Turkey, where the highest rates of natural population growth were recorded (10.3 and 10.1 per 1 000 inhabitants). By contrast, Serbia as well as Bosnia and Herzegovina reported crude death rates that were higher than their crude birth rates, resulting therefore in a negative rate of natural population change. In Serbia and in Bosnia and Herzegovina, comparing the latest difference with 5 and 10 years earlier, the negative rates of natural population change had intensified.

Life expectancy at birth for women is higher than for men both within the EU-27 and across all of the candidate countries and potential candidates for which data are available (see Table 4). This gender gap was highest at 5.7 years in Kosovo in 2016 and 5.4 years in Turkey in 2018, around the EU-27 average of 5.5 years. Across the remaining candidate countries and potential candidates (no data for Bosnia and Herzegovina), life expectancy at birth for women in 2018 was between 3.1 years and 4.9 years more than it was for men.

There was an increase in life expectancy between 2008 and 2018 both for men and for women in the EU-27 and in the three candidate countries and potential candidates for which a complete time series is available: Montenegro, North Macedonia and Serbia. Equally there were increases in Turkey between 2010 and 2018 and in Albania between 2014 and 2018.

Rapid fall in the infant mortality rate in Montenegro

Infant mortality rates fell at a rapid pace in several of the candidate countries and potential candidates in recent years (see Table 5), in particular (in relative terms) in Montenegro, Turkey and Serbia; only in Albania did the rate increase. In 2017, the infant mortality rate in Kosovo was 2.8 times as high as in the EU-27 (where the rate was 3.5 deaths per 1 000 live births), while in North Macedonia and Turkey it was 2.6 times as high and in Albania it was 2.3 times as high. The latest rate in Serbia was 1.3 times the EU-27 average while that in Montenegro (at 1.3 deaths per 1 000 live births in 2017) was less than half the EU-27 average.

Data for the enlargement countries are collected for a wide range of indicators each year through a questionnaire that is sent by Eurostat to candidate countries or potential candidates. A network of contacts has been established for updating these questionnaires, generally within the national statistical offices, but potentially including representatives of other data-producing organisations (for example, central banks or government ministries). The statistics collected in this annual exercise are available free-of-charge on Eurostat’s website, together with a wide range of other socio-economic indicators collected as part of this initiative. Note that in 2016, it was decided to stop collecting most population statistics using the questionnaires, instead relying on information that was collected by Eurostat’s unit responsible for population and migration statistics. Alongside Eurostat’s regular collection of population data from EU Member States and EFTA countries, the enlargement countries provide population data directly to Eurostat and these data have been used in this article. These statistics are also available free-of-charge on Eurostat’s website.

Eurostat provides a wide range of demographic data, including statistics on populations at national and regional level, as well as for various demographic factors influencing the size, the structure and the specific characteristics of these populations. In its demography data collection exercise, Eurostat collects data in relation to the population as of 1 January each year. The recommended definition is the ‘usual resident population’ and represents the number of inhabitants of a given area on 1 January of the year in question (or, in some cases, on 31 December of the previous year).

Fertility is the ability to conceive (become pregnant) and give birth to children. The total fertility rate is defined as the mean number of children who would be born to a woman during her lifetime, if she were to spend her childbearing years conforming to the age-specific fertility rates that have been measured in a given year.

Life expectancy at a certain age is the mean additional number of years that a person of that age can expect to live, if subjected throughout the rest of his or her life to the current mortality conditions.

Life expectancy at birth rose rapidly during the last century in the EU due to a number of factors, including reductions in infant mortality, rising living standards, improved lifestyles and better education, as well as advances in healthcare and medicine. Statistics on population change and the structure of population are increasingly used to support policymaking and provide an opportunity to monitor demographic behaviour within an economic, social and cultural context.

Indeed, the EU’s population is ageing as consistently low birth rates and higher life expectancy transform the shape of its age pyramid. As a result, the proportion of people of working age in the EU-27 is shrinking while the relative number of those retired is expanding. This will, in turn, lead to an increased burden on those of working age to provide for the social expenditure required by the ageing population for a range of services.

Eurostat has the responsibility to ensure that statistical production of the enlargement countries complies with the EU acquis in the field of statistics. To do so, Eurostat supports the national statistical offices and other producers of official statistics through a range of initiatives, such as pilot surveys, training courses, traineeships, study visits, workshops and seminars, and participation in meetings within the European Statistical System (ESS). The ultimate goal is the provision of harmonised, high-quality data that conforms to European and international standards.