Highlights
Tweet
7.5 million (0.8 %) more nights were spent in hotels and similar accommodation of the EU in the summer season 2018 compared with 2017.
Tweet
Spain, Italy and Greece were the most popular EU destinations for people travelling outside their own country in summer 2018.
Tweet
Compared with the same period in 2017, the net occupancy rates of bed places in the European Union increased by 0.8 % during the 2018 summer season, ranging from 31.4 % in Luxembourg, to 97.3 % in Croatia.
[[File:Tourism statistics - summer season occupancy - March 2019.xlsx]]

Percentage change in number of nights spent at hotels and similar accommodation establishments, June-September 2018 compared with the same period in 2017

This article analyses the tourism trends of the 2018 summer season (June to September) in the European Union (EU) Member States, candidate and EFTA countries. Tourism recorded positive growth rates in most countries, compared with the same period in 2017. This trend is confirmed both by the number of nights spent at hotels and similar accommodation establishments, and by their net occupancy rates.

Comparing the monthly figures for the 2018 summer season with the previous year, 7.5 million more nights (+0.8 %) were spent in hotels and similar accommodation in the European Union. Positive growth rates were recorded in 19 out of 27 Member States where data is available. The highest increase was observed in Latvia (+8.1 %) followed by Lithuania (+7.6 %), while Ireland, Luxembourg, Portugal, the United Kingdom, Spain, Austria, Finland and Croatia reported decreases (see Figure 1). 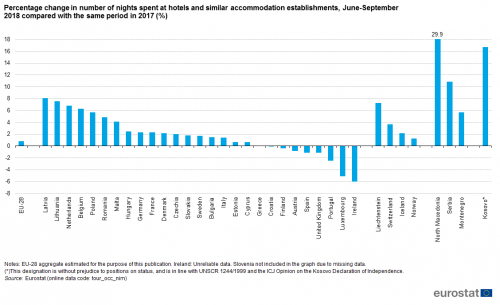 The most popular destinations for non-residents were Spain, Italy and Greece, together accounting for nearly half of all nights spent by non-residents in the EU-28 in summer 2018<newarticle>(see Table 1). 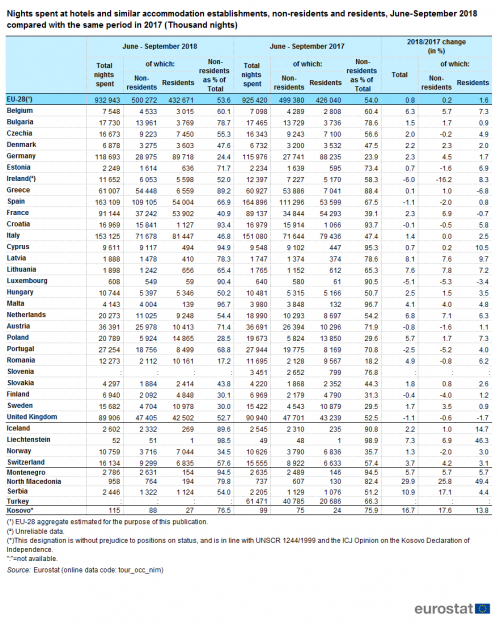 Nights spent by residents and non-residents

In the European Union, the number of nights spent by non-residents at hotels and similar accommodation increased by 0.2 % in summer 2018 compared with the same period of 2017. Positive growths were observed in most Member States where data is available, while Lithuania, Latvia and the Netherlands reported increases above 7 %. However drops were recorded in 11 Member States (see Table 1).

In terms of nights spent by residents staying at hotels and similar accommodation, domestic tourism increased during the 2018 summer season in all Member States where data is available with the exception of Greece (-6.8 %), Luxembourg (-3.4 %), the United Kingdom (-1.7 %) and France (-0.7 %).

Compared with the same period of the previous year, net occupancy rates of bed places in the European Union increased by 0.8 percentage points during the 2018 summer season. These rates ranged from 31.4 % in Luxembourg (August), to 97.3 % in Croatia (August) (see Table 2). 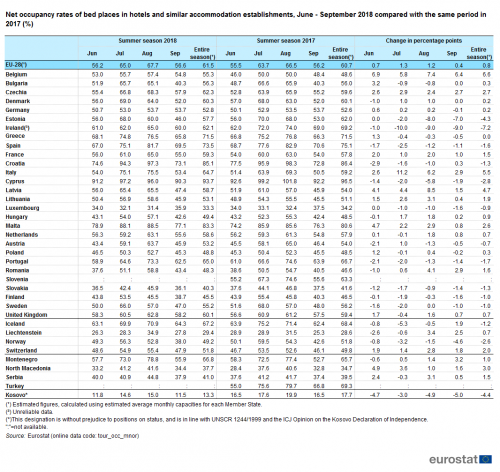 August was the month with the highest occupancy rates for most Member States. In Bulgaria, Denmark, Estonia, Cyprus, Finland and Sweden the peak month was July, while in Luxembourg it was September. With more than nine out of ten available bed places having been in use, Croatia and Cyprus were the EU countries with the highest net occupancy rates during their peak summer month (see Figure 2). 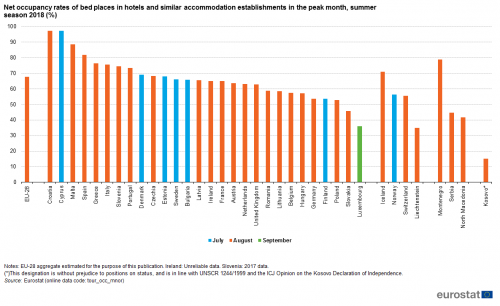 Figure 3 shows the occupancy rates in the 2018 summer season compared with the estimated occupancy rates in the entire year 2018. The differences between these two figures for each country can be less significant than one would expect on the basis of the seasonality of nights spent (see article Seasonality in the tourist accommodation sector). This can be partly explained by the fact that the net occupancy only takes into account available bed places, in other words some rooms that may be closed during the lower season do not affect the occupancy rate downwards. 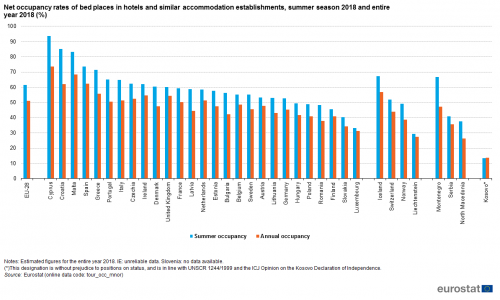 With 2012 as reference year