Seasonality in the tourist accommodation sector

July and August accounted for 42 % of all annual nights spent in EU tourist accommodation in 2020.

Monthly distribution of the total number of nights spent in tourist accommodation establishments by type of accommodation, EU, 2020 (% in the entire year)

This analysis from the point of view of the supply side complements another article on seasonality in tourism demand in which the seasonal bias in tourism trips of Europeans is discussed.

Seasonality has always had a big impact on tourism. Leading factors are environmental (such as climate conditions or geographical location) together with social and cultural factors (such as school holidays). The year 2020 however, was exceptional for the tourism industry, being one of the most affected sectors in the Covid-19 crisis. 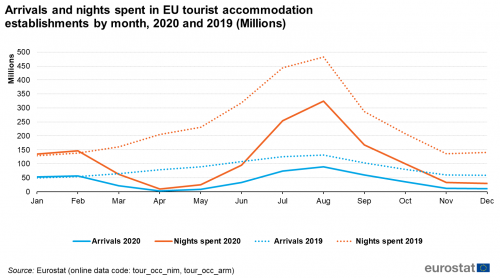 The usual shoulder season of the 2nd quarter (April to June) was extremely calm in 2020 due to the outbreak of the pandemic in March, the lockdown imposed in most EU countries in April and the travel restrictions all around the world. Less than 3 % of all tourism nights in 2020 were spent during April and May, while the share of these two months was around 15 % the previous years.

The number of arrivals was slightly more evenly spread over the year than the number of nights spent, mainly due to the concentration of longer stays in July and August.

Figure 2 shows the effect of the pandemic in 2020 and the normal fluctuations due to seasonality as this was in 2019. January and February, the months before the outbreak, were relatively normal (see Figure 1) but turned out to account for more than 20% of the annual nights spent due to the impact of the pandemic on the other ten months of the year. The near absence of tourism flows in spring shifted the distribution towards the summer months. 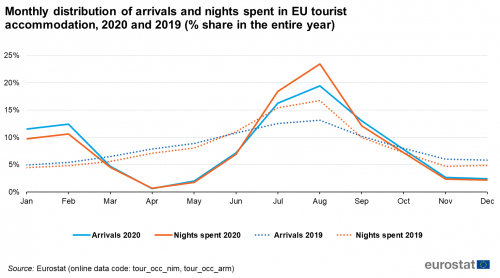 In 2020, due to Covid-19, seasonality in tourism increased in all EU Member States

The overall situation at EU level shown in Figure 1 aggregates data from countries with a very different seasonal profile. For each country, the monthly share in the annual number of nights spent in tourist accommodation is listed in Table 1. 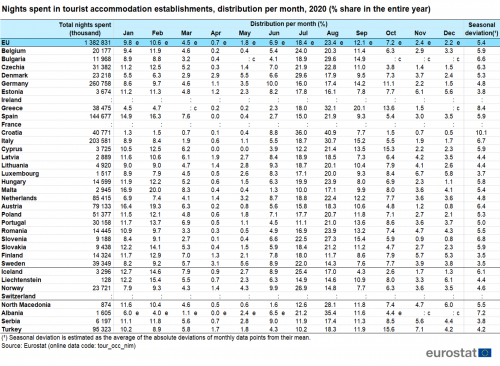 The seasonal deviation in 2020 was observed in Croatia and Greece with 10.1 and 8.4 respectively, followed by Slovenia, Italy and Bulgaria (all above 6.5), as well as Albania with 7.2 (see Figure 3). In these six countries, the peak month was August with the highest shares of nights spent, ranging between 27 % in Slovenia to 41 % in Croatia. 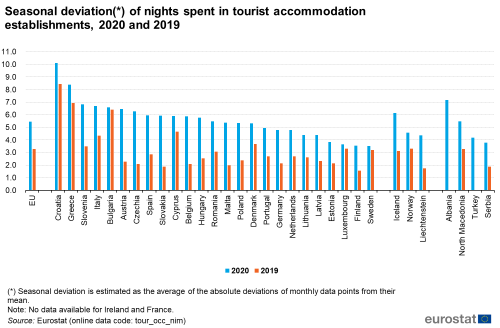 Each year, a particular phenomenon leading to lower seasonality is observed in the Alpine countries Austria, Liechtenstein and Switzerland. When looking at the months with a share above the expected share, if the distribution were even (i.e. each month has a share of 8.3 % — or 1/12th of the annual total), these countries appeared to have higher figures in two separate periods of the year. In addition to a peak season during the summer months, these countries had a second peak season during the winter months. In 2020, due to the exceptional impact of the pandemic on seasonality in tourism, this phenomenon was also observed in other countries (such as Belgium, Spain, Malta or Portugal). The share of nights spent before the outbreak of the pandemic, in January and February 2020, increased due to the huge drop in the number of nights spent during the months that followed. This led to a first peak in those winter months, followed by a second peak in the summer months. 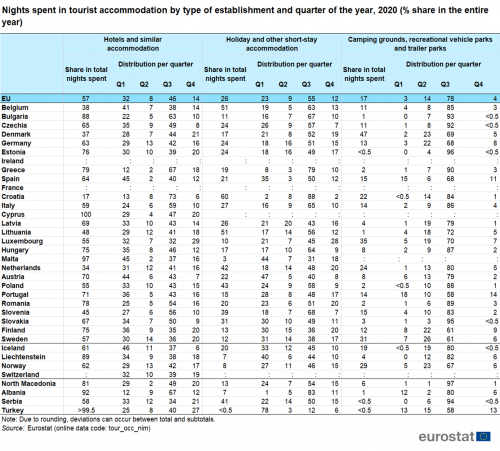 Table 2: Nights spent in tourist accommodation by type of establishment and quarter of the year, 2020
(% share in the entire year)
Source: Eurostat (tour_occ_nim) 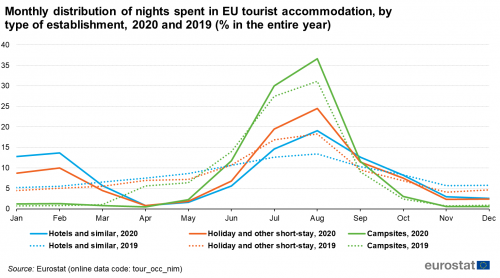 Figure 4: Monthly distribution of nights spent in EU tourist accommodation, by type of establishment, 2020 and 2019
(% in the entire year)
Source: Eurostat (tour_occ_nim)

In seven countries, hotels had to rely on the third quarter for more than half of their overnight stays: Croatia (73 %), Greece (67 %), Bulgaria (63 %), Italy (59 %), Slovenia (56 %) and Romania (54 %) as well as Albania (67 %). The exceptional double peak pattern is also reflected in Table 2. In Belgium, Spain, Malta and Austria, as well as Iceland, the number of nights spent in hotels during the first quarter, outnumbered the traditional peak quarter, the third quarter.

Establishments active in other segments of the accommodation sector had a much higher peak in the period July to September. In Croatia, Greece, Slovenia and Bulgaria, as well as Albania, more than two out of three overnights in holiday and other short stay accommodation were in the third quarter. In Estonia, Slovakia, Bulgaria and Czechia, as well as in north Macedonia and Serbia, more than nine out of ten overnight stays in campsites were in the third quarter.

The monthly distribution broken down by type of accommodation (see Figure 3) indicates that the summer peak is partly related to higher seasonality for accommodation other than hotels and similar establishments, mainly campsites, which depend much more on the weather (and are often closed in winter).

In August 2020, seven out of ten nights in EU tourist accommodation were spent by domestic tourists

In the course of March 2020, tourists stopped travelling abroad due to Covid-19 related restrictions and even when borders started opening again in April, international tourists had to stay in a quarantine in many countries. Compared with 2019, nights spent by international guests fell by 68 % while the drop for Domestic guests was 37 %.

Figure 5 shows the impact of the pandemic on tourist behaviour. Domestic travellers appeared to be the main contributors to the summer peak in nights spent in EU tourist accommodation. Although August was the peak month for both domestic and international nights spent, international tourists spent less than three out of ten (29 %) of the total overnights in August, while this share was 46 % in 2019. 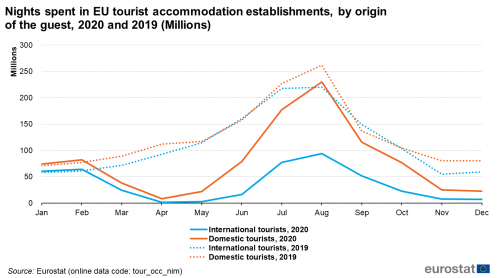 Seasonality of the turnover in accommodation correlates well with the occupancy

Short-term business statistics provide monthly and quarterly indices for the sector of short-stay accommodation for visitors and other travellers (NACE division I55).

Figure 6 shows the average monthly evolution of the nights spent in the EU tourist accommodation establishments (NACE classes I55.1, I55.2 and I55.3) and the calendar adjusted turnover for the EU accommodation sector (NACE division I55 – note that this also includes the very small NACE class I55.9). The seasonality of the nights spent was more pronounced than that of the turnover, which could partly be explained by the fact that during the peak season – often overlapping with school holidays – the occupancy of bed places will be relatively higher than the bedroom occupancy as compared to the low season (e.g. families versus business travellers). The determining factor for the turnover will rather be the number of rooms rented out, which does not fluctuate as much, than the number of bed places used. 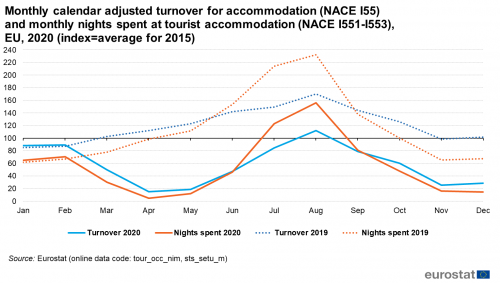 Using data from the European Labour force survey, Figure 7 indicates that there was a much stronger seasonal bias in the accommodation sector than in the entire HORECA (hotel, restaurant and catering) sector. In the economy as a whole, seasonal fluctuations were very limited, but this aggregate figure hides of course strong seasonal variations in certain branches of the economy. 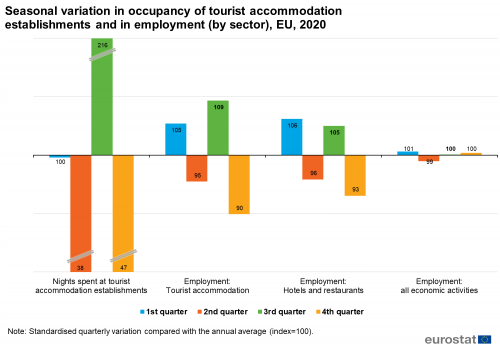 Statistics on the demand for tourism look at participation, i.e. the number of residents that make at least one trip of at least one overnight stay during the reference period. They also look at the number of tourism trips made (and the number of nights spent on those trips), broken down by tourism-related variables such as country of destination, month of departure, length of stay, type of organisation of the trip, mode of transport, type of accommodation or expenditure, and by socio-demographic variables, such as age or gender.

In June 2010, the European Commission released a Communication entitled "Europe, the world's No 1 tourist destination - a new political framework for tourism in Europe". One of the challenges and opportunities facing the European tourism industry is the seasonal distribution of demand for tourism. Better use of existing tourist infrastructure and staff in the low season could help businesses improve their productivity and benefit from a more stable and motivated workforce. Extending the tourism season or spreading tourism activities more evenly throughout the year can significantly boost the sustainability and competitiveness of European tourist destinations.