Nights spent in EU tourist accommodation in March 2022: more than three times up compared with March 2021.

This article focuses on the short-term evolutions in the nights spent in tourist accommodation in the European Union (EU). The data from the most recent reference quarter available (January to March 2022) are compared with those of the same period of the previous year. Due to the impact of the Covid-19 pandemic which started in March 2020, the number of nights spent during the 1st quarter of 2021 was already down compared with the same period in 2019. To have a more accurate picture of 2022 monthly data, this is mainly compared with the pre-Covid 2019 respective periods.

Furthermore, the article includes estimates for the entire year 2021. In order to further evaluate the Covid-19 impact on the tourism sector, this update includes one more chapter presenting some results of an ad hoc data collection on monthly nights spent in tourist accommodation in 2021, broken down by origin of the guest.

March 2022: The number of nights spent in EU tourist accommodation more than tripled compared with March 2021

In March 2022, 131.1 million nights were spent in EU tourist accommodation (see Table 1). This corresponds to 93 million more nights (+247 %) than those spent in March 2021. All EU countries with available data reported positive trends. Compared, however, with March 2019 - before the start of the pandemic- the number of nights spent in March 2022 was lower by 19 %, while Denmark was the only EU country having recorded an increase (+11 %) . 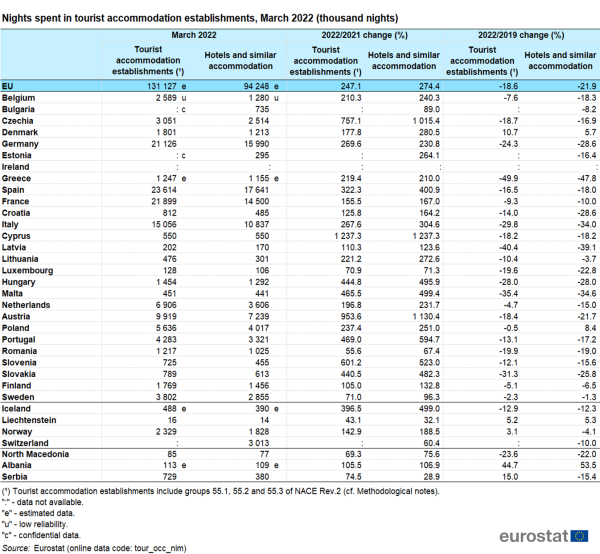 Looking at the breakdown by origin of the guest, in March 2022 compared with March 2019, Europeans spent 11 % fewer nights in their own country tourist accommodation (domestic guests). In 11 out of the 24 EU countries with available data, however, domestic nights increased compared with the pre-covid March 2019 (see Figure 1). Denmark reported the biggest increase (+24 %), followed by Slovenia (+19 %), while Cyprus and Greece reported the biggest drops (respectively, -53 % and -48 %).

The recovery of international tourism was slower than for domestic tourism. In March 2022 compared with the same month in 2019, 28 % fewer nights were spent by international guests in EU tourist accommodation. This trend was reflected in all Member states' data, ranging from -7 % in Poland to -61 % in Latvia. 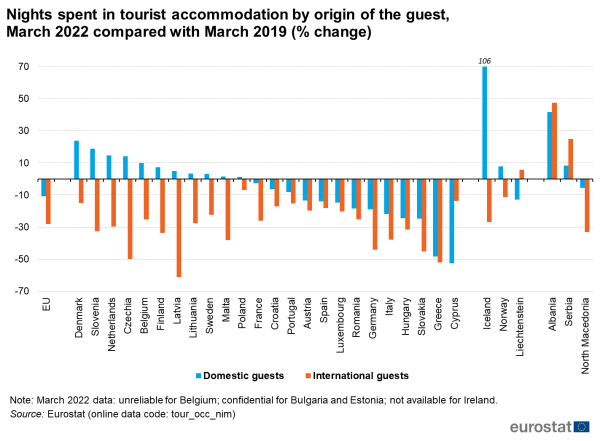 Table 2 looks at the most recent quarter available, the first quarter of 2022, broken down by origin of the guest. From January to March 2022, the number of nights spent in EU tourist accommodation increased by 225 % compared with the same period in 2021 and reached 327 million, which corresponds to 76 % of the nights spent during the same pre-covid period (January to March 2019).

Looking at the origin of the guest, in the first quarter of 2022, nights spent by international guests at EU tourist accommodation remained lower than those spent in 2019 (-35 %). Although all EU Member states with available data reported increases compared with 2021, these figures did not reach 2019 levels (see Figure 2). International nights spent during this period in Latvia, Greece, Germany, Slovakia and Czechia did not reach half of those spent in the same quarter in 2019. 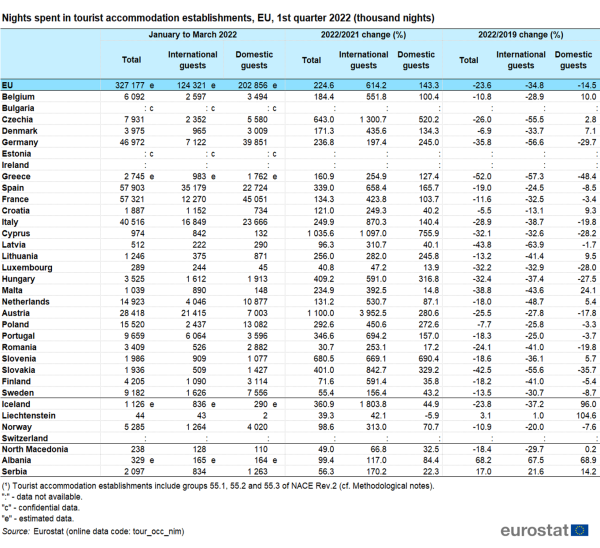 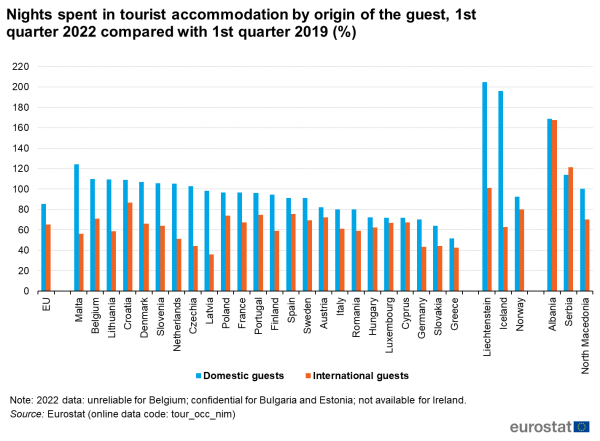 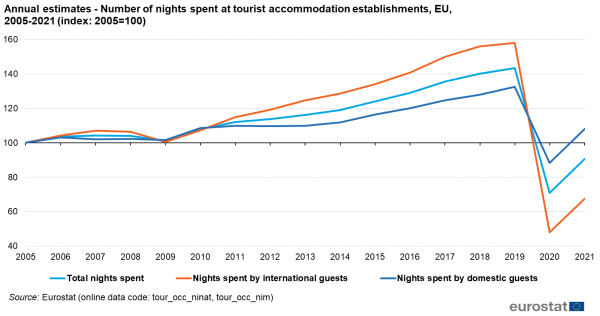 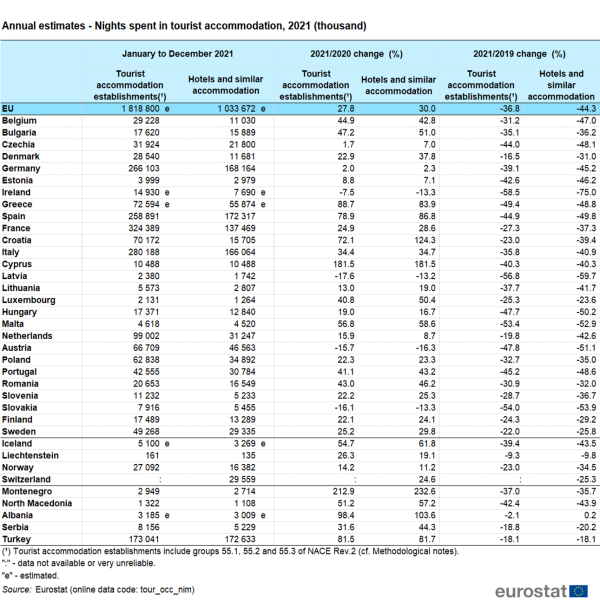 The increase at EU level reflected positive trends in 23 out of the 27 Member states. Only Latvia, Slovakia, Austria and Ireland registered drops, while Cyprus, Greece, Spain and Croatia reported the highest increases of more than 70 % compared with 2020. Comparing, however, with the pre-Covid 2019 figures, a drop of 37 % was registered at EU level while Ireland, Latvia, Slovakia and Malta were the most affected countries, reaching less than half of 2019 levels. On the other hand, Denmark and the Netherlands registered the lowest drops of less than 20 % (see Figure 4). 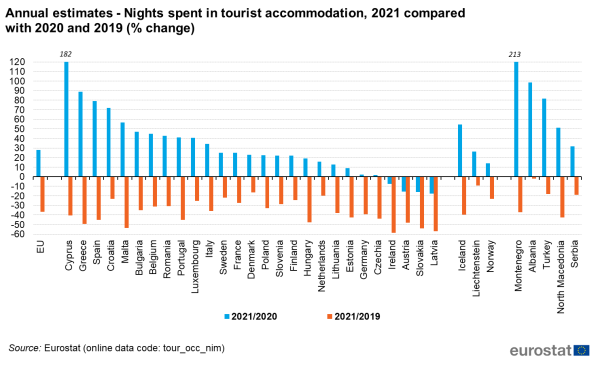 Table 4 looks closer at 2021 monthly data, comparing it with the pre-Covid 2019 figures. Figure 5 shows that the seasonal pattern was heavily distorted in 2020 due to the severe lockdowns (in particular in spring during the first wave of Covid). In 2021, the seasonal pattern was more similar to the pre-pandemic year 2019, and in the course of 2021 the monthly figures tended to approach the level of corresponding months in 2019.

During each of the first four months of 2021, January to April, nearly 80 % fewer nights were spent in EU tourist accommodation compared with the same months in 2019. May and June 2021 showed the first signs of recovery, remaining however low compared with May and June 2019 (-63 % and -47 % respectively). The upward trend continued in July 2021 (-21 %) and in August 2021 when the number of nights spent reached nearly 90 % of the pre-Covid August 2019 figures. The recovery continued in September and October 2021, however at a slower pace (respectively -14 % and -13 % compared with September and October 2019). November 2021 showed a slight slowdown of the upward trend with 20 % fewer nights compared with November 2019, while the rapid spread of the Omicron variant around the world in December 2021 slowed further down this trend to -27 % compared with 2019 (see also Figure 5). 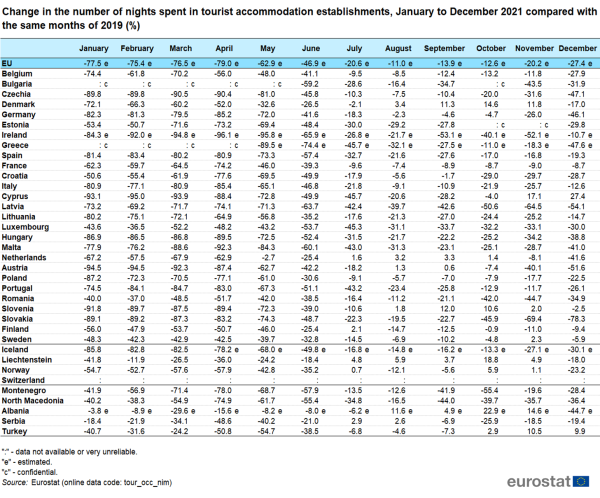 Table 4: Change in the number of nights spent in tourist accommodation establishments, January to December 2021 compared with the same months of 2019 (%) - Source: Eurostat (tour_occ_nim) 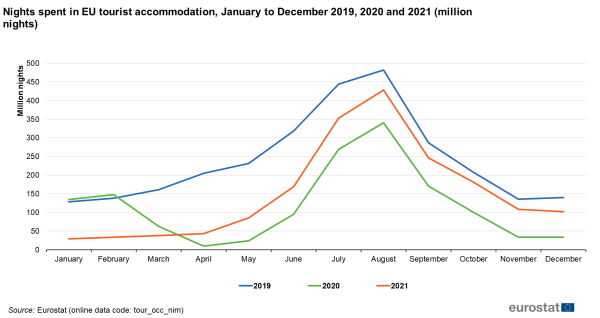 Figure 6 looks at monthly data broken down by type of accommodation. For each month of 2021 compared with the same month of 2019, hotels and similar establishments recorded the highest drops, followed by rented holiday accommodation. The decrease in the number of nights spent in EU campsites was lower than the other two segments of tourist accommodation in all months, while in September, October and November 2021 more nights were spent in campsites compared with the same months in 2019. However, since campsites represent only 18 % of the total nights spent in EU tourist accommodation, their impact on the overall figures is limited. 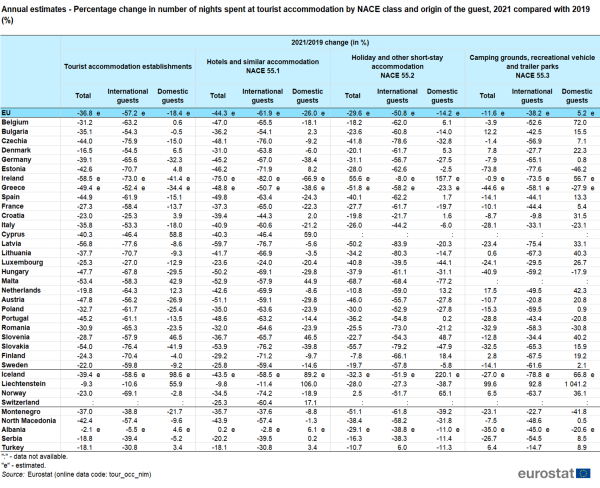 Table 5: Annual estimates - Percentage change in number of nights spent at tourist accommodation by NACE class and origin of the guest, 2021 compared with 2019 (%) - Source: Eurostat (tour_occ_nim)

Since the outbreak of the pandemic, the different restrictions and the Covid fear advantaged domestic tourism instead of travelling abroad. In 2021 compared with 2019, nights spent by non-residents (international guests) fell by 57 %, while nights spent by residents (domestic tourists) fell by 18 % (see Figure 7). Although domestic tourism was less affected, it can only partly compensate for the decline in international tourism and countries that depend on inbound tourism have been hit the hardest.

All EU countries with available data recorded drops in nights spent by international guests, ranging from -78 % in Latvia to -25 % in Croatia. Domestic nights on the other hand increased in eight EU countries (Cyprus, Slovenia, Malta, the Netherlands, Denmark, Estonia, Croatia and Belgium) while the biggest drops were registered in Slovakia and Ireland (respectively -42 % and -41 %) with the remaining countries having decreases of less than 35 %. 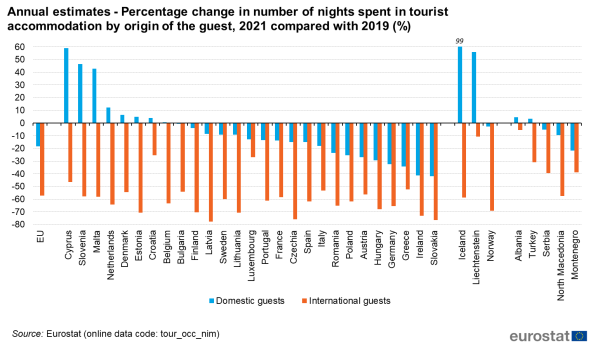 Figure 7: Annual estimates - Percentage change in number of nights spent in tourist accommodation by origin of the guest, 2021 compared with 2019 (%) - Source: Eurostat (tour_occ_nim)

Domestic tourism shows full recovery from July to October 2021, with the monthly number of nights spent reaching and surpassing the levels of the same months in 2019. Nights spent in November and December 2021 fell to levels lower than in 2019. The difference, however, was less significant than that of the first six months of 2021 compared with the corresponding months of 2019 (see Figure 8). International tourism, on the other hand, has been hit hardest by the pandemic and its recovery has been delayed compared with domestic tourism. From August onwards, however, the trend seems to get closer to 2019 levels, with the number of nights spent by international tourists in October and November 2021 reaching two thirds of the same months in 2019.

In July 2020, Eurostat launched a voluntary transmission of monthly accommodation data broken down by country / world geographical area of the guest. The purpose of this exercise is to contribute to the monitoring of the Covid-19 impact on the tourism sector and its recovery in the course of 2020 and 2021. 27 countries, of which 22 are EU Member States, are participating in this voluntary exercise. This chapter gives some results based on this exercise, analysing data from January 2020 to December 2021.

The data confirms the findings of the previous chapter: domestic tourism restarted faster than incoming tourism. Looking closer at the segment of incoming tourism, nights spent by residents of other EU countries also began to recover faster than tourism from outside the EU (see Figure 9). 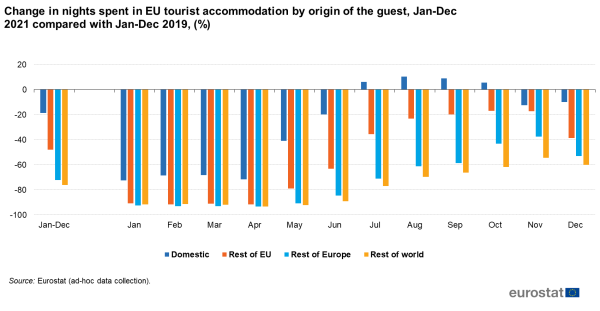 Data on tourism nights is included in the interactive European Statistical Recovery Dashboard, which contains monthly and quarterly indicators from a number of statistical areas relevant for tracking the economic and social recovery from the Covid-19 pandemic, across countries and time. The dashboard is updated every month with the latest available data for each indicator.

Furthermore, this article is looking at monthly data on nights spent by country of origin. In July 2020, Eurostat launched a voluntary transmission of monthly accommodation data broken down by country / world geographical area of the guest. The purpose of this exercise is to contribute to the monitoring of the Covid-19 impact on the tourism sector and its recovery in the course of 2020 and 2025. There are 27 countries, of which 22 EU Member States, participating in this voluntary exercise. The results are disseminated as an Excel file via the public part of CIRCABC (Tourism Statistics).

For the year-to-year evolution of the number of nights spent in tourist accommodation and a detailed analysis of 2019 annual data, see Tourism statistics - annual results for the accommodation sector.

The EU is a major tourist destination, with four Member States among the world’s top ten destinations for holidaymakers, according to UNWTO[1] data. Tourism is an important activity in the EU which contributes to employment and economic growth, as well as to the development of rural, peripheral or less-developed areas. These characteristics drive the demand for reliable and harmonised statistics on this activity, as well as within the wider context of regional policy and sustainable development policy areas.

Regulation (EU) No 1051/2011 of 20 October 2011 implementing Regulation (EU) No 692/2011 concerning European statistics on tourism, as regards the structure of the quality reports and the transmission of the data.