Highlights
Tweet
In 2019, one third of total tourism nights of Europeans were spent in July or August.
Tweet

More than one in four EU residents' tourism nights in April, May or September were spent by older people aged 65 or more.

This article is part of the Eurostat online publication Tourism trips of Europeans, which provides recent statistics on tourism demand in the European Union (EU) and EFTA countries. 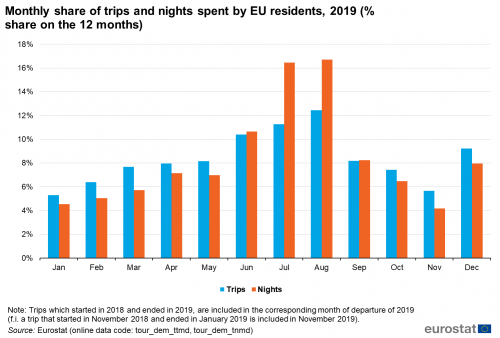 In August 2019, EU residents made nearly 85 million long trips of at least four overnight stays. This represents 17 % of all long trips made through the entire year. Looking at the summer season from June to September, more than half of all long trips in 2019 were made during these four months (see Figure 2).

The distribution of short trips over the 12 months was more even. June was the most popular month for trips between one and three overnight stays, followed by December. 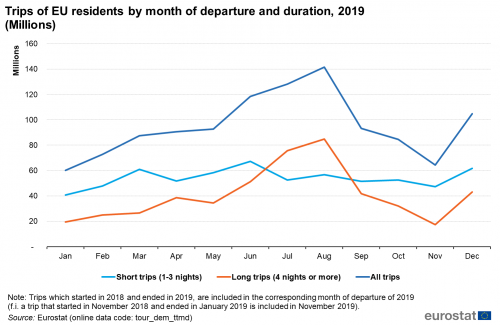 In 2019, EU residents made more than 827 million trips inside their own country (domestic trips) and more than 311 million trips abroad. The spread over the twelve months of the year is relatively comparable for domestic and outbound trips (see Figure 3) although the summer and Christmas peaks are more pronounced for the domestic ones.

Domestic and outbound trips made during the peak month (August) were respectively 2.3 and 2.5 times higher than those made in the weakest months (January and November respectively). 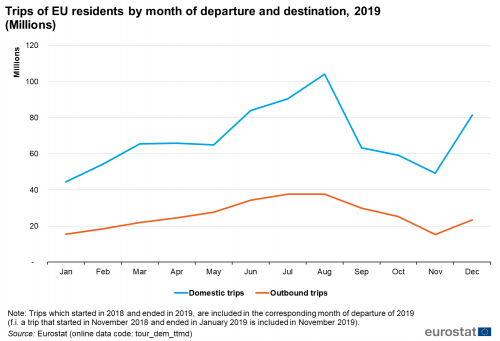 On average over the year, business trips represented 11 % of all trips made by EU residents. As shown in Figure 4, this share ranged from 18 % in November to 5 % in each of the main holiday months, July and August. 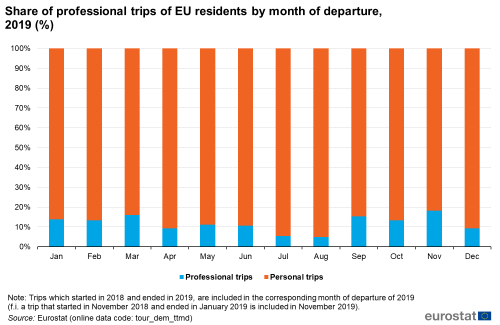 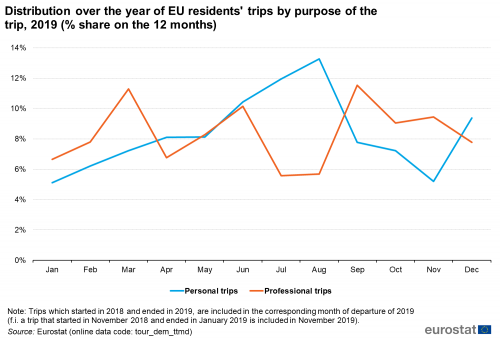 Figure 5: Distribution over the year of EU residents' trips by purpose of the trip, 2019 (% share on the 12 months) - Source: Eurostat (tour_dem_ttmd)

Looking at national data, July or August were the most popular months for going on holidays for residents of all but four EU Member States: Germany and Luxembourg, where June was the peak month, Malta (September closely followed by December) and Romania (December closely followed by August) (see Table 1 and Figure 6). At EU level, one in eight trips were concentrated in just one month (August). This peak was even more pronounced for Greece where the residents preferred August for 32 % of their trips, followed by Italy and Bulgaria where 19 % of their residents' trips were made in August. 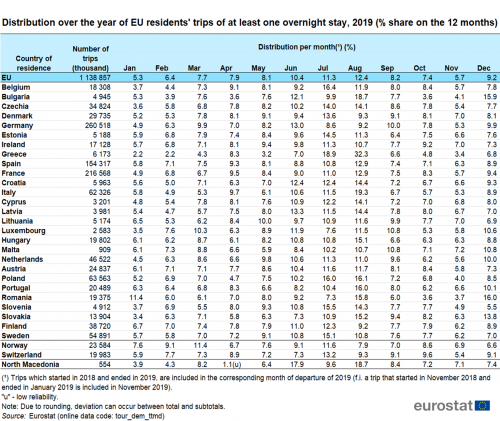 Table 1: Distribution over the year of EU residents' trips of at least one overnight stay, 2019 (% share on the 12 months) - Source: Eurostat (tour_dem_ttmd) 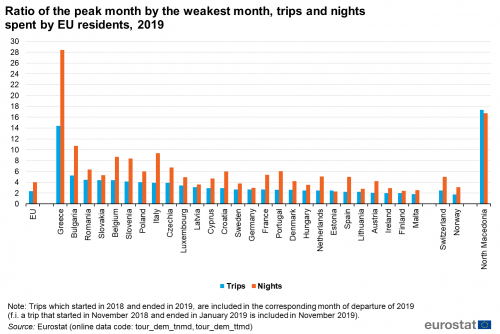 When taking into account the duration (nights spent) rather than the number of trips, seasonality was more pronounced: the peak month for tourism nights of residents of all but one EU country was either July or August (see Table 2 and Figure 8). Only German tourists spent in June more nights than in any other month. 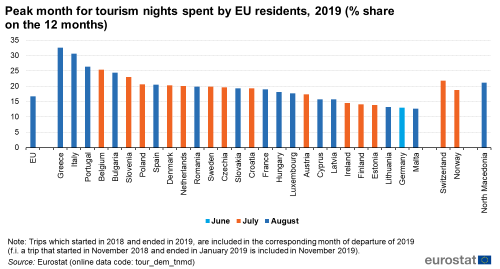 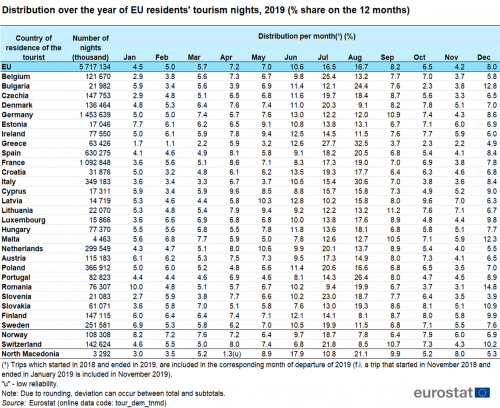 During the two summer months of July and August, EU residents spent nearly one third of all tourism nights spent in 2019, while for the Greek tourists this share was 60 %, followed by Italians (46 %) and Slovenians (42 %). 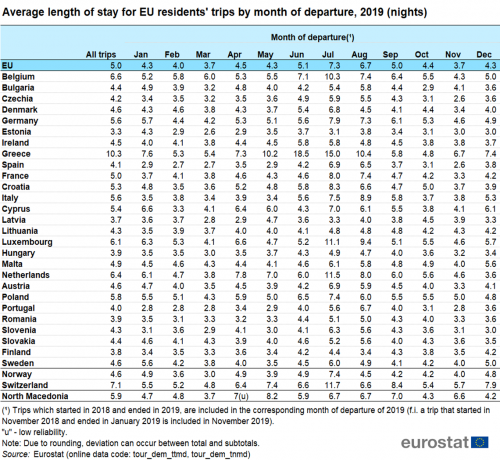 At least one in four tourism nights in April, May, September and November were spent by people aged 65 or more

Looking at the age of the tourist, 22 % of all tourism nights in 2019 were spent by Europeans aged 65 or more. Compared with the seasonal pattern of nights spent by the other age groups, these nights were more evenly spread throughout the year. The July and August peak was a bit less pronounced, representing 28 % of the entire year's tourism nights, while for the other age groups this share was on average 35 % (see Figure 9). People aged 65 or more were more likely to travel during the shoulder season (April to June and September to October, i.e. the months in between the bottom and peak season). 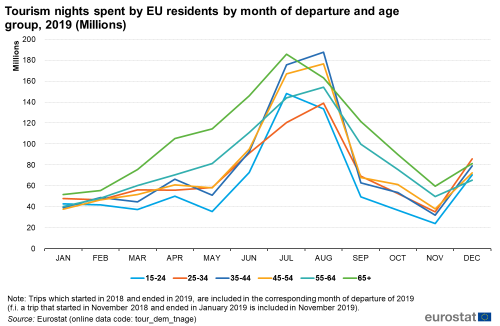 At least 25 % of all the nights spent in April, May, September and November were spent by older tourists aged 65 or more, with May reaching 29 % (see Figure 10). 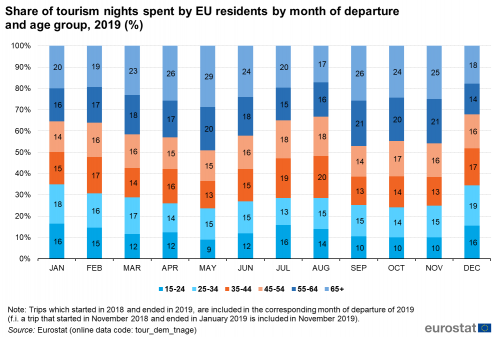 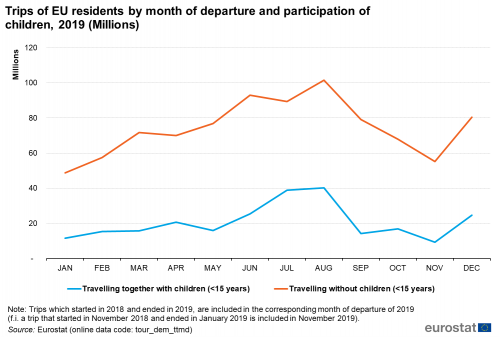 Such trips had a significant impact on the overall seasonality of tourism. Figure 12 shows their high concentration, in terms of nights spent, in July and August, the main school summer holiday months: nearly half (46 %) of these nights were spent during these two months while for trips where no children were participating, this share was 29 %. 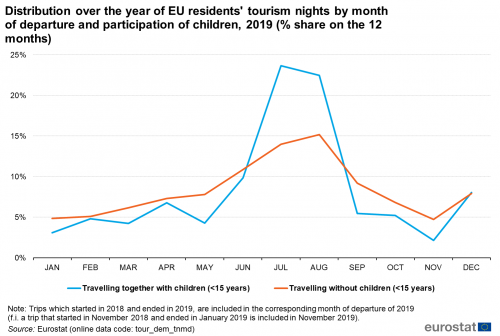 Figure 12: Distribution over the year of EU residents' tourism nights by month of departure and participation of children, 2019 (% share on the 12 months) - Source: Eurostat (tour_dem_tnmd)

More than one in three (35 %) tourism nights spent by Europeans in July and 32 % of those spent in August, were spent by tourists whose travel group included children aged less than 15 years (see Figure 13). 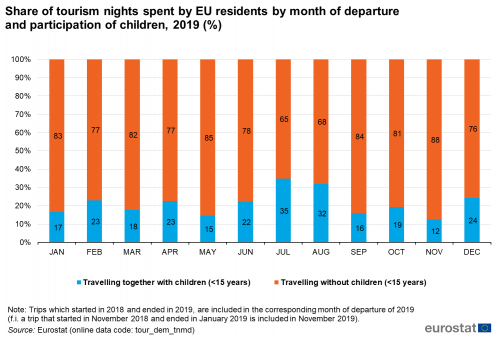 Figure 13: Share of tourism nights spent by EU residents by month of departure and participation of children, 2019 (%)- Source: Eurostat (tour_dem_tnmd)

The scope of observation for data on tourism trips are all tourism trips with at least one overnight stay, made by the resident population aged 15 and over. It includes trips made for private or professional purpose, outside the ususal environment.