The island typology is applied at the level of NUTS regions. Island regions are defined as NUTS level 3 regions within the European Union (EU) that are entirely composed of one or more islands.

The island typology is a classification based on the following two categories:

Island regions are NUTS level 3 regions that are entirely composed of one or more islands. In this context, islands are defined as territories having:

In order to determine whether or not the above criteria are met, Eurostat uses geographical information systems of the European Commission (GISCO) which provide, among others, thematic geospatial information and information on transport networks.

NUTS level 3 island regions may correspond to a single island or they may be composed of several islands. Furthermore, an island region may be part of a bigger island that contains more than one NUTS level 3 regions: for example, the regions that compose Ireland and Northern Ireland, Corsica, Sardinia, Sicily or Crete.

The typology of island regions may (optionally) be used to distinguish five different subcategories, depending on the size of the major island related to the NUTS level 3 region in question:

Note that the definition of an island region is such that it must be entirely composed of islands. There are many examples of islands in the EU that form part of a NUTS level 3 region characterised by its islands, but where part of the territory also contains mainland areas and where, as a result, the region is classified as a non-island region. For example, this is true along the whole of the Adriatic coastline in Croatia where each NUTS level 3 region is concurrently composed of a mainland territory and islands.

Note that the regions of Great Britain are not considered as island regions as Great Britain is connected to continental Europe by a tunnel under the English Channel and therefore does not meet the criteria of being an island. Equally, Bornholm is the only island region in Denmark, as all other regions either contain a combination of mainland and islands, or are composed of islands connected to the mainland by way of a bridge and/or tunnel. Note the island typology is not defined/recognised within the NUTS Regulation, although the NUTS level 3 regions themselves are defined therein.

There are links between the typologies for coastal areas (see Chapter 4) and coastal regions (see Chapter 7) and the island typology, given that all island regions (by definition) have a coastline.

Map 1 provides an overview of the final classification for the island typology. 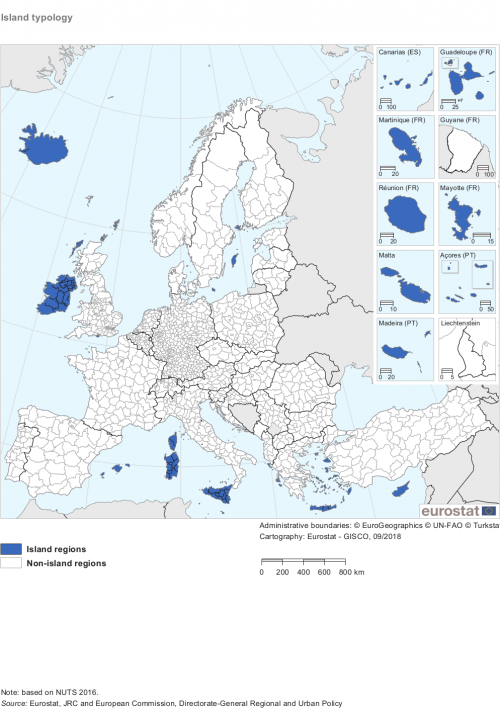 The island typology was initially defined for a Eurostat publication titled, Portrait of the islands, which provided information on all of the inhabited islands within the EU, except for islands with a national capital city. This meant that Ireland and the United Kingdom were excluded from the typology (the publication was released before the Channel tunnel was in operation). For a Green Paper on Territorial Cohesion (COM(2008) 616 final), an alternative approach was adopted, based on those regions whose entire population lived on an island.

Thereafter, the most recent changes made to the island typology were developed by the Directorate-General for Regional and Urban Policy in association with Eurostat, whereby the classifications were simplified (as described above) by removing the criteria for the presence of a national capital, which meant that Ireland, Malta, Cyprus and Iceland could be included as island regions (despite the presence of a national capital).

The island regions classification should be updated to reflect any changes to the underlying sources of information that are used in its compilation, in other words, changes to geospatial data (for example, the construction of a new bridge or tunnel) or changes to the boundaries of NUTS level 3 regions.

The NUTS Regulation specifies that the classification of regions should remain stable for a period of at least three years; the most recent updates were for NUTS 2010, NUTS 2013 and NUTS 2016. After each revision of the NUTS classification, the boundaries of the regions should be re-assessed to see if they have impacted on the delineation of any island regions (for example, an island region may be merged with a mainland region).

Eurostat publishes data for the island typology through Regions and cities illustrated.

Eurostat’s website provides information for a wide variety of indicators for the island typology. These statistics are available for the following statistical domains: demography, population projections, the labour market, crimes recorded by the police, economic accounts, business demography, intellectual property rights and transport. They are available here. 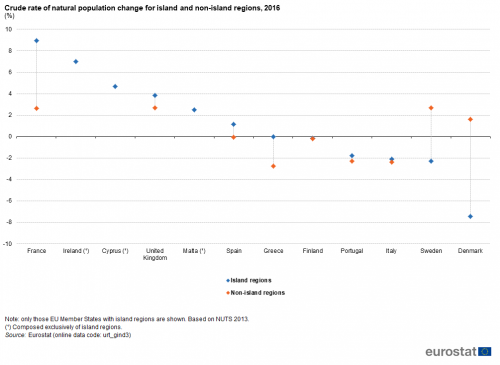 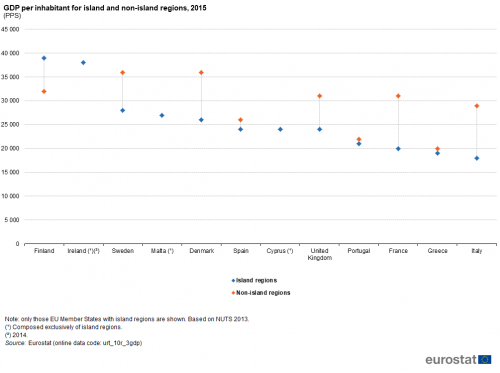 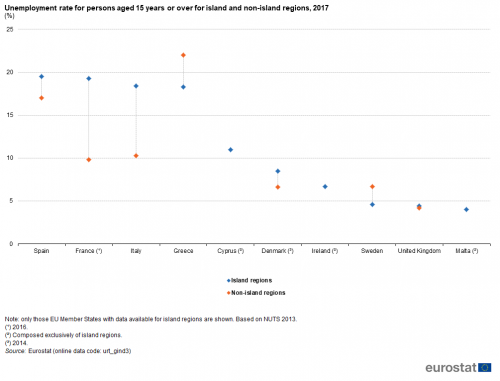