At least 1.12 million caesarean sections performed in the EU in 2020.

In nearly all EU Member States, there has been a fall in recent years in the use of in-patient procedures for cataract surgery.

This article is one of a set of statistical articles concerning healthcare activities in the EU which forms part of an online publication on health statistics.

In some EU Member States, healthcare activities were impacted (particularly at the start of the pandemic) by an influx of patients with COVID-19. The pandemic also resulted in a range of knock-on effects including, among others, some services being curtailed/postponed due to the number of COVID-19 patients, staff shortages within hospitals and day care centres due to infection/quarantine procedures, and patients being hindered in accessing medical services due to their own infection/quarantine as well as lockdown or travel restrictions.

Number of surgical operations and procedures

Tables 1 and 2 indicate how frequently a selection of the most common surgical operations and procedures were conducted in 2020; in both tables the data are presented relative to the size of the population (per 100 000 inhabitants). For several of these operations and procedures, such as cholecystectomies, information is given on the frequency with which these are carried out laparoscopically, in other words, using minimally invasive surgery (this technique involves performing an operation through only a small incision in the body and is also known as keyhole surgery), as well as a total figure. 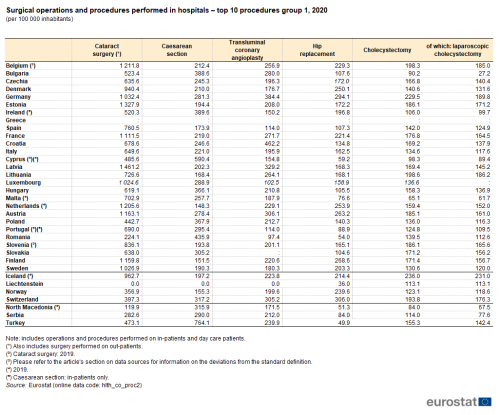 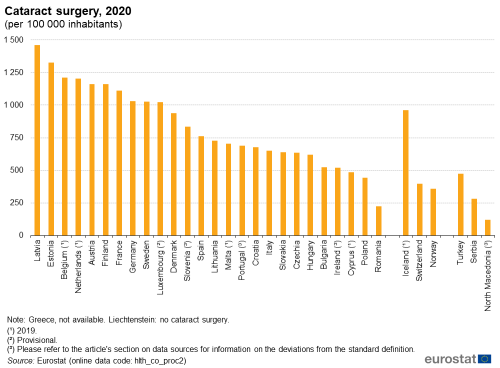 At least 1.12 million caesarean sections performed in the EU

In most of the EU Member States, between 200 and 400 caesarean sections were performed per 100 000 inhabitants in 2020 (see Figure 2), with this procedure more frequent in Romania and Cyprus (2019 data), and less frequent in Estonia, Slovenia, Sweden, Spain, Lithuania, Finland and the Netherlands (2019 data). 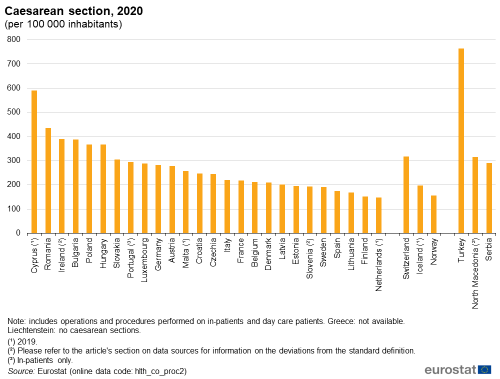 Transluminal coronary angioplasties concern the opening up of blocked coronary arteries (ICD-9-CM codes 36.01, 36.02 and 36.05). In 2020, transluminal coronary angioplasties were most common (relative to population size) in Croatia and Germany where they were performed on average 462 and 384 times per 100 000 inhabitants respectively. They were conducted between 150 and 329 times per 100 000 inhabitants in most of the remaining Member States for which data are available, with Portugal, Spain, Luxembourg and Romania below this range. 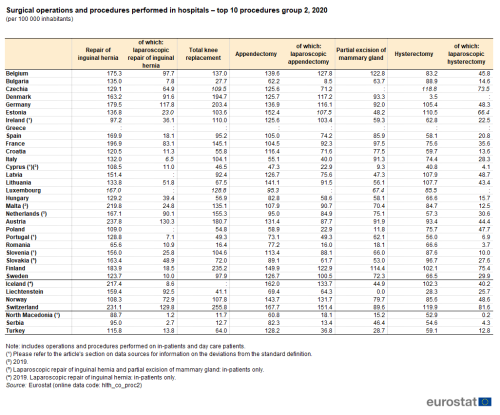 Repairs of inguinal hernias involve covering the hernia defect with mesh from within the abdomen in order to patch it (ICD-9-CM codes 53.0 and 53.1). Repairs of inguinal hernia were typically undertaken between 120 and 200 times per 100 000 inhabitants in 2020, with Malta (2019 data) and Austria reporting a higher frequency while Poland, Cyprus (2019 data), Ireland and Romania reported lower frequencies. In Germany, Denmark, Belgium, Austria, the Netherlands (2019 data) and Czechia, a majority (up to 66 %) of these repairs were undertaken laparoscopically. This share was below 50 % in the remaining EU Member States for which data are available; the share was below 10 % in five of the EU Member States and was lowest (at 4.9 %) in Italy.

The frequency of appendectomies (removal of an (infected) appendix; ICD-9-CM codes 47.0 and 47.1) varied less between the EU Member States than did most other procedures presented in Tables 1 and 2 and much less than the frequency of laparoscopic appendectomies. The frequency of the latter in 2020 was higher in Belgium, Finland, Denmark and Germany than in the other EU Member States, while it was lowest in Romania and Bulgaria. The share of appendectomies that were performed laparoscopically varied greatly, from 14 % of the total number of these procedures in Bulgaria to over 80 % in eight Member States, including Belgium and Denmark where the share exceeded 90 %.

A selection of surgical operations and procedures which have generally become more frequent during recent years is presented in Table 3; three of these concern laparoscopic techniques. Data are generally presented for 2010 and 2020: alternative years are presented for some EU Member States – see Table 3 for the precise coverage. 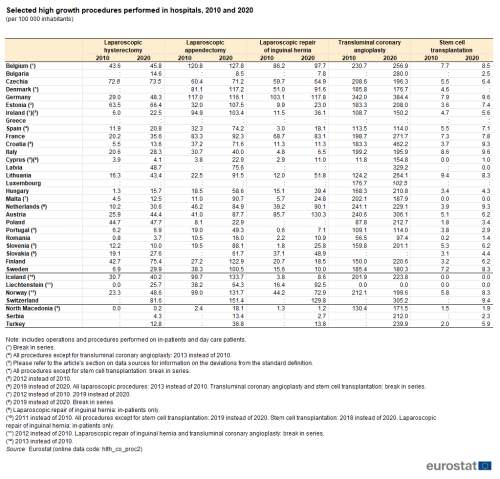 The most rapid increase (relative to population size) was observed for laparoscopic hysterectomies (keyhole surgery to remove all or part of the uterus). Between 2010 and 2020, the frequency of laparoscopic hysterectomies increased in 21 of the 22 EU Member States for which data are available, the exception being Slovenia. Eight Member States reported the frequency of this procedure more than doubling during the period under consideration. The largest relative increase was in Hungary where it was approximately 12 times as common in 2020 as it had been in 2010 (up from 1.3 to 15.7 procedures per 100 000 inhabitants).

Among the 22 EU Member States for which data are available for 2010 and 2020, all but one reported an increase in laparoscopic appendectomies; the exception was Germany where the frequency relative to the population size fell marginally. The frequency of this procedure more than doubled in 12 Member States. The biggest increases were in Cyprus (2013–2019) and Malta (2012–2019), where the frequencies were 6.0 and 8.3 times as high in 2019 as in the earlier year.

Between 2010 and 2020, the frequency of laparoscopic repair of inguinal hernia increased in 19 of the 22 Member States for which data are available. In Croatia, there was no change (2012–2020), while in Finland there was a relatively small decrease and in Sweden a larger one. In 11 Member States, the frequency of this procedure more than doubled during the period under consideration. By far the largest relative increases were observed in Portugal and Slovenia, the frequency being 12.5 times as high in 2020 as in 2010 in the former and 14.7 times as high in the latter; note however that in both cases the frequency of laparoscopic repair of inguinal hernia in 2010 was relatively low (less than 2 procedures per 100 000 inhabitants).

Transluminal coronary angioplasty was the most common procedure among those shown in Table 3. In 16 out of the 23 EU Member States for which data are available, the frequency of transluminal coronary angioplasties increased between 2010 and 2020. The largest increase was in Cyprus between 2010 and 2019, but there is a break in series. Elsewhere, the largest increase was in Croatia, where the frequency in 2020 was 2.5 times as high as in 2012. The decrease in frequency observed in seven Member States was most substantial in Luxembourg, down more than two fifths.

Stem cell transplantation was the least common procedure among those shown in Table 3. A total of 19 out of 22 EU Member States for which data are available for 2010 and 2020 reported an increase in the number of transplants. The exceptions were Malta (2012–2019) where the number remained at zero, and Lithuania and Portugal where the frequency declined. Aside from Cyprus (where there is a break in series), the largest increase was in Romania, where the frequency was nearly seven times as high in 2020 as in 2010.

Tonsillectomies were performed with a decreasing frequency

A selection of surgical operations and procedures which have become less common in recent years is presented in Table 4. Three of these – hysterectomies, appendectomies, and repair of inguinal hernias – are procedures whose overall frequencies have declined despite relatively fast growth in their performance using laparoscopic techniques. In other words, the increase in the frequency of these procedures using laparoscopic techniques was less than the overall decrease in these procedures. Data are generally presented for 2010 and 2020: alternative years are presented for some EU Member States – see Table 4 for the precise coverage. 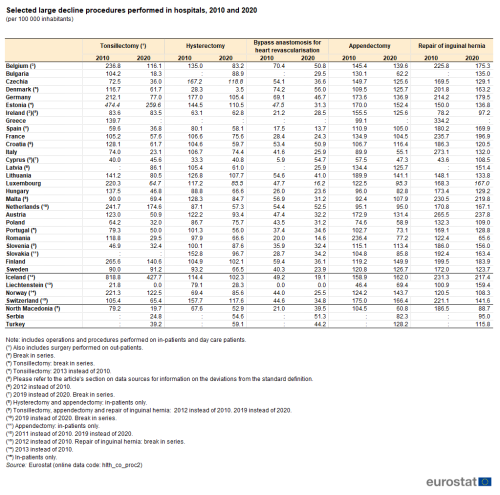 The removal of tonsils, a tonsillectomy, remains a relatively common procedure despite a decline in its frequency; note that the data for this procedure also includes surgery performed on out-patients. Among 24 EU Member States for which data are available, the frequency of tonsillectomies fell in 22 between 2010 and 2020. Moderate increases were reported in Cyprus (where there is a break in series) and Sweden. The sharpest decline in the frequency of tonsillectomies was recorded in Bulgaria, down by more than four fifths.

For bypass anastomosis for heart revascularisation (a bypass operation that concerns one or more coronary arteries), 21 of the 24 Member States for which data are available reported a decline in the frequency between 2010 and 2020. While the frequency of carrying out bypass anastomosis for heart revascularisation increased greatly in Cyprus, there is a break in series. More modest increases were observed in Ireland (where there is also a break in series) and in Slovakia. Decreases of two fifths or more in the frequency were reported for Sweden and Malta (2010–2019), while in Luxembourg the frequency in 2020 was around two thirds lower than it had been in 2010.

Based on data for the 26 EU Member States for which data are available, around four fifths (21) recorded fewer appendectomies performed in 2020 than in 2010. The frequency of this operation more than halved in Bulgaria and was down by around two thirds in Romania. The largest increase in the frequency of this procedure was 26 % in Finland, with smaller increases in Malta (2012–2019), Denmark, Croatia (2012–2019) and Sweden.

Among 24 EU Member States for which data are available, 22 reported decreases in the frequency of repairs of inguinal hernias; the only exceptions were Cyprus (2010–2019) and Ireland, both of which have a break in series. There were five Member States where the frequency of carrying out a repair of an inguinal hernia fell by at least one quarter, among which Italy was the only one to record a decrease of more than a half. 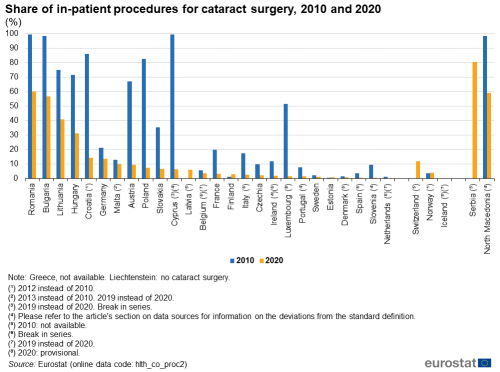 Only the main procedure performed on a patient whether during a hospital stay, day case or out-patient treatment should normally be reported.

An in-patient is a patient who is formally admitted (or ‘hospitalised’) to an institution for treatment and/or care and stays for a minimum of one night or more than 24 hours in the hospital or other institution providing in-patient care. An in-patient or day care patient is discharged from hospital when formally released after a procedure or course of treatment (episode of care). A discharge may occur because of the finalisation of treatment, signing out against medical advice, transfer to another healthcare institution, or because of death.

Statistics on healthcare resources and healthcare activities (such as information on surgical operations and procedures) are documented in this background article which provides information on the scope of the data, its legal basis, the methodology employed, as well as related concepts and definitions.

For surgical operations and procedures the International Classification of Diseases – clinical modification (ICD-9-CM) is used.

For any particular type of surgical operation or procedure, the extent to which this is performed is influenced by a number of factors, including the size of the population and the incidence of the underlying disease or injury among the population. Other factors include differences in medical practices between countries and the availability of financial and human resources.

The European core health indicators (ECHI) shortlist includes an indicator on ‘selected surgeries’ for 11 categories of surgical operations and procedures performed in hospitals in the chapter on health interventions: health services indicators.