Active citizenship covers civic and political participation by migrants and the acquisition of equal rights and responsibilities by migrants. This article presents information for two key indicators: both are considered to be positive indications of migrant integration and they form part of a set of Zaragoza indicators that were agreed by European Union (EU) Member States in Zaragoza (Spain) in April 2010. More specifically, the article presents Eurostat statistics on:

EU Member States granted citizenship to 706 000 persons in 2019, representing 2.0 % of all foreign citizens in the EU 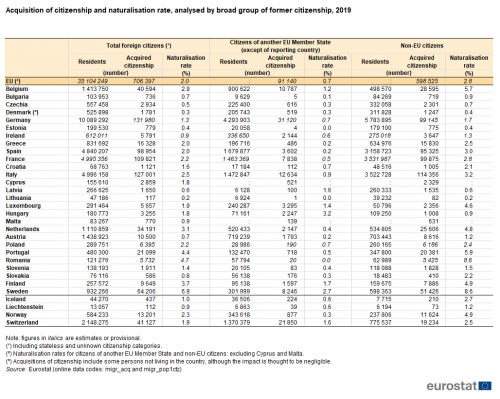 A longer analysis over time (note the change in the composition of the EU aggregate between 2012 and 2013) is shown in Figure 1. During the period 2009-2019, the EU’s naturalisation rate for foreign citizens (including stateless and unknown citizenship categories) ranged between 2.0 % and 2.7 %. Relative peaks were recorded in 2013 and 2016: the former may be attributed (at least in part), to a sudden increase in the number of people who became Spanish citizens that year (more than doubling between 2012 and 2013, as the number of people acquiring Spanish citizenship increased from 94 100 to 225 800). The lowest rates were recorded in the latest years for which data are available, as the naturalisation rate fell between 2017 and 2018 from 2.1 % to 2.0 % and remained there in 2019; this was the same rate (2.0 %) as had been recorded in 2009, in other words at the start of the time series shown in Figure 1. 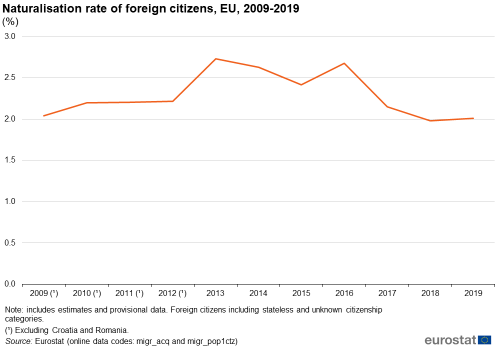 In 2019, the highest naturalisation rates for all foreign citizens were recorded in Sweden (6.9 %), Romania (4.7 %) and Portugal (4.4 %). By contrast, there were ten EU Member States where the naturalisation rate for foreign citizens was less than 1.0 %: the three Baltic Member States, Ireland, Malta, Slovakia, Austria, Bulgaria, Czechia and Denmark; the lowest rate was recorded in Lithuania (0.2 %).

The naturalisation rate for non-EU citizens was 2.8 %, considerably higher than the rate for citizens of other EU Member States which stood at 0.7 % 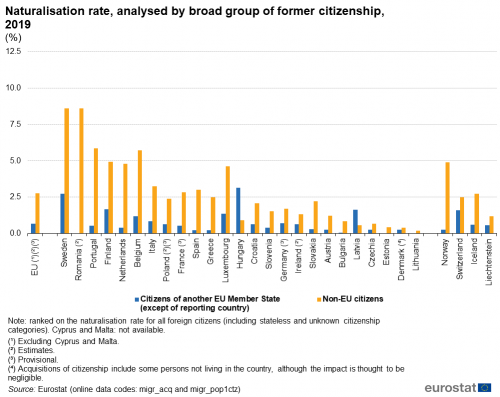 In 2019, the EU’s naturalisation rate for foreign citizens was 0.2 percentage points higher for women (2.1 %) than it was for men (1.9 %). Looking at developments during the period 2014-2019 (see Figure 3) a slightly higher female naturalisation rate was recorded each year; the gender gap in favour of women fluctuated between 0.18 and 0.27 points during this period.

A more detailed analysis of the situation in 2019 is presented in Figure 4, which confirms the results observed for the EU insofar as the female naturalisation rate for all foreign citizens was higher than the male naturalisation rate in the majority of the EU Member States. By contrast, higher naturalisation rates for males were recorded in Bulgaria and Greece, while in Sweden, Latvia and Ireland the rates for the two sexes were almost identical. Only two Member States recorded gender gaps that were 1.0 percentage points or more: in Finland and Croatia, the rates for females were 1.4 and 1.1 points higher respectively than the rate for males.

The highest naturalisation rates were generally recorded among young people

While children tended to record the highest naturalisation rates, this does not necessarily mean that they accounted for the largest absolute number of people acquiring EU citizenship. A more detailed analysis of the absolute figures reveals that of the 706 000 foreigners who acquired the citizenship of one of the EU Member States in 2019, the largest group was composed of people aged 35-39 years (83 000), closely followed by people aged 30-34 years (77 000). People aged 40-44 years and 10-14 years accounted for the next highest numbers of non-EU citizens acquiring the citizenship of an EU Member State, 70 000 and 69 000 respectively.

The data presented in the rest of this article refer exclusively to non-EU citizens (as opposed to foreign citizens of another EU Member State). The focus is on non-EU citizens who received a long-term residence permit for a minimum period of at least five years validity, thereby providing them with a more robust level of protection as regards their status.

Long-term residence permits valid at the end of the year 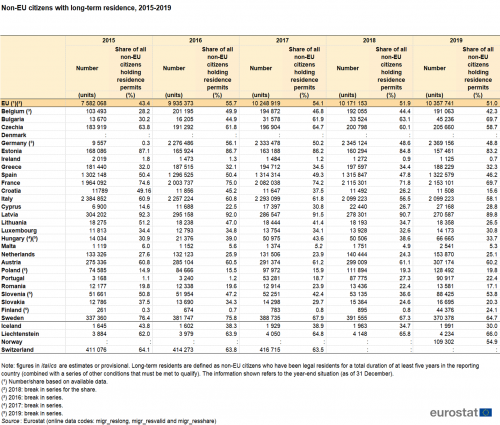 At the end of 2019, there was a noticeable difference between EU Member States concerning the share of resident non-EU citizens with long-term residence permits. Long-term residents accounted for more than three fifths of the total number of non-EU citizens holding a residence permit in 6 of the 26 Member States for which data are available (no information for Denmark), with this share reaching 83.2 % in Estonia and 89.8 % in Latvia. Most long-term residents in Latvia and Estonia were classified as ‘recognised non-EU citizens’, a category that covers people who were neither citizens of the reporting country nor any other country, but who had established links to the country where they lived including some but not all of the rights and obligations of full citizenship.

At the end of 2019, almost all ‘recognised non-citizens’ in the EU held long-term residence status

The focus of Figure 6 is citizenship categories with the highest shares of long-term residency rights in the EU. Note that the information presented excludes data for non-EU citizens living in Denmark (not available) and that the figure only shows information concerning citizenship categories for which long-term resident shares in the EU were over 60.0 %. 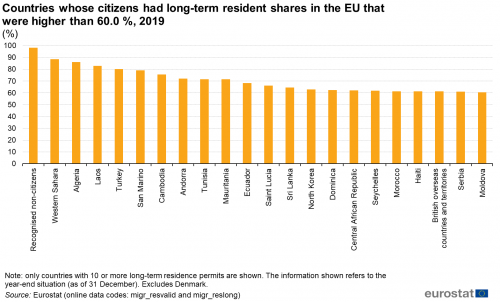 Figure 6: Countries whose citizens had long-term resident shares in the EU that were higher than 60.0 %, 2019
(%)
Source: Eurostat (migr_resvalid) and (migr_reslong)

Almost all (98.2 %) recognised non-citizens — most of whom were living in Estonia and Latvia and originated from the former Soviet Union — had long-term residency rights. At least four out of every five citizens living in the EU from Western Sahara, Algeria, Laos and Turkey had long-term residency rights. The non-EU citizens presented within this ranking were from a disparate set of countries, some being relatively close neighbours to the EU (for example, citizens of Turkey, San Marino, Andorra, Serbia or Moldova), whereas others were from much further afield (for example, citizens of Cambodia, Ecuador, Sri Lanka or Seychelles).

The highest number of non-EU citizens holding long-term residency rights in the EU at the end of 2019 was recorded among citizens of Turkey (1.5 million), followed by citizens of Morocco (1.2 million), while there were just over 600 000 citizens from Algeria with such rights, and around half a million citizens from each of China (including Hong Kong) and Ukraine. 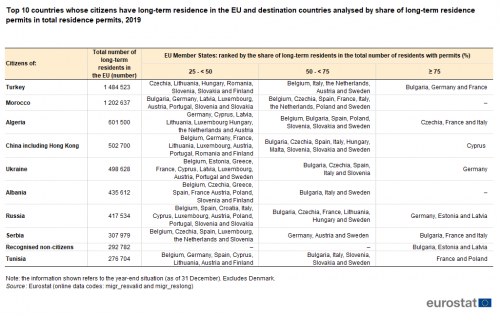 Looking at the data for 2019, Figure 7 shows that, among the 24 EU Member States for which data are available (no information for Czechia, Germany or the Netherlands), there were 544 000 new long-term residence permits issued during 2019. To give some context to this figure, it was equivalent to 7.1 % of the total number of non-EU citizens who enjoyed long-term residency status in the same Member States (excluding Denmark). 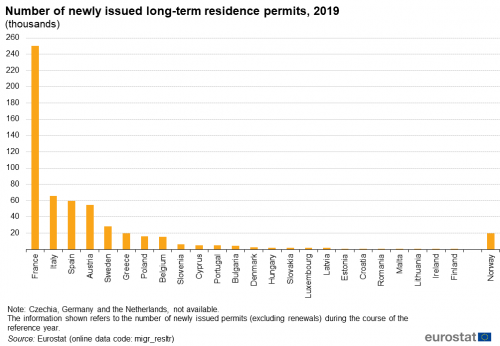 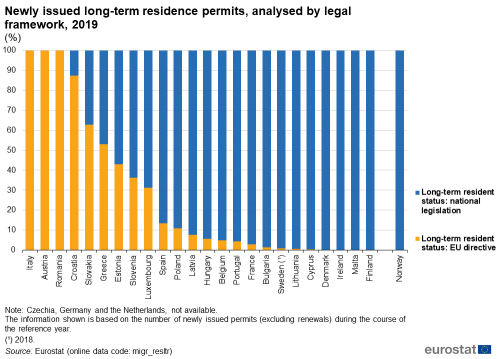 The data presented in this article are from three datasets that are received on an annual basis by Eurostat from reporting countries, having been compiled from administrative records. Note that the indicators are based on different reference periods and that the reference population varies. For example, the naturalisation rate is based on all foreign citizens (including citizens of another EU Member State), while the data for long-term residency rights refer only to non-EU citizens.

Acquisition of citizenship data for the naturalisation rate

Data on the acquisition of citizenship, available from 1998 onwards, are collected from EU Member States, EFTA and candidate countries and cover persons who were previously citizens of another country or stateless. From 2008 onwards, acquisition of citizenship data analysed by sex, age group and previous citizenship are collected under Article 3 of Regulation (EC) No 862/2007. Conditions for acquiring the citizenship of an EU Member State differ between countries, but often the requirements concern a period of (legally registered) residence combined with other factors such as evidence of social and economic integration, or an aptitude to speak the national language(s). The online metadata related to this data collection provides more information.

Naturalisation is one of the most common ways of acquiring citizenship. It is a formal act of granting citizenship to a foreign citizen who applies to be a citizen. International law does not set out detailed rules on naturalisation, but recognises the competence of every state to naturalise non-nationals.

More information and country-specific issues are presented in the online metadata for this data collection.

The EU is a relatively diverse area and several of its Member States have traditionally been a destination for migrants, whether from elsewhere within the EU or elsewhere in the world. The flow of migrants can lead to a range of new skills and talents being introduced into local labour markets and can increase cultural diversity, while also raising concerns about integration.

Immigrant integration policies are a national competence across the EU. However, since the signature of the Treaty of Lisbon in 2007, European institutions have the mandate to ‘provide incentives and support for the action of Member States with a view to promoting the integration of third-country nationals’. In June 2016, the European Commission launched an action plan for the integration of non-EU citizens. Among other actions, the plan seeks to address active participation and social inclusion in order to promote intercultural dialogue, cultural diversity and social inclusion.

A new pact on migration and asylum was presented by the European Commission in September 2020. This sought to provide new tools for faster and more integrated procedures, a better management of the Schengen area and borders, as well as flexibility and crisis resilience. The new pact on migration and asylum sets out what is intended to be a fairer, more European approach to managing migration and asylum. It aims to put in place a comprehensive and sustainable policy, providing a humane and effective long-term response to the current challenges of irregular migration, developing legal migration pathways, better integrating refugees and other newcomers, and deepening migration partnerships with countries of origin and transit for mutual benefit.

In November 2020, an Action plan on Integration and Inclusion 2021-2027 (COM(2016) 377 final) was adopted. It seeks to detail targeted and tailored support to reflect the individual characteristics that may present specific challenges to people with a migrant background, such as gender or religious background.

This article presents EU statistics in the area of active citizenship, covering the acquisition and exercising of equal rights/responsibilities for migrants, which are recognised as positive indications of migrant integration. The information presented is based on: a set of Council conclusions from 2010 on migrant integration; a subsequent study Indicators of immigrant integration — a pilot study from 2011; a report Using EU indicators of immigrant integration from 2013; and more recent data collection exercises, focusing on the naturalisation rate and the share of non-EU citizens having long-term residency status. The first of these indicators allows an analysis of migrant integration and/or recognition of the magnitude of the role that migrants play in host economies, while the second may be used to analyse the share of the migrant population living with a more protected residence status, with similar socioeconomic rights and responsibilities to those enjoyed by citizens of the host country.

Population on 1 January by age group, sex and citizenship (migr_pop1ctz)