In 2019, just over two thirds of the EU population aged 18 years and over perceived themselves as being in good or very good health, while 8.8 % perceived their health status to be bad or very bad.

An average of €710 per person was spent on healthcare in 2019 by the EU population, ranging from €250 per person or less in Czechia and Slovakia to €1 000 per person or more in Ireland, Finland, Luxembourg, Germany and Belgium. 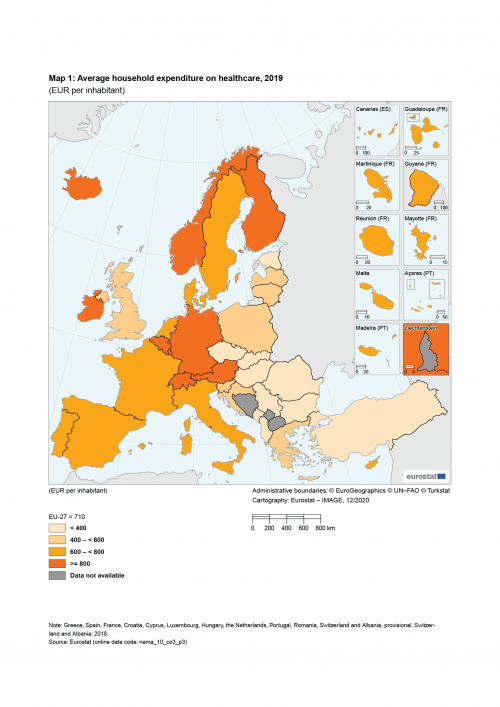 This article presents statistics related to living conditions experienced by people in the EU. It offers a picture of everyday lives across the EU, focusing on the health status of individuals in the EU-27 and the accessibility they have to healthcare, which may potentially have a profound impact on their living standards.

The statistics presented in this section are based on an evaluation of self-perceived health. Therefore, readers should bear in mind that cultural and personal differences may have an impact on the results. 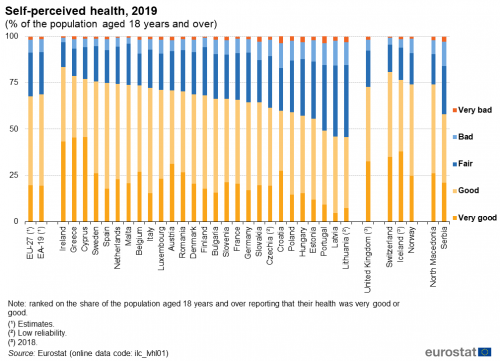 Between the EU Member States, there was a high degree of variation concerning self-perceived health status: 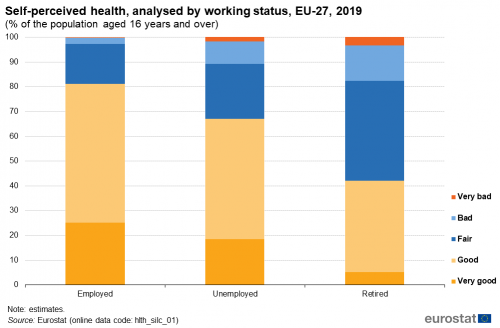 The situation was quite different for unemployed persons across the EU-27, as just over two thirds (67.0 %) of this subpopulation perceived their health as being good or very good in 2019, compared with 10.7 % who reported that they were in bad or very bad health.

As may be expected — given that many health problems tend to be more common among the elderly — there was a clear relationship between a person’s age and their (perceived) health status (see Table 1). 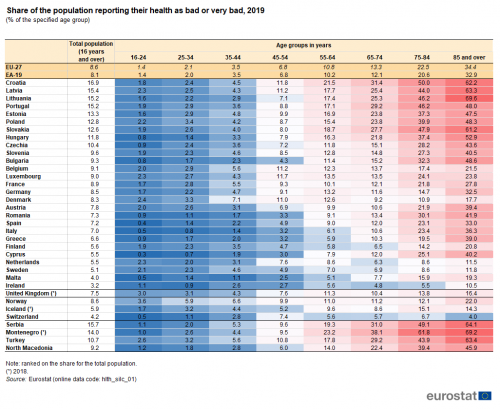 Table 1: Share of the population reporting their health as bad or very bad, 2019
(% of the specified age group)
Source: Eurostat (hlth_silc_01)

Across the EU-27, 1.4 % of persons aged 16-24 years reported that their health status was bad or very bad in 2019. This share was higher among older age groups, reaching 13.3 % among people aged 65-74 years, 22.5 % among those aged 75-84 years and 34.4 % among those aged 85 years and over. Note that these statistics exclude persons residing in homes for the elderly, where the prevalence of bad or very bad health status is likely to be higher than among the elderly who are living independently. This pattern of a higher share of elderly people (rather than younger people) with bad and very bad health status was repeated in the vast majority of EU Member States.

A more detailed analysis of the situation for persons aged 65 years and over is provided in Figure 3. It shows that in 2019 there was a gender gap, insofar as just over one fifth (20.6 %) of elderly women in the EU-27 perceived their health status as bad or very bad, while the corresponding share among men was 4.2 percentage points lower at 16.4 %. 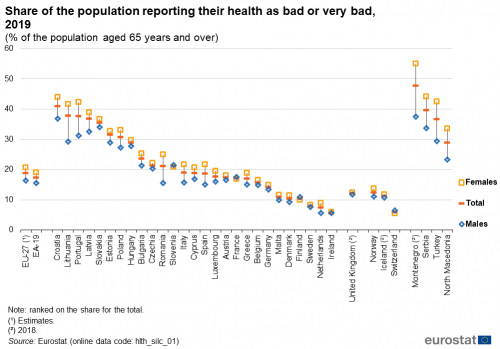 The same pattern — a higher share of elderly women (than elderly men) reporting bad or very bad health status — was repeated in 2019 in most of the EU Member States, the only exceptions being Slovenia, France and Finland, where the situation was reversed. This gender gap may, at least in part, be explained by women having a higher level of life expectancy, which may be linked to increased risks for contracting various illnesses/diseases and therefore a deterioration of health status.

High costs proved to be a barrier to accessing medical care and dental care for 0.9 % and 2.5 % of the EU-27 population

The provision of free state-funded medical examinations and treatments varies considerably between EU Member States, reflecting the different organisation of health services and the balance between public and private provisions. Relatively high medical or dental costs may act as a barrier preventing some individual patients from accessing the healthcare they require. 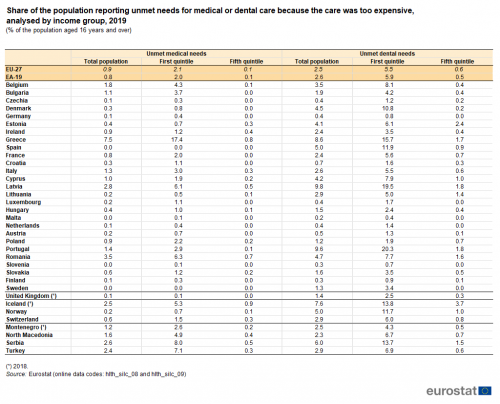 Although not usually life-threatening, dental conditions may result in excruciating pain, while untreated dental problems may have longer-term detrimental effects on both an individual’s health and well-being.

In 2019, the share of the EU-27 population aged 16 years and over reporting that the high cost/expense of dental care had resulted in unmet dental care needs was 2.5 % — about 2.8 times the corresponding share for unmet medical needs due to reasons of expense. This may reflect some people giving a higher priority to their medical needs rather than their dental needs and may also be affected by the relatively high level of dental care costs in some EU Member States, in comparison to medical costs which are often (entirely) paid for / reimbursed by social security systems.

The share of the population with unmet dental needs primarily due to the cost/expense of treatment ranged from less than 1.0 % in nine EU Member States (with the lowest share being 0.2 %, recorded in Malta) to 8.6 % in Greece, 9.6 % in Portugal and 9.8 % in Latvia.

Large differences in the amount of money households spent on healthcare

National accounts provide information about household consumption expenditure on goods and services. This information may be analysed according to the classification of individual consumption by purpose (COICOP). Division 06 of this classification covers health, including expenditure on: medical products, appliances and equipment; outpatient services; hospital services.

These variations reflect, to some degree, the different provisions for the delivery of healthcare across the EU Member States: on the one hand, there are some characterised by predominantly public systems financed through taxation, where healthcare is provided free at the point of use; others are characterised by social premium payments, whereby patients usually pay their medical bills and are later reimbursed by government. In the Member States where healthcare provision tends to be provided free at the point of use, it is more commonplace to find that expenditure per inhabitant on health was relatively low.

A more detailed analysis for the EU-27 reveals that expenditure on health in 2019 was concentrated on medical products, appliances and equipment (43.0 %) and out-patient services (39.4 %), while a relatively small share (17.6 %) was accounted for by hospital services (see Figure 4). 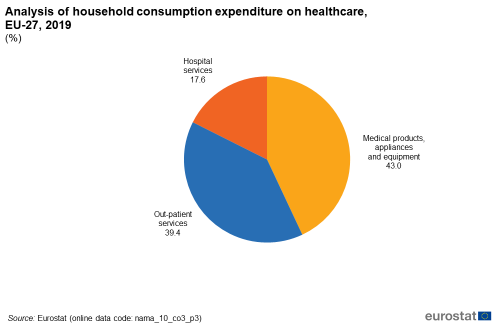 The data used in this article are primarily derived from EU-SILC. EU-SILC data are compiled annually and are the main source of statistics that measure income and living conditions in Europe; it is also the main source of information used to link different aspects relating to the quality of life of households and individuals.

The reference population for the information presented in this article is all private households and their current members residing in the territory of an EU Member State (or non-member country) at the time of data collection; persons living in collective households and in institutions are generally excluded from the target population. The data for the EU are population-weighted averages of national data.

At the end of the article data are presented from national accounts; this set of information relates to household consumption expenditure statistics.

Universal access to good healthcare, at an affordable cost to both individuals and society at large, is widely regarded within the EU as a basic need. Equally, good health is widely regarded as a major determinant for an individual’s quality of life and their ability to participate in social and family-related activities, while at the same time promoting economic growth and overall well-being.