Impact of Covid-19 crisis on services

In Q4 2021, services turnover in the EU rose by 4.2% compared with Q3 2021, with the strongest increase in transportation and storage (7.4%); the total turnover level of services is now almost 6% higher than in Q4 2019, the last quarter not affected by the Covid-19 pandemic. 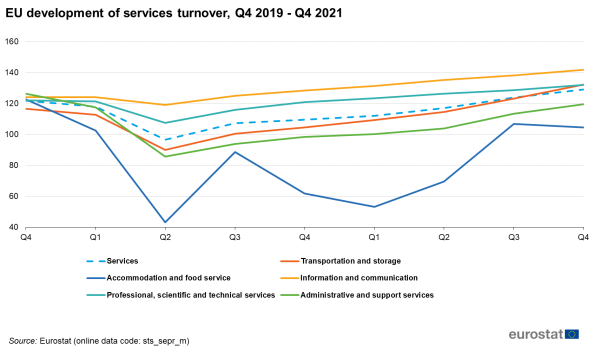 This article is part of an online publication presenting the development of short-term business statistics (STS) indicators in the Covid-19 crisis. Results for retail trade, industrial production and construction production have already been published in earlier articles. For the dates of publication see the STS release calendar.

The Covid-19 virus hit Europe in January and February 2020, with the first cases confirmed in Spain, France and Italy. To fight the pandemic, European Union Member States took a wide variety of measures. As of 17 March 2020, EU Member States imposed temporary restrictions of non-essential travel from third countries into the EU (exceptions were foreseen for nationals of all EU Member States and Schengen Associated States). Most countries also imposed restrictions on movement between EU Member States.

Schools were closed in most Member States in the second week of March. Public events were cancelled by almost all Member States and private gatherings (with numbers of persons varying from 2 to 50) were banned. In almost all countries, bars, restaurants and hotels were closed. In addition, most countries closed retail shops except for supermarkets, pharmacies and banks. In Italy and Spain, non-essential production was stopped and several countries imposed regional or even national lockdown measures, which further stifled the economic activities in many areas.

The large majority of the prevention measures were taken during mid-March 2020. Most of the prevention measures and restrictions were kept throughout April. In May and June, most measures were completely or partly lifted which resulted in an increase in service production activities. This dynamic development during the summer was not strong enough to regain the earlier losses.

With increasing Covid-19 cases after the summer holidays, several countries re-introduced containment measures in September and October. Unlike the measures in spring, these did usually not include the closing of shops but rather included hygiene measures, social distancing, restrictions of public gatherings etc. Generally, hotel and restaurant services were again most strongly affected.

In spring and summer 2021, many measures were eased and in particular travelling became easier although not as unproblematic as before the crisis. In early 2022, many measures were further reduced or even phased out. In general, the strictness, length, and nature of the Covid-19 measures in the EU are relatively heterogeneous, yet the recent figures for the last quarter of 2021 clearly show the effects of the roll-back of the containment measures.

Development of services turnover in the last quarter of 2021

Figure 1 shows the quarterly development of services turnover between Q4 2019 and Q4 2021 for total services and for the various service groups. Please note that financial and insurance services, as well as public services are not included.

In order to better understand the magnitude of the recent drops in services production and services turnover, Figure 2 shows how the various services categories usually developed on average during the years 2010 – 2019 (to make the various index levels comparable, all years have been re-referenced to an average of 100). Generally, services production shows a rather continuous increase during the year. The magnitude of the changes from one quarter to the next is usually around one index point. 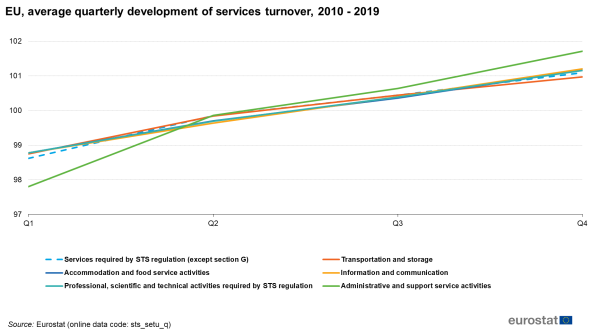 The global financial crisis in 2008 had dramatic effects on the production in industry and construction (for a detailed analysis of the 2008 crisis on STS indicators see here; its effects on services production were comparatively modest, however (see Figure 3).

Between the second quarter 2008 and the second quarter 2009, the index for the total turnover of services in the EU dropped by 7.1 index points, compared with a drop of 25.2 points from between the last quarter of 2019 and the second quarter of 2020. The strongest declines in 2008/2009 were measured for transportation and storage services (-12.9 points) and for administrative and support services (-7.9 points). Rather strong reductions were also recorded for professional, scientific and technical services (-6.8 points) and for hotels and restaurants (- 4.6 points), while the index for information services showed a decline of only 2.9 points.
By comparison, the development during the Covid-19 crisis was more dramatic. The turnover of hotel and restaurant services was reduced by almost 80 points within half a year. The index for transportation services went down by more than one quarter, the strongest losses were recorded in air transport. The index for administrative services decreased by 40 points, turnover of professional services dropped by around 15 points. The index for information and communication services was reduced by 5 points, of which telecommunications were least affected. 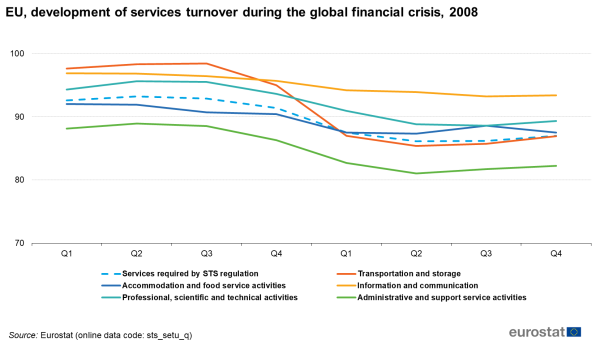 Since the Covid-19 containment measures differed between countries as to timing and strictness, it was to be expected that the effects on services production would also vary. Tables 1a and 1b show the growth rates for turnover in the services industry for all quarters of 2020 and 2021.
In the second quarter of 2020, total services turnover was reduced by 18.1 % in the EU and by 19.3 % in the euro area. The strongest decline during the second quarter was recorded in Portugal (-36.8 %). In no country, apart from Luxembourg, was there an increase in services turnover between April, May, and June. Transport services in the EU declined by 20.2 %. The strongest reduction in this sector was also recorded in Portugal (-40.5 %). Accommodation and food services saw a decline of 58.0 % in the EU. Particularly strong reductions were registered in Malta (-90.4 %) and in Spain (-78.2 %). 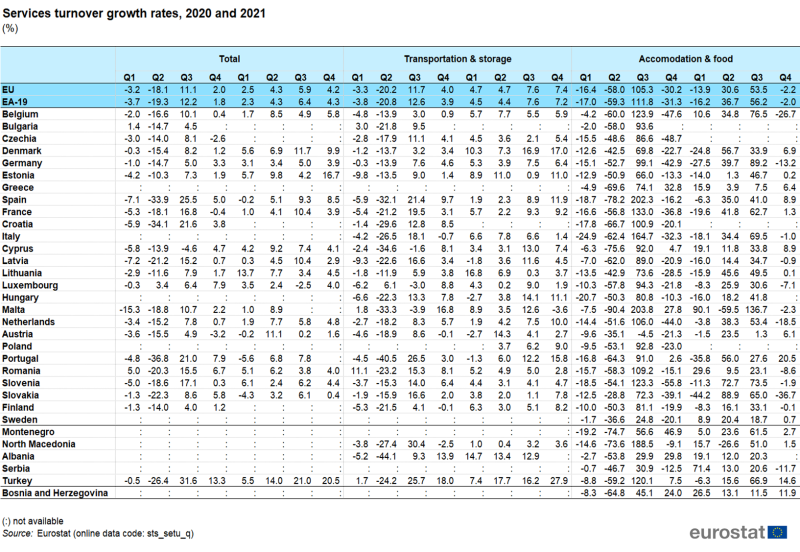 The turnover of information and communication services in the second quarter of 2020 dropped by 4.0 % in the EU. A few countries even recorded positive rates of change for these services. For professional, scientific and technical services, the overall rate of reduction in the second quarter of 2020 was 11.4 % in the EU. The turnover in administrative support services dropped by 27.1 %. 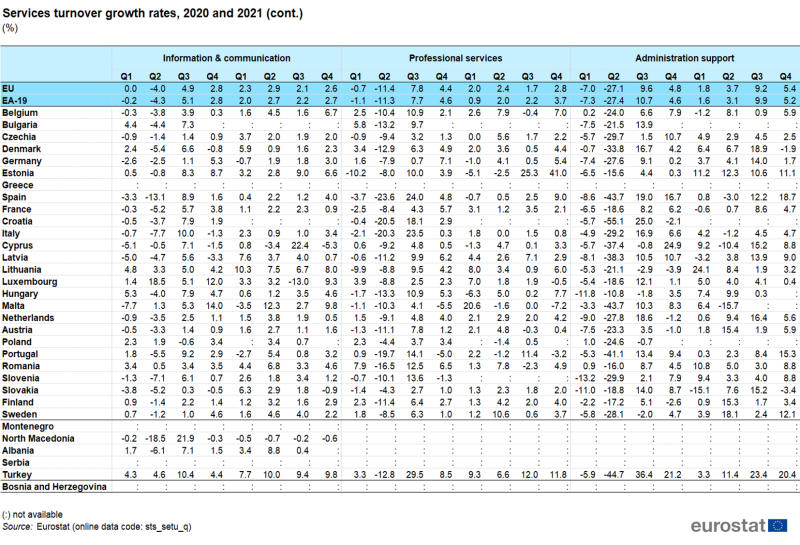 In the third quarter of 2020, in almost all countries and service industries, growth rates were positive. For services in general the European growth rate was 11.1 %, the highest growth was recorded in Spain (25.5 %) and in Portugal (21.0 %). The only decline was recorded in Cyprus (-4.6 %). After the severe declines in the second quarter, accommodation and restaurant services saw high growth rates in the third quarter of 2020 which were to a large extent due to the extremely low level that activities had fallen to; for the EU, the growth rate was 105.3 %. Transportation services augmented by 11.7 %. Information and communication services increased by 4.9 % in the EU, professional services by 7.8 %, and administrative and support services by 9.6 %.
The positive trend in the third quarter of 2020 continued in the last quarter of 2020, however the development was much less dynamic. Services in total increased by 2.0 % in the EU. Transportation and storage services recovered by 4.0 %, information and communication services by 2.8 %. The turnover of professional and scientific services increased by 4.4 % and the turnover of administrative services by 4.8 %. The exception to this positive yet moderate growth were accommodation and food services. Hotel and restaurants were severely hit by the renewed containment measures in the last quarter of 2020 and their turnover dropped by 30.2 % in the EU. The losses were particularly strong in Slovenia (-55.8 %) and in Czechia (-48.7 %).
In 2021 the overall positive trend consolidated and continued albeit with an even lower dynamic. Over the whole year total services turnover increased by 12.9 % in the EU. Transportation and storage services grew by 17.9 %, information and communication services by 10.1 %. Growth rates for professional, scientific and technical services (9.9 %) and administrative and support services (10.7 %) reached similar levels. Accommodation and food services augmented by 18.1 % in 2021. This increase was, however, not enough to compensate the losses of 2020 (-38.9 %).

Currently, monthly data of services production are not part of the STS-Regulation. Service production data are provided on a voluntary basis by some Member States or are estimated by Eurostat where the availability of turnover and price data allows this. According to the STS-Regulation the quarterly services turnover index is published 60 days after its reference months.

The Covid-19 crisis posed severe problems for data collections, since for example closed shops could not be reached or did not supply any data. Moreover, it was not clear if missing data might not be due to businesses being permanently closed. As a consequence, it may be expected that revisions of the first services data could be subject to greater revisions than is usually the case.