Industrial production in the EU increased by 0.4% in January 2022 compared with the month before; the total production level is now 2.5% above the level of February 2020, the month immediately before the Covid-19 crisis. 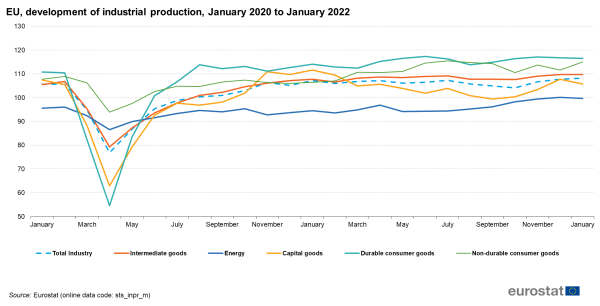 This article is part of an online publication presenting the development of short-term business statistics (STS) indicators in the Covid-19 crisis. The results presented in this article concern the development of the industrial production index. For the publication of new data see the STS release calendar. Please also see the monthly Eurostat News Release 101/2022 of 14 September 2022.

Covid-19 infections have been diagnosed in all European Union Member States. To fight the pandemic, EU Member States have taken a wide variety of measures, including restrictions on travel into the EU and between EU Member States, cancellations of public events, restrictions on private gatherings, closing of schools, bars, restaurants, hotels and many shops. The large majority of the prevention measures were taken during mid-March 2020. Most of the prevention measures and restrictions were kept throughout the whole of April. In May, several of the measures were abandoned, or at least reduced in scope and severity, which had a strong effect on industrial production. This recovery effect continued in June and to a lesser degree in July. With increasing Covid-19 cases after the summer holidays, several countries re-introduced some containment measures in September and October. The measures were further increased in November. In December, several countries relaxed the measures during the Christmas season. But in many countries containment measures were relatively strict in the early months of the year 2021.

In January 2022, industrial production in the EU increased by 0.4 % compared with the previous month; in the euro-area industrial production remained unchanged. The increase in the EU in January followed an increase of 1.0 % in December 2021 and of 2.5 % in November 2021. In the late summer and autumn of 2021 negative rates of change had prevailed. As a result of the relatively stable growth rates in recent months, and despite the relatively modest growth performance in the earlier months of 2021, the January 2022 industrial production stands at a level of 102.5 % of what it had been in February 2020, i.e. just before the Covid-19 crisis.

For comparison, Figure 2 shows how the various industrial groupings developed on average during the years 2010 – 2019 (to make the various index levels comparable, all years have been re-referenced to an average of 100). With the exception of energy production, all MIGs see an increase between January and May and some decline in June due to the beginning of the summer holidays, the months with the strongest growth usually being March and May. During the rest of the year the production levels remain relatively stable. As can be seen, the average changes in the index value are clearly below one point.


In comparison with the global financial crisis, the Covid-19 crisis affected the various industry groups in a much more drastic and severe way. Within only two months, between February and April 2020, the index for total industrial production dropped by almost 29 points, the index for durable consumer goods was halved, the index for capital goods dropped by more than 40 points. The declines in the early months of the pandemic are by far the largest monthly falls recorded since the start of the time series, significantly higher than the losses seen in late 2008 and early 2009 months, during the financial crisis. Overall, industrial production in the euro area and EU fell in April 2020 to a level that it had already reached in the 1990s. 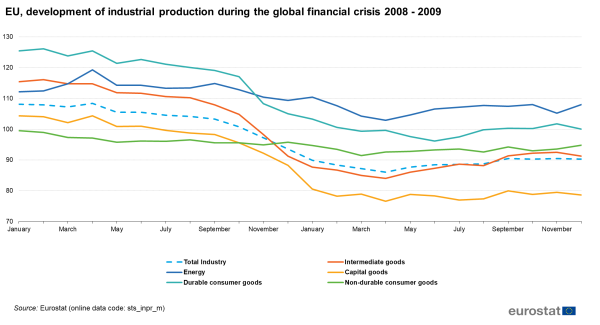 Figure 4 provides an overview of the development of the various industries between January 2020 and January 2022; within these two years there occurred several changes in the relative significance of the various industries. The production of coal and lignite increased by about one third. An increase of over 30 % was also recorded for pharmaceutical products. Strong declines in production levels were in particular recorded for textiles and clothes (-24.8 %), for the extraction of petroleum and gas (-17.4 %), motor vehicles (-16.2 %), and leather products (-15.8 %). Total industrial production increased by 2.6 % within the two years. 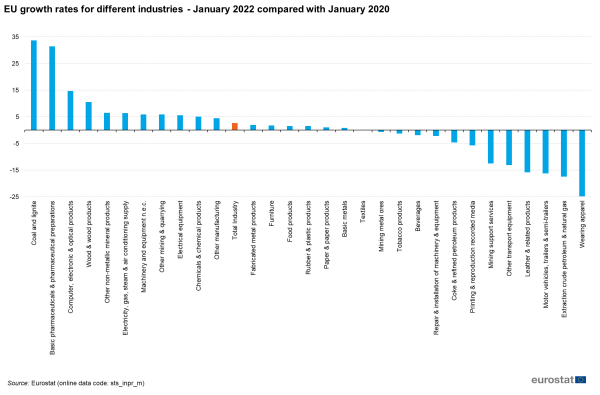 Most industries have regained their pre-crisis level of February 2020, some are now even considerably higher. Industries that have clearly surpassed the pre-crisis level of early 2020 are for example computers and related products, and pharmaceuticals. Industries with a level of production below that of February 2020 are for example motor vehicles and other transport equipment, as well as wearing apparel.

Since the Covid-19 containment measures differed between countries as to timing and strictness, it was to be expected that the effects on industrial production would also vary. Table 1 shows the rates of change between February and April 2020 (peak of the crisis), April 2020 and January 2022 (ongoing recovery) and the recent monthly rates for January 2022 compared with December 2021. During the peak months of the crisis, Italy, Slovakia, Cyprus and Hungary experienced extremely high negative rates of change. These countries generally also showed high rates during the recovery months since May 2020. In some other countries the crisis seemed to have little or no effect on industrial production. Between February 2020 and April 2020, production grew in Ireland by 10.2 %, in Finland industrial production remained stable. The majority of countries, however, experienced rates of change of around -25 %. 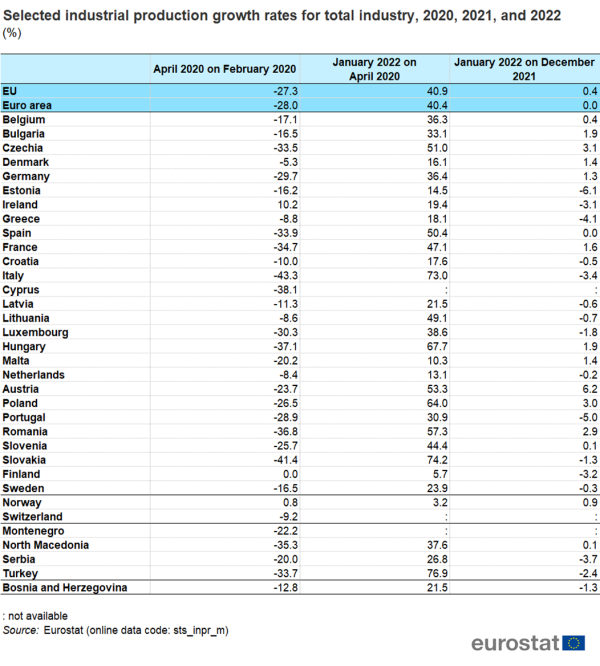 The overall growth since last summer has been, for several countries, sufficient to recover most losses during the most acute phase of the Covid-19 crisis. Table 2 shows the degree of recovery for the EU countries and the various main industrial groupings (MIGs).

Seventeen EU-countries (Lithuania, Ireland, Poland, Austria, Belgium, Bulgaria, Denmark, Latvia, Greece, Slovenia, Croatia, Finland, Hungary, the Netherlands, Sweden, Slovakia, and Czechia) have regained or surpassed the pre-crisis production level. Industrial production in Ireland is even one third higher than before the crisis. Several other countries are already rather close to the 100 %-mark (Spain, Romania, Italy). In Malta and Germany production levels are still comparatively low. 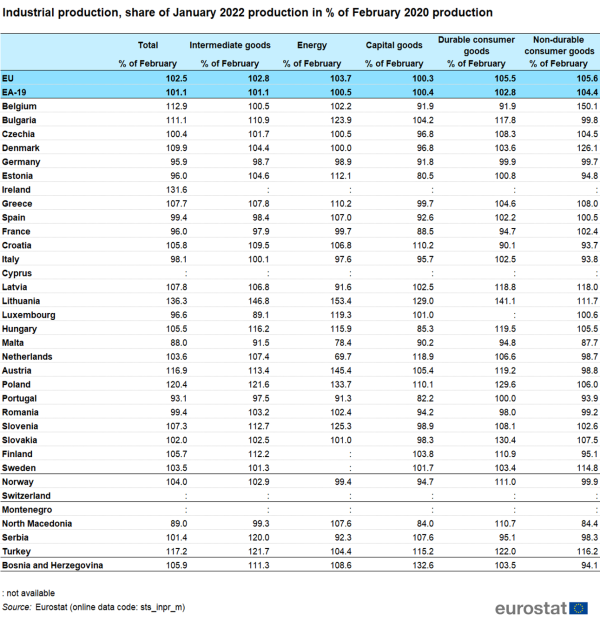 According to the EBS-Regulation and the EBS-Implementing Regulation the industrial production index is published only 45 days after its reference months. At this early stage it is normal that no complete coverage of data can be ensured by National Statistical Institutes and that data have to be estimated to some degree. As a consequence, revisions occur during the publications that follow.

The data in this article are, for several Member States, based on fewer statistical observations than usual or alternative sources. For missing data, imputation and estimation methods were applied. Information on the compilation of short-term business statistics during the Covid-19 crisis can be found here and (specifically for STS) here.