Impact of Covid-19 crisis on construction

This article is part of an Eurostat online publication presenting the development of short-term business statistics (STS) indicators in the Covid-19 crisis. The results presented in this article concern the development of the construction production index. For the publication of new data see the STS release calendar. Please also see the monthly Eurostat News Release of 18 August 2022.

Covid-19 infections have been diagnosed in all European Union Member States. To fight the pandemic, EU Member States have taken a wide variety of measures, including restrictions on travel into the EU and between EU Member States, cancellation of public events, restrictions on private gatherings, closing of schools, bars, restaurants, hotels and many shops. In Italy and Spain, non-essential production was stopped but the imposed measures in general had a negative effect on demand and thus on production in many areas.

With increasing Covid-19 cases after the summer holidays, several countries re-introduced some containment measures in September and October. The measures were further increased in November. In December, several countries (partially) lifted the measures during the Christmas season. In January and February, containment measures were re-introduced or increased in many countries due to rising infection rates. Since spring 2021, measures have gradually been rolled back.

In general, the strictness, lengths and nature of the Covid-19 measures in the EU has been relatively heterogeneous. In early 2022, many measures were further reduced or even phased out. The Covid-19 measures clearly affected the construction production in a number of countries and also impacted the European aggregates.

Development of construction production in January 2022

While construction production showed strong growth in May 2020 (20.4 %), the growth during the subsequent months was only moderate and only recently have the losses from the crisis been recovered. Currently, the level of construction activity in the EU is about 101.9 % of the level in February 2020 (euro area also 101.5 %).

Figure 1 shows the development of construction activities between January 2020 and January 2022 for total construction, buildings and civil engineering.

The development in early 2020 was quite unprecedented. For comparison, Figure 2 shows the average monthly development of total construction, building construction and civil engineering works for the years 2010 – 2019 in the EU (to make the various index levels comparable, all years have been re-referenced to an average of 100). On average, the construction indices drop about one or two index points between January and February to regain the former level in March and surpass it in April and May. With the beginning of winter, construction activities are then again somewhat reduced. The index changes between the months are about one point. 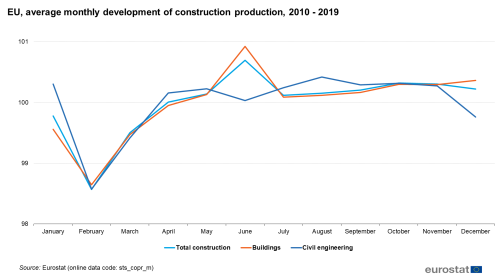 Between February and April 2008, the index for total construction in the EU fell by 6.6 points (the buildings-index fell by 5.8 points, the index for civil engineering works by 9.0 points). In the months that followed, the total construction index and the sub-indices dropped again, although the reductions were generally smaller and there were also occasional increases. Over the following five years (until spring 2013), the construction index was, however, on a clear downward trend, reaching its lowest level of about 95 points in March 2013. During these five years, the total construction index lost almost 33 points; only afterwards did it start to slowly recover, although without regaining its former peak of over 127 points that it had reached in February 2008.

During the peak of the Covid-crisis, between February and April 2020, however, the construction index had dropped by almost 30 points in the EU and by almost 35 points in the euro area. In other words: during the first wave of the Covid-19 crisis, the construction index lost about as much as during the five years in the aftermath of the economic and financial crisis.

Since the Covid-19 containment measures differed between countries as to timing and strictness, it was to be expected that the effects on construction production would also vary. Table 1 shows the growth rates for January 2022 compared with April 2020, i.e. generally for the ongoing recovery phase, and for April 2020 compared with February 2020, i.e. the peak of the crisis. The table also shows the rate of recovery, i.e. the ratio of the index levels of January 2022 and of February 2020.

The Covid-19 crisis was particularly strongly felt in Italy, France and Luxembourg, where construction activities fell by 71.5 %, by 63.9 % and by 55.0 % respectively between February and April 2020. In Italy, the recovery between April 2020 and January 2022 was quite strong (303.2 %) – mainly as a result of the extremely low index level of April 2020. By now the Italian construction production volume has clearly surpassed the pre-crisis level. In France, despite a high growth performance since the crisis, the production is still only at 97.6 % of February 2020 (no data for Luxembourg).

In several other countries where early lock-down measures had been less drastic, the construction activity dropped only moderately between February and April 2020 (e.g. Finland) or even increased (Denmark, Romania, Sweden).

In January 2022, only half of the 16 countries for which data are available had regained the February 2020 pre-crisis level of construction activities (Germany, Italy, Hungary, the Netherlands, Poland, Romania, Finland, Sweden). Some countries are relatively close to the pre-crisis activity level (Bulgaria, Czechia, France, Portugal) while some countries (Belgium, Spain, Austria, Slovakia) are still more than three percent away from the former levels. It should be noted however that since the crisis, the ranking of countries in the recovery has changed from one month to the next to a considerable degree. 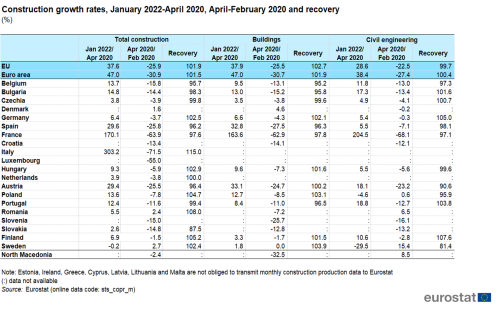 Figure 4 shows the two-years rate of change between January 2020 and January 2022 for those countries for which monthly data are available (different from the other rates in this article, these rates are calculated on the basis of calendar adjusted data.) 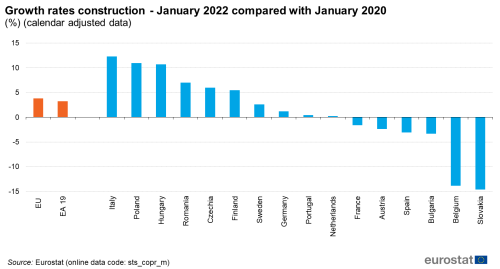 According to the EBS-Regulation and the EBS-Implementing Regulation the construction production index is published around 45 days after its reference months. At this early stage it is normal that no complete coverage of data can be ensured by National Statistical Institutes and that data have to be estimated to some degree. As a consequence, revisions occur during the publications that follow.