There were approximately 1.75 million practising physicians across the EU in 2020.

In 2020, more than half of all physicians in Italy and Bulgaria were aged 55 years and over.

More than two thirds of the total number of physicians in Latvia, Estonia, Lithuania and Romania were women.

The number of medical doctors graduating per 100 000 inhabitants rose in nearly all of the EU Member States. 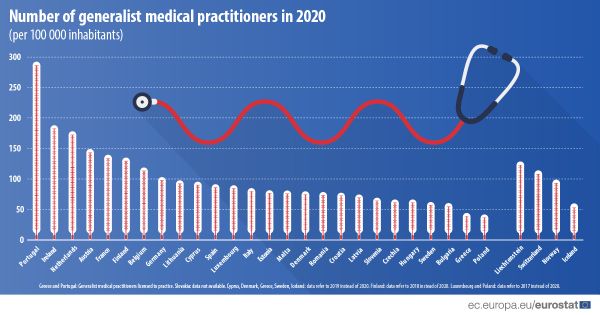 This article presents an overview of European Union (EU) statistics on physicians. It provides information on specialist healthcare personnel, as well as data on the number and ratio of graduates in this field (note that all physicians need to possess a degree in medicine).

In this article preference is given to the concept of ‘practising’ physicians which is also used for the European core health indicator (ECHI) on practising physicians. For some EU Member States data are not available for this concept and therefore data are presented for one of the alternative concepts instead: footnotes indicate these exceptions in each table and figure. 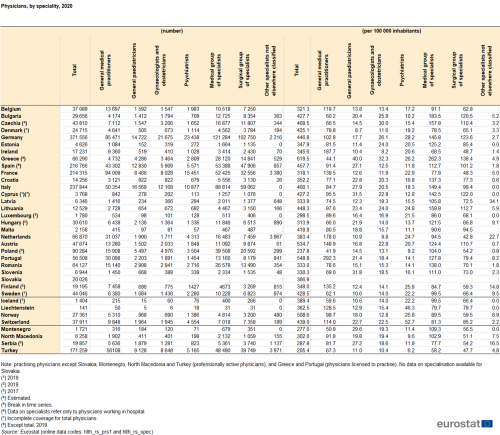 A closer examination of the data in Table 1 reveals that in 2020, there were approximately 454 000 generalist medical practitioners (GPs) across the EU. The highest number of GPs was recorded in France (94 000), followed by Germany (85 000), while Portugal (physicians licensed to practise) and Ireland reported the highest number of GPs per 100 000 inhabitants (292.3 and 187.7 per 100 000 inhabitants, respectively). 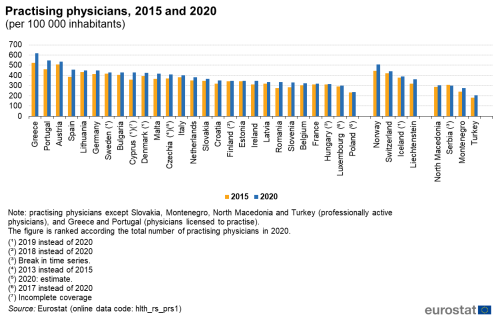 
Italy had the highest share of physicians aged 55 years and over
There has been a rapid ageing of the (healthcare) workforce across much of the EU as the baby-boom generation has started to reach retirement age. In 10 Member States, the share of physicians aged 55 years and over was over 40 %, while in Italy and Bulgaria this percentage was over 50 % (56.2 % and 53 %), respectively. In most of the remaining EU Member States for which data are available, the relative importance of this age group in the total number of physicians was between 22 % and 37 %. Conversely, the highest proportion of younger physicians (under 35 years) was in Malta (44.5 %), followed by Romania (34 %), and the Netherlands (31.4 %). 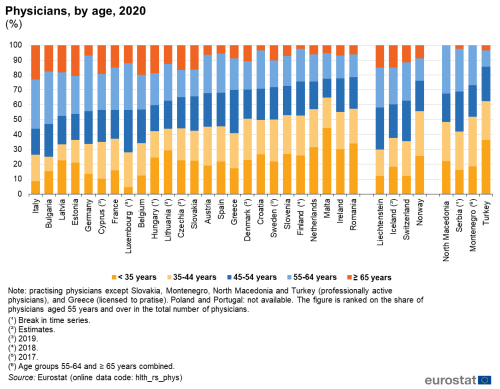 More than two thirds of the total number of physicians in Latvia, Estonia, Lithuania and Romania were women
The analysis presented in Figure 3 shows that there were considerable differences between EU Member States with respect to each sex’s share of the total number of physicians. Over the last decade, the overall proportion of female physicians has been gradually increasing. By 2018, there was already a slight majority of physicians in the EU who were female, and this proportion has risen even in the last 2 years, from 50.4 % to 51.5 %.

In 2020, a majority (17) of the EU Member States reported that they had a higher number of female (rather than male) physicians. In Croatia, Slovenia and Finland, more than 60 % of all physicians were women; in Romania and the Baltic Member States, this proportion increased to over 70 % , with the highest percentages of female doctors recorded in Latvia (74 %) and Estonia (73 %). By contrast, the highest share of male physicians (64 %) was recorded in Luxembourg, while relatively high proportions of male physicians were also recorded in Cyprus (62 %); Greece, Malta, and Italy (all within the range of 55-57 %). In Sweden, Austria and France the share of male to female physicians was less than 3%, with Sweden having the smallest gap between the sexes (less than 1 %).

Some EU Member States face concerns over a lack of supply in relation to the expected future number of physicians available to their healthcare workforces. This has led some to promote measures designed to encourage more students to pursue medical degrees. 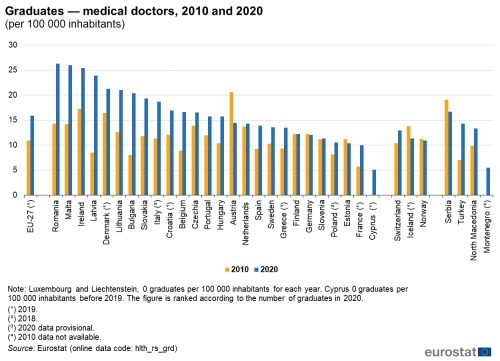 Practising physicians provide services directly to patients. They include people who have completed studies in medicine at university level and who are licensed to practise, be they salaried or self-employed, irrespective of the place of service provision. Unemployed physicians, retired physicians and students who have yet to graduate are excluded, as are physicians working in administration, research and other posts that exclude direct contact with patients.

Common definitions have been agreed between Eurostat, the OECD and the World Health Organisation (WHO) with respect to the employment of various healthcare professionals. Three main concepts are used to present this data; Eurostat gives preference to the concept of ‘practising’ physicians:

Data on physicians are classified according to the International Standard Classification of Occupations (ISCO); they are defined under ISCO 08 as code 221:

In the coming decades, population ageing is expected to be a major challenge for the EU’s health sector. The demand for healthcare will probably increase substantially as a result of an ageing population and at the same time the proportion of the people in work will probably decline.

As a result, staff shortages in certain medical specialisations or geographic areas may increase. In 2020, over a third of all doctors in the EU were aged 55 years and over.

The Commission has initiated different actions which seek to help EU Member States tackle this challenge, by improving workforce planning and forecasting, anticipating future skills’ needs and training initiatives under the EU4Health programme.