Highlights
Tweet
Close to 5.3 million passenger cars and light goods vehicles were scrapped in the EU in 2017.
Tweet

The total number of end-of-life vehicles reported in the European Union reached 5.3 million in 2017, sharply up from the 4.8 million recorded the previous year, and the highest since 2011 (see Table 1). However, the number of end-of-life vehicles was still well below the levels recorded in 2009 (7.7 million) and 2010 (6.2 million), when national scrapping schemes introduced in the context of the financial crisis stimulated the dismantling of older vehicles. Three Member States established scrapping schemes in 2008, twelve in 2009 and one in 2010.[1] 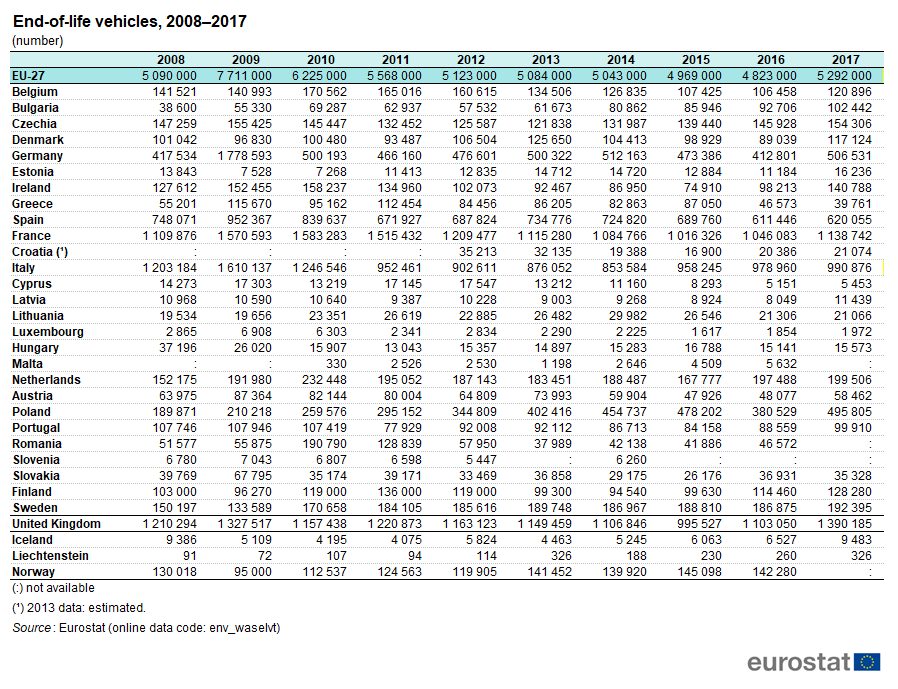 During the period 2015-2017, EU Member States were required to meet rates for reuse and recycling of ≥ 85 % and for reuse and recovery of ≥ 95 % by an average weight per vehicle. The reported rates are shown in Tables 2 and 3. 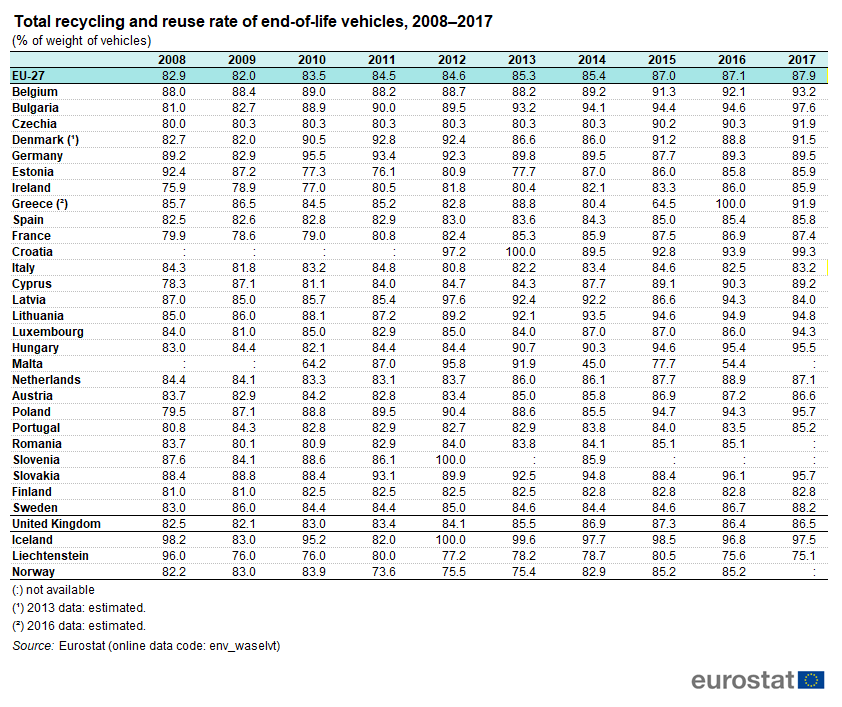 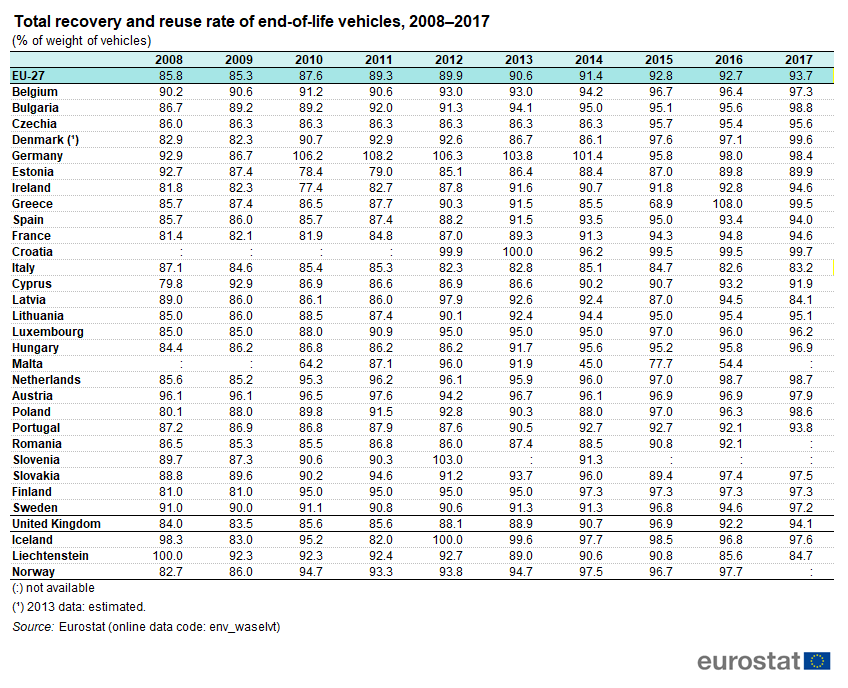 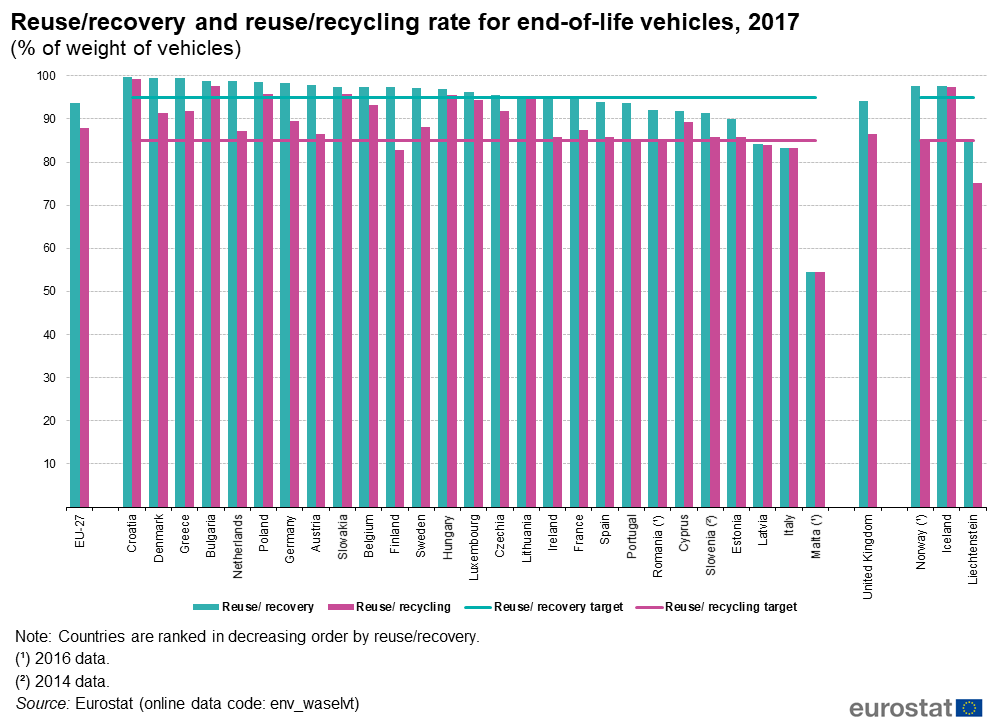 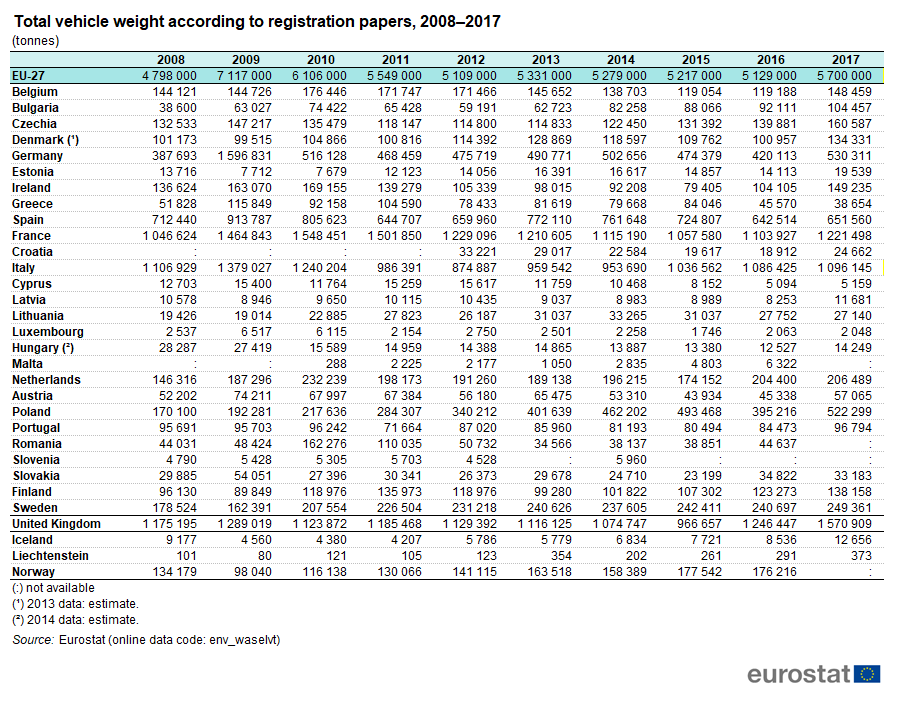 The methodology including a guidance document aimed at harmonising the reporting and improving comparability is available; however, some inconsistencies remain and not all detailed figures reported are directly comparable. Some selected aspects regarding comparability are highlighted in the following paragraphs.

During the course of the late 1980s and early 1990s EU Member States were facing several challenges in the waste processing of end-of-life vehicles, therefore Directive 2000/53/EC and Commission Decision 2005/293/EC provide measures to reduce environmental harm due to inappropriate depollution and disposal of car bodies:

Summarising, the definition of recycling differs between Directive 2000/53/EC on end-of-life vehicles (ELV directive) and the WFD due to the different classification of backfilling. In the ELV directive, backfilling is part of the recycling waste management operations; in the WFD, backfilling is excluded from recycling and is only included in recovery waste management operations. These definitions are used for calculating the target rates monitored in the Directive 2000/53/EC on end-of-life vehicles.

No exemptions or transitional periods are in place, thus countries of the EEA have to comply with the targets.

The Directive 2000/53/EC on end-of-life vehicles is curently being revised.